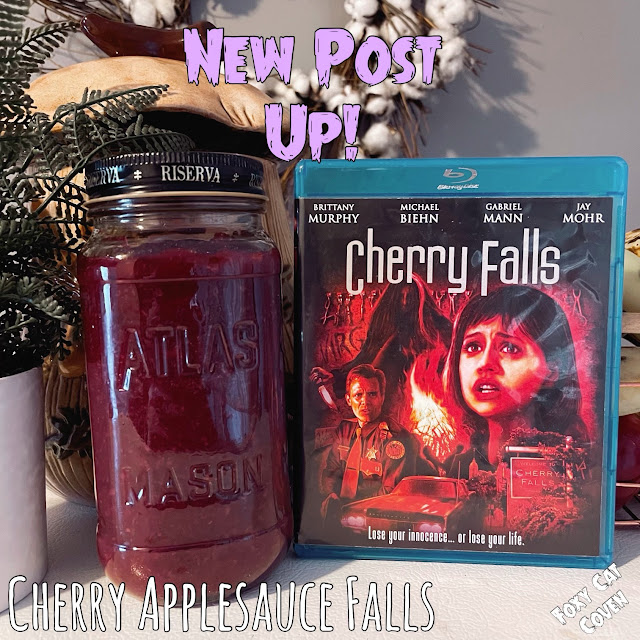 Sara: Happy Monday, Creeps! Today we are going to talk about one of our favorite slasher flicks, and my quarantine project. For whatever reason, we decided to check out Cherry Falls (2000) around Valentine's Day a few years ago, and it has become a February must-watch ever since. A small town being terrorized by a psychotic murderer killing high school virgins? It kinda has a Valentine-slasher tune to it. We decided to pair this flick with a twist on a favorite in this coven: cherry applesauce!

What I really love about this movie, is all of the actors in their early 2000's glory. Brittney Murphy is the baby-faced epitome of a virgin taking the lead role, while her douchebag, gaslighting boyfriend Gabriel Mann looks like he walked off of this set right onto Josie and the Pussycats (2001).  Jay Mohr is a fresh-faced, 25 years young teacher-much younger than any English Lit teacher I have ever been blessed with. Which makes sense, as there is a lot of emphasis on how young the cast is. Brittney Murphey is shown riding a bike as her means of transportation, as opposed to her peers driving cars, her best friend is too nervous to talk to a guy she likes, there's a food-fight in the cafeteria, all very innocent aspects of adolescence. And in true teenager fashion, the youth of the small town of aptly named, Cherry Falls decide to throw a Pop your Cherry Party at an abandoned house in attempt to lose their virginity and deter the lure of the killer. If that isn't enough to peak your interest, there's the dialogue. With beautifully written one liners like: "Holy hymens, Batman! Their killing virgins!" you have to give this one a viewing, if you haven't seen it yet. 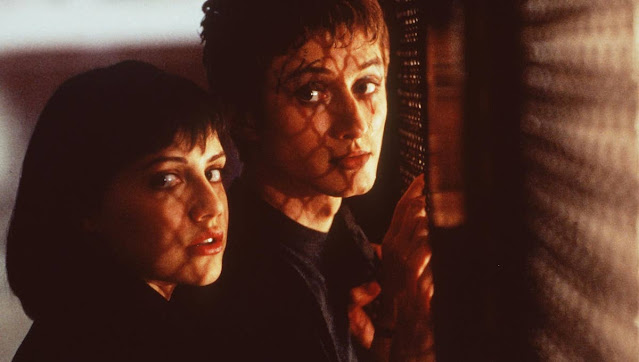 Jeremy: I don't remember how Cherry Falls was first introduced to me, but the twist on a familiar trope, the killer going after virgins, with a genuine mystery and Twin Peaks-esque town had me hooked before even pressing play. And lets be honest, this came out in that magical year of 2000, when absolute gems like Blair Witch 2: Book of Shadows were hitting theaters and dazzling audiences everywhere, of course I was gonna love it. What surprised me as well, was that the gore in this film, as well as the body count, seemed to buck the trend of a lot of films at the time by not completely holding back on the goods. The killer even goes on a brief killing spree that was both awesome, and gave me A Nightmare on Elm Street 2 vibes with its quick, and merciless brutality during what was originally going to be a more sexually explicit scene (originally envisioned as an orgy, as the students attempt to remove themselves as targets of the killer).
Maybe this is why the film was never picked up for theatrical distribution in the US, due to the aforementioned gore, and its implied sexual content. But luckily for fans of the film, Scream Factory put out an excellent Blu-Ray release of the film several years ago that I absolutely recommend picking up for as long as it's still available. As far as I know, the only other way to see it is on a VHS copy that I can only imagine is the equivalent of me filming the whole thing myself.

Sara: My first attempt at making homemade applesauce was actually a couple of years ago, mostly because I had wanted to use the crockpot and I thought it might make the apartment smell like fall. I realized it was easier to just make it on the stove, and for whatever reason it became one of my weekly quarantine activities. Last month I had decided to throw some strawberries that we had leftover in it, and it came out great. So for Cherry Falls, I decided to try my hand at cherry applesauce!

1 bag of apples of choice (ours was a 5lb bag of fuji), pealed, cored, and chopped

Throw everything together in a large pot on high with the lid on until it boils (usually happens pretty quickly), then turn the heat down to low, leaving the lid on, stirring occasionally. Cook until apples are soft enough to mash with a fork, then either mash with a potato masher or blend the contents in a blender. You can also add small amounts of water beforehand to desired consistency. I usually leave it thick and lumpy, but I blended it to make it look prettier for the photos. Stick applesauce in jars or containers and let cool. Bonus: the cherries kind of make it look like blood.

Jeremy: And that's all the time we have for today! We both are a huge fans of this film, if it isn't apparent by everything we've already said, and the more eyes Cherry Falls gets, the better. This is our last post for the month of February, but we're looking forward to next month and another batch of horrors for you to sink into. But until then, keep it creepy!