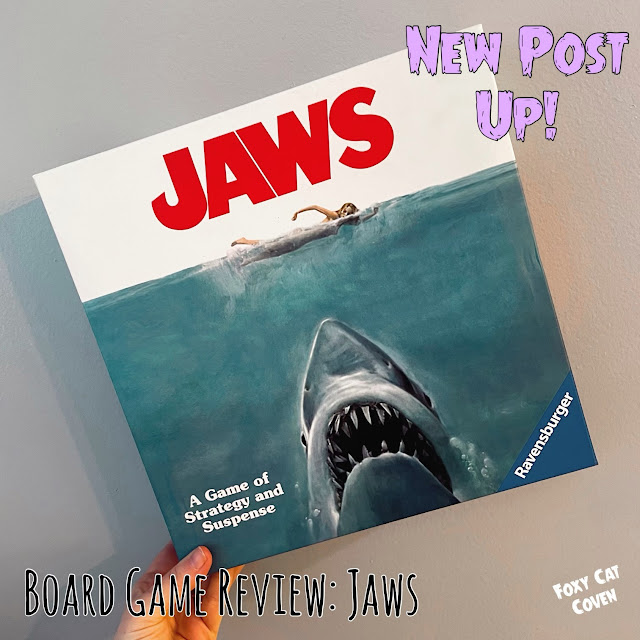 Jeremy: As I type this, it's once again beginning to snow after an entire weekend of the stuff. And what better combination than a pandemic and snow storm to give you reason to bust out some board games, playing as a titular shark, and killing all of your closest friends! Because while this weekend was spent bundled up, trying to beat the cold oppressive weather outside, indoors we were taking a trip out to Amity Island and the summer where a shark, who we'll call Jaws, went batshit crazy on some unsuspecting beach goers.

We picked up Jaws: The Board Game for our friend Miranda about a week ago, and took little time to dive into it for the first time over this last weekend. The primary objective of this game is to hunt down Jaws, attaching barrels to track him, ultimately leading to a final confrontation on the Orca, the scene of the climactic final battle from the movie. You're given a choice of three characters, Brody, Hooper, and Quint, with the fourth player taking on the role of Jaws. Each character, as well as Jaws, comes with their own set of special abilities, with the three human characters needing to play off the others strengths to locate Jaws. The game occurs in two rounds, the first at Amity Island, where the heroes attempt to attach two barrels to Jaws, whose location on the map is invisible, save for when an ability is used at the right time to reveal Jaw's location. In the meantime, swimmers are randomly placed across the map with each new event card. These swimmers must be saved by any of the three heroes because, if Jaws manages to eat nine of them, the round will automatically end, and Jaws will be given an advantage for the second round. 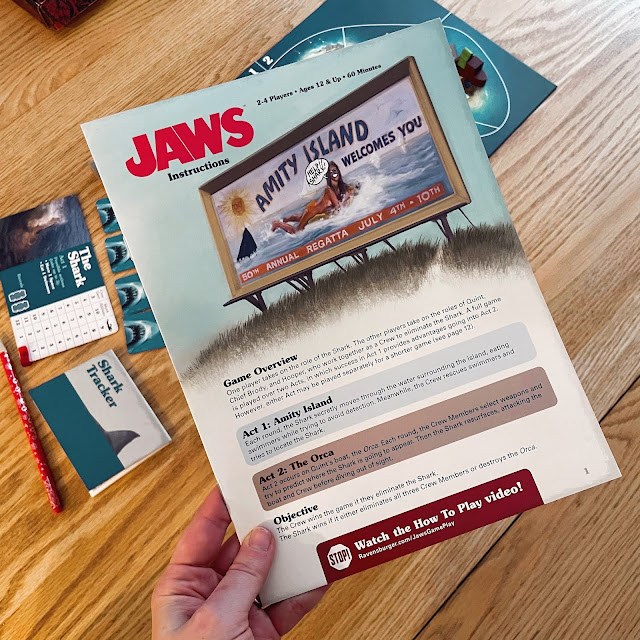 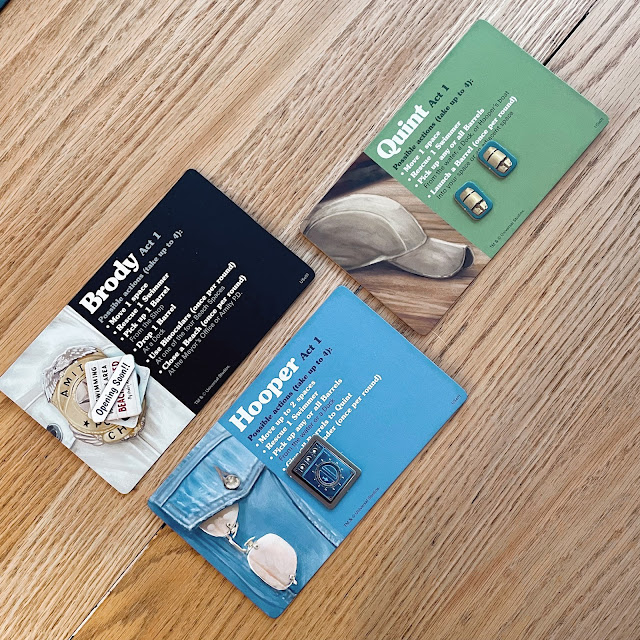 The second round takes place on a ship, the Orca, where the heroes are equipped with a number of weapons based on how quickly they managed to track Jaws in the last round. Meanwhile, Jaws randomly shows up each turn at random locations next to the boat to either attack it, or any nearby hero, while the hero attempts to get an attack in themselves. Play here ends when Jaws has either killed all three heroes or they have successfully done enough damage to Jaws to send him to his watery grave.

One of my favorite things about this game is the two round system! With two completely different ways of playing for each side of the board, I thought this was a clever way of extending the replay value of this game. While more than a bit of clever thinking is needed on both sides, I found that those who play as Jaws are given more than enough tools to take down three players on their own. I played as Quint and I found that his more hands on ability of being the one to release the barrels was more my style, and a character I would gravitate towards in future playthroughs. Overall, a great homage to the film, and a great way to further illustrate that Jaws is a dick. 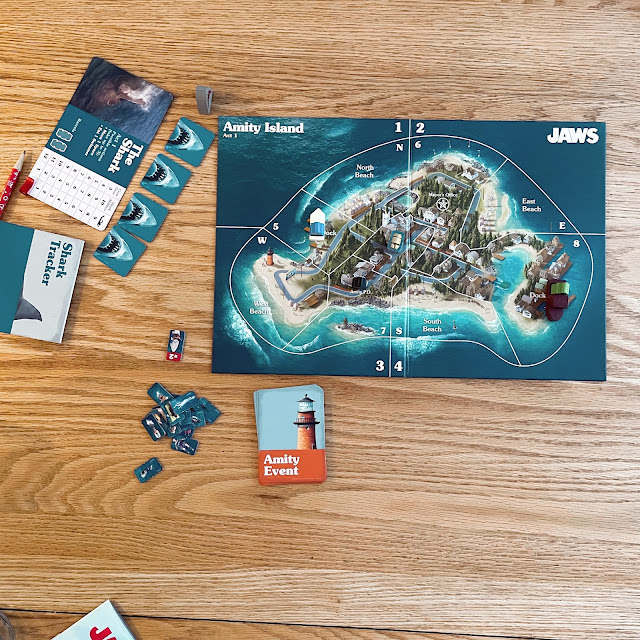 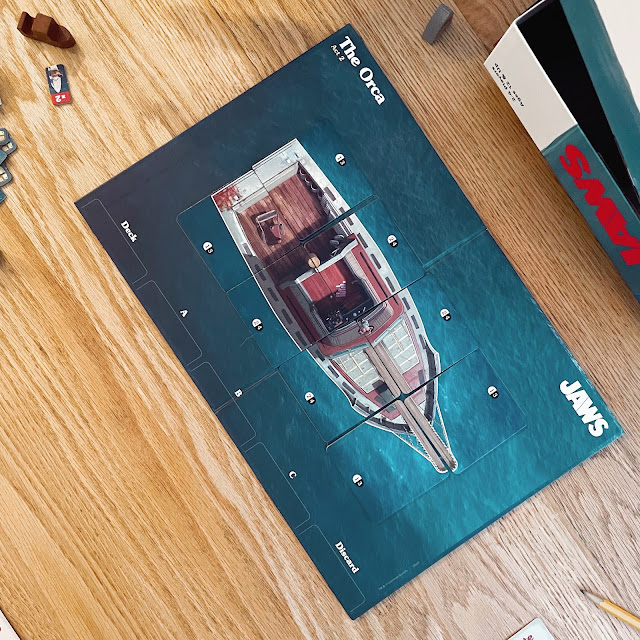 Sara: The best part about the two round system is that players can choose to play each round on their own as a game, or both of them together as a longer game. Because it was our first time playing, it took us a moment to find our footing and strategize against the shark, which wasn't easy. However, after a few rounds we were able to get a better idea of how the game worked. I personally recommend playing the game twice, as the second round can change depending on how well players perform in the first round, which leaves even more options to this game. I also recommend listening to the Jaws album by John Williams on loop while playing, it helped us forget that it was 11 degrees outside, at least for a few moments.

This Friday is The Last Drive in: Joe Bob Put a Spell on You, Valentine's Day Special. We will be tuned in via Twitter, so be sure to join the fun. We are already plotting out what toppings we are getting on our heart-shaped pizzas for this event, if only we could get our claws on some Lonestar beer. We are also planning on making our way through our favorite stack of Valentine's Day horror flicks, which include both My Bloody Valentine's, as well as Valentine (2001), because its just such a fun one. We also almost always add Cherry Falls (2000) to the list, even though its not technically Valentine's Day themed, because of its slasher-goodness.

Thursday, February 18th is our Foxy Cat Coven February Netflix Party! We will be sending out the links about 15 minutes before the flick, which we will start at 9pm, EST. This month we will be watching Creep (2014), so be sure to keep your calendars open and join the fun! Until then, keep it creepy, kids!