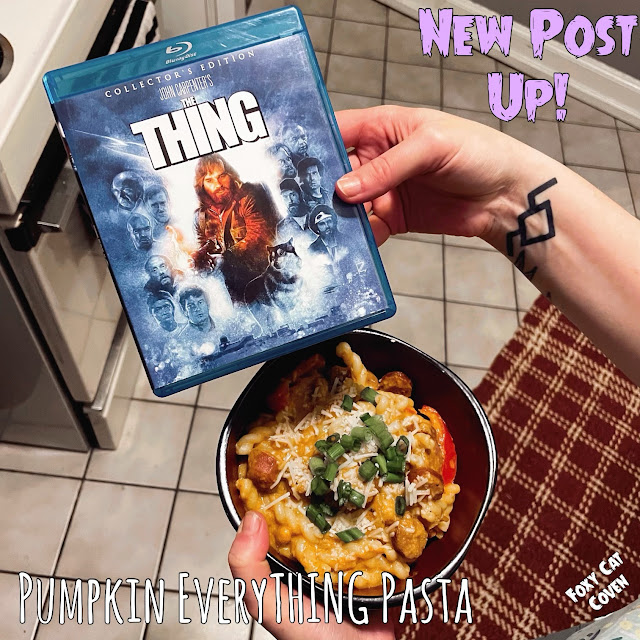 Jeremy: Hello again, creeps! It's been a bit since we've hit you with one of our recipes paired up with a movie, and with us currently in the thicket of snowy days upon snowy days, we found that this recipe for Pumpkin EveryTHING Pasta was the perfect cure for chilly days. In what may be our greatest play on word of all time, we naturally chose 1982's The Thing to represent both this time of year, and a way to come up with a title for this post. But first up! I'm here to talk a little about the plot of this masterpiece for the one in one millionth person who hasn't actually seen or heard of it.

The Thing, a remake of the 1951 film and novella The Thing From Another World, follows a group of American researchers in Antarctica who, after the arrival of a husky from a neighboring outpost, begin to discover that not everyone in their ranks can be trusted, as each of them are assimilated by a parasitic extra-terrestrial life form. Featuring some of, if not the best, practical effects of director John Carpenter's career, this one is a particularly nasty flick that gets featured in many of those "top gross out moments" lists. And while there's plenty of chaos to go around here, where The Thing's primary strength lies is in its ability to invoke a feeling of isolation and dread that is matched by few films to this day.

The Thing is one my favorite Carpenter films, at the very least it always sits in my top three of his on any given day. It's scary, it's visually breathtaking, and it knows how to deliver on the violence while still leaving room to make you think it's okay to breathe. In what seems to be a relatively small list of winter horror films (save for the many Christmas ones out there), The Thing is a must not miss classic. I'd even go far as to say check out the 2011 prequel as well. While it may add nothing to the story, and features some pretty awful effects, I can still appreciate it's attempt to remain within the same world as Carpenter's film. Still bums me out though that as of last year they are still trying to make another remake of this story when, let's be honest, how could it be done any better or have anything else to say?

Sara: The Thing is probably my favorite winter horror next to The Shining, and one of the few all-male cast films that I actually enjoy. What can I say, Kurt Russell is a babe, and despite the dog-horror-movie fiasco, I really love this movie. It's one of those films that linger with you, especially in the middle of winter.

What better to sooth your icy gut than a hot bowl of Pumpking EveryTHING Pasta! This recipe is one that I kind of winged about an hour before we sat down to do this post, its a good thing that it came out well, right? What started out as a regular pumpkin pasta recipe that our friend Miranda had us try out one night, became transformed into something familiar-yet strangely delicious. 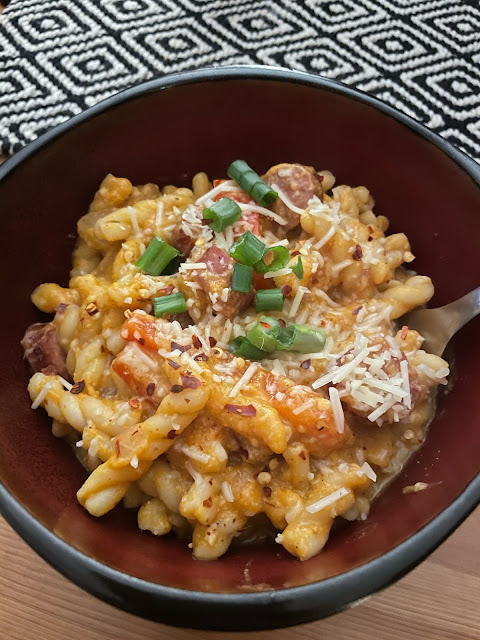 2-3 garlic cloves, minced (I used about 3x this amount)

Cook pasta according to directions, reserve pasta water, drain. While pasta cooks, heat a bit of olive oil in a large skillet with chopped onion, the white part of the green onion, garlic, and sliced sausage. Cook until sausage starts to brown, then add in the chopped bell pepper. Add sausage mix to pasta, cover to keep it warm. Next, heat up a little more olive oil in the same large pan, and add some more garlic. Add the pumpkin and pasta water, combine while heating up until a smooth paste forms. Add in milk, half and half, nutmeg, salt and pepper to taste. Once heated through, add in 1 1/2 cups of parmesan, until dissolved. Add pumpkin sauce to the pot with pasta and sausage, combine well. Scoop into bowls and sprinkle more parmesan on top, and some green onion. We added red pepper flakes at the last second, 10/10 do recommend.

There you have it, a yummy dish full of everything we had in the fridge to pair with a winter classic. Fan of The Thing? Think this dish looks a bit strange? Let us know your thoughts! Leave us a comment below, or on any of our social media platforms @FoxyCatCoven. Drop us a line at FoxyCatCoven@Gmail.com, or join our Facebook group: Coven Creeps, located right on our Facebook Page. Until next time, keep it creepy, kids!