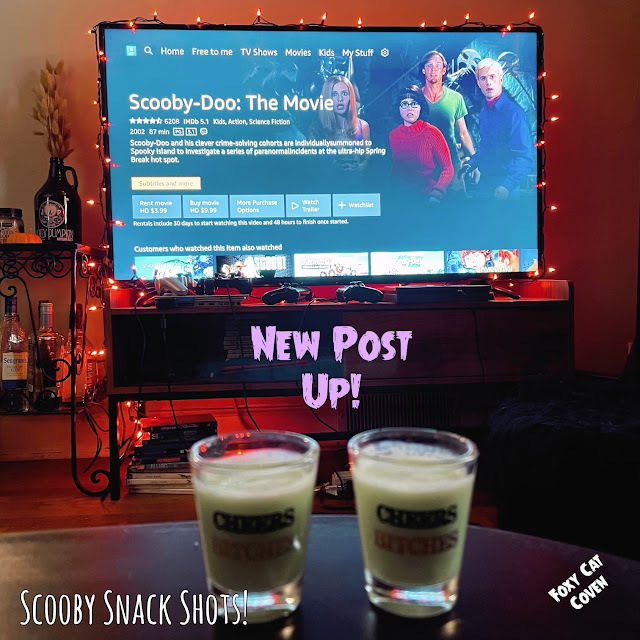 Jeremy: Hello again, Creeps! It’s been a bit since we’ve brought you a recipe that can be paired with a movie, but inspiration struck last weekend, and today we’d like to introduce to you a Scooby Snack Shot! For the one in a billion people who don’t know, this is inspired by the Scooby-Doo franchise, in this case with the 2002 film of the same name.

Despite being a film that is damn near twenty years old and has seemed to have been seen by every single person in my age group, I had never actually seen this movie until just a week ago. Sure, I grew up with the show and a couple of its variations over the years, as well as several of the animated films (Zombie Island, especially), but I’ve got to be honest when I say I took one look at CGI Scooby-Doo and cringed as I disregarded the whole thing for years. Now that I’ve finally taken the opportunity to sit down and give it a chance, I think it’s safe to say I was wrong, this movie was a whole lot of fun, with a cast that couldn’t be more perfect for filling the roles of the members of Mystery Incorporated.

While it’s no masterpiece, Scooby Doo 02’ captures the feeling of the original show perfectly, feeling as though it could have been an extended episode itself. And while I’m not going to say that it’s a movie that’s best to be intoxicated during, the combination of the shots we’ve provided here, plus the non-stop action of the film, really do mix well together. As for the second film in the franchise? I made it about fifteen minutes and fell asleep, so take that bit of advise whatever way you will.

Sara: Since the holidays are around the corner, which goes hand-in-hand with alcohol, we figured pairing Scooby Doo with a shot would be a decent little adult Scooby Snack to get you through this 2002 masterpiece. Also, it's green, its kinda festive, right? Right. Here's what you'll need for your Scooby Snack Shots:

Shake contents together with ice, the pour into shots. Easy-peasy! We also tried this shot with plain almond milk instead of heavy cream and it was just as yummy. Because of the coconut and pineapple, this would be perfect in the summer, but hey, we wanted a bright green shot.

This week is our Foxy Cat Coven November Netflix Party! We will be starting at 9 pm, EST this Thursday evening so send us a DM that day to let us know you'd like to join and we will send a link out 20 minutes or so before the flick! We usually give an extra few minutes for stragglers, but in order to help get things going on time, just have Netflix Party downloaded on Chrome, and we will send you a link to the party. Oh yeah, and we will be watching M. Night Shyamalan's The Village from 2004! It just has that perfect late-fall vibe to it, and we are still in BooVember mode so this seems very fitting.

Have you revisted the Scooby Doo movies from the early aughts? Wanna shoot us your thoughts on the Scooby Snack Shots? Have another spooky drink we should try? Hit us up! Either with a comment here, or on any of our social media @FoxyCatCoven. Until next time, keep it creepy, kids!