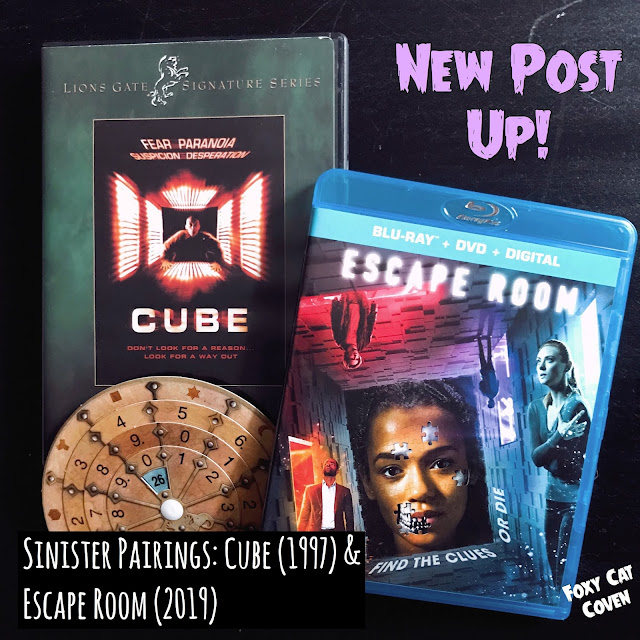 Jeremy: Greetings once again, creeps! If there's something we haven't brought to you in quite some time, it's been a post talking about one of our favorite things: Double features! For this month we decided to bring to you a pairing of 1997's Cube, along with 2019's Escape Room. A pairing that has been on our mind ever since leaving the theater for Escape Room early last year. And while the similarities seem to be readily apparent from the puzzle solving, to heroes changing sides, to some shady organization shit, Escape Room does have its fair share of quirks to set it apart from its predecessor in multiple room mayhem, Cube. But first, for those who have yet to dive into these two brain-buster films, lets talk a bit about the plot of each...

Cube begins by throwing us right into the thick of things, kicking off with the first casualty of the film (A scene that Saw (2004) seemed to have taken some inspiration from) before introducing us to the main cast of the film. They find themselves in a massive cube, filled with rooms adjacent, above, and below that they must work together to make their way through. All while encountering hazard upon hazard on their way to freedom. Alliances are tested, pasts are revealed, and these five strangers are put to the test in one big math problem for survival. 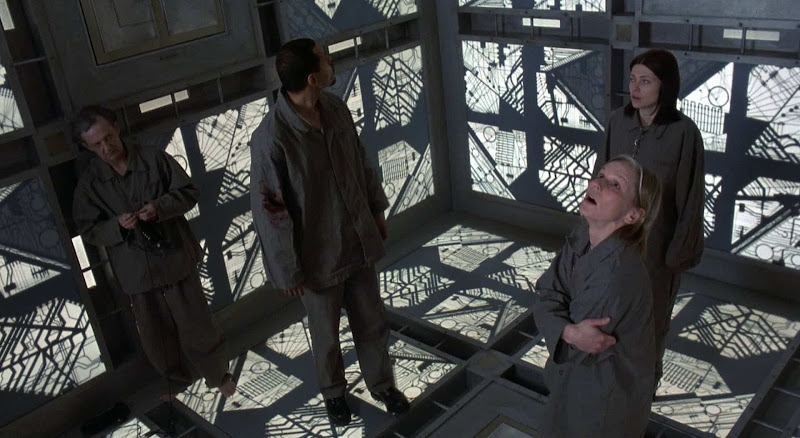 If you're familiar with escape rooms then the plot of Escape Room should be pretty straightforward. Another group of strangers are sent puzzle boxes to solve, they're all successful, and thus are given the opportunity to solve a series of escape rooms for the grand prize total of $10,000. Pretty sweet deal compared to what the cast of Cube were shafted with, right? Well like with Cube, Escape Room also tests the alliances of these strangers, with arguably better results by the time the credits roll.

Personally, I preferred Cube over Escape Room. Cube has a darker overall tone (especially during its final moments), and doesn't resort to revealing too many details about the people responsible for all the gory good stuff. I love a good sense of ambiguity. Escape Room plays it pretty safe, likely due to its PG-13 rating over Cube's R rating, and while it doesn't spare too much on the kills, the level of gore gives me the impression that it would fit in with such films as Goosebumps or Scary Stories to Tell in the Dark (both great films, mind you). Now, where Escape Room does have the advantage though is the puzzles. Cube has a couple tricks up its sleeve, but Escape Room is filled to the brim with scenarios that get the minds (and hearts) racing for it characters. But its the execution that was most important here, and Cube excelled in what it was trying to accomplish better for me. Or, maybe it was just Escape Room's painfully long ending that really bummed me out? 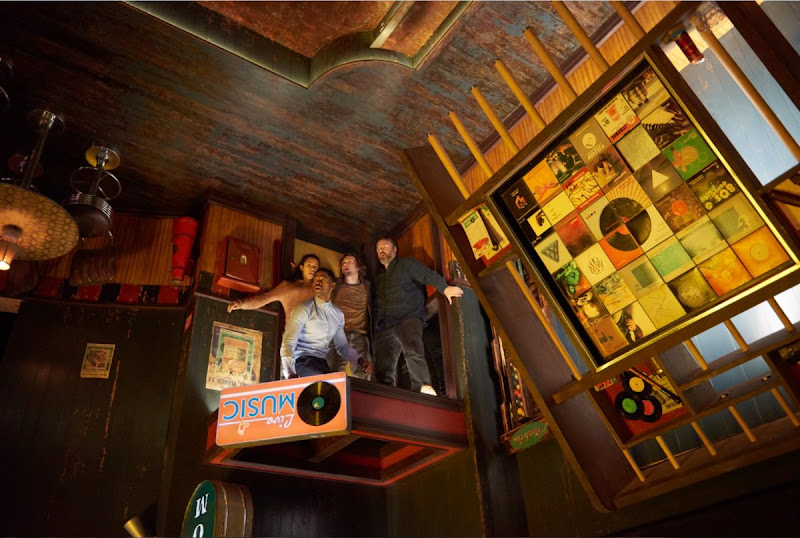 Sara: Cube piqued my interest because it was a 90's horror flick that I had never heard of, and a few years ago it was available on Netflix. Sadly, on my first attempt at watching Cube, I fell asleep (can't hang), and completely forgot about it until recently when a friend loaned us her copy. Albeit some cheesy dialog, Cube completely delivered. I think what I liked most about Cube, is the twists in the characters themselves. The Cube looks really cool, very sci-fi/space-ish. The Cube itself is HUGE, and the rooms are different colors. As Jeremy mentioned, some of the rooms are rigged with deadly traps, while others are safe. There are a couple of sequences of the trapped characters climbing through each room, taking what seems like hours to travel through never ending square rooms. Anxiety inducing, much?

Escape Room in short, I would argue is more fun. The kills are better (IMO), the backstories for each character are kept short and sweet, but there's just enough to hit you in the feels for each death. The comic-relief is pretty decent, but I have to agree with Jeremy on the ending. It sort of feels more like the ending of an episode for a TV series instead of a film, but it's not enough to keep me from re-watching this movie. I think overall Cube is a better horror movie, but Escape Room is a great movie to watch in a group/if you're looking for a more action/fun horror flick.

We don't have much on our calendar for the rest of this month, so we are planning on catching up on some more horror movies that we haven't gotten around to, and hopefully checking out Spirit Halloween for some spooky good stuff. Thoughts on Cube and Escape Room? Leave us a comment here, or hit us up on any of our social media platforms @FoxyCatCoven. You can also join our Facebook group: Coven Creeps, located right on our Facebook page. Until next time, keep it creepy, kids!