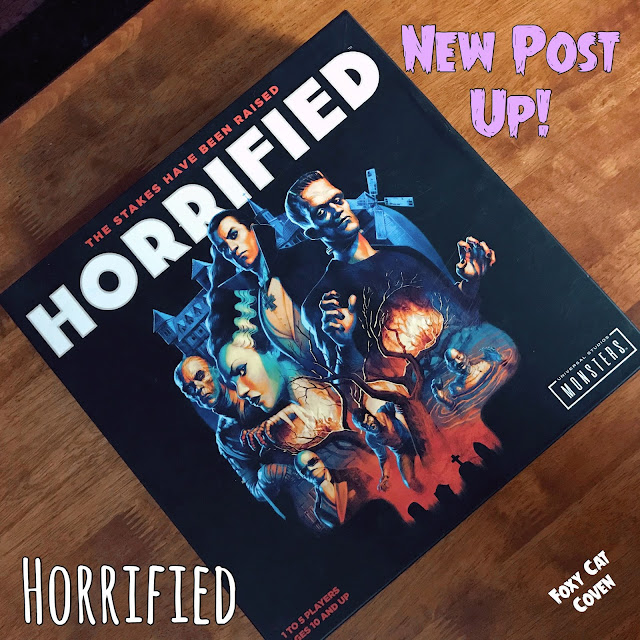 Sara: Hiya, Creeps! We are so stoked to share another Ghoulish Game Review with you kids; Horrified! I actually got this game for Jeremy last X-Mas, but we haven't had time to play it at all. Luckily, we had a friend stay with us a couple of weekends back, and we finally busted this sucker out. Since then, we have played it with a larger group, as well as just the two of us, and have had a chance to battle each of the monsters, so a review was finally in order! Don't have anyone to play with? You can play this spooky-table-top adventure solo as well, which is awesome! You can even choose the difficulty level by Monster, or, how many monsters you choose to battle. Did I pique your interest yet? Cool beans, lets get ready to battle the classic Universal Monsters, bitches!

Meet the Monsters: You get to choose to battle Creature From the Black Lagoon (favorite), Dracula, Frankenstein & The Bride, The Invisible Man, The Mummy, and Wolfman. Each Monster has a complexity level (low, medium, high). Not sure who to battle first? The recommendation for the first game is Creature and Dracula.  Novice game: any two monsters, Standard game: any three monsters, and Challenge game: any four monsters. If you really want to get spooky, you can try to beat them all-if you dare. Each Monster has different challenges for the players (in this game, Heroes) to advance, so no two monsters are alike. Because of this, you get to team up with the other Heroes to battle the monsters together, and each Hero has a special ability = more incentive to work together. Random villagers are introduced throughout the game, and it is up to the Heroes to get them to safety for a bonus action card to help battle the Monsters. However, if a Monster succeeds in attacking a Hero or Villager, the Terror Level increases! 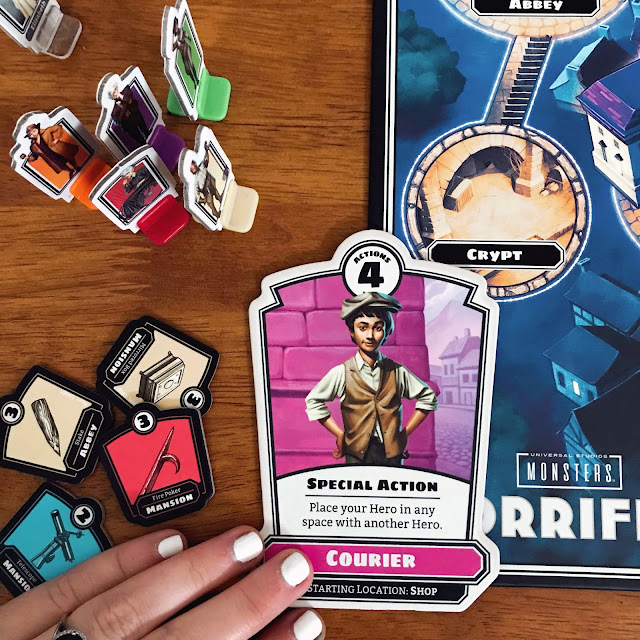 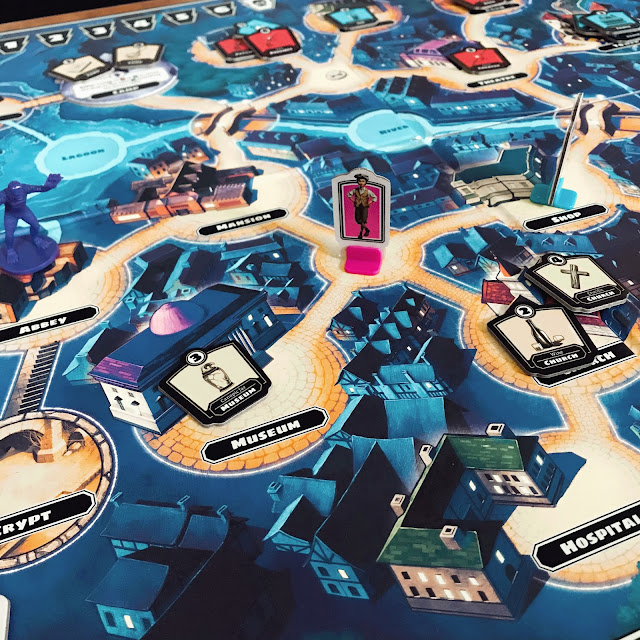 Jeremy: Much like many of the horror board games we've encountered thus far, this one seems far more complicated than it actually is. And that's something I was immediately thankful for. Perhaps my favorite thing about Horrified, after giving it four runs thus far, has been the variety that goes into not only each monsters challenge, but what each hero can do. While we don't want to give away too much of what goes on in your typical game of Horrified, what I can say is that the heroes are given more than enough tools to keep the monsters sweating. Which is why i'd recommend Horrified for players both young and old, due to the difficulty never reaching a level that isn't manageable by even a casual player of board games. While some tasks involve doing a bit of puzzle solving, the core tenants of this game are teamwork, and getting things and people from one point to another, save for the aforementioned, occasional puzzle to solve.

Fans of the Universal Monsters are going to absolutely love this one. While the lore is kept to a minimum, drawing off what even those who haven't seen the movies should know, there's still a rampant sense of nostalgia, and even a bit of world building going on here. While my favorite Universal Monster often flips between the Wolfman and The Invisible Man, with this game I recommend you give the combination of The Mummy and Creature a try. I personally loved the challenge they presented, and felt The Mummy especially had the most unique puzzle to solve of the bunch. There's not a whole lot I would change about Horrified, but what would elevate it to near perfection for me would be if we could get an expansion pack. Get some scenarios going, add even more challenges required to take out each monster, basically make this the ultimate way to bring these monsters to the world of table top games. That being said, I encourage you to check your local game shop, or Target (I saw it there for the excellent price of $34.99), for Horrified and send these bastards back to where they came from. 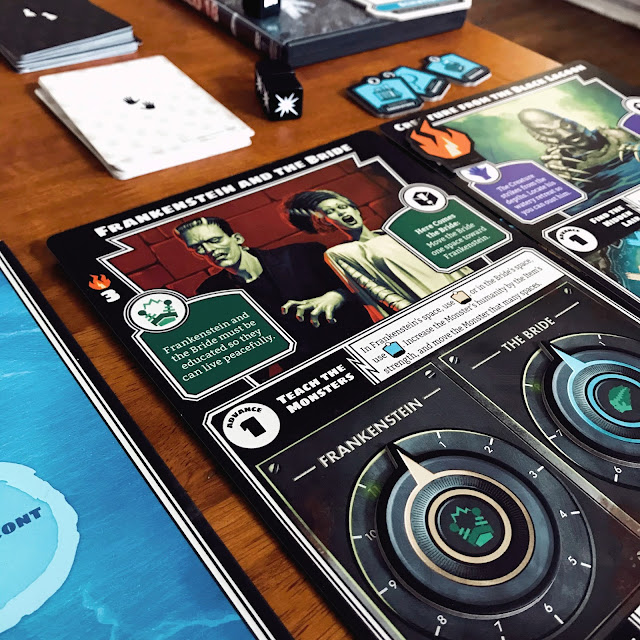 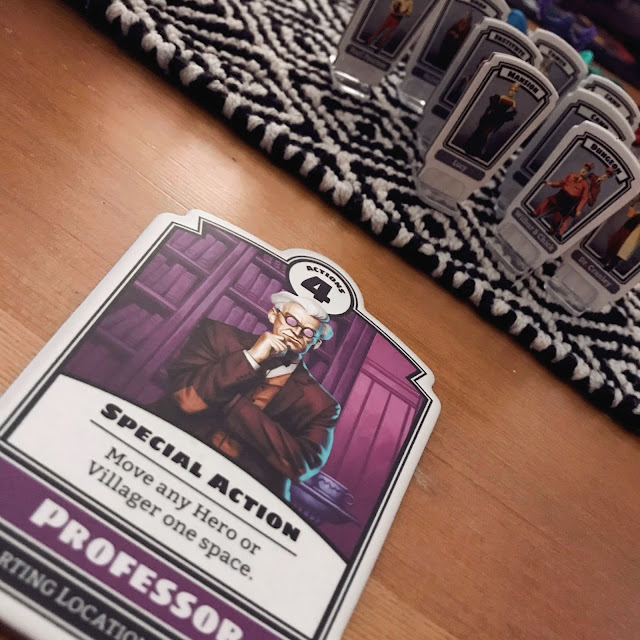 Sara: Fan of Horrified? Know another spooky game we should check out? Hit us up here in the comments, or on any of our social media platforms @FoxyCatCoven. Or you can join our Facebook Group: Coven Creeps, located right on our Facebook page. Don't forget, this Thursday, August 13th is our next Netflix Party! We will throw two films up for voting on Instagram this week, so you creeps get a say in what we watch! Tune in at 9pm, EST for the party. DM us anytime Thursday letting us know you'd like to join and we will send out the link 30 minutes before the party starts. Just make sure you have Netflix Party installed on your laptop, and we will see you then! Until next time, keep it creepy, kids!