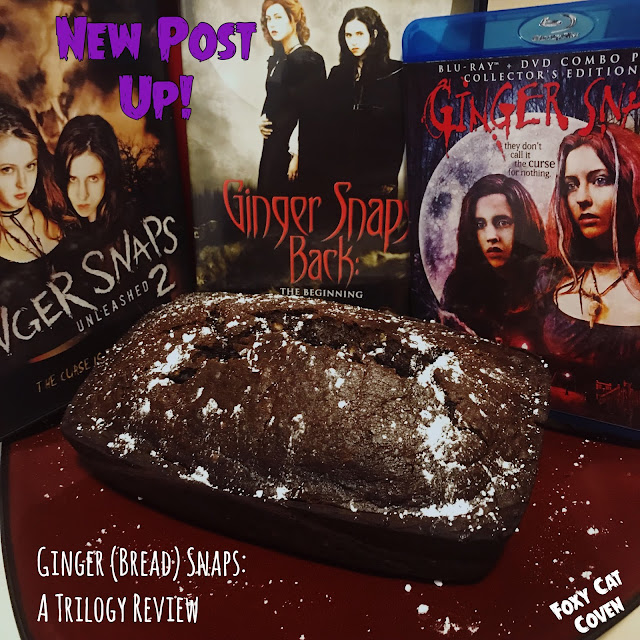 Sara: Happy Humpday, Creeps! Today we have a cozy-little-horror post for you, our thoughts on the Ginger Snaps trilogy, and a recipe for gingerbread! What goes better with werewolf movies set in colder months, than some fresh-baked gingerbread to go with it, amiright? Horror-Hygge, I am making it happen.

Anyways, let me start off by saying that Jeremy introduced me to Ginger Snaps (2000) a couple of years ago, and I immediately loved it. I have such a soft spot for anything 90's-early 00's when it comes to horror, but top it off by making a coming-of-age film werewolf themed?! Talk about going through changes. I wish that I had seen this when it first came out, I remember seeing the cassette tape on the shelf at our local Blockbuster, but I sadly never picked it up. Fast-forward to 2016, and this flick not only became one of my favorite horror movies (Mandy 2018) beat it out, but it is my go-to movie. Can't pick a movie to watch? Ginger Snaps. Come home after a night out, and not ready for bed yet? Ginger Snaps! Want to drive your fiance crazy by forcing him to watch the same movie over and over? GINGER SNAPS. 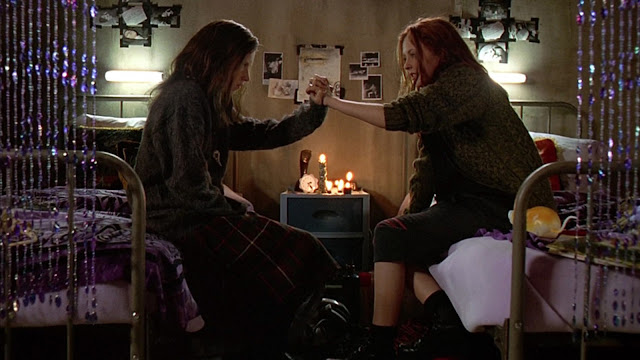 1. Ginger Snaps (2000): Two death-obsessed sisters, outcasts in their suburban neighborhood, must deal with the tragic consequences when one of them is bitten by a deadly werewolf.

Sara: At first Ginger and Bridgette Fitzgerald come off as your typical, mopey teenagers dealing with normal teenager things: annoying parents, shitty peers, and puberty. They dressed like little grunge-goths, the BEST aesthetic, TBH, and like they could be the girl's from The Craft's little sisters. Although the werewolf in its final form isn't my favorite, I love the slow transformation it takes. Some pointed ears appear, scraggly nails, and even a wee little tail, not to mention the hormones-woof. This movie also has something I really liked: the ending wasn't completely predictable.

Jeremy: I've only seen this movie about 239,434,009 times, thanks to Sara, but even after all this time, I can't complain about one of my favorite werewolf movies of all time. Taking on the genre in a unique way, somewhat similar to Teen Wolf but from a teenage girl perspective, Ginger Snaps has always felt like a breath of fresh air among other werewolf films. With some great gore effects, edgy vibes throughout, and spot on performances by leads Katherine Isabelle and Emily Perkins, I can't recommend this one any higher. 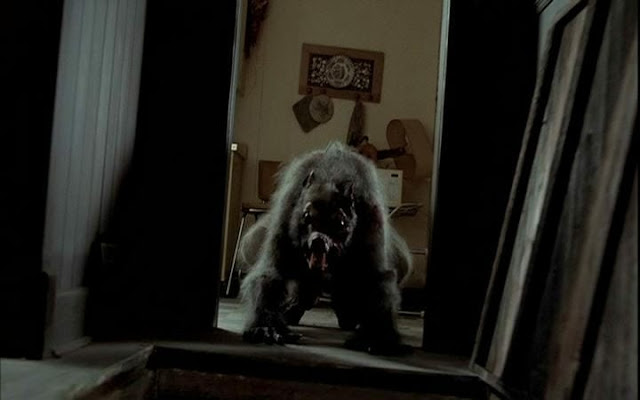 2. Ginger Snaps 2: Unleashed (2004): Ginger's sister Brigitte, now a werewolf herself, must try to find a cure for her blood lust before the next full moon while hiding out in a rehab clinic from a relentless werewolf.

Sara: As much as I am still obsessed with the first film, it took us quite awhile to get to the other two. Jeremy got them for me for Christmas last year, and we only just watched them the other week. My expectations were not high, as I knew that sequels can be huge let downs, but by setting the bar low, I ended up pleasantly surprised. Ginger Snaps 2: Unleashed takes place in the dead of winter, and we don't know how long it has been since the first film. Brigitte is the focal point in this film, and I did like the shift,  however, this film didn't have that chemistry that the first one had. Most of the other characters in the movie were very annoying, so it could have had a couple more kill scenes, tbh. Still, I did enjoy it and plan on watching it again.

Jeremy: A big shift in quality for me, I think I enjoyed this one a little bit less than Sara did, despite thinking the mental hospital angle was a good direction to go for the sequel. In fact, it feels like a lot of good ideas were attempting to be incorporated into the plot of Ginger Snaps 2, I even found the directors style to match some of the look of the first film. But with a truly awful addition in the form of Bridgette's eventual sidekick, Ghost, I found quite a bit of this film to be grating. Toned down effects, TV movie performances, and a disappointing ending marred this one for me. Ginger Snaps 2 is also a massive downer, which I personally enjoyed for some of its darker moments, but I felt there's too much wrong here to recommend it outside of serious fans of the original who are curious. 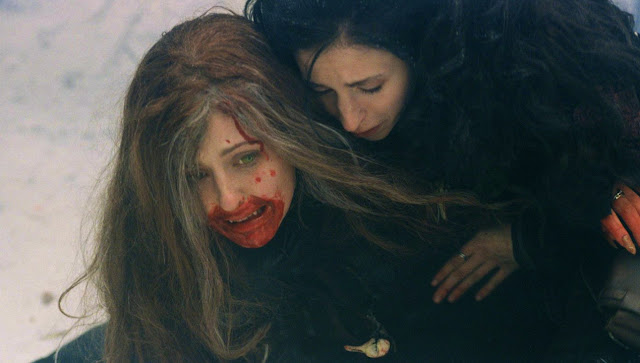 3. Ginger Snaps Back: The Beginning (2004): Set in 19th Century Canada, Brigette and her sister Ginger take refuge in a Traders' Fort which later becomes under siege by some savage werewolves.

Sara: This one, I really loved. Its kind of ridiculous because it takes place in the 19th century, but the sisters completely use early 2000's slang. They are just as feisty, and completely devoted to each other as much as they are in the first movie, so that chemistry is back. However, this one is a bit more predictable than the previous two. Costumes are pretty wicked, though. Definitely will be watching this one again before winter is over.

Jeremy: This was a pretty decent one, a good improvement over its predecessor in a lot of ways. First off, I loved the 19th century setting, and even if many of the accents were clearly not of their time, it didn't completely take me out of the time period. The graphic violence in Ginger Snaps Back is definitely upped from the sequel, with a couple pretty harrowing moments, and some great deformed werewolf make-up on the leader of the town Wallace's son. While this is a prequel to the original film, setting the idea of a unbreakable sisterly bond between the two leads, nothing that happens here has any consequence to the events of the two films that follow. In this way, this film is entirely unnecessary to the series overall. But, if you can look past that like I did, I thought this was a fun, old-timey, werewolf tale that runs at a brisk pace and never lets up on the tension and mayhem. Check it out. 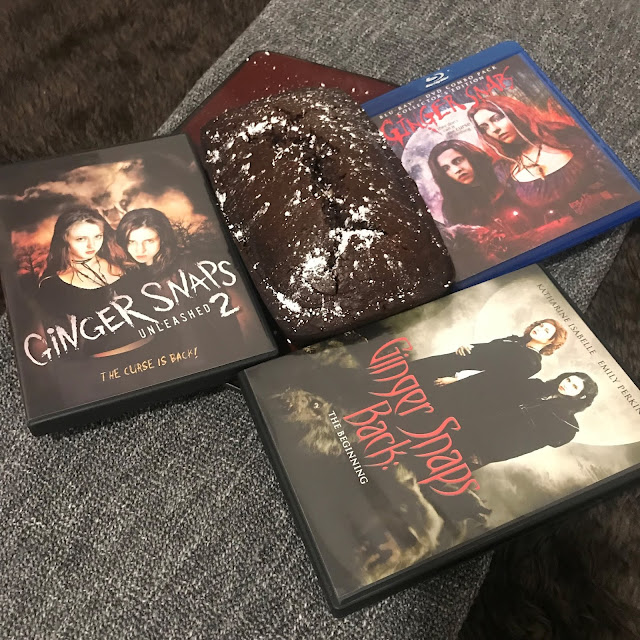 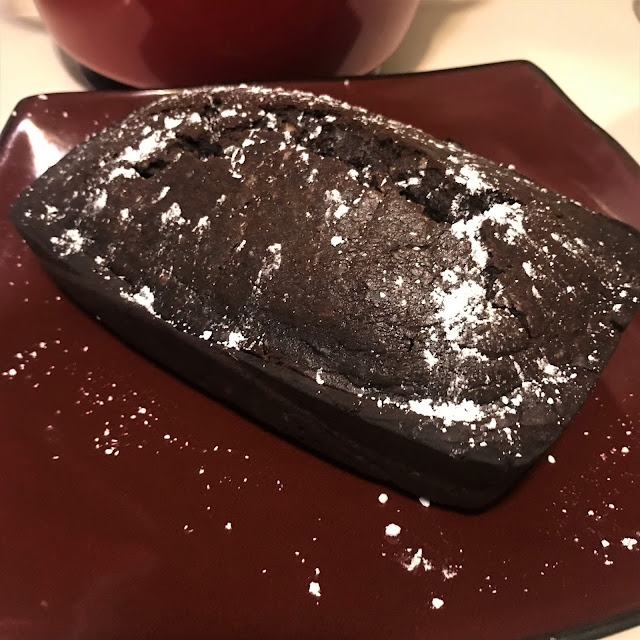 I was originally going to make gingersnap cookies, but I felt a bit cookied out after the holidays, so I decided to try a quick bread, since they are usually pretty easy to make. I tried my hand at this one via Tastes of Lizzy T, and it came out great! I did make this one vegan though, as I was bringing it to a friend's house who is, so all I did was sub the butter for vegan butter, the milk for coconut milk, and sub the eggs with flax-seed (1 tablespoon flax-seed + 3 tablespoons water = 1 egg).

Preheat the oven to 350 degrees.

In a mixing bowl, thoroughly stir together the flour, baking soda, ginger, nutmeg and salt. Set aside.
In a large mixing bowl, cream together the sugar and butter until well combined. Add the molasses and vanilla. Mix well. Add the eggs, one at a time, until well mixed.
Add the flour mixture to the sugar mixture alternately with the buttermilk, stirring just until blended after each addition.
Spoon the batter into a greased 9x5 inch loaf pan and bake at 350 degrees for 45-50 minutes.
Cool in the pan for 10 minutes.
Remove from the pan and cool.

I think I would personally up the spices on this, as it tasted good, but a bit more flavor wouldn't have hurt. I think it would be great toasted with some cranberry jelly as well.

Jeremy: And that's all we have time for! While i'm sure it will happen someday that this film gets remade, for now we have this classic trilogy to enjoy, with all its ups and downs. Personally i'd love to still see a continuation of these films, but for now, what do you think about the Ginger Snaps films? Somehow think the second or third film is better than the first? Let us know! We're DYING to hear from you. But until next time, keep it creepy!