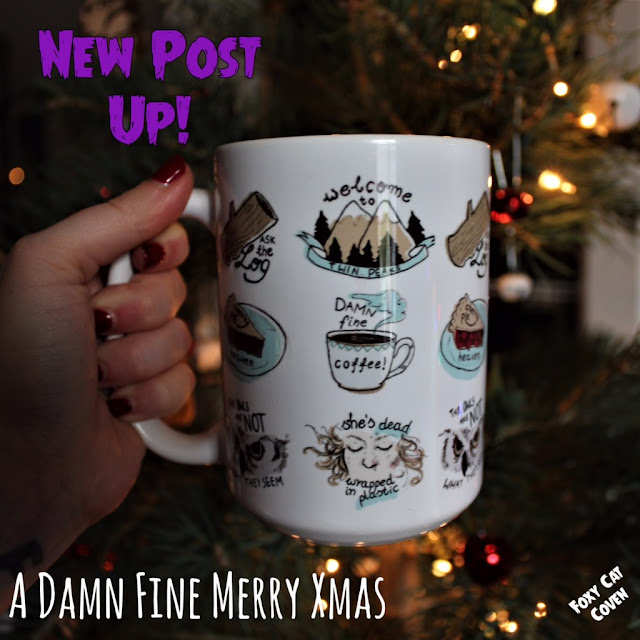 Sara: We are super festive this Holiday season here at The Coven, and I am pretty sure its because we have our own place for the first time during the holidays. As I mentioned in our Up and Coven Happenings post at the beginning of the month, we decided to do something spooky for our Christmas theme: Twin Peaks! Jeremy first got the idea last year when one of my coworker's gifted us an Xmas tree, and we decorated it with pie and coffee ornaments. This year we had more than just a small fake tree to decorate, in fact, we had a large real tree to decorate, and then some. We figured a Twin Peaks theme should be red, white, and black, with lots of northern elements, and all the chevron, and owls we could find.

We added a couple of standard xmas items (what can I say, Jeremy likes nutcrackers and snow globes), and obviously we left a lot of spooky memorabilia up so we just added some twinkle lights and made the place festive as possible. Sadly one of my ornaments hasn't arrived yet-it was a fish in a peculator-don't worry, when it shows up, I will post it on Foxy Cat Coven's IG story. I also wanted some chevron bulbs for the tree, but had to settle for what I could find, luckily Micheal's had some black ones. Next year, there might be some custom bois on that tree! I think what really brings it together, is the coziness. Twin Peaks, for being a very weird, trippy, sometimes scary show, it has a lot of cozy elements! The Double R Diner is choc-full of coffee and pies, and the Great Northern Hotel is welcoming with its fireplaces and wood paneling. It's never mentioned what time of year the series takes place in, but since all of the kids are in school we can assume fall/winter, and everyone is layered in their finest 90's big sweaters and coats.

Maybe next year we can spring for some red curtains, and leave all of the gifts wrapped in plastic. 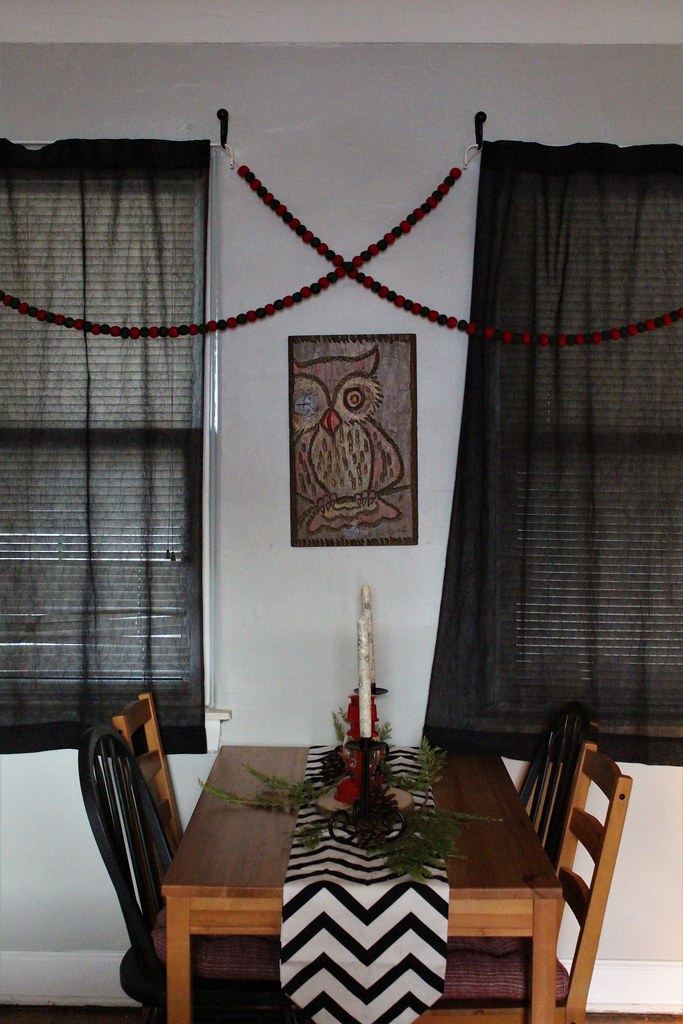 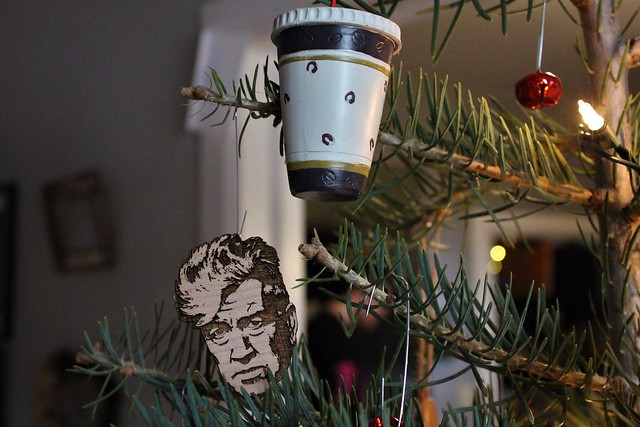 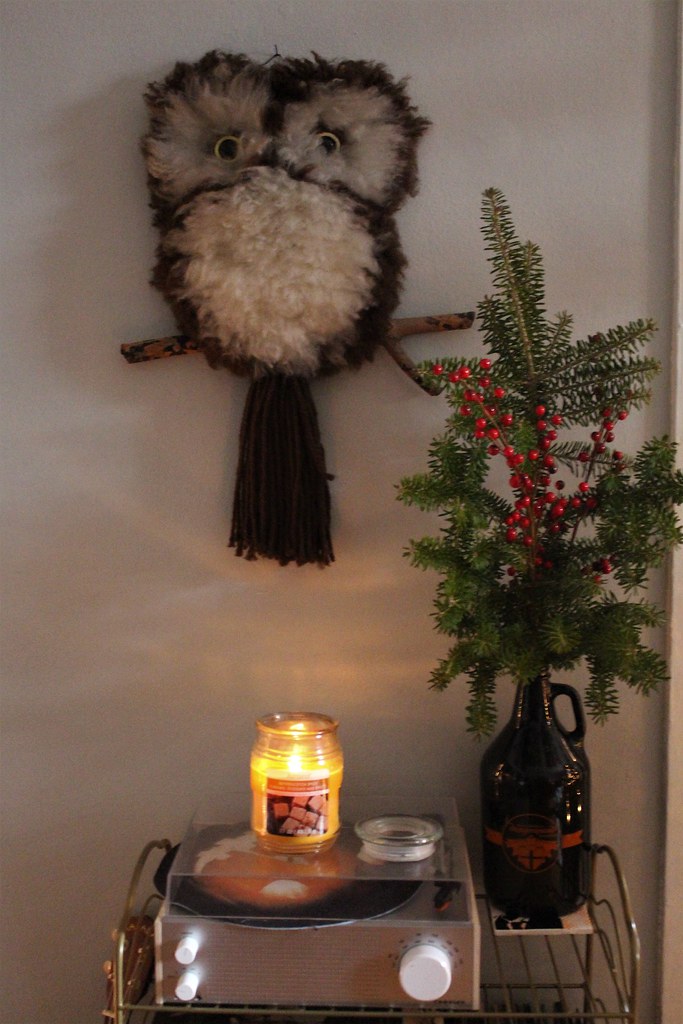 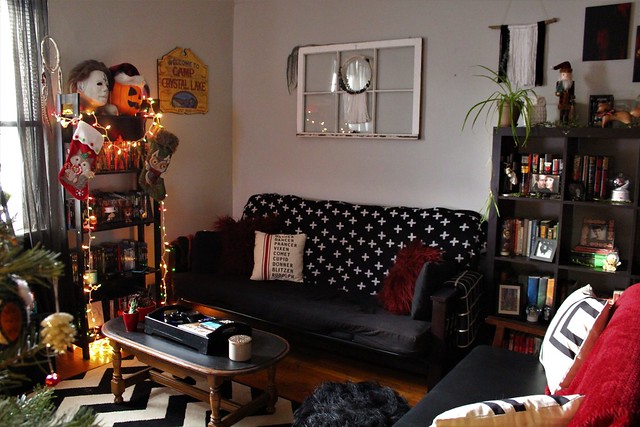 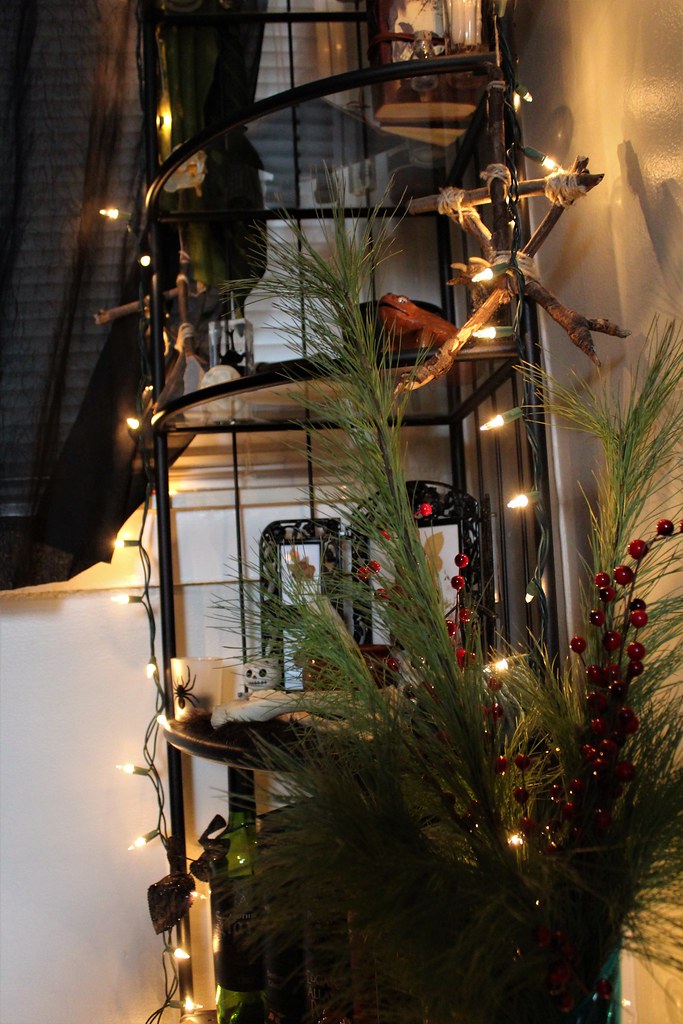 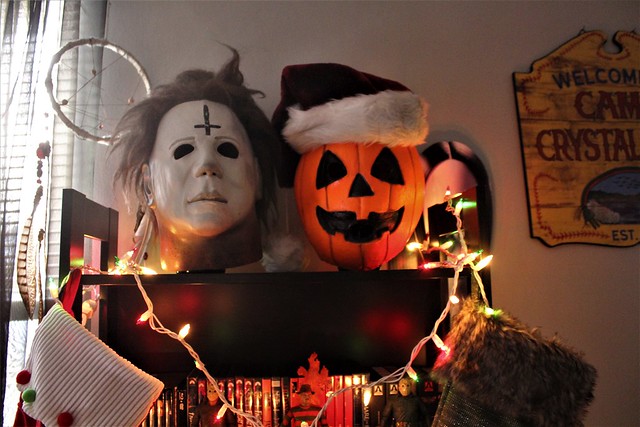 Jeremy: While we've alluded to Twin Peaks plenty of time over the past couple of years here on the blog, I don't recall a time where we really went into what it actually is! For those who are unaware, Twin Peaks started off life as an early 90's mystery/horror TV show, created by David Lynch and writer Mark Frost, and ran for only two seasons before its abrupt cancellation. The primary focus of the show was the mysterious circumstances surrounding the death of high school student Laura Palmer, and the many people that factored into her life, where we followed the exploits of Special Agent Dale Cooper and local law enforcement trying to crack the code. Oh, and there's a whole lot of weird supernatural shit. While the show's second season eventually veered off into other, sometimes very silly, plot-lines once the mystery was solved, I still found plenty to enjoy right up until the end, despite the rapidly declining ratings of the show.

Fast forward to a year later and we were graced with the excellent prequel film "Fire Walk With Me". Another Twin Peaks property that got way more hate than it deserves, this feature film primarily showed up the events leading up to the death of Laura Palmer, while both answering questions we were left with after the shows cancellation, but also creating even more questions in true David Lynch fashion. It would not be for nearly 25 years later that any kind of Twin Peaks media was released, but lucky for us fans, in 2017 a third season came to light, and we were taken right back to Twin Peaks and the lives of its residents (along with tons of new locations and characters). Going even further in the bat-shit insane territory, season 3 once again left us with even more questions, ending on a cliffhanger just as the second season before it.

Will there be a fourth season? Who knows at this point, I personally find that if you give this show a chance you might be a little more okay with the show ending the way it seemingly has. I feel there's a little more finality this time around, but that's just me. Anyway, if it's not apparent enough, i'd recommend this show to damn near anyone who hasn't seen it. People might be surprised to find out that I didn't even come across the show until 2016, meaning I was lucky enough to not have been a fan who had to wait 25 years on a cliffhanger. Lucky me. 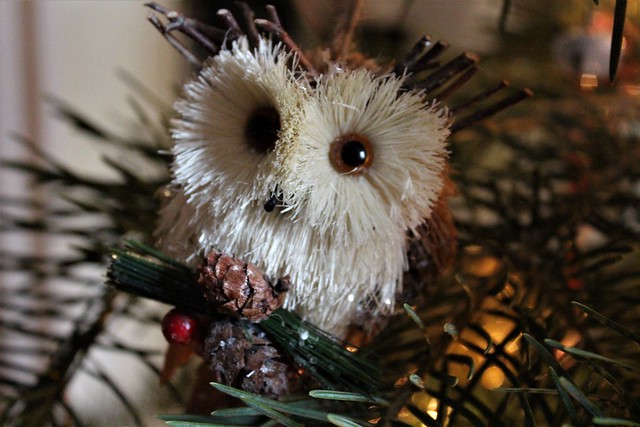 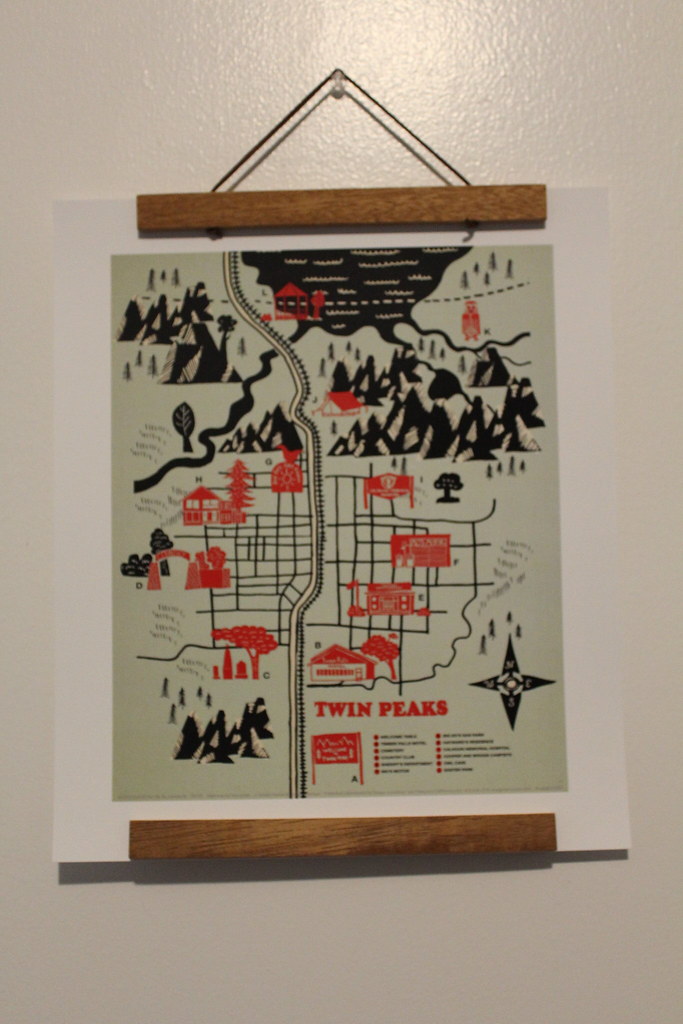 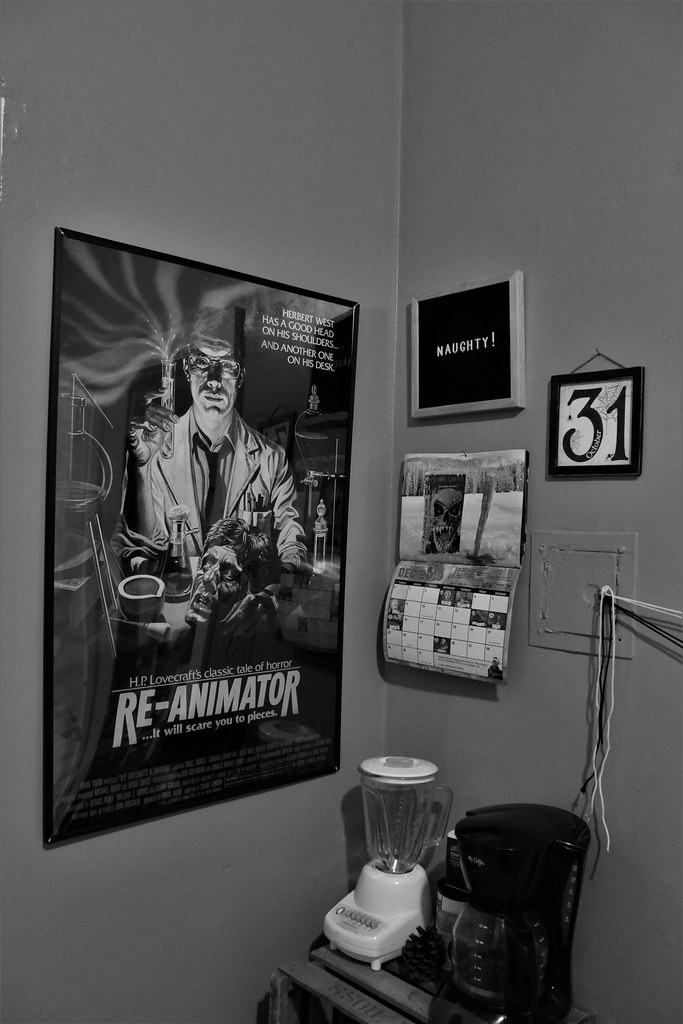 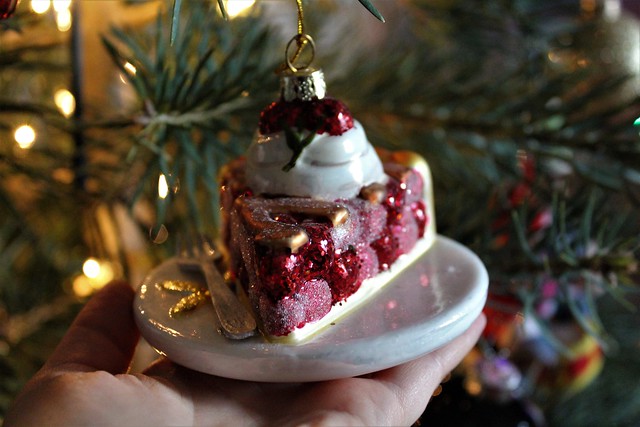 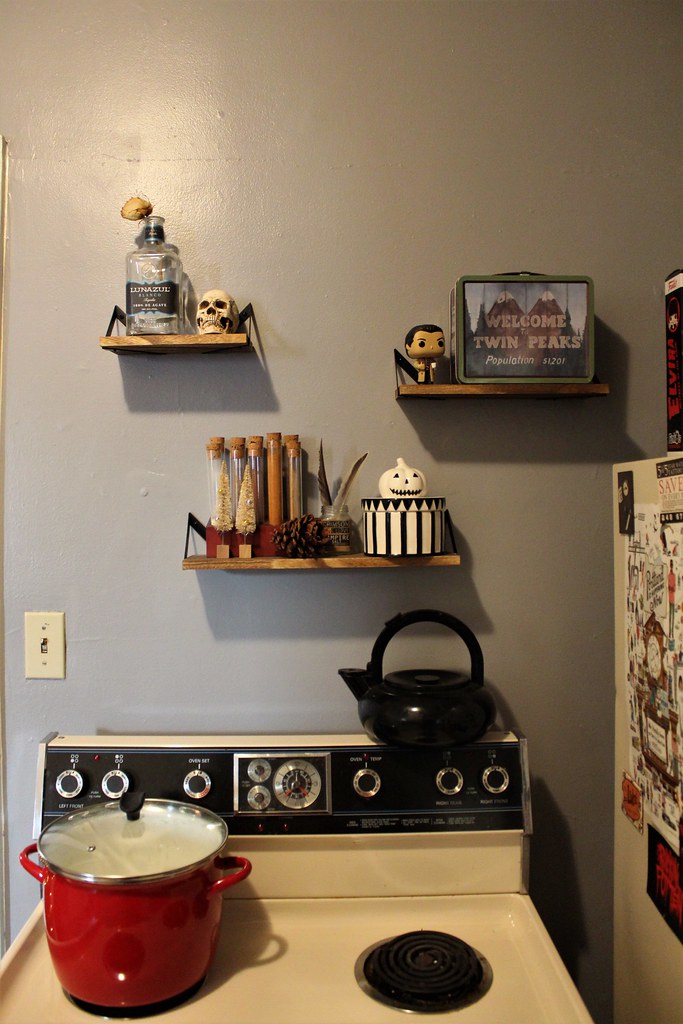 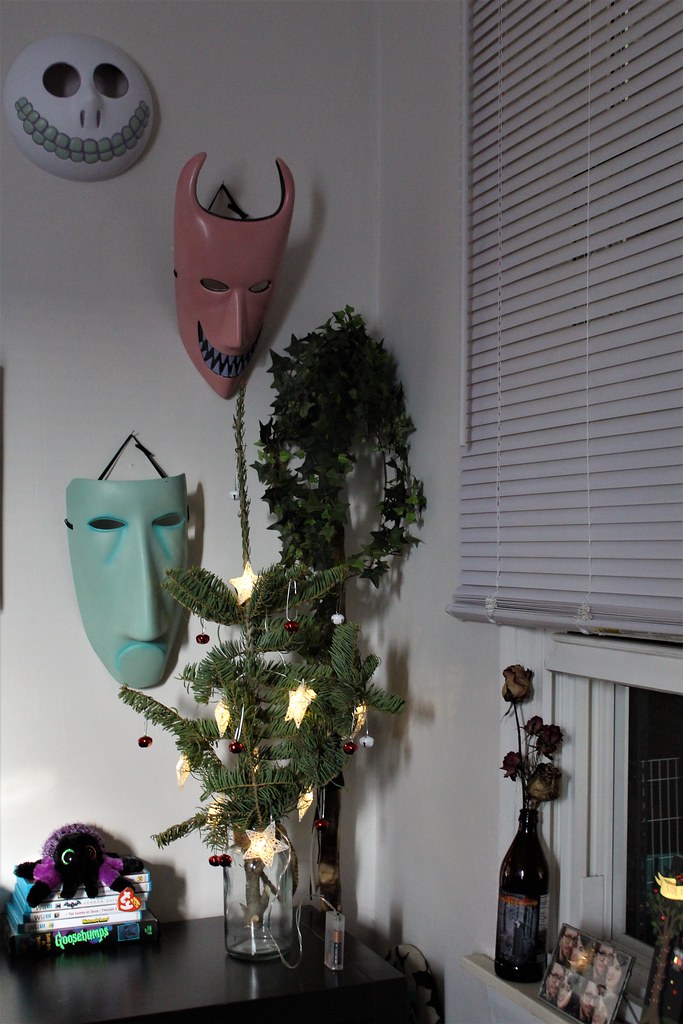 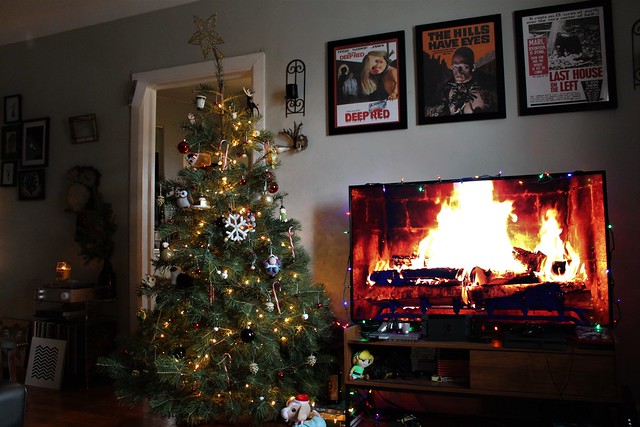 Jeremy: I think the woodsy aesthetic was the perfect match for what we wanted to do for Christmas this year, and one I imagine we will do for many years to come. While this is mostly a start for us, as Sara mentioned this is our first full on place together, i'm stoked to see what we can come up with over time. If my rambling above did even a little justice towards getting you to check out the show, it's widely available online or in stores these days, with some very killer box-sets out there. Let us know though if you give it a watch, or are a fan already! Oh hey, even if you hate the show, let us know too! We always love to hear from you. But that's all for now, so we'll be back at you again this weekend for another post, but until that time, keep it creepy!
Coven Happenings