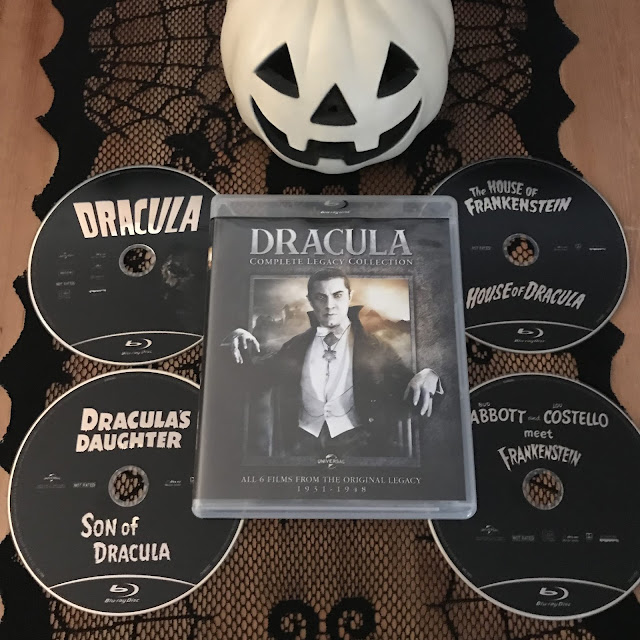 Jeremy: For many horror fans, myself included, our education into the genre through the medium of film began with the classic Universal monster movies. From The Invisible Man, to Frankenstein, to The Wolf Man, these iconic figures have endured through time even today as the reigning faces of the Halloween season. Every one knows at least one, if not all, of these guys. That being said, my family never owned any of these older films, VHS or otherwise, instead often waiting till the Halloween season to introduce me to whichever of the thirty (!) Universal monsters movies that happened to be on television. And while Frankenstein was the first ever Universal monster I was introduced to through television, Dracula was the first film I ever owned from this era. This occurred during the early 2000's, when Universal released a majority of these classic films on DVD in the form of collections based off each monsters franchise.

While I did end up picking up the Dracula and The Wolf Man collections, my interests ending up taking me elsewhere and I abandoned taking on the task of collecting them all. All that would change last year when, for the first time ever, every single film was collected in one box set (and on Blu-Ray!) known simply as "Universal Classic Monsters". With a heavy blow to my wallet I sought this beast out and, with some months behind me since, have finally decided to give each franchise a proper look at. And so, I binged through all six Dracula films over the course of two days, and I have words. Pull out your capes, sharpen those teeth, and let's sink in to my ranking of the Universal Dracula films: 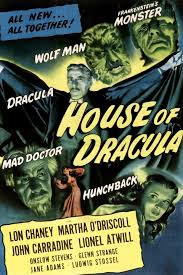 First up, I wanted to talk about a few things I liked, because I don't believe any of these films are necessarily awful. Onslow Stevens, who plays the scientist eventually gone mad Dr. Franz Edelman, provided a great turn from the resourceful hero of the film, to an infected "vampire" through a botched blood transfusion. This saved what I thought was a big let down of a performance by John Carradine as a Dracula looking for a cure to his vampirism, only to randomly fall prey again to his devilish ways, before being killed off relatively early in the film to make way for Edelman's villainous turn.

I found the lady hunchback assistant of the film to be pretty progressive, giving a grounded performance to Edelman and Dracula, while Lon Chaney Jr.'s gave a solid Wolf Man performance, fitting well into a film concerned with the cure for these monsters ailments. Now for the bad: First up, Frankenstein might as well have not been in this film, posing no threat outside of a short dream sequence. I know it's an ensemble film but i'd be fine with cutting out The Wolf Man stuff if it meant nixing the Frankenstein bit. As I alluded to before, i'm not a fan of Carradine's Dracula, guy has no menace in this film whatsoever, and of his two outings as the Count , this is easily the worst. But perhaps the films biggest misstep comes from the fact that it doesn't have any fun with its concept of an ensemble film, one that seemed to be saying it could be the last of its kind for these three villains. Something that was better handled in the other Carradine Dracula film found later on in this list. 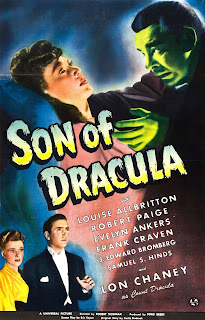 I actually debated for awhile on whether or not to place this one last or not. For the complaints I had with John Carradine's Dracula performance in House of Dracula, he's no where near as bad Lon Chaney Jr. giving the old Count a try. I'm happy that at least Chaney only gave this role a shot once, as he was always perfectly suited to play The Wolf Man instead (and he would in fact, four separate times). That being said, for the moments that Chaney does emote in a way that's believable as a menacing, hundreds upon hundreds year old vampire, he mostly nails it. The scene of bullets passing through him only to strike a woman hiding behind him, the scene of him shoving his assailant through a set of double doors via hand to the throat, and his final scene before dying, where he shoves the deranged hero of the films head into the flames of his burning coffin, yelling for him to put out the flames. These scenes are what elevate this film above House of Dracula.

This was the first in the series to be set outside of Europe, the action taking place in New Orleans this time. This meant for an abandonment of much of the Gothic tones of the first two films, instead replaced by a focus on voodoo and the climax of the movie being set in swampland. Not a bad thing, but something that was often executed poorly, especially in day time scenes that feel taken from a completely different film. But forget all that for a moment, and know that the main reason Son of Dracula is placed here is because Chaney's depressed Dracula doesn't fit well in a film that he neither seems all that into sucking some blood, or being cured of his condition. The lost puppy of the Dracula's. 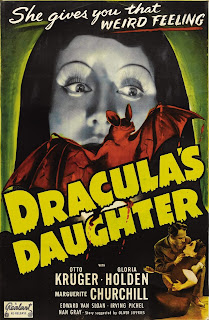 There's no other way I can put this when I say that: This film is pretty boring. And that's nothing on this early release in the Dracula series, as you'll see higher up on this list. And so, if boring is one of the worst sins a film can commit, why place it higher up on this list? The atmosphere, the setting, the performance of Dracula's Daughter, the return of Van Helsing, and some key scenes elevate many of the minutes you may spend nodding off. Maybe that's a little harsher than I intend, set in foggy England, Dracula Daughter finds Gloria Holden, playing as Countess Marya Zaleska attempting to break the curse that the original Dracula put on her by stealing and burning his corpse, left behind from the previous film. When this proves to be futile, she again resumes her nefarious ways, eventually looking to create a companion for herself once realizing a cure for her vampire ways is impossible.

While there are some great scenes here, including the seduction of and attack on a runaway girl, it felt that the in between time between the great, iconic moments was so tiresome. I was happy to see the return of Van Helsing (called Von Helsing here for whatever reason), he does next to nothing here and exists in every scene that seems to drag on and on. When Dracula's Daughter is at its best its focused on the titular Countess, and her just as evil minion Sander. When it's at its worst, it's following the story of any other character. And it tends to like to do that sometimes. 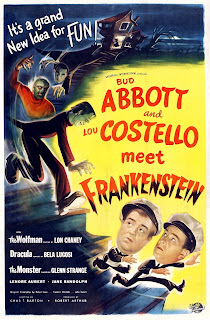 You read that right, despite not mentioning the name Dracula in the title this is, in fact, part of the franchise. In fact, this is one of two Frankenstein films that is. Anyway, I knew of Abbott and Costello but this is far past my time or interests that i've never seen a single thing they've been in before this. Biggest props I can give to this film though is the return of Bela Legosi as Dracula, giving a performance that's seventeen years after the original, and better than any other since. When he rises from his coffin for a gag involving Costello, that was easily the most hyped i've been for a returning character watching these films. And while I might not get as much of the comedy here, this is easily the most fun film in the series, clearly not trying to take itself too seriously, but still presenting these monsters as a threat. I'd say too that despite Frankenstein being in the title, Dracula is still the main antagonist of this feature, pulling all kinds of strings to manipulate those around him, including Frankenstein's monster.

It was also a pleasure to see both Legosi and the returning Chaney as The Wolf Man face off against each other amidst a Scooby Doo-like chase scene. But treating this as apart of a collection of horror films, while there's a good amount of thrills to be had, the scenery and scares are pretty absent here. So. it ultimately comes down to what you're in the mood for, but I personally appreciate the horror and atmosphere of these next two films more than the slapstick approach taken here. 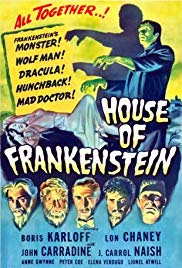 A traveling slideshow of horrors. Driven by Boris Karloff as a convicted mad scientist for attempting to put a human brain into a dogs body. And a love triangle between The Wolf Man, a hunchback, and a gypsy woman. All while retaining the classic horror of the first few films, mixed with a shot of insanity, this was easily one of my favorite times with a Dracula film from any era. The best part about that? Dracula is hardly in this film. What little screen time Carradine has here is spent killing off a police inspector as a bat and seducing a woman with the power of his ring. But just as quickly as he is revived by Karloff's character, Dr. Gustav Niemann, he is killed off once he proves no longer useful.

Niemann is the star here, as he proceeds to not only manipulate The Wolf Man to his eventual death, but also revive Frankenstein's monster. With so much going on, the film moves along at a brisk pace and hardly ever holds up. Plus, this may be the film in this series with the highest body count, where pretty much every central character of the cast dies. Top notch stuff. 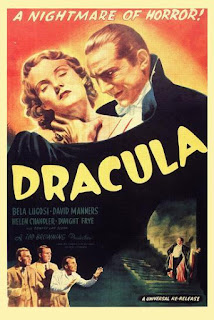 I didn't want to like everyone else but fuck it, nothing from the Universal era count beat this timeless story. The combination of Bela Lugosi as the most iconic portrayal of Dracula of all time, mixed with my personal favorite portrayal of Renfield ever, this is the prime example of gothic horror done right. How this film manages to accomplish so much atmosphere without originally having a score is unheard of. Add in the great foil of Van Helsing, played with cool confidence by Edward Van Sloan, and you have one of the greatest vampire films ever made. If by some happenstance you haven't seen this film, I encourage you to return to it this Halloween season with an open mind. It may feel a little slow, there's a great deal of talking that goes on, but this film begs to not just be watched, but to be experienced. And while the ending comes at you fast it almost feels like a reason to start the whole thing over again, and experience the world of Transylvania one more time. There's not a whole lot else I can say, the damn thing remains a masterpiece all these years later.

How would you rank the Universal Dracula films? Disagree with my list, or think i'm absolutely right? Let me know in the comments or our various social media platforms! I'm basically new to this entire franchise and would love to hear any and all opinions on these classic films. But until next time, keep it creepy!