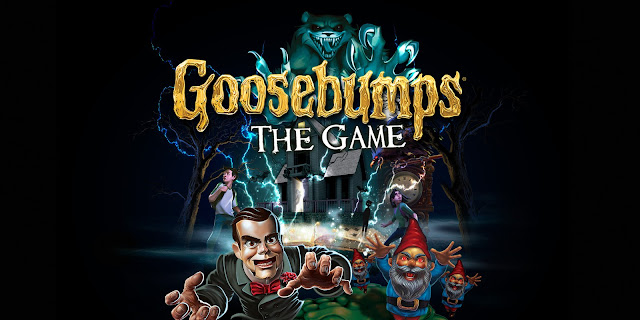 Jeremy: For many of us, Goosebumps was where our horror journey began. And while R.L. Stine's successful franchise has seen plenty of representation in the world of literature, film, TV, and even board games, its presence in the video game market has been pretty lackluster, especially as of late. But lets back up a bit to 2015, with the release of that Goosebumps film starring Jack Black. As video games are want to do, a tie-in game is often always attached to the release of a highly anticipated film. While it took us a couple years to finally check out the Goosebumps movie (right before it's sequel was about to come out, in fact), I at least knew of its existence and the hype surrounding it at the time of release in 2015. As for Goosebumps: The Game? I had no idea this thing even existed until several months ago. Sure, i'm not exactly up to date on news surrounding a children's horror series, but i'm going to go out on a limb and say that the marketing for this game must have been pretty non-existent for it to fly so completely under my radar. But we're here, it's 2019, and we picked up and finished Goosebumps: The Game, and we're here to talk about it!

The basic idea for Goosebumps is that it's a point and click adventure/mystery where you travel across three different central locations (a school, haunted house, and mall), solving many a puzzle, until an eventual confrontation with the films main baddie, Slappy, the ventriloquist doll. While non-Goosebumps fans will find there's little to relate to here, there's dozens upon dozens of Easter eggs for fans of the franchise, from the many items you'll pick up, to the dangerous situations you'll be throw into. And speaking of items, there's so many to be found that i'm certain we barely covered half of what could've been discovered. While the game has a pretty linear path once you know what you're doing, there's so many opportunities to discover new content in these seemingly simple locales. However unfortunately, that leads me to my biggest gripe with our experience: The version we owned of it.

We purchased the Nintendo Switch version of Goosebumps: The Game, and for those who are familiar with the achievement system of consoles like the PS4 and Xbox One, well, the Switch doesn't have any of that. Why this matters is that, unlike every other version of the game, you're given no reward on the Switch for anything you do. Outside of saying you beat the game, there's really no proof that you did any of the many side missions available. That didn't necessarily stop us from attempting a great many of them, but the feeling that you got nothing for your effort really started to set in fast. Another gripe for me was that I didn't understand the complete lack of voice acting here. This being the game to bear such an official name for the series, and with the film having such a positive critical and financial success, I assumed they would've put in a little more effort.

All that aside, Goosebumps: The Game was still a fun, if very short, experience playing with another person. I don't think i'd recommend it was a solo experience, especially with the lack of achievements in place. But for now, if you're a fan this is the best we've got and it isn't half bad. Oh, and watch out for that fucking cyborg mall security guard. That was easily the most tense aspect of our late night adventure to the mall portion of this game. 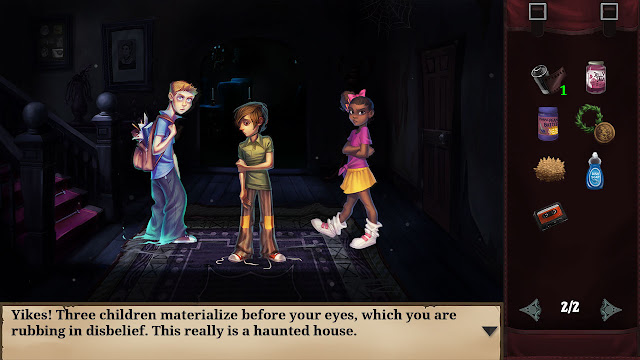 Sara: As I have mentioned before on this blog, I am one who prefers hand-held gaming systems as opposed to systems with two analog sticks. However, when Jeremy found this gem on sale I was sold! I have never played a point and click game, and although I still had a few issues clicking on the wrong items, this was a great way to get used to something with two analog sticks. Because there are SO MANY items to pick up and use, there is a lot of trial and error, therefore making a game that is relatively short as far as scenes go long in actual play.

The best part of Goosebumps: The Game? All of the references to R.L. Stine’s books in the series. As many of you readers know, we here at The Coven are pretty fond of Goosebumps and are forever hooked on nostalgia. From It Came From Beneath The Sink, to Night Of The Living Dummy, half of the fun of the game is finding out which monster/creepy thing is from which book.

Have you creeps played Goosebumps: The Game? Have a favorite point-and-click spooky/horror game to suggest? Drop us line, here or on any of our social media platforms @FoxyCatCoven, or in our all-things-spooky Facebook group; Coven Creeps, located right on our Facebook page. Until next time, keep it creepy, kids!