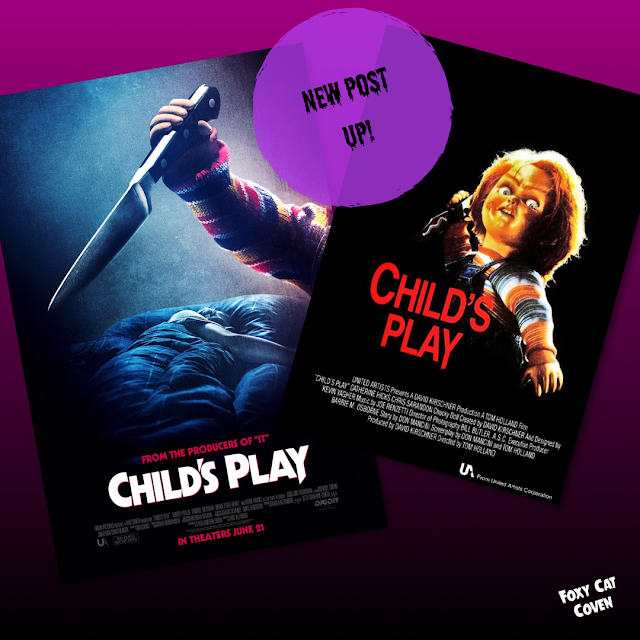 Jeremy: Welcome back, creeps! We know it's been a hot second since we last darkened your web browser, but we're back at you with something topical today: Taking a look at last month's remake/reboot/re-imagining of Child's Play, as we pit it against its original 1988 source material. Child's Play, a franchise that would eventually evolve into simply titling it's films, "...Of Chucky" as the plot shifted from the perspective of troubled hero Andy Barclay, to the killer Chucky doll, has since been reported to be continuing sometime in the future with a TV series. Despite this, we have also been given another brand new entry, one that effectively creates two separate timelines for the Child's Play universe. So, what better way to pay tribute to this potential smackdown of new vs old, Good Guy vs. Buddi, then to take a look back at the one that started it all, and where we stand thirty years later with the remake.

Both Child's Play 88' and 19' follow the same general plot: Single mother buys a popular doll for son on his birthday but, unbeknownst to either of them, that doll turns out to be far more sinister than it seems. The differences come with how and why that doll is branded evil in the first place. Child's Play 88' begins with a police chase. Our villain, serial killer Charles Lee Ray, is cornered in a department store where he is fatally shot. In order to preserve his spirit, Ray transfers his soul into the nearest object he can find, a Good Guy doll, using some unexplained voodoo magic. This being the first film in the series, the first thirty or so minutes are spent building up the  suspense and mystery with Ray, in the Good Guy doll and going by the name Chucky, pretending to be a regular doll in the possession of our leads Karen and her son, the aforementioned Andy. It's not until the body count begins to rise inexplicably to our cast that they begin to suspect something is amiss.

In the case of Child's Play 19', we have a completely different cause for the mayhem, one that I personally was far more invested in. Updated for the times, the doll featured in the remake works like a virtual assistant (think Amazon's Alexa), being able to connect to a variety of home devices, while learning from its environment to become a life-long companion to its owner. Replacing the Good Guy moniker with the title "Buddi", things begin to go wrong when we're given a look into the actions of one disgruntled employee working under harsh conditions. As a last act before being fired. he goes on to disable all of the security protocol of a Buddi doll before its sent out for delivery. Once this Buddi, who eventually also adopts the name Chucky, arrives prior to Andy's birthday, things seem to be going perfect, despite Chucky seeming a little too eager to make his owner happy. An eagerness that eventually turns to some excellent, and creative, murder sequences as Chucky attempts to eliminate anyone who would stand between him and Andy.

Something I enjoyed from the original was its POV scenes during the first half of the film. Despite the opening sequences establishing that clearly, we are going to be dealing with an evil doll, there is still care given into trying to convince the audience that Andy is actually the one committing these murders under the influence of his doll. At least, that's how it seems to everyone around him. It's not until well after the second kill of the movie that we are given the revelation that Chucky is, in fact, the murderer. While it could be argued that what they were seemingly setting up, a child who murders under the direction of his doll, could be a more interesting and visceral premise, I still enjoyed the genuine effort put forth to switch things up on us early on.

A big point of contention before the remake even released was the look of its Chucky doll. Now, while the Chucky of the original doesn't necessarily look great (A look I feel they didn't improve upon significantly until 1998's Bride of Chucky), i've got to give it a bit of an edge over the remake. While I liked the unsettling, uncanny look of the remakes doll, with its vacant look being juxtaposed with a technological marvel of rage whenever its eyes would go red, the practical effects on the 88' Chucky felt they had a bigger punch during the scene where Chucky is revealed to Karen to have been alive the entire film. Anyway, I'll still maintain they did a better job with Chucky 19' than I expected at least, those early promotional shots were rough. 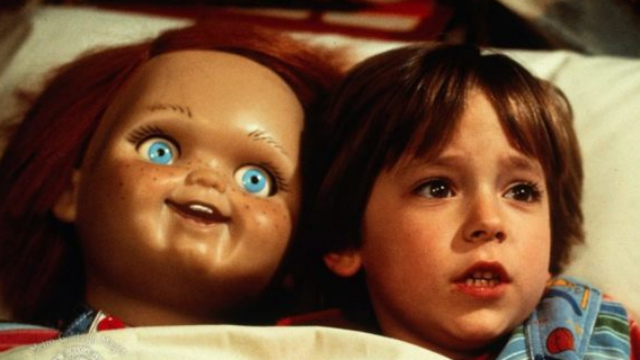 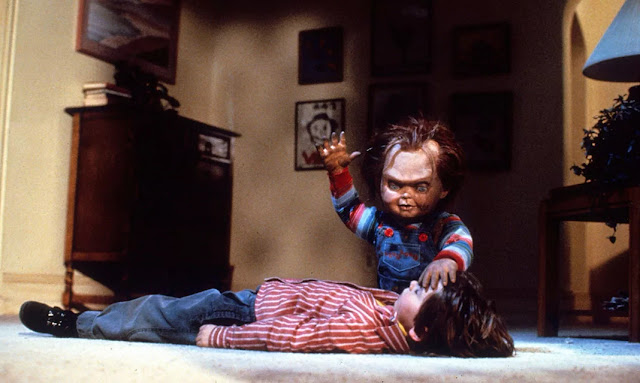 Sara: Being a child born in the eighties and raised in the nineties, I am a full-fledged nineties baby. I honestly cannot remember the first time I watched Child’s Play, I feel like it was a movie that was almost always on TV or picked up in a stack of Blockbuster rentals. That being said, I don’t think that I actually paid any attention whatsoever the cast until later in life. Brad Dourif, plays Charles Lee Ray, as well as the voice of Chucky, and I was mostly familiar with him as Luther Lee Boggs from The X-files. Luther Lee Boggs was a very creepy psychic on death row on the show, and most of his scenes were unsettling ones with Agent Scully. Re-watching Child’s Play later in life with Luther Lee Boggs lingering in my thoughts while Brad Dourif runs across the screen and possess a doll works in an exceptional creepy way. Also from the nineties we have Catherine Hicks from Seventh Heaven, one of the most cookie-cutter TV series of that era (barf), playing Karen Barclay, a single mom struggling to make her only child happy in Child’s Play. She was such a remarkable choice for this movie, because she always seems to be cast in these genuine, good-natured roles. Watching her finally realize that her son is telling the truth and that their lives are being terrorized by a possessed doll is so completely priceless. Once she realizes the truth, she is relentless in proving that Chucky is responsible, no matter how crazy she sounds, or what kind of danger she puts herself in. Adding Chris Sarandon (who I mostly know from Fright Night, 1985) as the detective, was just the cherry on top of casting choices.


Moving along to Child’s Play 2019, I am not going to lie, I was slightly confused/intrigued at the casting choices for this film. I was fully expecting the loud joker laugh from Batman: The Animated Series once I saw that Mark Hamill was voicing Chucky. There were zero joker laughs, but holy hell, what a pure voice for an AI doll gone wrong. Hamill hits the mark perfectly, and zero joker laughs were needed (even if I did secretly want them). Aubrey Plaza was another casting choice that raised my eyebrow because as much as I love her dry sarcasm in pretty much everything I have seen her in, I wasn’t so sure how she would do as a Karen. Another pleasant surprise as the entire tone of this version of the film was different from the original. Having a young, sarcastic mom was pretty on-point in this version, and her one-line jokes and little quips worked perfectly. The kids in the movie felt like they could have been besties with the little shits in IT: Chapter 1. A decent job of having their own little personalities, as well as being asshole kids, because that’s what asshole kids do. 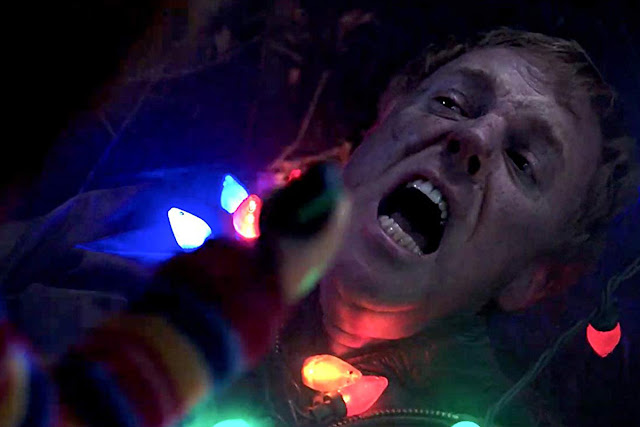 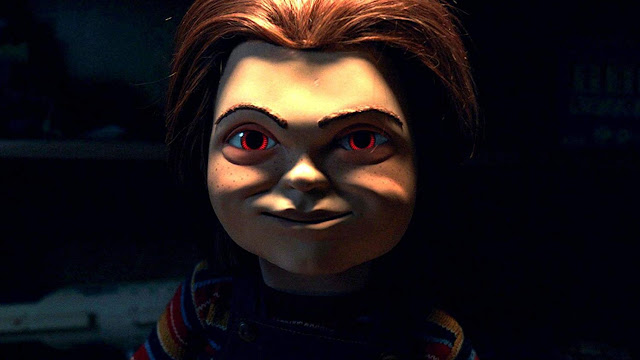 What are your thoughts on Child's Play (1988) vs Child's Play (2019)? Let us know by leaving us a comment here or in our Facebook group, Coven Creeps, located right on our Facebook page. For more spooky shit in your feed, follow us @FoxyCatCoven on all forms of social media. Until next time, keep it creepy, kids!
Media Massacres