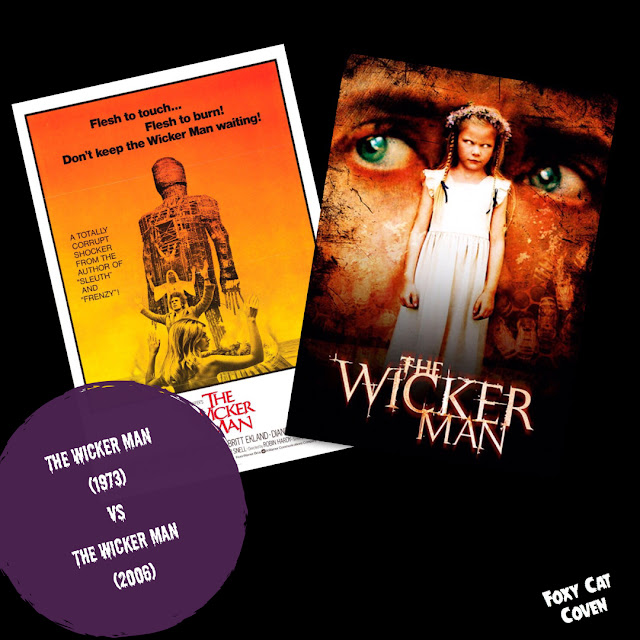 Jeremy: Happy Wednesday, Creeps! With us having dedicated the past few months to our Sinister Pairings feature, we figured it was time to bring back a past favorite - The remake vs. original! Inspired by the upcoming release of Ari Aster's follow-up to the 2018 smash hit Hereditary, Midsommar is set to hit theaters this August with heavy Wicker Man vibes seeping throughout its theatrical trailer. Add in the summer season finally creeping up on us, there's no better time to take on a heavy double dose of Christopher Lee and Nicholas Cage mayhem. So, a little about the overall plot tying both films together - The Wicker Man is the story of the island of Summerilse, its inhabitants, and the events that occur when they are visited by a cop in search of a missing girl. Set during the days leading up to the islands May Day celebration, officer Neil Howie (Edward Malus in the 2006  remake) is placed in the role of detective, as he slowly begins to unravel the strange occurrences on Summerisle. Where no one is as they initially seem.

I'm going to come right out of the gate and talk about something I liked in the remake. The bees. No, that unintentionally hilarious ending torture scene. I'm talking about switching things up and focusing on something a little truer to life - The bee population controlling the well-being of a society. For me, this was one of those instances I enjoyed, where a remake decided to do something different from the original, without drastically changing the story. While the script of the remake could be best described as a train wreck you can't look away from, I can still look back and appreciate moments such as: The only honey available on the island being store bought (due to the previous years failed harvest) and the fear factor added in by Nicholas Cage's bee allergy. The original film depicts a different scenario, with the islands success being on a new strain of fruit, developed two generations previous. A strain the residents of Summerisle believe is dependent on their appeasement of the old gods of the island. While both films play upon this concept of sacrifice, the remake seems to me to have a bit more realistic backing to it, especially up against what we face in modern society. But, lets be honest, the originals idea is far cooler and wacky, and my preferred way of telling this aspect of the story. 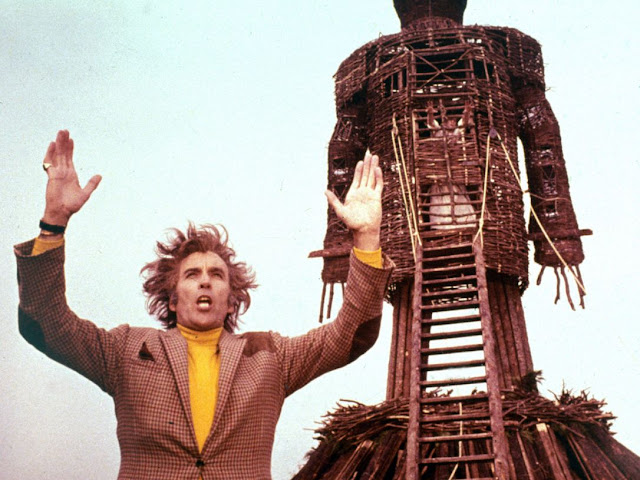 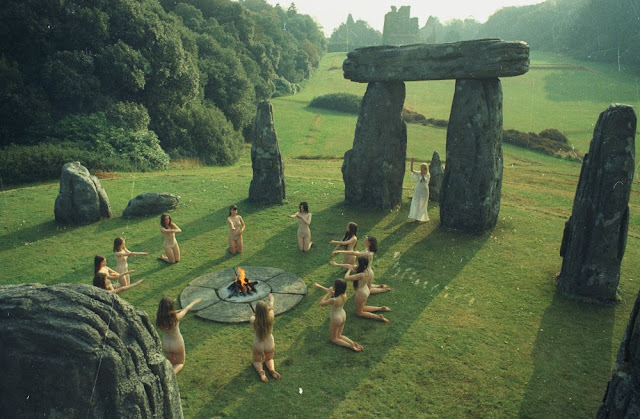 The curse (and sometimes blessing) of remakes is they are often tasked with expanding upon the original, be it through adding new characters or revealing further details of something only previously implied. The Wicker Man 2006 took it upon itself to answer the question no one asked - Just what was the police officer doing before he landed on Summerisle? In concept it's possible to make this method work. Suspense can be built in a way that raises the personal stakes of our hero, showing us what he stands to lose. But Wicker Man 2006 handles this so poorly that we both learn nothing substantial about our lead, nor do we care about those he leaves behind. The original film handles this character building well by beginning on the island, and revealing small details about our lead throughout. You find a vast difference in characterization between the two films with these leads personal convictions regarding religion. Original Wicker Man's protagonist is all about his Christian beliefs, projecting all of his bias on his every interaction with the residents of the island. This add an extra level of conflict that I enjoyed, something the remake sought to do away with. Instead, we are left with a lead whose generic sense of the world ends and begins with, "I'm good, they're bad". A really missed opportunity.


Sara: When Jeremy said that he wanted to do The Wicker Man for our OG vs Remake post this month, I was excited. I had never seen either versions of the film, and with Midsomar on everyone’s radar (including these creeps), I felt like some folk-horror was in order.  Because the internet exists, I knew going in that most everyone in the horror community prefers the original over the remake. However, I am known to not completely shun remakes, so I was going into my first-viewing of both films completely open-minded.

The original 1973 version of Wicker Man had a perfect blend of creepiness and comic relief, and really homed in on the folk theme with…a lot of folk music. Don’t get me wrong, the musical aspect of all the singing really created a disturbing effect paired with the dark theme of a missing child and the “dark side of paganism”. There is just a lot, like, a lot a lot of singing. It is most appreciated in the final scene where the Sargent is being burnt alive among the inhabitants of Summerisle, their joyous singing and dancing with a grown man’s screams of terror and pain in the background are astounding and works for creating an original horror scene. It is very disturbing and haunting, and I really appreciated it.

The 2006 remake excited me when I took a glance at the cast, because there is a solid one! Nicolas Cage, I could easily take or leave, but after his performance in Mandy, I am eager to watch his earlier work. I loved Leelee Sobienski in the nineties, so it was cool to see her in a later role. Most notably was the casting of Ellen Burstyn, who I did not recognize from The Exorcist, even though that is the film that scared the shit out of me and started my obsession with horror. Also, James Franko is in this, and that really isn’t important because I kinda-sorta think he is a terrible actor (sorry about it).  So, all things considered, I thought that the remake would turn out to be decent, I was wrong. There are some pretty solid moments, when Nicolas Cage is running through the main house on Summerisle, looking for Ellen Bustyn’s character and stumbles across a calm woman, covered in bees. The slightly tighter back-story that makes for a more convincing plot works here, however, as in true mid-2000’s form they go overkill with it, leave a little mystery, people! The woman of Summerisle is all beautifully eerie, and I really enjoyed watching Nicolas Cage’s character sort-of squirm under their authority. The biggest disappointment in the remake was its terrible attempts at nods to the original. 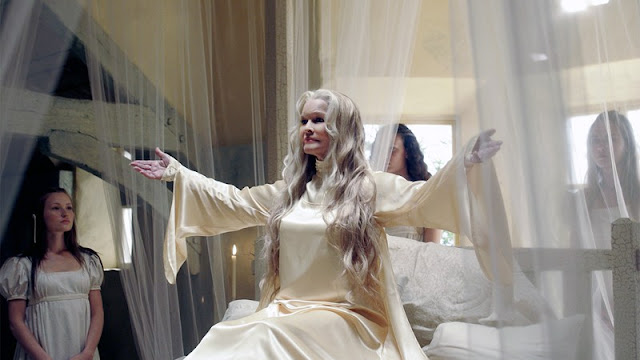 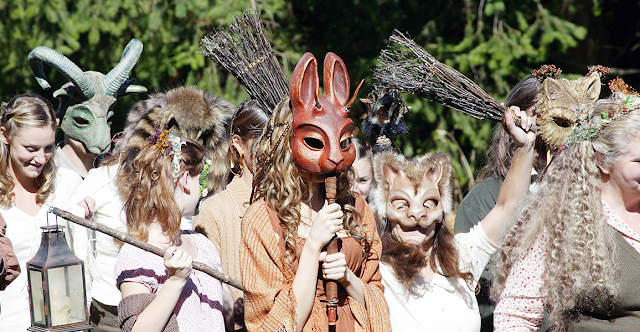 In the 1973 version, the Sargent attempts to leave Summerisle in the beginning of the third act and is faced with a plane that will not start. He is showing signs of frustration, completely unaware that there are men in animal masks starring at him from afar, spying on his every move. They slink back in to the bushes, so that he is completely unaware of their presence. The remake makes a fair attempt to recreate this creepy imagery, but chooses a different place in the final act. Nicolas Cage is running around the main house and three women are watching him from the garden, with animal masks on. This attempt at keeping some of the originality to the film falls a little flat after that awesome lady-covered-in bees’ scene that I mentioned earlier. Another failed attempt was a little girl pretending to be passed out/asleep/or even dead hiding in a closet and falling onto the Sargent, startling him. It worked in the original because there was some build-up, and the Sargent had been searching the homes of Summerisle for a minute before coming across the prankster. In the remake, it happens suddenly, with the mother of the house going from angry to laughing at his expense within moments. It makes for some unconvincing emotion, something that is not needed in the final act of the movie. My last complaint was the very final scene of the wicker man, completely on fire, his head falling to the ground. This happens pretty organically in the original, whereas in the remake the head is simply shown already be falling, as if it was intended to fall first. These little nods just seem so forced and paired with the unnecessary flashbacks, the remake was very messy and repetitive.

Well, what do you creeps think? These OG vs Remake posts aren't necessarily meant to pin one up against the other to say which one is better, but rather compare and contrast and we love hearing your feedback! You can leave us a comment below, or hit us up on all of our social media @FoxyCatCoven, and be sure to join our group: Coven Creeps, located right on our Facebook page. Until next time, keep it creepy, kids!