Texas Fries At The Last Drive-In 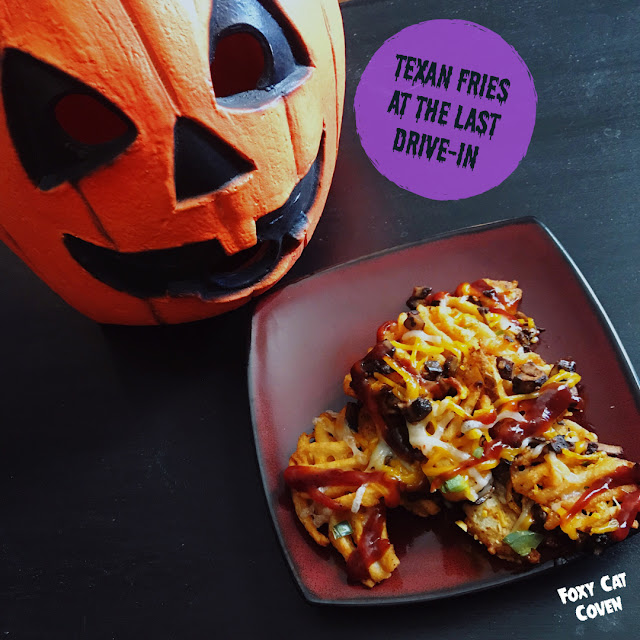 “We are the Drive-In mutants. We are not like other people. We are sick. We are disgusting, we believe in blood, in breasts, and in beasts. As long as one drive-in remains on the planet earth, we will party like jungle animals and we will boogie till we puke. The drive-in will never die.”

Sara: From Vampira to Svengoolie, dozens of horror hosts have graced our television screens since as early as the 1960’s. Even with big-name icons joining the ranks like Rob Zombie, and Vincent Price, the most popular horror icon is arguably Elvira, Mistress of the Dark (portrayed by the amazing Cassandra Peterson). To this day her face is immortalized on T-shirts, coffee mugs, posters, etc. and her line at horror conventions is anything but small. With a spooky-yet-sexy presence, Elvira managed to get you through even the worst b horror movies with not only her sex appeal, but also her sarcasm and excellent sense of humor. Elvira also came from the age that the current horror community seems to be completely enamored with: The 1980’s. That nostalgia train is a very beautiful ride, and with everything from retro-themed shows like Stranger Things, to the reboot of Heathers, our generation is dying for a taste of the past-even if it was before our time. Personally, I am a pure 90’s kid at heart and although I too have a soft spot for 1980-everything, I have to admit that Shudder’s idea to bring back a horror host from both the 80’s and the 90’s was more my speed: Joe Bob Briggs.

Joe Bob Briggs started movie hosting with Joe Bob’s Drive-In Theater after a successful one man show, An Evening With Joe Bob Briggs, but Jeremy and I mostly remember him from his work in the 1990’s: MonsterVison. In 2018, Shudder brought back Joe Bob, a mail girl (Darcy), and all the enthusiasm us mutants (Joe Bob fanboys and girls) could muster with The Last Drive-In. 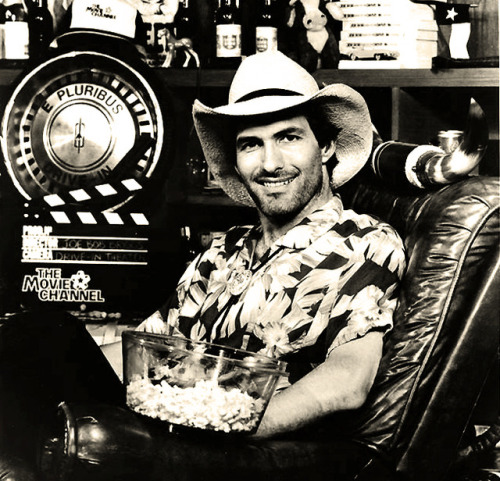 Jeremy: While I can recall a huge level of hype leading up to the release of The Last-Drive In with Joe Bob Briggs, it mostly went under our radar. Enough so for us to, unfortunately, not be present when the 24-hour marathon first streamed through Shudder's service. Arguably, and backed by Briggs himself, watching the marathon live and in person was the intended way to watch The Last-Drive In, despite all thirteen films now being available to watch at your leisure on-demand. And what a test of endurance that would have been. Luckily for us drive-in mutants, the films chosen were of both extremely classic entertainment (Re-Animator, Hellraiser, Sleepaway Camp) and perfect drive-in schlock (Blood Feast, Sorority Babes of the Slimeball Bowl-O-Rama, Pieces).

You don't have to ask us to know that The Last Drive-In marathon was a huge success for Shudder, leaving me with the feeling that there has been a massive upheaval in appreciation for the horror host. Joe Bob Briggs is back in top form, following the same format he's used since his Monstervision days, with drive-in totals, "commercial breaks", and even more of his signature brand of Texas infused humor. And, due to his popularity with modern day horror fans, things could only get better from here.

A majority of the films shown for The Last Drive-In were actually ones both Sara and I had never seen before, further adding to the nostalgia of being introduced to something new and unheard of. Looking back I feel there was hardly a dud in the bunch for what was shown during the marathon. Both Sara and I had a personal favorite in the 1971 Belgian Lesbian Vampire film - Daughters of Darkness, while I also took a liking to my introduction to cult director Hershell Gordon Lewis and his ultra-violent proto-slasher, Blood Feast (1963). In addition to the usual commentary before and during breaks of the films, Briggs had a couple special guests in the likes of Felisa Rose (Angela from Sleepaway Camp (1983)) and Lyle Blackburn (Expert on The Legend of Boggy Creek mythos). All this would pay off in the end with The Last Drive-In becoming a huge success, first leading to two holiday specials: Dinners of Death for Thanksgiving, and A Very Joe Bob Christmas special. Each of these specials covered four films, with Joe Bob's coverage of Blood Rage (1987) being a personal favorite.

In a final stroke of good luck for the Drive -In Mutants, this success led to what is now a full-on series, theme song and all. Having just completed their first season last month, the weekly format returned with double features every Friday night, streaming once again on Shudder. With a second season on the way after a high level of demand, The Last Drive-In with Joe Bob Briggs continues to prove that the drive-in culture will never die. 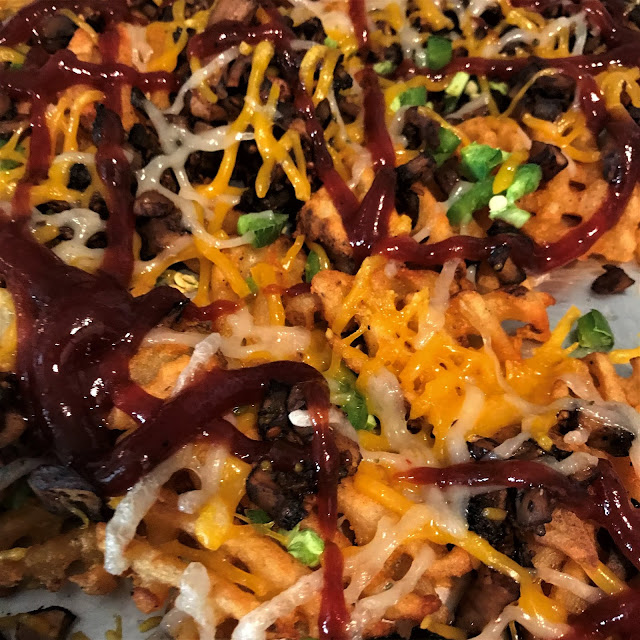 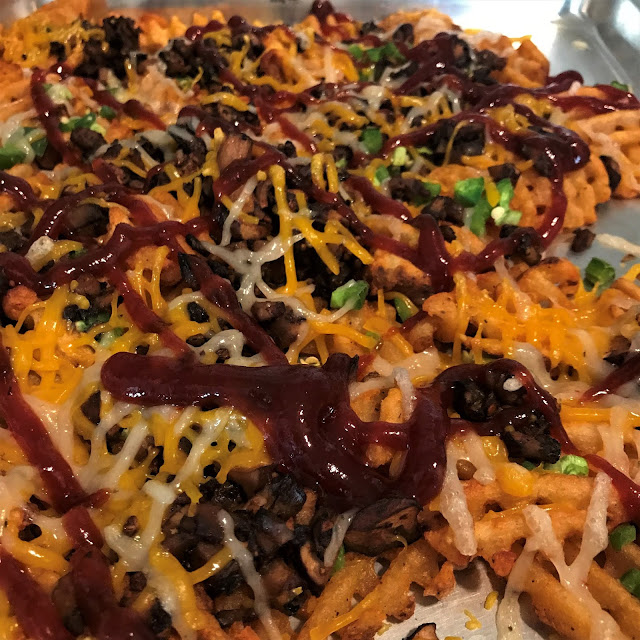 Sara: What makes Joe Bob Briggs so special among the large array of horror hosts? It could be his rants, his ability to completely trash a movie (C.H.U.D. anyone?) and yet still tell you to go watch it. I think it is honestly his ability to make himself both annoying and completely adorable to his audience, like his has managed to make himself the horror community’s dad. Jeremy and I wanted to make a spooky eat fit for the man who gives you all of the shit for liking terrible movies, and yet still manages to win you over with that Texas charm: Texas Fries! If you haven’t noticed, all the recipes we have posted have been vegetarian friendly as Jeremy and I are in fact, vegetarians. We did however pick one that carnivores could sub or even add meat to. I think chicken, beef, or even steak could be swapped for the mushrooms, or, bacon could be added to keep it simple. The recipe we chose for this post was from Rabbit and Wolves, with a few minor tweaks:

We subbed the picked jalapenos with regular ones, I just chopped them and added them in with the cheese before putting in them in the oven for the last few minutes. I also used a mix of vegan chedder and peperjack cheese, simply because it was there and I could. We also are fatties and used an entire bag of waffle fries instead of half, because it looked like there were going to be a lot of toppings (and there was!). Lastly, our barbecue sauce of choice was Sweet Baby Ray’s because that shit is amazing. 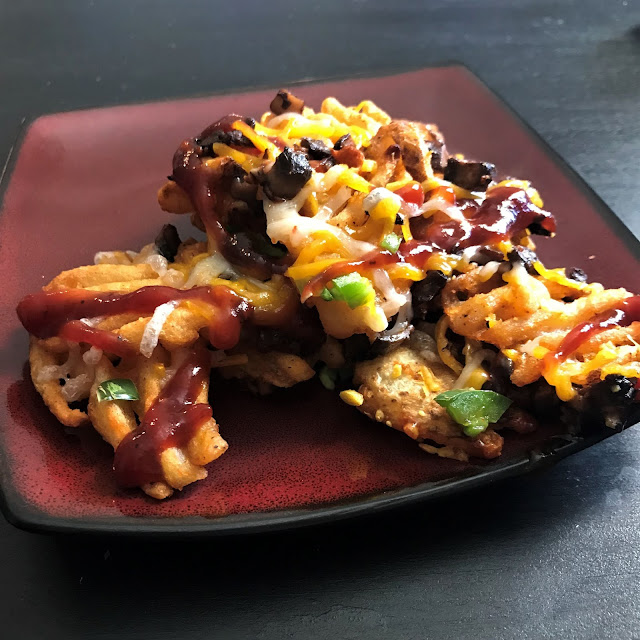 This week we are celebrating all things Slasher for #SlasherFilmWeek over on Instagram, but you can find our post on all of our social media @FoxyCatCoven. You can also join our spooky group: Coven Creeps, located right on our Facebook page! Just send us a request to join and we will add you right in. With one post in, we are already ahead of last month, and we still have more creepy goodness coming this month, so stay tuned! Until next time, keep it creepy, kids!
Spooky Eats