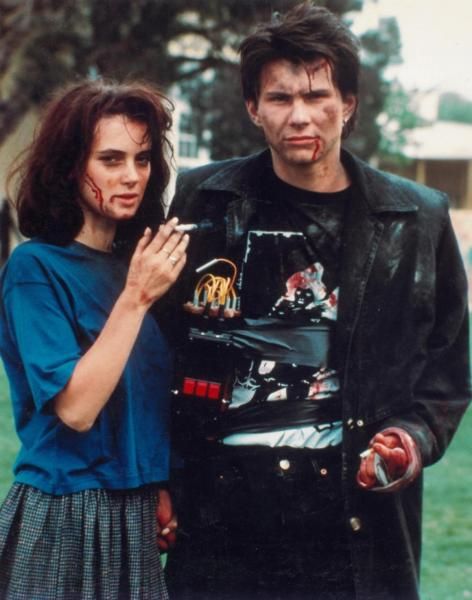 Over the last month, there was quite a buzz going around Instagram through the horror community. Many IG users treat the social media platform as just a casual outlet to share their daily activities, but many others use it as a tool to discover other accounts in their respective communities, usually through a series of hashtags. During the month of March, Instagram made a decision that put a damper on horror fans who wanted to utilize the horror hashtag. Not only are users prompted with a"Can we help?" pop-up when searching #Horror, after selecting the "See posts anyway" option, users are only allowed to see the Top #Horror photos, not the recent. Why? According to the message Instagram decided to leave, they have hidden posts marked #Horror to protect their community from content that may encourage behavior that can cause harm and even lead to death. 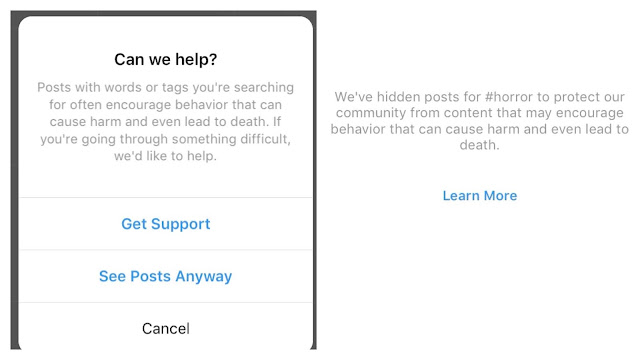 Although there are other hashtags such as #HorrorFan, etc, #Horror was the quickest and the broadest search for fellow Instagram accounts with similar content. In retaliation, some users have begun to use #NotHorror as a way to help the community snark-back at Instagram, as well as continue to find each other on the social media platform. In celebration of #NotHorror I have decided to share with you creeps some of my favorite Not Horror movies in a genre that the horror community might appreciate: Dark Comedies. 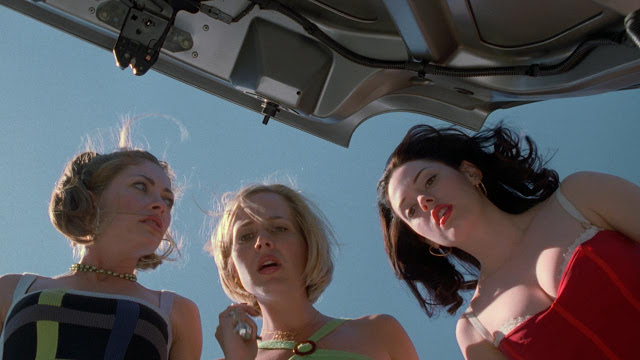 Jawbreaker (1999): Three of the most popular girls at Regan High accidentally kill the prom queen when a kidnapping goes horribly wrong.

Inspired by Heathers (1989), Jawbreaker was the film my parents wouldn't take me to see my freshman year of high school, but once it hit the rental shelves at Blockbuster, it was a requirement at every sleepover. Not entirely horror-comedy, not-entirely a chic-flick (possibly compared too much to Heathers?) this film was a failure at the box office, though it has gained a cult following over the years. This teen makeover flick with a sadistic twist is choc-full of 90's nostalgia, everything from the bomb soundtrack featuring the likes of Letters to Cleo, and Imperial Teen, right down to those adorable spaghetti strap tops that would have gotten you sent home before first period. Much like Weezer's Pinkerton, this gem was created for our older siblings who just didn't appreciate it as much as millennial's would. 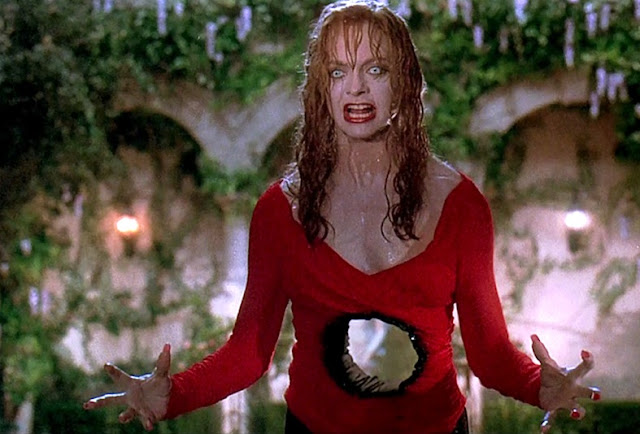 Death Becomes Her (1992): When a woman learns of a immorality treatment, she sees it as a way to outdo her long-time rival.

If this film looks familiar on this blog, it is! We added it to our runner-up list of our Top Five Horror-Comedies post. Is it a horror-comedy, is it a dark comedy? It's both.  Originally receiving mixed reviews from critics, this film won an academy award for Best Visual Effects as well as developing a decent cult following. This film defined the term "Frienemy" before it was even a thing, all the while addressing what many people fear on a regular basis: aging. I can't remember the first time I saw this movie, but all I know is that I was obsessed with it. The cherry on top of this flick is Bruce Willis managing to make the audience feel sorry for him, even though he doesn't *quite* deserve it, as he is caught in the cross-fire of the deadly rivalry between Meryl Streep and Goldie Hawn.

Spooky Highlights: Isabella Rossellini (Blue Velvet) is almost unrecognizable, mostly because although I have seen this film over a dozen times, I failed to recognize her without her wig from Blue Velvet. It's kinda like a vampire movie because there are several attractive corpses, only they don't suck blood, they just kinda try to kill each other a little bit.
via GIPHY

Heathers(1988): In order to get out of the snobby clique that is destroying her good-girl reputation, an intelligent teen teams up with a dark sociopath in a plot to kill the cool kids.

This movie destroyed my vocabulary with phrases such as "How Very" and "Same Difference", causing my parents to want to choke me with some corn nuts (see what I did there? Hahaha, I am terrible). Like the previous movies mentioned, this film didn't do well at the box office. However, it did receive high critical praise and managed to earn an Independent Spirit Award for Best First Feature, as well as an Edgar Award. Of course, it later became a cult classic, and even became a TV series, as well as a musical. This movie was a repeat rental at Blockbuster growing up, and I gobbled up each ridiculous moment.

Spooky Highlights: With goth-girl icon Winona Ryder (Beetlejuice, Edward Scissorhands, Girl Interrupted, Bram Stoker's Dracula, Black Swan, Stranger Things) front-and-center of this film, it's easy to feel her angst and frustration in this movie, especially paired with the likes of Shannen Doherty (Charmed), and Christian Slater (Interview With A Vampire), the cast has some horror actors peppered in. However, the most important takeaway from Heathers is the iconic one-liners. After watching this movie, you will forever try to work "Well fuck me gently with a chainsaw" into casual conversation. 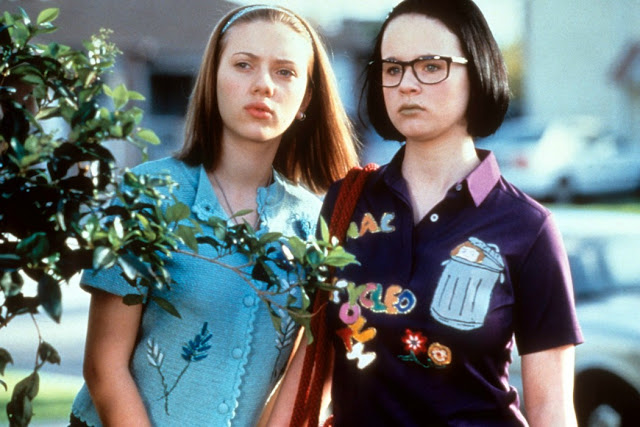 Ghost World (2001): With only the plan of moving in together after high school, two unusually devious friends seek direction in life. As a mere gag, they respond to a man's newspaper ad for a date, only to find that it will greatly complicate their lives.

The 2000's, the beginning of the arguably worst, and my personal favorite, era in cinema. Based on the comic book of the same name by Daniel Clowes, Ghost World was yet another film that didn't make a huge impression at the box office, however it was nominated for the Academy Award for the Best Adapted Screenplay and has since become a cult film. I came across the VHS tape for this movie sometime in high school and was immediately drawn to Thora Birch's character, Enid. She was weird, she didn't listen to her peers or elders, she was a walking existential crisis, she was in short, a sassier (if that were even possible) version of me. Movies like Ghost World and The Craft put the odd girls front-and-center, and I gobbled that shit up.

Spooky Highlights: Okay so this film might be the only one on this list that has zero supernatural, or even murderous elements to it, however, it does deal with one major horrific aspect we viewers are forced to deal with on a daily basis: life! A cheap stretch at including this movie in a list of films that otherwise has legit horror elements in it? Possibly. Again, however, us horror fiends turn to our hobbies to escape the otherwise mundane, and stress that is life. Also, for our horror enjoyment we have as I mentioned Thora Birch (Hocus Pocus, American Beauty), Scarlett Johansson (Eight Legged Freaks, The Black Dahlia), and Steve Buscemi (Fargo). 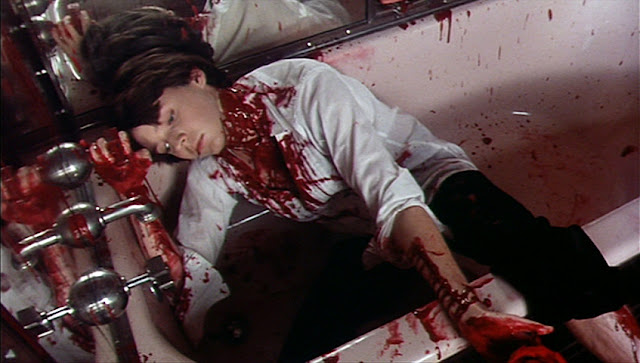 Harold and Maude (1971): Young, rich, and obsessed with death, Harold finds himself changed forever when he meets lively septuagenarian Maude at a funeral.

Quite possibly one of my favorite movies of all time, this film was critically and commercially unsuccessful when originally released, the film began a cult following and in 1983 began making a profit. It's ranked at 45 on the American Film Institute's list of 100 Funniest Movies of All Time, and was selected for preservation in the National Film Registry of the Library of Congress. There was even a special edition Blu-Ray Criterion Collection released in 2012 that I one day hope to get my grubby paws on. Maude is the OG Manic Pixie Dream Girl, and though she does spend part of the movie helping Harold find some sort of meaning to his otherwise boring life, she also spends a chunk of it terrorizing him as well as the rest of the community they live in. Harold is a bit of a privileged little shit, but his monotone dialogue and dry sense of humor blends perfectly with Maude's free-spirited disposition. Also, they love crashing funerals.

Spooky Highlights: Ruth Gordon is most known in the horror community as the witch-next-door in Rosmary's Baby, so seeing her in a role that is equally humorous but otherwise completely the opposite of that character is pretty fascinating. Bud Cort was apparently in  Dogma and The Life Aquatic, and... those aren't horror films, and I don't remember him. However, he is great at faking his death in this movie, and obsessed with hearses, so at least he has the aesthetic down. Paired with a soundtrack composed of Cat Stevens songs exclusively, it makes for a very interesting juxtaposition.

So what's the lesson we learned today, Creeps? Dark comedies tend to bomb at the box office, but will most likely end up a cult classic in time.From my very unprofessional perspective, I want to believe that it is an issue with marketing. I think these films simply fall victim to not quite fitting in with comedy. horror, thriller, or drama for that matter, and that seems to be unfortunate. Or, perhaps successful dark comedies are simply filed under a different genre.  The only film I can think of off the top of my head that was successful was Blumhouse's Happy Death Day (2017), enough so to generate a sequel, so maybe there is hope for the genre yet.

Lastly, I am going to leave you here with a few more dark comedy recs that didn't make my top five list, but are still fine films worthy of a viewing, or ten.

-Thoroughbreds (2017): Though technically it's listed as a drama/thriller, this one has some decent dark comedy elements to it.

-Jennifer's Body (2007): Fantasy horror about a succubus, as well as some sexual tension between high school girls. The world just wasn't ready for this one.

-Freaked (1993): Independent movie that was written off for simply being "too weird". Good luck finding a physical copy of this gem.

-Dr. Strangelove: Or, How I Learned To Stop Worrying And Love The Bomb (1964): Okay I lied, this one was received extremely well so maybe we just need more political satires (and cowbell).

Fan of any of these films/got a dark comedy rec for us? Leave us a comment below or on any of our social media accounts @FoxyCatCoven. Until next time, keep it creepy, kids!