We All Eat Down Here: A Tale Of Two Currys 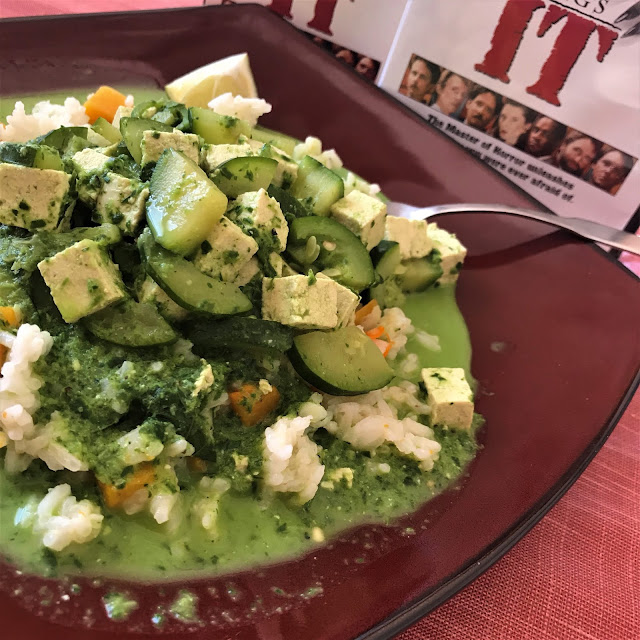 *This post contains some spoilers for the film IT (1990)

Sara: Stephen King aka The King Of Horror, has horror fans everywhere hyped for everything he has planned for 2019 and beyond. Next week we are being blessed with the Pet Sematary remake, and later this year, IT: Chapter 2. It doesn't stop there, Doctor Sleep, In The Tall Grass, as well as plans for a Creepshow series, and Castle Rock season 2 are all in the works, not to mention a few other projects in development. With all of the King hype spam in social media, we thought we would revisit IT (1990) in all of its made-for-TV-glory. We paired it with Martha Stewart's Cauldron Curry (with a few vegetarian changes), because two currys are better than one.

I am not partial to the 1990's version of IT because I did not grow up with it, in fact, I saw it much later in life than I should admit. IT was on the list of movies that my parents didn't see fit for the eyes of children in our household, most likely because a child dies right in the beginning of the movie. Over the years, I caught bits and pieces of the film while at friend's houses, but never sat down to watch the movie in its entirety until a few years ago. In anticipation for the 2017 remake, I made sure to read the book in advance, and had the chance to re-watch the 1990's version as well. I almost always forget just how many horror actors are in this movie, and there are a couple of  awesome ones: Emily Perkins (Gingersnaps), Olivia Hussey (Black Christmas), Tim Curry, duh, (The Rocky Horror Picture Show), just to name a few. Although I am a big fan of the Tim Curry, and the first half of the film, the adult versions of the characters bored me to death. This made-for-TV-feature was going to have its cheesy moments, and I am okay with that, however, almost all of the adult's acting was just so over-the-top, or just plain bad to me. I am one who normally shuns away from child actors in horror films, but the kids were just more convincing to me. I did really like Curry's Pennywise, I thought he did a great job of not only being creepy, but also being almost awkward/not used to his body in certain scenes. Sharp teeth, and blood do aide in his performance, but he does so well with his creepy stare and voice in this film. 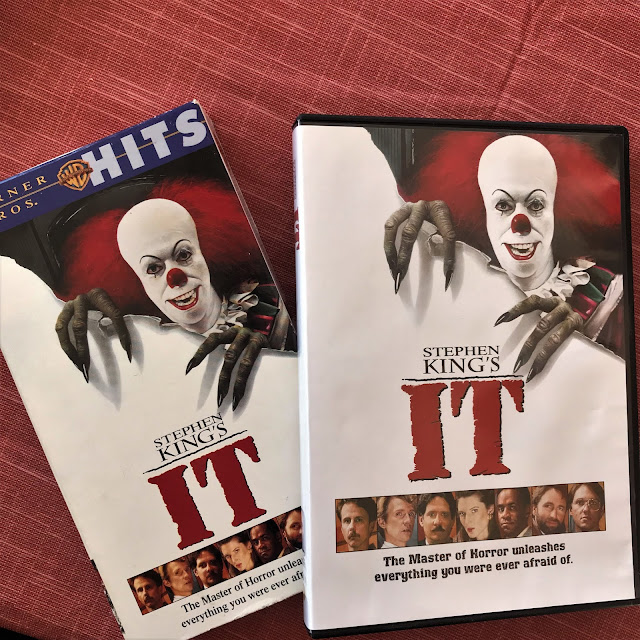 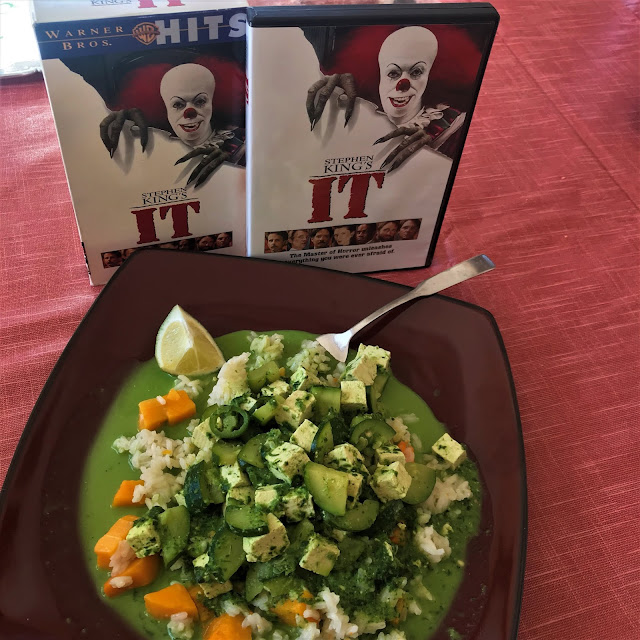 Jeremy: My earliest memory with 1990's IT, came possibly sometime around 97' when my parents picked up a copy of it on VHS alongside the first Scream film. Like The Shining before it, the VHS cover art of IT scared the shit out of me in a way that I never knew clowns could. On the flipside of that however, I would still find myself catching bits and pieces of this mini-series on TV and often finding it to be pretty tame even by my easily frightened adolescent standards. I didn't realize that I attributed this to the fact I was missing out on several scenes that would haunt my nightmares for years to come by only watching bits and pieces of this film. It wasn't until that fateful night I caught the ending of the first half of the mini series, cultivating in Stan's suicide, that I was hit, and hit hard with terror.

I'm going to be up front though and say that this feeling of fright, while lasting for several years into my childhood, has not endured over the years. In fact, when the news that 2017 would see the first half of a remake of Tommy Lee Wallace's 90's classic, I was all for it. While not particularly a fan of horror remakes, I can especially appreciate when there are obvious places for improvement, or even a change up in format from TV series to feature film. But with plenty of hindsight now when looking back on IT 1990, I still can appreciate several things about this admittedly flawed film. Particularly in the realm of the performance of Pennywise by Tim Curry, and some of the choices made in the childhood segments of the Losers Club's journey.

I doubt there are few people out there who would knock Curry's performance, especially with so little on screen violence to add even more to his both terrifying and hilarious persona. For every moment of spot on comedy in scenes of him popping his head up out of a shower drain or trying to hitch a ride holding a balloon, you have great horror moments of him barring his teeth before ripping the arm off an unsuspecting victim or sporting a sinister death glare after getting a face full of battery acid. Much of these scenes are accented by some mostly great performances by both the adult and child casts, many of whom look legitimately scared of what they are dealing with. But while I can commend this movie for being an all around decent horror flick with tons of memorable scenes, it still after all these years has the very clear trappings of a TV film.

Leaving out nearly all of the gore and impactful moments from the novel, this never felt to me like the definite version of what could created out of what I think is the best Stephen King novel yet to be written. While it remains to be seen whether the two-part modern remake can deliver on the level of adaptions like The Shining or Carrie, I already find myself increasing in confidence that it is the definite film version of the IT story. Don't get me wrong though, Tim Curry was an excellent Pennywise that deserved a far bigger budget and film to play around in. But as it stands, IT 1990 is a decent (i.e. worth watching) but water downed version of its source material, with some pretty bad special effects (see: The IT spider monster or the dog head in the mental ward) and next to none of the edginess or hard hitting emotions of the novel.

Sara: Since this recipe isn't mine, I will direct you creeps to Martha's website to get the details, however, I will provide you the ingredients I used as substitution.

-Sub chicken for  12 ounces of tofu, cubed.
-Sub fresh ginger for dried (hey, its cheaper).
-Sub lemon grass...I couldn't find any, so I skipped that shit.

I will also probably add onion and more garlic the next time I make this, and I might attempt to flash-fry the tofu instead of cooking it in the stew. I do have a mortar and pestle, however it is in storage so I used the blender with a few drops of water to make the paste. 10/10, recommend. The recipe also makes extra paste, which is noted to last up to three weeks.

I think perhaps after IT: Chapter 2 hits theaters this summer, a side-by-side, OG vs Remake might be on the agenda for this blog but for now, we can continue this discussion in the comments, or on any of our social media (Twitter, Facebook, Instagram) @FoxyCatCoven or in our Facebook group, Coven Creeps, located right on our Facebook page.  Let us know, is Jeremy being too harsh on a beloved 90's movie? Am I too partial to Tim Curry? Let's discuss! Until next time, keep it creepy, kids!
Spooky Eats