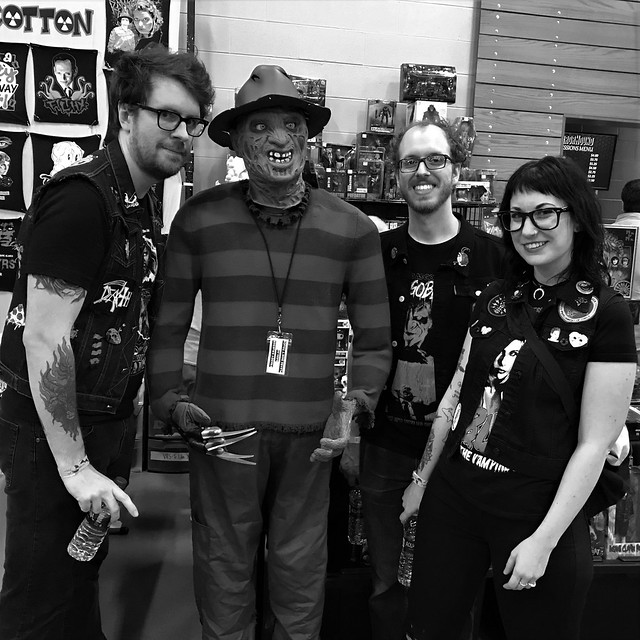 Jeremy: We're a week out from our trip out to Horrorhound 2019 in Cincinnati, OH, and are still feeling the serious horror convention blues. With our next con not being for another month from now in the form of Motor City Nightmares, we'd like to talk to you creeps a bit about the experience we had at our first horror con this year! While our previous convention trip out to Frightmare in the Falls was more focused on small independent vendors, with a few recognizable faces doted throughout, Horrorhound was full of some of our favorite, well known companies. When entering the front doors to the larger of the two vendor rooms, we were immediately greeted by all kinds of Fright Rags merchandise! Having been a fan of them for several years, this was especially exciting for us, with discounted prices on all sorts of things like: Michael Myers mask pins from Halloween 4-6, socks with designs from such movies as Trick R Treat, and tons of shirts, hoodies, and lounge pants.

As with any convention, we had to make several rounds of the large area before even considering what we wanted to come home with. While there was the usual fare for vendors such as Troma Entertainment (with what seemed like every film they've ever released) and Killstar, some of our favorites that we had yet to encounter in a convention setting were in attendance such as: Vinegar Syndrome, Synapse Films, Kreepsville 666, and Terror Threads, the first two being focused on creating some of the best Blu-Ray/DVD versions of horror films on the market. We also encountered several companies we'd never even heard of, but fell in love with such as: Atomic Cotton (featuring neon 80's inspired clothing of horror icons and directors), Little Press On The Prairie (original horror pin designs), and Killer Pillows which is just what it sounds like.

In addition to the large vendor room, immediately adjacent was another vendor area about half the size. But what stood out most here for me was the Ink Fusion booth with a dozen tables set up for anyone looking to get a tattoo. While I personally didn't get anything, and while it seemed nearly always busy here, there's a function on the Horrorhound website that allows you to schedule an appointment with any of the artists. Something i'm tempted to take advantage of next year. 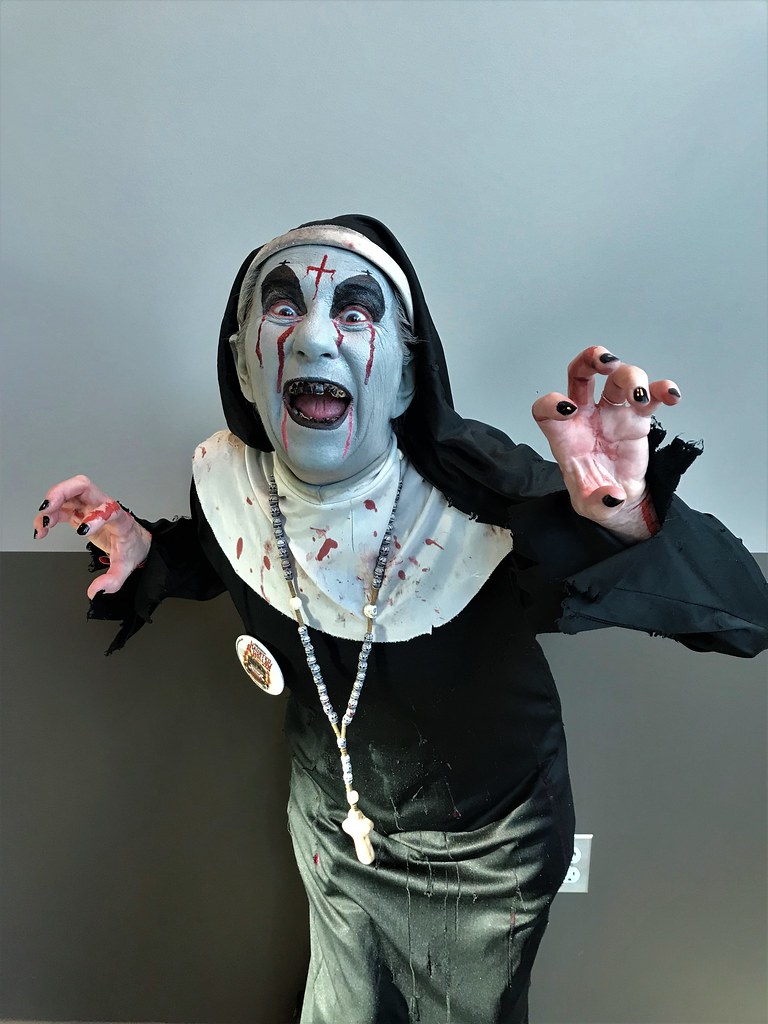 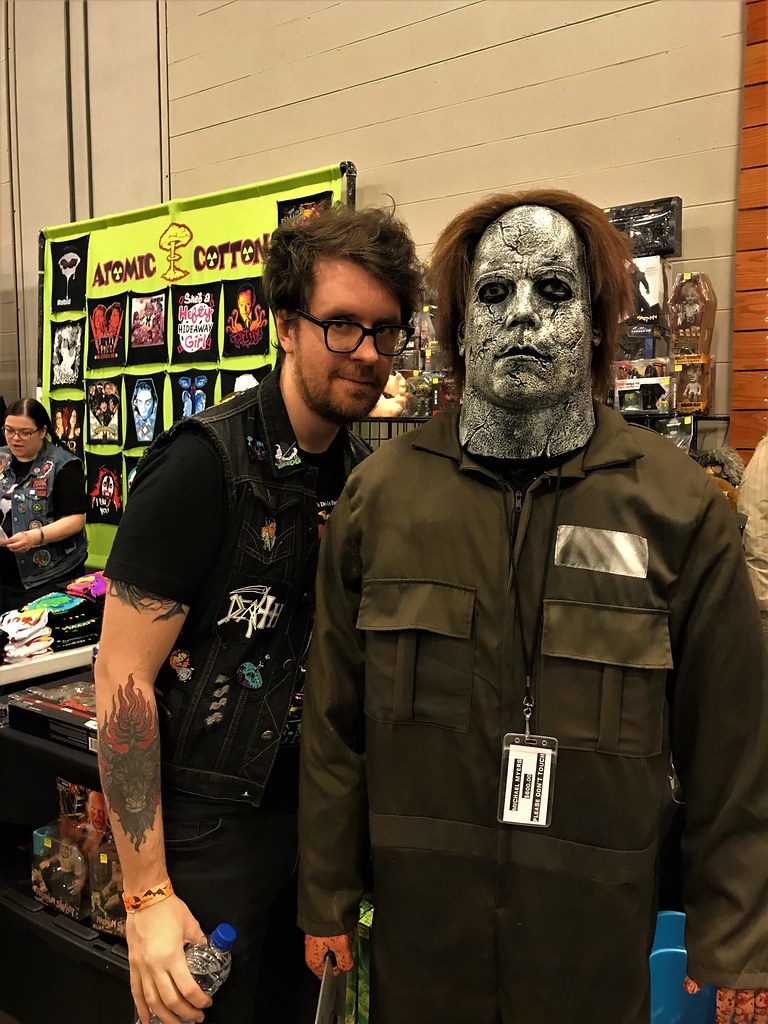 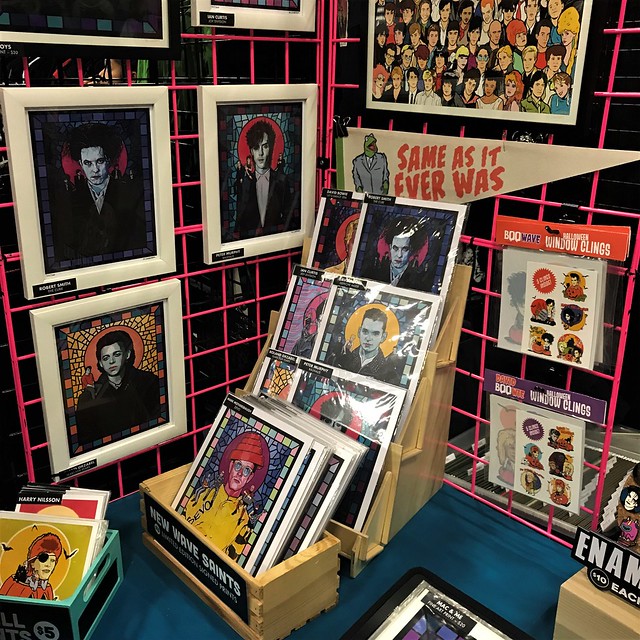 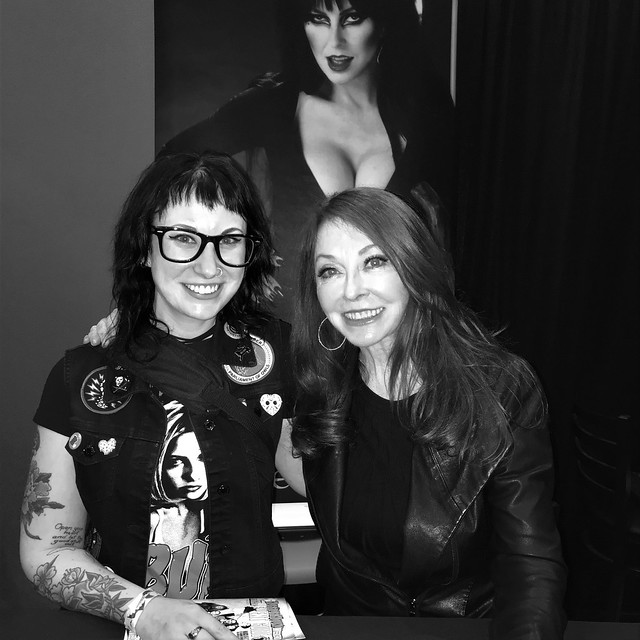 Sara: As you can see, I got the chance to meet Cassandra Peterson, aka Elvira, who had an absolute blast meeting one of our friends who is very voluptuous herself. She was very goofy, and kind, and I am so thankful that I got the chance to meet her. I also got to meet one of my pre-teen icons, Fairuza Balk. She was so very sweet, and even said that I smelled good (patchouli) and I pretty much fan-girled the rest of the day. I wish that I had the chance to take photos with everyone, but my poor wallet could only take so much damage. There was a screening Friday night of a new horror film, Candy Corn, and Tony Todd made an appearance just for the screening. He surprised everyone by staying at the convention on Saturday, but was not available until later in the day so I was so very bummed to not have had the chance to get a photo with him. Definitely on my list for the next convention he is at that we can attend. I adore me some Tony Todd.

Seeing so many cool big-name and indie vendors in attendance is very much a plus, and being able to meet many of my favorite icons in horror is definitely a favorite aspect of horror conventions, but another huge bonus of attending these events is meeting so many other horror fans. We made a few friends, met up with people we knew from other events we attend, and I even found one of my friends from Instagram! Being able to geek out with people who are just as passionate about the shit you like as you without judgement is one of the best feelings in the world.

Speaking of spooky events, we are going to be attending Marche du Nain Rouge in Detroit tomorrow afternoon! If you plan on being in midtown to help rid the city of the Nain, hit us up on all forms of social media @FoxyCatCoven. You can read about this event from our recap post from last year. Until then, keep it creepy, kids! 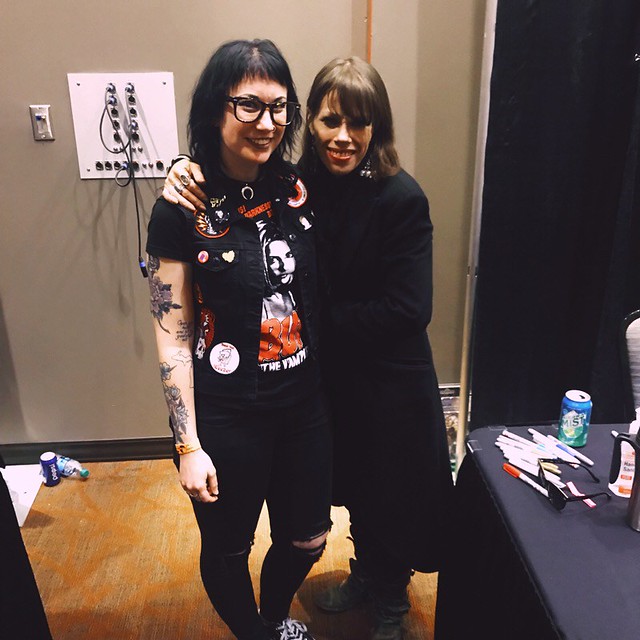 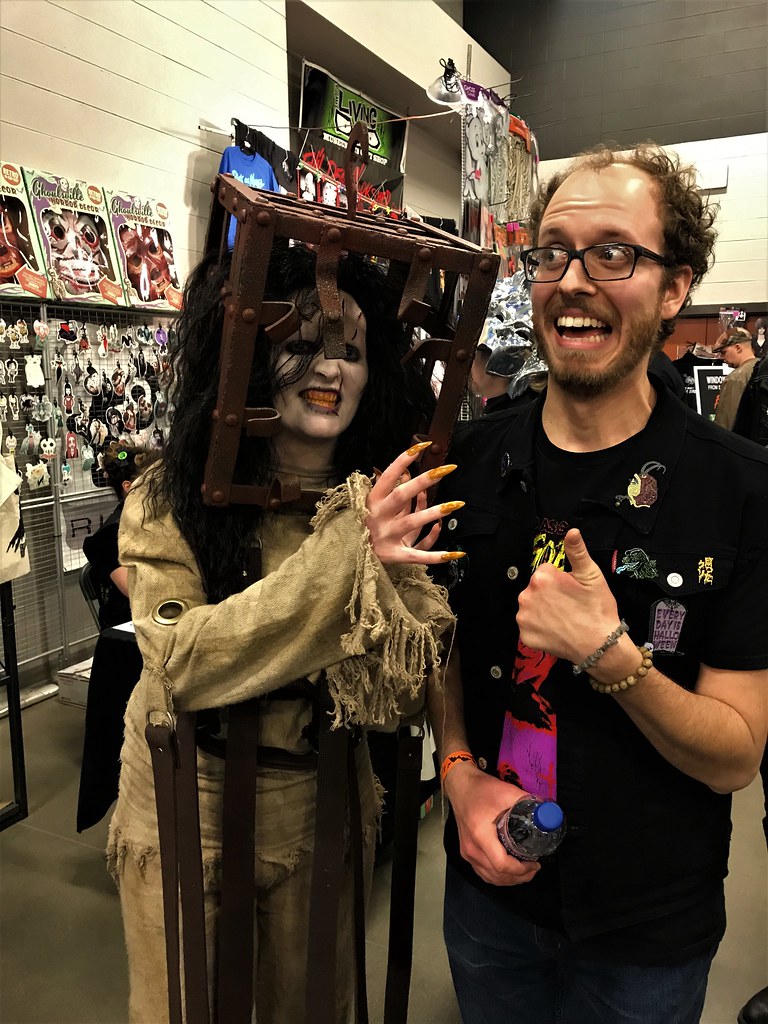 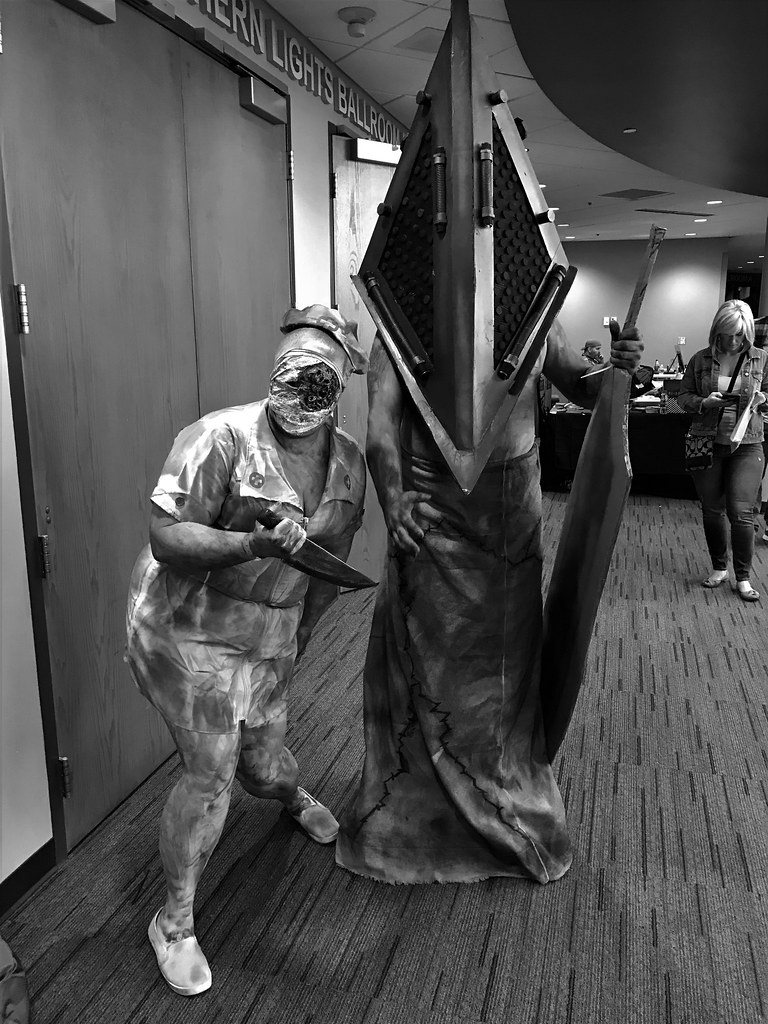 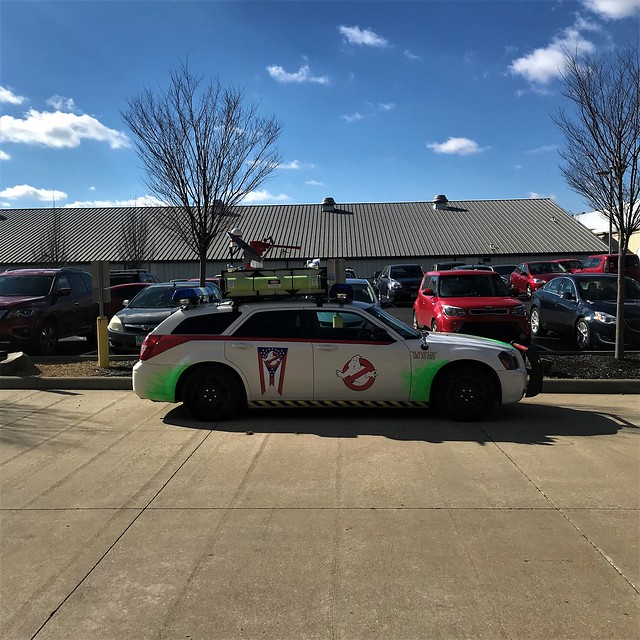 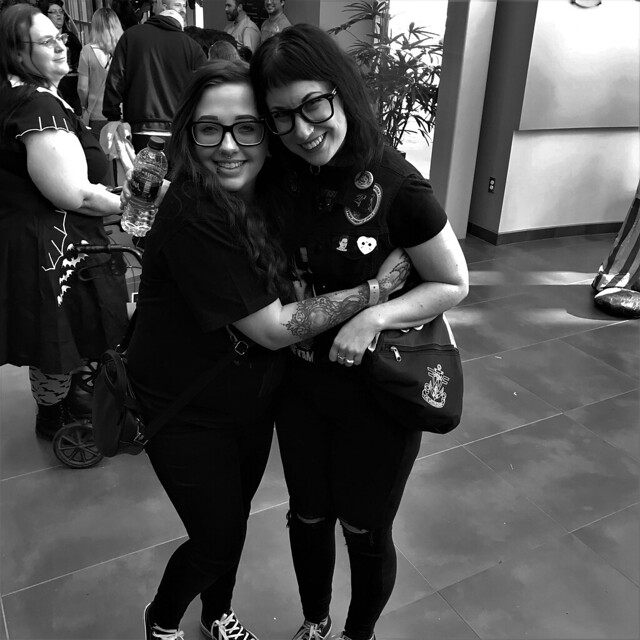