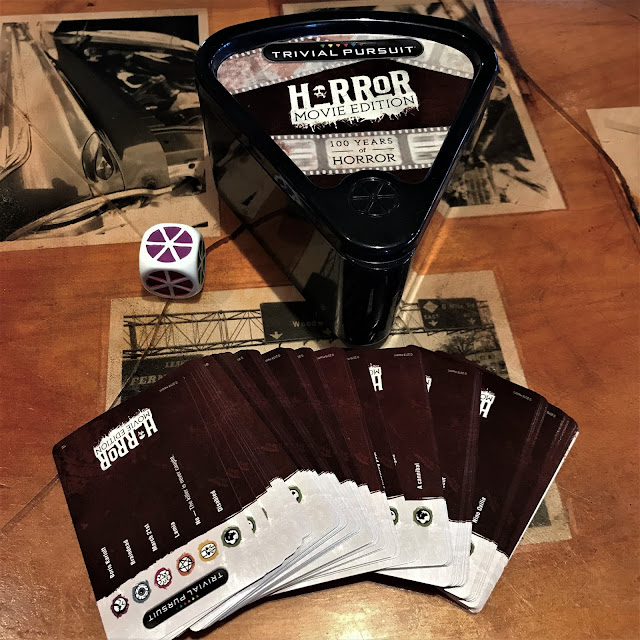 Sara: Over the last six months or so, Jeremy and I have been more interested in gaming. Not just tabletop games, or video games, but with all formats of gaming. When we are not binge watching Buffy the Vampire Slayer, or The Haunting of Hill House, we switch off between the PS4 and the Nintendo 2DS. This has become apparent on the blog, so we added a new section just for gaming, located under the Ghoulish Game Reviews tag. All of our previous reviews are there, and we have plenty more planned for this year.

To kick off today's review, we have one of Jeremy's Christmas gifts: Trivial Pursuit: Horror Movie Edition. We are no strangers to horror trivia games, we really love our gifted set of Slash Cards and we still use them often. Sunday found us running errands but also taking time out for some discount pints at our local brewery, so we brought along the Travel Trivial Pursuit. We sat at the bar, and the small case, stack of cards, and dice were perfect for the tiny space. I found the actual questions to be a decent mix of easy and difficult, and was very surprised when Jeremy and I were neck-and-neck at winning, as I am one who tends to forget names, and dates for everything. Our bartender, and fellow horror fan, even chimed in for a few questions, which makes me want to try to play it with a bigger group next time. 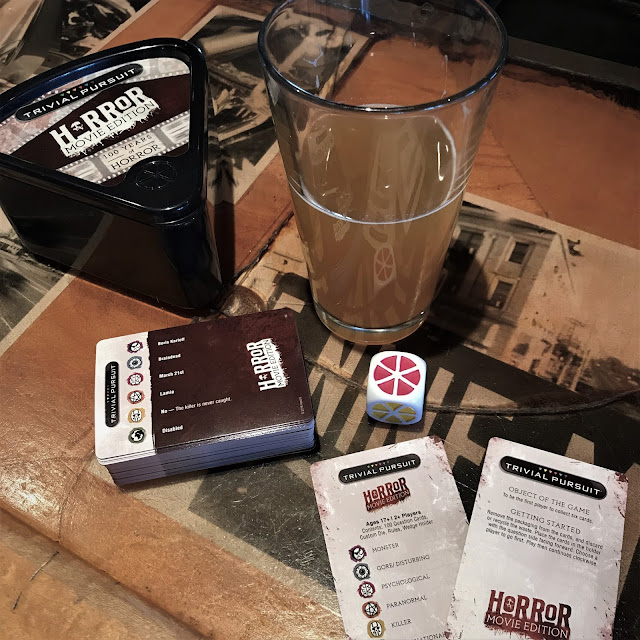 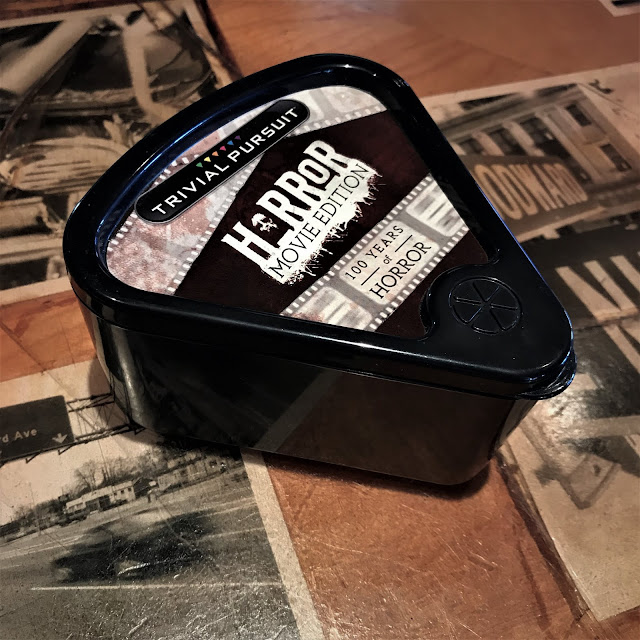 Jeremy: I have always bee a huge fan of horror trivia, so naturally, I knew I was going to find myself obsessed with Trivial Pursuit's horror movie edition of the format. Prior to this game, i've spent years online combing over horror trivia challenges made by fans, some as easy as asking, "Is this picture that of Jason Voorhee's or Freddy Kreuger?" to impossibly challenging, "What did John Carpenter eat for breakfast on the 22nd of April in 1982?". And while i've enjoyed many of them, I never felt a sense of cohesiveness, where the challenge level kept you guessing. I believe this is an important part to feeling satisfied with trivia games, giving the average horror fan the sense that they know things but not everything. And from my play through of Trivial Pursuit: Horror Movie Edition, I can say with confidence that the questions here strike the perfect balance in difficulty, making it a game that is both accessible, yet surprisingly deep.

While I love the horror genre, i'd never claim to know everything there is to know. So, for all the questions where I felt proud of knowing the answer against someone who hasn't always followed the genre, there are several questions for films that are very well known, yet ones I have yet to see and thus was stumped. I've never been great with names of actors or actresses, and with this being a form of question that came up relatively often, I almost always failed here. But on the flip side of that, I tend to have a pretty good grip facts pertaining to directors of horror films, finding more success here whenever I rolled a color pertaining to that type of question. Like our past review of Trivial Pursuit: World of Harry Potter Edition, this game works the same way, with categories such as Monster, Paranormal, and Killer designating what type of question you'll be answering based off what color you roll. And i've got to say, despite feeling that my knowledge is weak in the realm of monsters, we both ended up being pretty fucking bomb at it.

While some versions of Trivial Pursuit feature a larger board game format with character pieces, I could only locate our travel version online. If this does exist though, let us know because i'd absolutely buy this game twice just to experience it that way! But for the purposes of being easy to transport, break out, and play at any moment, this game fucking rocks for horror fans. Horror trivia is a niche that I implore any creators out there to expand upon, if only for the fact it brings together a community of both fans and non-fans alike to discuss their knowledge in a fun way that doesn't breed any negative competition. That being said, I look forward to experiencing this game with as many people as possible, to both learn from them and to see how far i've come in my knowledge of my favorite genre of film. 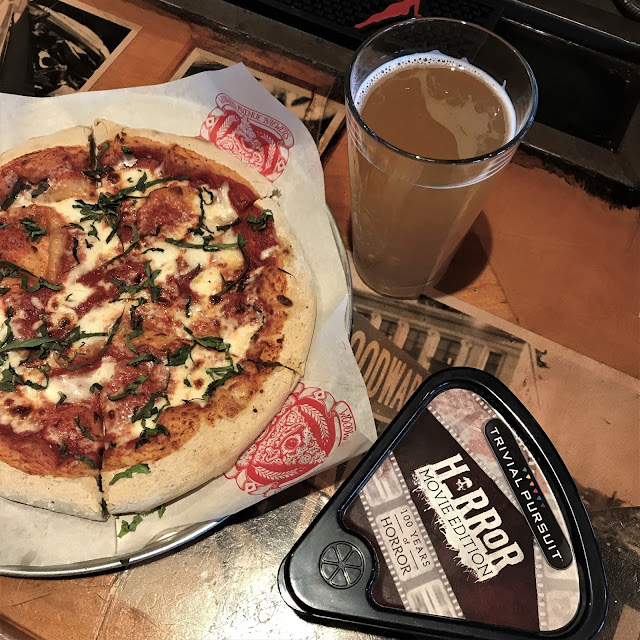 Sara: We have been gearing up this week for M. Night Shyamalan's Glass out in theaters today by watching Unbreakable (2001), and Split (2016). Unbreakable was a first-watch for me, and although I found it a bit of a slow burn, it succeeded in hitting me in the feels like most superhero movies do. Split I have seen about three times now, and it is probably on the list of movies that I feel like I can just re-watch over and over.  I feel like there is something new I have noticed with each viewing, and all memes aside, James McAvoy's performance is pretty captivating (IMO). Anyone heading to theaters to see Glass? What other upcoming horror movies are on your list this year? Let us know by hitting us up on Twitter, Instagram, or Facebook. If you can, please give us a like/follow, we love all of your support and interacting with you creeps keeps us going. Don't forget to join our Facebook group, Coven Creeps, located right on our Facebook page, just send us a request and we will add you in. Until next time, keep it creepy!