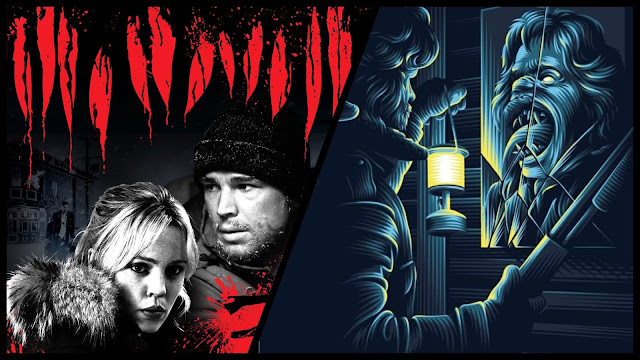 Jeremy: As we continue to find ourselves in the dead of winter, this is the perfect time of year to binge some chilly flicks with plenty of cabin fever inducing terror. Where as films like Trick R Treat, Halloween, and Hocus Pocus define the landscape of the fall season, The Shining, Misery, and the two films we'll be pairing today define what it means to survive through the harsh climate of deep winter time. With themes such as isolation and paranoia being central to all of these movies (and many other within this sub genre), it wasn't an easy task for us to decide which pairing we'd like to highlight for a future double feature. Originally we wanted to do the aforementioned Misery with The Shining, a pairing focusing on Stephen King's crack at some wintry mayhem. But ultimately I suggested we find something to pair with the rapid vampire film, 30 Days of Night (2007), with Sara meeting me halfway with the excellent The Thing (1982). A match made in isolation hell.

A few spoilers lie ahead if you've seen neither of these films, so stop right here, sit down and watch these together, and come back for our thoughts! 30 Days of Night stands out as one of the better films released during what I and Sara consider one of the worst eras in horror (basically around 2005-2010). Starring Josh Hartnett and Melissa George, and taking place in one cold as hell part of Alaska, the story goes that once a year during the deepest part of winter, the small town of Barrow is plunged into darkness for thirty straight days before the sun comes up again. This creating a perfect feeding time for say, some motherfucking vampires, this provides the films large cast of blood thirsty fiends a playing ground to terrorize the residents of Barrow for one long month. The film spends a good deal of its first half hour focusing on establishing the personalities of the many residents of its town, as they begin to notice strange occurrences happening all over the place, including the destruction of every satellite phone available, a couple discovering their pack of dogs dead, and helicopters being found sabotaged. All done to ensure a no survivors policy from the approaching vampire pack. 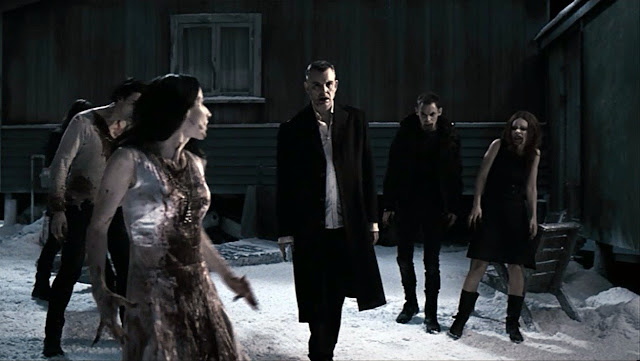 Like The Thing, 30 Days of Night clocks in at a little under two hour run-time. While this can be daunting for some horror movies, I felt the pacing really worked here, with the action happening fast, and the tension building over the long period of time the surviving characters must elude their hunters. Now, with The Thing, our heroes are faced with their own set of paranoia filled problems. Taking place even further away from civilized society in an outpost in Antarctica, The Thing is masterful at creating a sense of isolation that few films can match (save for maybe Ridley Scott's Alien). Starring Kurt Russell in top bearded form, he and the other researchers of Outpost 31 find themselves in possession of a Siberian Husky, who wandered onto their base after being chased there by a pair of Norwegians attempting to kill it. Over time, it's discovered this dog isn't what it seems, and alliances are tested against the harsh climate and eventual bizarre mutations of those who become infected. With some of the greatest practical effects to grace a horror film, the tension is built even further by what gruesome fate has already befallen someone who may look human, yet possesses a sinister secret if provoked.

In their respective genres, I think both films work effectively with what they set out to accomplish. While The Thing is arguably a better film by comparison, I believe that 30 Days of Night is an underrated gem that wouldn't dilute the experience of John Carpenter's classic, when paired together. But just how similar are they really? What specifically makes this a double feature worth your time?

Sara: Why? Well for one, as Jeremy already stated: Isolation. January to late March are filled with bitter evenings where we trade in our trips to the bar to see local bands for movie nights on the couch where its nice and warm, and there are snacks (unless you live in Australia and you are probably currently sweating your balls off)! This is the time of the year where we choose to hibernate, to be isolated, so why not scare the living shit out of ourselves in the process, eh? If you needed any other motivation to stay indoors, wrapped up in blankets like a burrito while watching these movies, the freezing cold settings should help you there.

What are some other similarities? Other than a group of individuals being terrorized by supernatural forces in each film, we also have serious case of trust issues among the survivors in each setting. In The Thing, the shape-shifting alien can take shape of any of the remaining crew, without the knowledge of the rest. This of course leads to paranoia and division among the men, which of course just triples the chances of one of them being replaced by the alien when alone. In 30 Days of Night, the few survivors need to constantly change their hiding places to avoid being found by the gang of vampires stalking the town. Each time they change location, they run the risk of run-ins with said vampires, talk about a catch 22. With each interaction with the vampires, there is a very large chance that one of the survivors will be bitten, and therefore slowly change into a creature of the night, creating yet again, trust issues. Holding a gun to the face of someone you grew up with in a small town, or a crew member you are close with not knowing if they are the enemy, or if they will soon turn on you is completely heart wrenching.

If the frigid settings, lengthy run-times, the isolation and trust themes aren't enough to get you to want to double-feature these movies, then perhaps consider the pacing. There is a reason we are not pairing Interview With A Vampire with 30 Days of Night, despite them both being vampire movies. One is a Gothic love story centered around horrifyingly beautiful vampires, while the other film's vampires are basically a gang of hoodlums. It's difficult to go from something slow-paced to something faster and that's is why The Thing pairs nicely instead, action-packed kill scenes with just enough melodrama peppered in to keep the story relevant.

How about it, have you watched either of these films? Would you pair them together? Let us know in the comments! We also wanna know what are your favorite horror movies to watch this time of year? I for one am a Jack Frost virgin and am debating on popping that cherry. Let us know in the comments below or on any of our social media accounts. Seeing that the high in Detroit this weekend is 12 degrees, we fully plan on busting out the Weezer snuggies and watching something spooky before we brave the cold for a photo shoot we have planned for The Coven on Saturday. You can follow along, and even get a sneak peak, by checking our Instagram stories! Until next time, keep it creepy, kids.
Media Massacres Sinister Pairings