Our Review Of The First Half Of Chilling Adventures Of Sabrina: Season 1 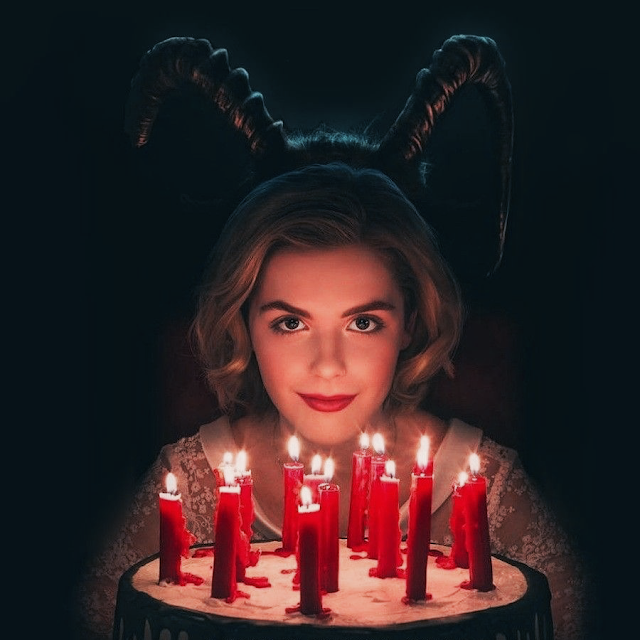 Jeremy: I wanted to start things off by taking a look at my own experience with the show that inspired the creation of  The Chilling Adventures of Sabrina; Sabrina the Teenage Witch. While I was aware of Teenage Witch's existence in the 90's it, whether rightfully so or not, was designated by myself to be something I didn't think I would be interested in. Not a whole lot of reasoning behind it, save for Salem the cat, any of the few scenes I managed to catch from the show just came off as unfunny and a little too after school special for what I was looking for at the time. I've got to be honest though, if only for the aforementioned Salem having several hilarious memes and compilations videos out there, I sometimes think about whether I should go back and give it a chance. But for where my interests lie in the present day, The Chilling Adventures of Sabrina was something I was immediately drawn to for its dark aesthetic and frankness about subjects like Satanism and Dark Magic. And while Sara and I have arrived just in time to give our opinion on a show that's been absolutely killing it in the ratings over the past few months, we just last night finished this bitch and are ready to talk about it. Just in time too, because we finished with the Christmas special and I still haven't let go of the spirit, even if winter in Michigan won't make up its damn mind.

Let's talk about what I liked here first, shall we? There has been some criticism about a certain hazy screen effect being over-used to the point of taking you out of whatever scene is taking place. I didn't personally experience this discomfort and felt it worked perfectly in a dark Sabrina universe for creating the perfect sense of disorientation. And speaking of Sabrina, huge praise for Kiernan Shipka's performance. Already possessing a signature style, while being able to turn from menacing to welcoming in an instant, I already think of her as the signature portrayal of the character. While I knew I was going to love the horror inspired set pieces (and trivia throughout!), I also loved the series knack for keeping you guessing as to it's direction, with plenty of unique "monster of the week" creatures to alter the future motivation of many key characters. While it wasn't exactly a gore fest, I appreciated that the show didn't hold too much back in proving it meant business, providing plenty of throat slits to satisfy newcomers. 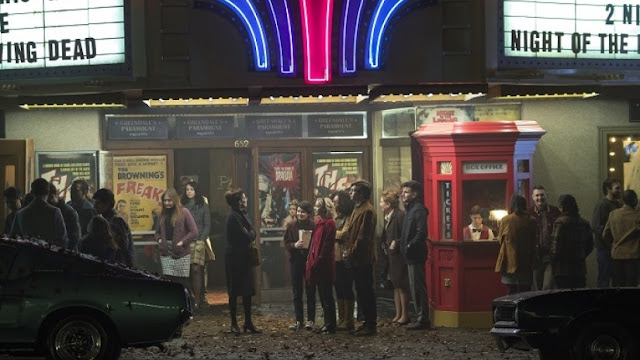 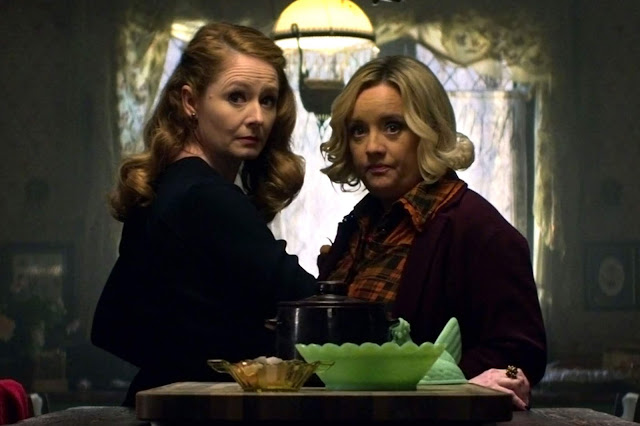 Now my negatives aren't quite as plentiful as I did genuinely enjoy how The Chilling Adventures presented itself. I wasn't a big fan of the high school drama that seemed to be of such little consequence compared to what was going on with the witching world. Thus, a majority of the mortal characters started off as pretty un-interesting and disposable. Thankfully nearly all of them would later be incorporated into the overall story in a more meaningful way, so this is less of a complaint and more of a plea for the writers to keep this angle going. I also found the sub-plot involving Lady Blackwood to be incredibly boring, and something I wish wasn't treated as such a monumental plot point to the direction of the series (at least, for now). And lastly, I felt that until the final episode Madam Satan was neither a menacing or particularly effective main villain, something I hope can be remedied as the rest of Season 1 releases this coming April.

As I mentioned, the positives really outweigh the negatives here, The Chilling Adventures of Sabrina is an entertaining show all around, a surprise hit I would even say. I've felt some serious Buffy the Vampire Slayer vibes while watching (especially with the high school setting), and i'm confident that everyone involved will only continue to improve upon their craft. While I would warn that it is a bit of a naive show (it's clearly meant for young adults), with high school issues that seem to always bleed over into the lives of the older characters, I didn't find it to be cringy to the point that it ruined the show. Just a little gripe. Otherwise, i'd recommend this to anyone, but especially those casual horror fans looking for a lite version of a darkly tinged story.

Sara: We were a bit behind on getting to this show as it premiered while we were away in Canada attending Frightmare in the Falls, followed by an abundance of Halloween festivities, therefore avoiding spoilers was unattainable. I knew going in that the show already had its issues with an incorrect depiction of witches, the practices of Wicca and Satanism, as well as the illegal artwork use of the Baphomet statue (which thankfully has been resolved). As someone who used to practice Wicca many, many moons ago, I have already experienced my fair share of witches being improperly portrayed in media. Willow, from Buffy the Vampire Slayer, as well as The Charmed Ones in Charmed, paved the way for a slightly taboo practice in mainstream media, even if they got it completely incorrect. The way I personally view its portrayal in The Chilling Adventures of Sabrina is the same as I viewed it with the previous shows mentioned: it's make believe. Not everyone is going to agree with me, but that's just my two cents on the matter. I have to say that as hilarious as it is to hear the words "Praise Satan" uttered on mainstream television, it does come off a bit cheesy and forced at times. The demons in the show *cough* baitibat *cough* were a bit less than stellar,  however, if I am going to voice one very large complaint, we all know what that is going to be: 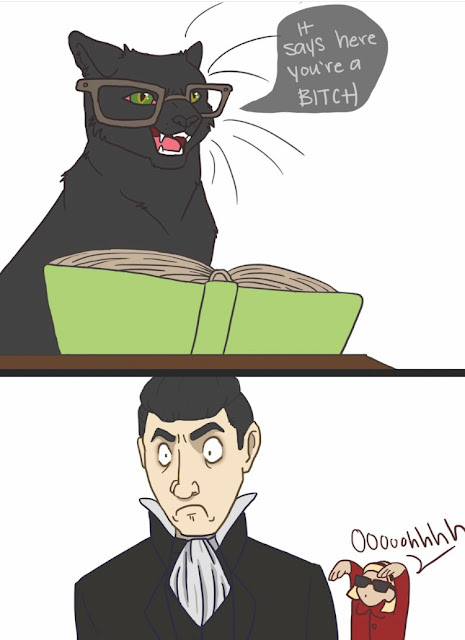 They obviously couldn't let Salem talk on this show, he'd be too powerful.

Piggy-backing on Jeremy's comments on the similarities of Sabrina's character and that of Buffy, from Buffy the Vampire Slayer, I have to wholeheartedly agree. Sabrina is almost a mix of Buffy with a dash of Rory Gilmore peppered in: she is extremely resourceful, intelligent, stylish, witty, and generally a kind person. However, she takes after Buffy with her assumption that she has everything under control and makes hasty decisions with the assumption that she knows what is best for her and those around her, when that is not always the case. Her half-witch/half-mortal status grants Sabrina some special privileges, and she takes liberties with them quite frequently, often causing more harm than help despite her best intentions. Sabrina is thankfully backed with very strong and loving family and friends, who also have special gifts and history themselves. Harvey Kinkle, Sabrina's love interest, comes from a long line of witch hunters while her friend Susie Putnam has recurring visits from the spirit of her dead aunt Dorothea. Sabrina's other bestie, Rosalind Walker, inherits The Cunning. The Cunning allows Ros to get visions that tell hidden truths, as well as show the possible outcomes of situations, which usually end up being pretty fucking spooky.  Her aunts Hilda and Zelda are beautifully executed as heartwarming and terrifying, while Ambrose is the witty, cool older cousin who everyone wants in their family. It's hard to pick a favorite character from the show, but I would have to say that The Weird Sisters, a threesome of orphans who attend the Academy of Unseen Arts alongside Sabrina, are completely captivating in every scene they are in. I do have to give Madam Satan a nod, disguised as Miss Wardwell in an effort to do the Dark Lord's bidding and corrupt Sabrina, as I absolutely adored Michelle Gomez as Missy/The Master in Doctor Who (she plays a hell of a villain, what can I say?).

The juxtaposition between mortals and The Coven in the show are something worth commenting on, and I took mental notes throughout the season. Aside from some of the more obvious factors such as cannibalism, and murder, the topics of polyamory, and bullying are brought to light. The mortals and Sabrina are shown practicing monogamous relationships, while her classmates (and cousin) are shown participating in the beginnings of an orgy. Her aunt Zelda finds herself in an affair with the High Priest of the Academy, who makes a comment wishing that The Coven practice polyamory like in the older days. Nicholas, another classmate at the Academy tells Sabrina of his interest in her and offers to "share her" with Harvey. On the topic of bullying, The Weird Sisters begin to haze Sabrina on the first night of her attendance at the Academy,in a tradition referred to as Harrowing. While Sabrina tries to put an end to it, the High Priest fully encourages it as he believes that The Coven should follow traditions. Meanwhile, Ros creates a women's support group, WICCA, in an attempt to help prevent Susie from being bullied and sexually harassed at school. I love these parallels because it shows the struggles for change in both worlds, providing something The Coven has in common with the mortals they so detest.

I cannot end this post without commenting on the aesthetic of the show, from the classy-yet trendy diner, to the vintage movie theater, right up to the cozy-cool cafe and bookshop, I want to live on this set. The Chilling Adventures of Sabrina is careful to appear almost timeless, with its mix of vintage flair in everything from the music to the wardrobe (again, Weird Sisters, gimme one of those dresses) mixed in with modern issues of today's society. Even the schools are beautiful, the infamous Baphomet is the centerpiece of the Academy, while Baxtar High makes me pine for the eighties and nineties with its earth toned hallways and paper holiday decorations- the library alone is completely swoon-worthy. The show makes me pine for the simple times of my youth without the distractions of technology, you know, as I type away with my face shoved into a laptop. The entire tone of the show is spooky, but in the most charming way. Apple picking, anyone?

With The Chilling Adventures of Sabrina finally under our belts, we have moved onto another Netflix series that premiered late last year: The Haunting of Hill House. We are only one episode in, and despite the change in tone, we are liking it thus far. That being said, what are you creeps currently watching? It seems Jeremy and I are more movie people these days, but finishing this show made us kind of miss watching them. We noticed a trend with most series we watch (Stranger Things, Twin Peaks, for example) are meant to be watched almost as if they are a movie. Each episode blends in with the next one, making for one long story. The Chilling Adventures of Sabrina was like that for the most part, but with the Batibat and Holiday episode, it felt a bit like we got a taste of those monsters-of-the-week we were familiar with in shows like Buffy, Supernatural, or Doctor Who. Which brings me to another question, which style do you prefer? Leave us a comment here, or on any of our social media accounts, because you know we love hearing from you! Don't forget to join our Facebook group, Coven Creeps, to discuss all things spooky nerds enjoy. Until next time, keep it creepy!
Media Massacres