Blood Appetit: Eyeball Pasta With A Side Of Deep Red (1975) 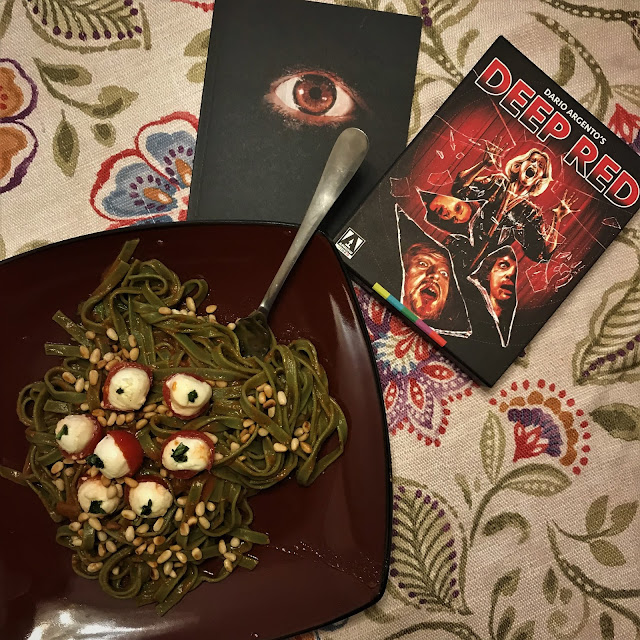 Sara: Dario Agento's Deep Red (1975) has been on my to-watch list for ages, ever since Jeremy picked up this sexy Arrow release. Being a huge fan of Suspirira (1977), and with our choice of Eye Ball Pasta as our Spooky Eat of the month, Jeremy insisted that it was time. My immediate, and spoiler-free thoughts, are that this movie is perfectly gorey in a charming way. Though the colors in this film are not as vivid as in Suspiria, Argento does not shy away from bright red blood in each of the kill scenes. Most of the characters in this movie are so very over-the-top in their performance, but somehow it works to balance out the seriousness of the tone of the film. I will be the first to say that I not one who pays close attention to the score of a movie, but this one is just impossible to forget. A creepy child's record, followed by Goblin's Profondo Rosso is repeated throughout the film. It completely pulls your attention in, as the perfect buildup to the intensity of the scenes that follow. It probably helped that I was a fan of this song before seeing the movie, so having something so vivid to pair it with really perfected my love for it. Though some scenes did drag a little, I thoroughly enjoyed this movie and am now pushing myself to gobble up more Dario Argento this year.

Jeremy: Just as a heads up, there's a bit of spoilers here for Deep Red (1975), so if you want to go ahead and stay in the dark about the plot then skip on over to the end of this article for an excellent pasta recipe! In typical Argento fashion, Deep Red is a prime example of the Italian Giallo genre. This genre, typically rooted in horror or thriller films, incorporates mystery or detective elements and often contains slasher or supernatural horror plot devices. While i'm not well-versed on the genre, I still feel I can confidently state that Deep Red is the perfect film to represent Giallo overall, and a great start for novices to it, like myself. Deep Red follows musician Marcus Daly, who stumbles upon a murder in progress during a walk home from a night of drinking with his friend Carlos. The murder in question is that of a medium named Helga Ulmann who has a vision of a murderer who has "killed and will kill again" in the audience of one of her lectures. Following Marcus arriving to the scene of Helga's death, this triggers a series of events that will lead him to eventually discover the identity of this killer, clad in black leather gloves, with an ominous (and creepy) children's song playing before each of their kills in the film. And with the help of female reporter Gianna Brezzi, Marcus' eventual love interest, he is thrust into a series of false leads, as the killer always seems one step ahead, brutally killing anyone who could help his case. 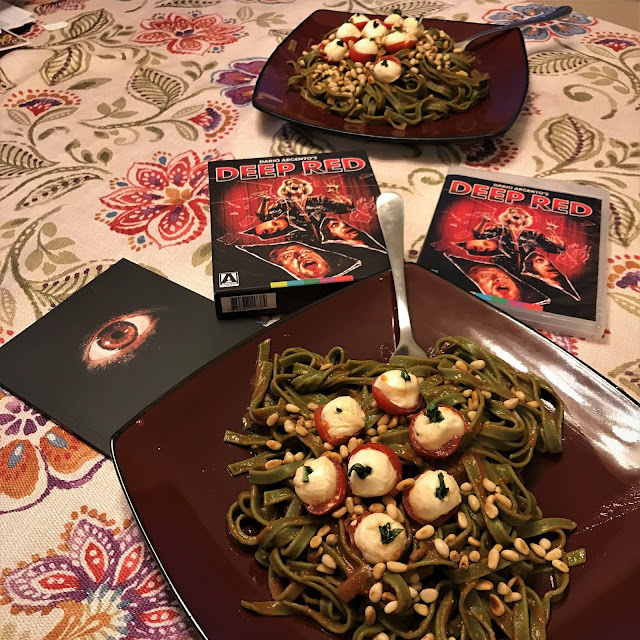 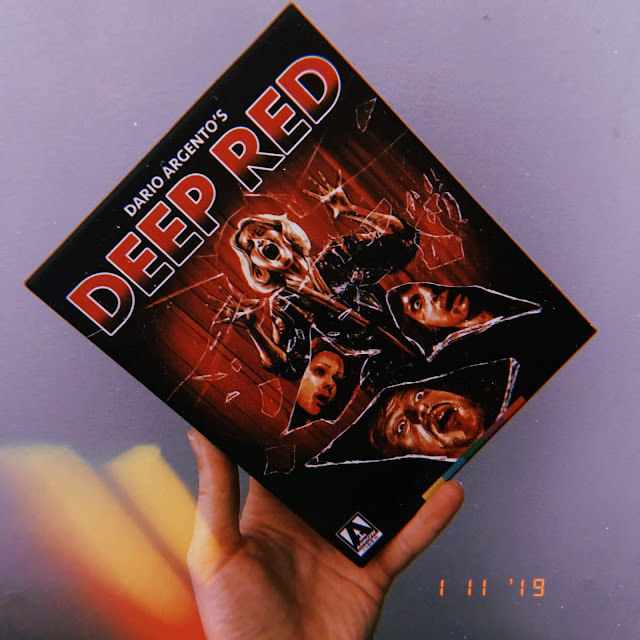 While I still prefer Suspiria as my favorite Argento film, Deep Red is easily in my top three. It's got great kills that have inspired such films as Halloween II (1981) and Scanners (1981), an excellent Goblin score, amazing kills accomplished by fantastic practical effects, and a mystery that I was always invested in and genuinely surprised by its outcome. If I could fault the film, I would say i'm not a huge fan of the characters. Whether it's a translation issue, with our copy of the film constantly flip between the same actors speaking Italian one moment and English another, or a sign of the times, I didn't find anyone to be particularly likable enough to get behind their motivations, outside of the overall plot. Maybe Deep Red could be a perfect film to me, if not for this issue. The story, that is the most intriguing i've seen from Argento yet, is complex and engaging, and aside from a particular moment spent searching an abandoned home for clues, my eyes were glued to the screen even on what must be at least my fifth viewing of the film.

Anyone looking to give Deep Red a look at, I recommend the Arrow Video release pictured above. Because of the US version cutting out over 20 minutes of footage, you're getting the most complete version of the film with this release (clocking in at 126 minutes) with all of the gore and extra plot threads intact. Plus, you can't beat the beautiful packaging that is consistent with every one of their limited releases, with a plethora of extras that you won't find anywhere else. You won't be disappointed.
\ 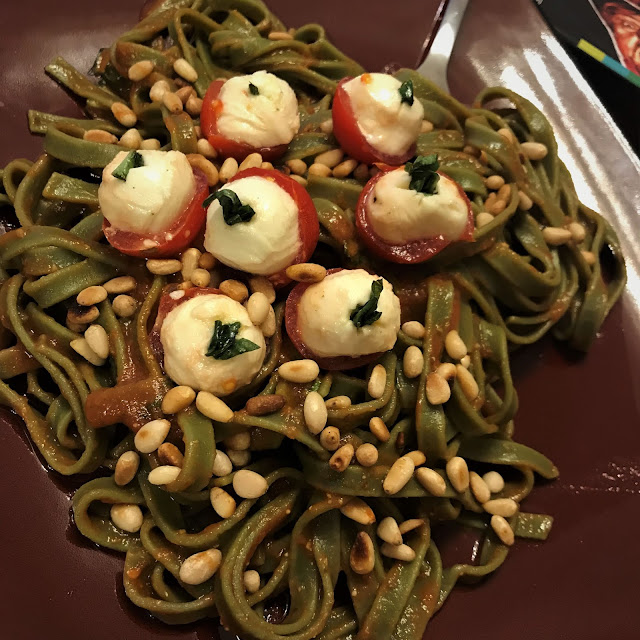 Sara: We decided to pair Deep Red with this delicious Eyeball Pasta via BBC Good Food, however, we tweaked it a little by adding some pine nuts for a bit of protein. Seeing that it takes 25 minutes total, is easy to make, and serves 4-6 children (or, two hungry adults), we were sold.

I started with toasting the pine nuts in a skillet over medium heat, stirring so that they wouldn't burn, for about 3 minutes. Set aside. Cook pasta according to instructions on package, being sure to salt the water. While pasta is cooking, half the cherry tomatoes and cut the seeds out. Half the mozzarella balls, and stuff inside the tomatoes. Cut a small circle or scrunch a bit of basil to center on the mozzarella. When the pasta is done, drain it (I set aside a bit of pasta water to add to the sauce). The recipe calls for you to heat up the sauce separate, but I added the pesto and some chopped fresh basil to the drained noodles, then mixed in the sauce and a tiny splash of the pasta water. Top with eyeballs, and pine nuts and serve! This would probably be pretty good tweaked with a little garlic, but overall a very nice, simple, spooky pasta.

We have a couple more posts for you creeps set for this week, so stay tuned! Let us know your thoughts on Deep Red, and if you like the eye ball pasta, we love, love, love hearing from you. Hit us up on all forms of social media at @FoxyCatCoven. In the meantime, keep it creepy, kids!
Spooky Eats