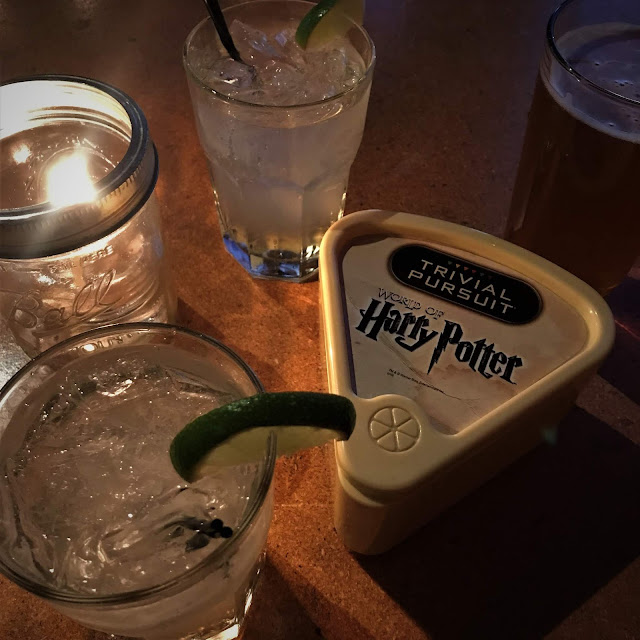 Jeremy: As a companion piece to our review of LEGO Harry Potter on PS4, we thought we'd check out another Harry Potter themed game to recommend to you creeps. While not our first foray into trivia based games for the Coven, this is our first look into an entry from the wildly popular Trivial Pursuit series of games. My own experience with Trivial Pursuit is minimal, with the only other game that i've played in my lifetime being the Disney version from the late 1990's. But looking back on that experience, and not being the biggest fan of the Disney universe, I had a blast with the thing and would frequently beg for family and friends to give it a go for the thousandth time in order to see who really was the biggest trivia badass (or at least, who memorized the answers to every question on every card). Unlike the version we've covering here however, this version of Disney Trivial Pursuit was the complete edition of the game, basically meaning it included a board and character pieces. Instead, what we have here for the Harry Potter edition is the travel version, including only a pack of two sided cards with questions and answers, a dice, and a single card detailing the few rules you need to jump right into the game.

I've found in my adult life, especially with so much interest in getting out of the house, that I prefer a majority of board games to be travel sized for fast/fun entertainment on the go. And for a Harry Potter trivia game I found this especially the case. Ii'll always hold the series close to my heart as, along with the works of Stephen King and motherfuckin' Goosebumps, the reason that I picked up a book and read it from start to finish multiple times. I loved the books, I loved most of the movies (Chamber of Secrets and Half Blood Prince are still a chore to trudge through), and I loved a handful of the video games adapted from the films. But after the release of The Deathly Hollows film came and went, I found that I had exhausted the huge interest I had in knowing all I could about the wizarding world. But with all those years of knowledge, I found that when we checked out Harry Potter Trivial Pursuit over this last weekend, I still retained a huge amount of info from the series I had left behind. And despite this game asking some admittedly difficult questions, for any fan of the series they should have more than enough insight to own nearly every question. 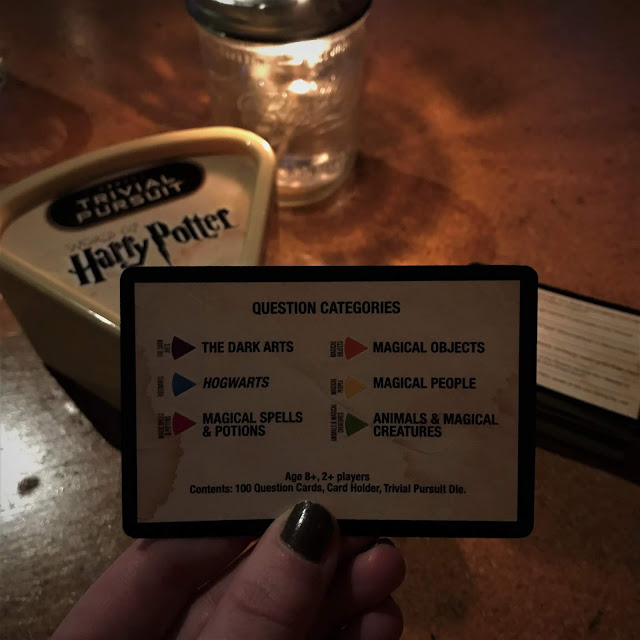 Sara: The Travel Trivial Pursuit: World Of Harry Potter is very simple to play: One player rolls the colored die, and another player will pull a card and ask the question for the color the die landed on. If the player answers the question correctly, then the player will roll again and be asked a second question. If that one is answered correctly, they then get to keep the card. If they answer incorrectly, it then becomes the next player's turn. The first person to collect six cards by answering each set of questions correctly wins the game! That being said, the first person who answers the questions correctly, gets to keep playing until they answer one incorrectly. Which can actually result in the very first person winning if they answer all twelve correctly (Jeremy pretty much did this, turd.) however, you then have the choice of letting the other players continue, or starting a new game. Players even have the option of having a speedier game by eliminating the second question rule, and winning a card by answering the very first question correctly.

There are total of six color-coded categories: Purple; The Dark Arts, Blue; Hogwarts, Red; Magical Spells & Potions, Orange; Magical Objects, Yellow; Magical People, and Green;  Animals & Magical Creatures. The kit also includes 100 question-cards, so there is plenty of options as far as variety goes. The question-cards can also be included in the Trivial Pursuit: World Of Harry Potter Ultimate Edition, getting the users some extra mileage with their cards. As Jeremy mentioned we tend to prefer games with smaller packaging for the moment as we have limited space at our lair, and travel games are very accommodating. With a few months of winter ahead of us yet, we anticipate many game nights with friends and this one is small enough to toss in bag and head out the door with a little cooler full of booze. 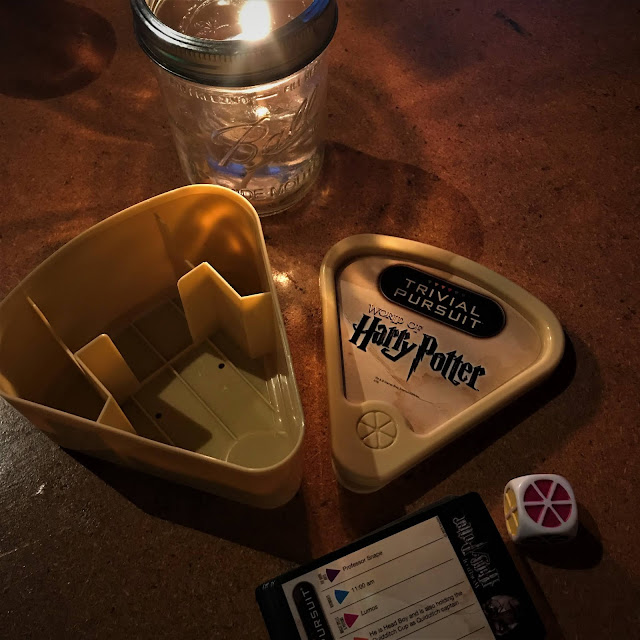 Don't forget to join us THIS Thursday, 12/13/18 at 9:30 EST for our live-tweet of Silent Night Deadly Night: Part 2 (1987) available on YouTube. Follow us on Twitter @FoxyCatCoven and use the hashtag! Until then, keep it creepy, kids!