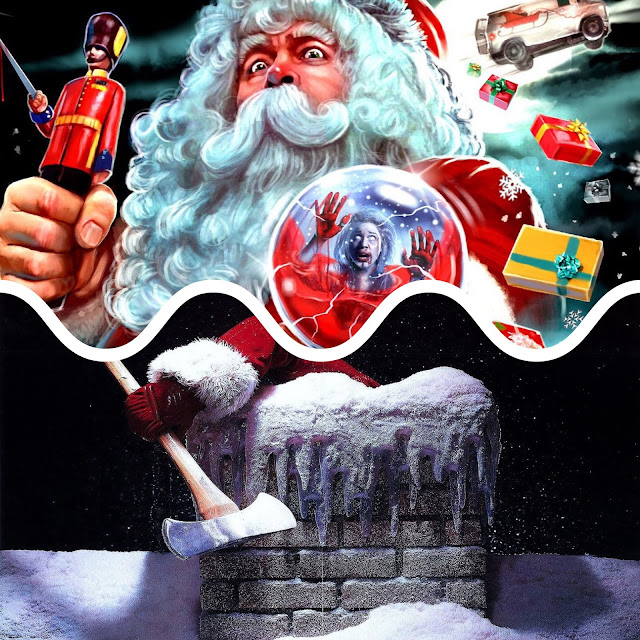 "They thought they could do it without being caught. But when we do something naughty, we are always caught. Then, we are punished. Punishment is absolute, punishment is good." -Mother Superior, Silent Night Deadly Night (1984)

Sara: What's December, you know, the third month of Halloween, without a little holiday slashers mixed in with your usual Elf, and National Lampoon's Christmas Vacation, eh?  We thought we would kick things off this month by talking about two slasher gems from the eighties: Silent Night Deadly Night, and Christmas Evil. One film invoking a horrendous fear of Santa Clause, the other, a deadly obsession.

Silent Night Deadly Night was first introduced to me by Jeremy last holiday season, and I actually really hated it. Upon a second viewing earlier this week, I ended up enjoying it, so maybe I was just being a bit of a Scrooge last Christmas. Silent Night Deadly Night starts off with a family taking a day trip to visit their mentally unstable grandfather, who on first impression seems to be a mute. After the parents are called away for a moment, we find out that the grandfather can speak, and he uses these few moments with his grandson, Billy, to warn him about the dangers of being 'naughty'. Little Billy quickly learns that he has to be good so that Santa will bring him toys, and not punishment.  An unfortunate event on the ride home further enables Billy's newfound fear of Santa Clause, and he spends the rest of his adolescence traumatized over every behavior that might qualify him as "naughty", along  with reoccurring nightmares of Santa Clause.

Fast-forward to adulthood, and Billy finds himself a job at a toy store as a stock person. He is a bit awkward, but otherwise a very friendly and hardworking employee. Come Christmastime, Billy's boss asks him a huge favor: to be the store's Santa Clause. Without giving away any spoilers, trouble quickly ensues and we find ourselves in a holiday horror film that has some pretty unique and wonderfully 80's kill scenes.

You better watch out for: A Linnea Quigley appearance! I don't know why, but she has become one of my favorite small-scale Scream Queens of the eighties. You might know her from her supporting role of Suzanne in Night of the Demons (1988), however I have to say my favorite role of hers is from Return of the Living Dead (1985), solely on the fact that her name is 'Trash'. Second thing to look out for: that epic soundtrack. I think that is the reason why I had loathed this movie the first time around, because every holiday song in it is just awful. I am pretty sure Jeremy said that they had created all of these songs just for the film, so I guess making your own songs so you don't have to pay for the rights of popular ones makes sense, but they are gruesome. Don't worry, I figured out a way to combat this: do a shot each time the word "punish" is spoken! You'll be singing along to words you don't know in no time. 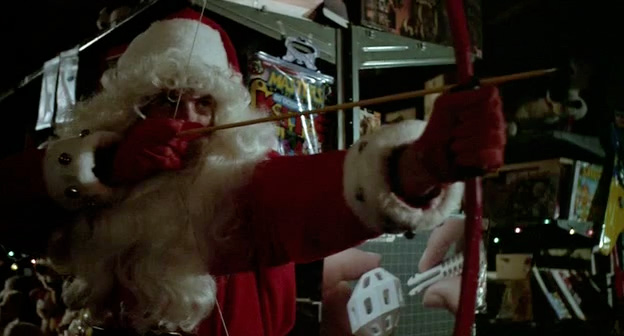 Jeremy: To pair up nicely with Silent Night Deadly Night, we have a lesser known slasher with a Santa known as Christmas Evil (Or Trouble In Toyland if you're into things that sound stupid). Now speaking on Silent Night, I sought that movie out immediately upon hearing about the controversy it caused in its day, to the point of such censorship that a full release of the film didn't arrive to video till just this last year. Which I still find hilarious considering that Silent Night is very tame by not only today's standards, but even 1980's slasher standards. But while parents were getting butthurt by a killer Santa film invading theaters in 1984, they seemed to not give a shit when the cult classic Christmas Evil did the exact same thing four years earlier. Maybe due to this film featuring an even lesser known cast, a lower budget, and not a whole lot of advertising. In the case of my experience with Christmas Evil, I only just now saw this film after a couple years of knowing of its existence.

My thoughts on Christmas Evil can also be found summed up over on my Instagram (@spookyboi31), but for the interest of this blog post let me begin by saying that I found the whole affair, while having shades of some effective comedy and good representation of the holiday, is a mess of a film. John Waters famously declared this film to be "The greatest Christmas movie of all time!", and while I can understand his draw to the absurd behavior of some its characters, the novelty of the film runs out when you realize each segment is separated by long periods of time where nothing important or interesting happens. Basically, it's not consistently crazy enough to warrant getting the praise i've given to such films as Thankskilling or, even more so, Blood Rage. The premise goes that, after witnessing as a child his father (dressed as Santa) groping his mother, Harry Stadling grows up to work at a toy factory, obsessed with Christmas and even has a book of children that he considers to have committed deeds that classify them as naughty or nice. And it only gets stranger from here in a plot that, when it's not boring you with getting from one location to the other, feels like a bizarre dream exposing the darker side of Santa's morality system.

While I may not find myself a huge fan of the film, Christmas Evil is still, like Silent Night Deadly Night, a film about a murderous Santa Claus that is driven by some trauma in his past. When viewed together, these two films make an excellent double feature for those looking for some psychological horror this holiday season. Like Sara mentioned, the best thing about pairing these films is a look at both sides of the killer Santa story, one where someone willingly dons the role as the jolly bastard, and the other where the killer fears what he has become by turning to the side of Santa. For my made-up-on-the-spot-just-now drinking game with Christmas Evil, I suggest (but not really cause you'd die) that anyone take a drink whenever Harry starts to either hum or break out into singing a Christmas song. If there's anything that made me come away smiling from Christmas Evil, it's that this film actually features a ton of real Christmas songs! Not sure if they actually paid for them and people just forgot to sue them, but screw it this soundtrack is the shit and made everything so much more bearable. 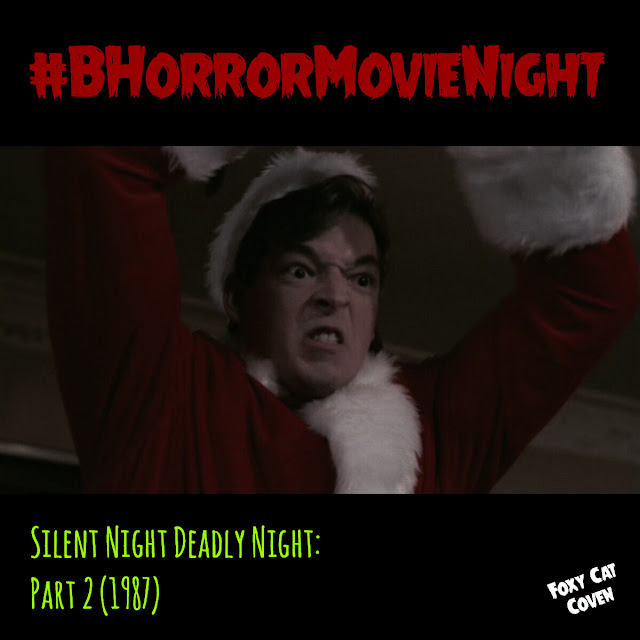 Sara: After you finished marathoning these creepy classics, don't forget to join us next week, 12/13/18 at 9:30 EST for our live-tweet of Silent Night Deadly Night: Part 2 (1987) available on YouTube. Follow us on Twitter @FoxyCatCoven and use the hashtag!

Also, we will be hitting up Krampus Night Detroit this Friday evening, so if you will be in attendance, hit us up! We love meeting fellow creeps. Until then, keep it creepy, kids!
Media Massacres