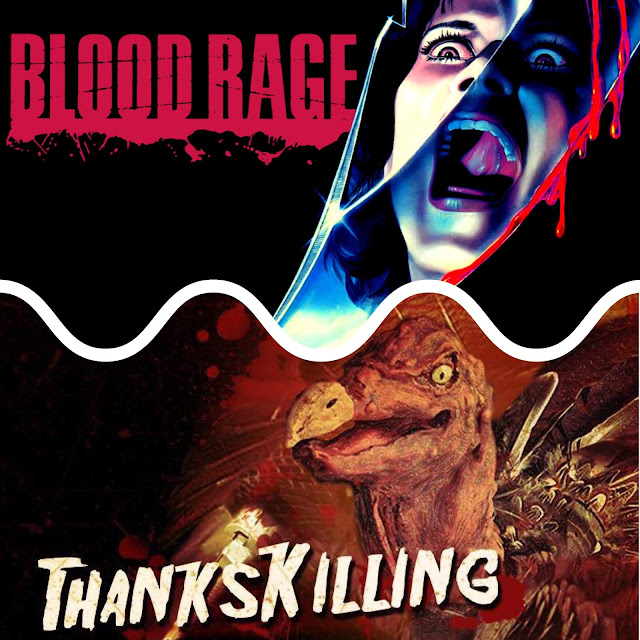 Jeremy: Thanksgiving, as with such holidays as Independence Day or New Years, is not exactly brimming with a huge collection of horror films based off its premise of getting good and stuffed on turkey, mashed taters, and the like. And so, when some poor sap out there decides to take on this time of years claim to fame, their films are often chucked in the bin of other forgotten (and underappreciated) B Horror schlock. I personally can count on one hand the amount of films out there under the title of "Thanksgiving Horror", but fortunately enough for those who have tackled the genre: They've all been fantastic. And for the holiday connection, they are all well paired for any variation of a double feature you could think of. Today we are going to take a look at two of my favorites of the sub genre, two films that would be anything but quality content to the average viewer. But to this amateur horror film observer, 1987's Blood Rage and 2008's Thankskilling are hilarious, classic examples of horror comedy done right. Whether unintentionally (especially in the case of Blood Rage) or not, both films understand the absurdity of a Thanksgiving horror film, and run with the concept.

Blood Rage, also known as Slasher or Nightmare at Shadow Woods for those who like inferior titles, is less about the holiday itself, and focuses more on the antics of twin brothers Todd and Terry, as one of them wrecks some good old slasher mayhem on Thanksgiving night. And just like Thankskilling so proudly does at every turn, Blood Rage is stuffed full of Thanksgiving-related jokes! Recently, Sara and I even created a drinking game (that I absolutely don't recommend attempting) that's pretty simple on the surface: A drink every time someone says "Terry" or "Todd", and a shot whenever the phrase "That's not cranberry sauce" is mentioned. Might not seem like a lot, but watch the film just once and you'll find that's about 80% of the dialogue. 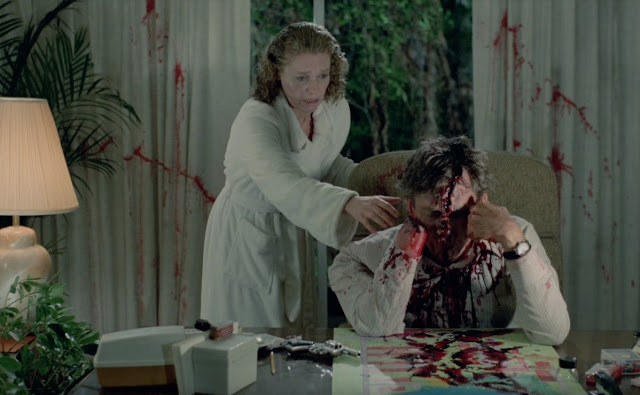 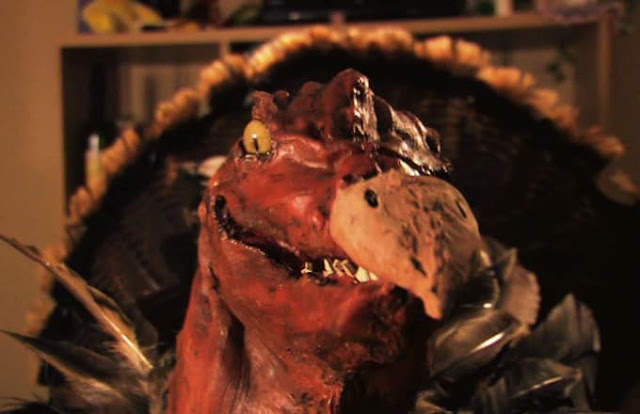 But what makes Blood Rage such a beloved film to me? Aside from the hilarious and creative kills that put many of the popular slashers of the time to shame, it's all about the performances. If anyone deserves an award for a role that rivals in insanity even the most batshit moments of Nicholas Cage's career, it has to go to Louise Lasser's performance of the mother in Blood Rage. Holy. Fucking. Shit. From drunkingly eating Thanksgiving leftovers right out of the fridge, to spending half the film yelling into her phone, Lasser elevates Blood Rage to a drive-in classic for the ages.

Thankskilling is about a killer turkey who also spouts Thanksgiving one-liners while slicing and dicing up teens, what more do you need from a Thanksgiving horror film? I had a tough time with this one as it doesn't follow our "Creepy Twins" theme of this month, but cmon, this is the perfect pairing to Blood Rage. I saw Thankskilling for the first time about five years ago, with some hesitation I admit, when a friend finally convinced me that my time wouldn't be wasted here. Where as Blood Rage featured some fantastic, if ridiculous, special effects, Thankskilling doesn't give a shit. On a budget that barely passes the $3000 mark, I have to wonder if all of the actors were paid in monopoly money. And yet, despite not being on par with the gore of Blood Rage, this film fucking rocks. If only for the fact I found it to actually be hilarious, with far more iconic lines, lead up to plenty of bloody, nasty kills from our resident turkey named.... Turkey. Gobble gobble, motherfucker.

We're a little over halfway through November, so stay tuned for more spooky twins and other terrifying features. With the snow finally pilling up here, Thanksgiving just around the corner, and the holiday season all around us, we're keeping the Halloween spirit going here at the Coven. And so, as always, keep it creepy.
Media Massacres Sinister Pairings