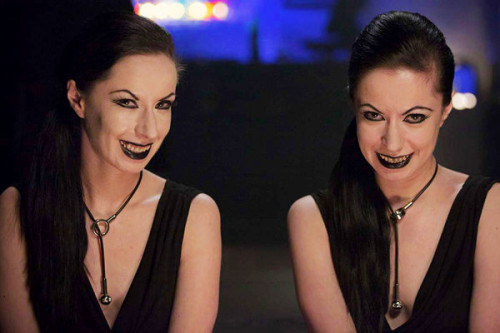 Sara: When it comes to the holidays, there are always a few choice movies that we try to sneak in to celebrate. As far as Turkey Day goes, we had to put Blood Rage (1987) down, hence why it is our #BHorrorMovieNight live-tweet this month. Blood Rage is a slasher film centering around twin brothers, thus spiraling into the idea of us dedicating this month's theme to spooky twins! Aside from our live-tweet, and a weekly recommendations of horror movies involving twins, we decided to dedicate our first post along this theme to our favorite twins in horror. I chose to select the Berlin Demon Twins from the film American Mary (2012).

If you are not familiar with this movie, American Mary stars Katherine Isabelle as a struggling medical student who gets drawn into the world of underground surgeries  to "freakish" clients with the allure of easy money. One set of these said clients are the nameless German twins, who are very obsessed with body modifications, and each other. They start out with a simple request of Mary, to have horns installed into their heads, but to also have the left arm of each sister removed, and then reattached to the other. That way they can always be together, no matter how far apart in the world they might be. Pretty god damn creepy, if you ask me. To add another spooky factor; the twins in this movie are Jen and Sylvia Soska, who wrote and directed the film, and were inspired by the likes of Clive Barker and his own film of pain for pleasure, Hellraiser.

What makes these two take the crown over other creepy twins such as the Grady daughters in The Shining, or George Stark in Stephen King's The Dark Half? They are subtle. They do not have actual names in the film, they are only referred to as The Demon Twins of Berlin on their website. They are also very delicate in their movements, and dress completely identical in each scene, making them execute an almost innocent disposition. It's the body modification of  trading their limbs that pushes it into a dark place that is obviously disturbing, but so very quietly. 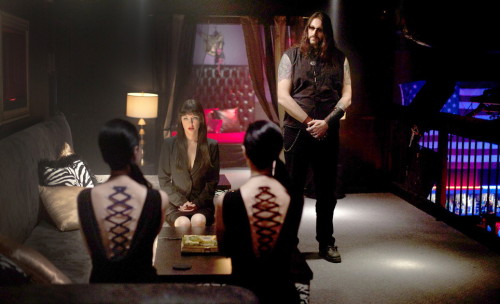 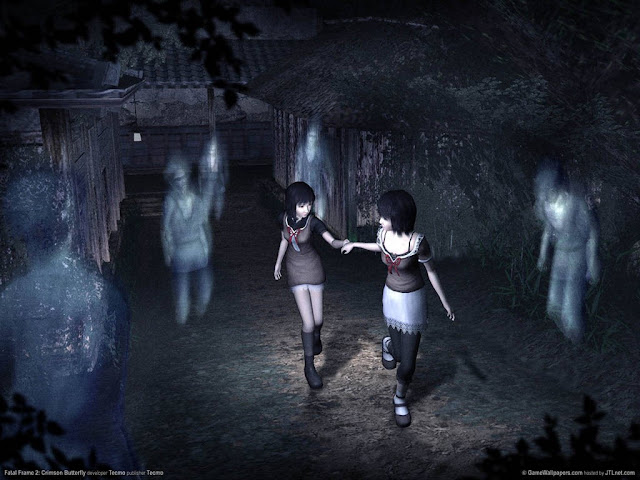 Jeremy: I decided to do something a little new for the blog with my choice, and go with not only a video game, but also one from a console that no one plays anymore, the PS2! If you're like me and did all your growing up in the late 90's/Early 2000's, this was the system you were likely introduced to games with more serious themes, upgrading from saving princesses in castles to bloody, ancient sacrifices in haunted villages. The game i'm referring to for the purposes of this post, is the survival horror classic: Fatal Frame II: Crimson Butterfly. While i've always been drawn to the genre of survival horror, I paid particular attention to the Fatal Frame series during it's original run, spurned even further by countless news sources placing it in the same class as such games as Silent Hill, mostly in terms of how terrifying this sequel was for the time. Fatal Frame II employs a system of gameplay in which your only weapon against an abandoned village full of malevolent spirits, is a camera. Entering into first person mode whenever in use, what is known as the "Camera Obscura" captures images of these deadly spooks, dealing damage and eventually capturing them within. A very up close and personal look at the terror on display here.

But what's the story like? Where's the twins in all this? Fatal Frame II follows Mio Amakura and her twin sister Mayu returning to a childhood play area of theirs near Minakami Village, where little do they know, an urban legend of a "Crimson Sacrifice Ritual"'s failure caused the village to vanish, trapping anyone already inside, and any outsiders who approach it from the nearby forest. The Crimson Sacrifice Ritual, the primary focus of the game, deals with the idea that each decade an elder twin from the village must strangle to death their younger sibling as a sacrifice to a "Hellish Abyss" located deep within the underground tunnels of the area. With the failure of this ritual, the town is stuck in limbo, with vengeful spirits out to complete the ritual through Mio and Mayu for their own various ends. 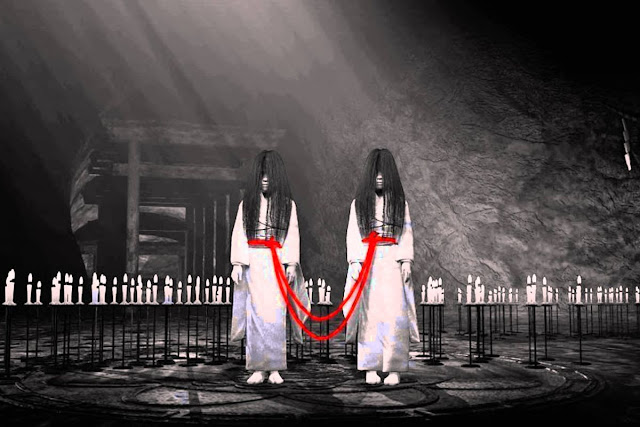 I won't go into too much more than that, but if you're lucky enough to come by this game, absolutely give it a shot. While the visuals may be dated to 2018 eyes, the story, the characters, and the capacity to terrify are timeless. Look no further for not only a tale of one set of creepy twins, but several more! Even to this day, it's still considered one of, if not the scariest game of all time and it rightfully deserves that honor.

Sara: Have a favorite creepy twin movie, game, or novel? Drop us a comment! We love hearing from you creeps, especially your recommendations, so feel free to reach out at us on Instagram, Twitter, or Facebook! Until next time, keep it creepy, kids!
Media Massacres