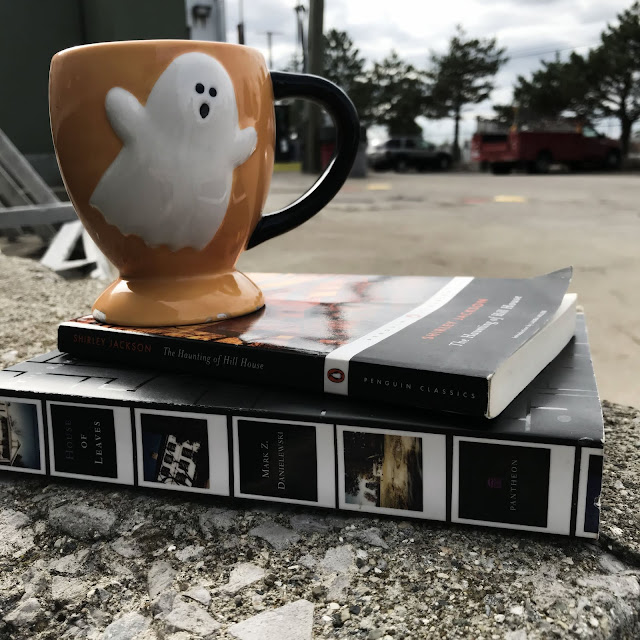 Jeremy: Like anyone born in that most righteous time period of the late 80's to early 90's, I grew up on such spooky literary classics as Goosebumps, Scary Stories To Tell In The Dark, and....well that's about all anyone seems to remember. So when I finally upgraded my education to more adult-themed works, it wasn't long before I found myself face to page with the book that inspired that shitty late 90's adaption known as The Haunting, "The Haunting of Hill House". Before Dracula, or Frankenstein, or any of the other old timey novels that were deemed important enough to cover in school, I wandered the halls of Hill House as much of a horror novice as I could possibly be. And now, so many years later, I still continue to return to this jolting tale of terror time and time again. Although it has been arguably bested in the years after its release, The Haunting of Hill House still remains my favorite haunted house story, and one of the greatest horror novels of all time.

While the 1999 film adaption of Jackson's Hill House retains the core elements of the novel, it takes more than a few liberties in crafting a more modern, fast paced, and less subtle story. While years prior, the 1963 film adaption stuck more closely to the tone of it's source material. With a focus on the deteriorating psychology of the leading characters (primarily protagonist Eleanor), both the 1963 film and original novel are not completely up front on whether or not Hill House is indeed haunted. In fact, it could be argued that not a single thing supernatural happens here, but instead, whatever misfortune comes to those who arrive at this house they bring with themselves.

Eleanor is a damaged character before she even arrives to Hill House. Her implied death would seem by the other characters to be influenced by the spirits lurking among them. But with the prospect of having to return to her mundane, "normal" life, Eleanor may realize that the conditions of her existence, one which finally seemed to have some significance at Hill House, will only continue to worsen by returning home. Don't get me wrong, I love concrete supernatural stories. But a real master of the craft has the ability to create a novel that could just as much be fictional as based in reality. I can respect whenever I come across this method; at least, when it's done well that is.

The location of Hill House, with its history of violent death and suicide, works as the perfect center for Dr. Montague's experiment. By bringing together Eleanor and Theodora, both woman who have experienced supposed paranormal incidents in their past, and subjecting them to outlandish tales of murder, it makes sense that under this influence they would believe that anything out of the ordinary could be misconstrued as a haunting. While I don't believe it's his intention to illicit this sort of manufactured response from them, it does provide further evidence that the strange goings on here could, in fact, be all in their heads. Would I prefer what they are experiencing is supernatural? I think that, just as I would prefer to be able concretely say that such things as ghosts are real, I would like to believe that the spirit world really did have a hand in the events of The Haunting of Hill House. This great mystery, combined with just an excellent story driven by complex characters, is why this novel has endured all this time. And for that reason, I'll continue to return to Hill House (and its many imitators) for the rest of my life, hoping to maybe one day solve that mystery of the unknown for myself. 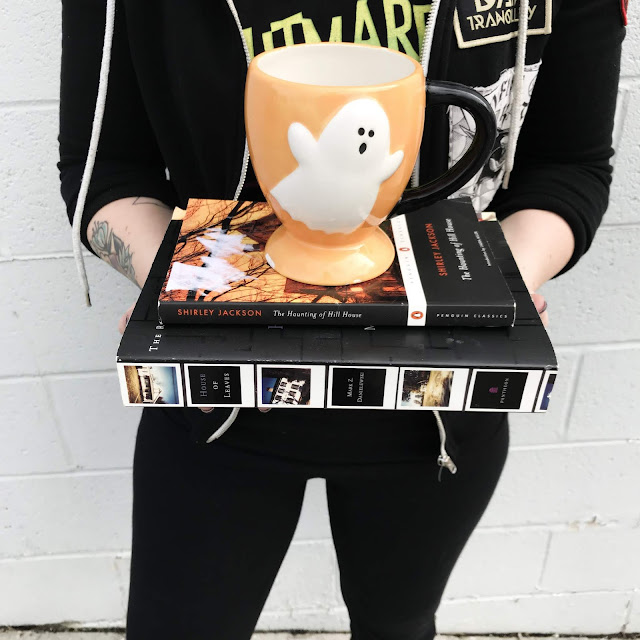 Sara: When we decided on our theme of haunted houses for this month, I immediately knew that I wanted to talk about the book that took me nearly seven months to finish: House of Leaves, by Mark Z. Danielewski. The 700+ pages wasn't the culprit, hell, I had finished Stephen King's IT in a quarter of the time it took me to get through House. To be fair, I mostly only had time to read on my lunch breaks at work, and a few stolen moments on longer car rides, but in the end I preferred reading this book at a slow pace because it gave me time to process each passage I carefully pawed through.

House of Leaves focuses on a young family, Pulitzer Prize winner Will Navidson, his partner, Karen Green and their two children, who move into a home on Ash Tree Lane where they discover that something eerily wrong: their house is bigger on the inside than the outside. Although it sounds kinda like they are living in a TARDIS, this home does not take the family on amazing adventures throughout space and time. Instead, the house begins to shift, and change; adding doors and hallways that were not there before. Hallways that are initially pretty small, but eventually grow longer, leading into cavernous rooms, deep within the small house, that are seemingly never-ending. A team made up of Navidson's brother, and a few experts is formed, and a documentary on the exploration of the house takes place throughout the novel. This occurrence is all relayed to the reader through a self-proclaimed (and very noted) unreliable narrator: Johnny Truant. Johnny is piecing the documentary together through scraps of papers, stained notes, photographs, etc. all found in a trunk he has hauled into his apartment. The reader follows the terrifying accounts of Will Navidson and company's journey through the house, a journey that is compromised with a stairway and rooms that continue on over and over again, as well as a threatening growl that haunts their every move, driving members of the team insane. This is mixed in with Johnny's own terrors of his deteriorating reality as he struggles with holding down a job, battling drug addiction, alcoholism, infatuation with a stripper, and his own haunting past. All the while becoming completely obsessed with finishing piecing  together the documentary.

The chapters describing the team's treks through the house are completely terrifying to me, and I think this book triggered a slight case of agoraphobia in myself. The thought of being in that place, with its vast unknowns and that horrible sound set me on edge. There is also the anxiety I had trying to figure out which order to read the footnotes, as there are so many of them, most of them having their own footnotes as well. The further into the book the reader gets, the harder it is to follow. Making a great parallel for the constant distorted reality narrator Johnny is suffering from, giving the reader a taste of that very bitter medicine. There are parts of the novel that lag, and it was extremely difficult not to stop and look up certain references, as some were truthful, and some were created for the sake of the book. Again, forcing the reader to question reality, much like Johnny, and eventually, Will Navidson, Karen Green, and the others. This book is definitely one to visit again over time, because there is obvious room to pick up missed significant details. Although it was frustrating at times, this was hands-down one of the scariest books I have read in awhile.

There are several videos out there with their own depiction of the hallway that started it all in that house on Ash Tree Lane, but I liked this one.

Tomorrow night is this month's #BHorrorMovieNight live-tweet of House on Haunted Hill (1999). It's available to rent on Amazon if you don't already have it, so you can watch along with us starting at 9:30 EST. All you have to do is follow us on Twitter and use the hashtag! See ya then, Creeps!
Media Massacres