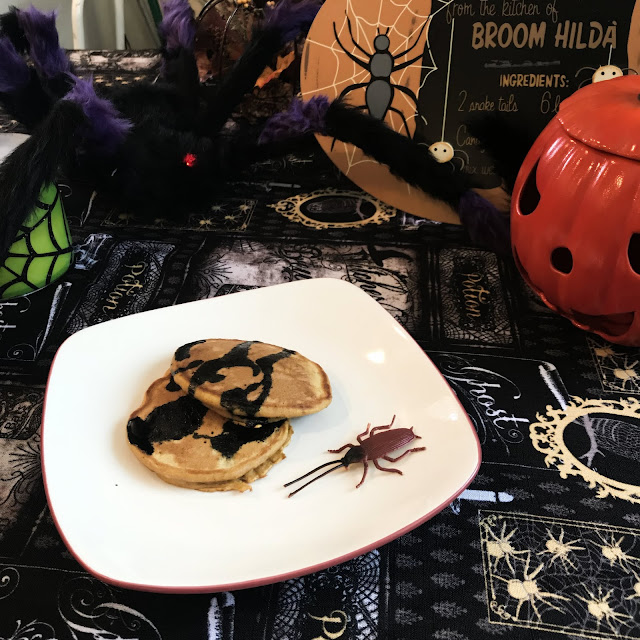 Sara: Every Halloween there are always some favorite traditions to visit: hitting cider mills, attending a haunted house (or four), watching some classic Halloween movies, and doing our part to consume a fair amount of pumpkin spice flavored baked goods. This post is dedicated to two of those traditions: our thoughts on the kid's classic Monster House (2006), and pumpkin pancakes!

During October there are some must-see movies on our list: Whatever current horror movie is in theaters, Halloween parts I and II, The Crow, Trick or Treat, etc. However, the season is never complete without a few kid's movies such as Hocus Pocus, Casper, The Nightmare Before Christmas, and usually, The Great Pumpkin. Back in 2006, another kid's movie weaseled its way onto my list of kid's favorites: Monster House. Three young teens discover that their neighbor's house is a living, breathing, scary monster. Simple enough, correct? It's cute, it's funny, it also hits you in the feels with its heartwarming coming-of-age theme, and the house is pretty god damn spooky. I had the pleasure of showing this flick to Jeremy for the first time earlier this month, and he is going to give you creeps his spoiler-free thoughts on the movie.

But first, we have the perfect breakfast food to pair this October weekend morning classic with: Pumpkin Pankcakes!

In a medium bowl, mix together the flour, baking soda, cinnamon, all spice, ginger and salt. Set aside.
In a large bowl, whisk together the pumpkin and butter. Next mix in the milk, eggs, then maple syrup. Add flour mixture and whisk until smooth. If it seems thick, add a tablespoon or two of water.

Heat a griddle over medium heat and coat with vegetable oil. Drop about 1/4 cup batter at a time, cooking until puffy and bubbling on the top, and golden and crisp on the bottom. Flip and cook until the bottom is golden (about 2 minutes per side). Serve immediately with maple syrup. Bonus: add black food coloring to your maple syrup because it looks cool. 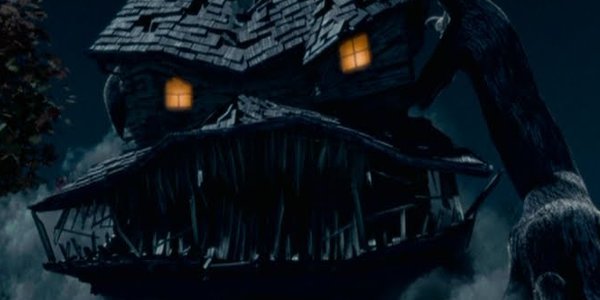 Jeremy: As Sara mentioned, first time seeing Monster House, and truth be told, it took a little pushing to get me to watch it. I distinctly remember this film coming out and, unfortunately, I was at the age where I completely disregarded nearly any animated films. Spooky, killer houses included. This came out a couple years after Polar Express, updating the 3D computer-animated style of that film (thank fuck, Polar Express was unintentionally terrifying) to something that's still a little jarring to look at initially, but you get used to it. The titular house ends up being the main visual attraction here, as it should be. And although there's far less representation of the Halloween season on screen than I would have liked, it's that house and the characters of this world that make this film shine past your usual family film fodder.

Monster House tells a surprisingly heartfelt story that you expect more from a Pixar film, but it works here and it works well. Add in the fact there are some truly funny moments mixed in with great tension that could get your heart racing, no matter what your age. Personally, I disliked some of the ending bits of the film for dragging out a little long, but this is a small complaint for a movie that consistently moves along at a brisk pace. Most importantly, Monster Houses biggest accomplishment to me is its transcendence of its animated format. The performances matched up so well to the characters I nearly forgot what I was watching is a cartoon. Something I struggle with though, is the concept that this is a seasonal, Halloween film. A great animated film, sure. But despite taking place on Halloween during the final moments of the film, I couldn't get behind it being a Halloween tradition in the vein of something like Trick R Treat. I'll return to Monster House again in time, maybe my opinion will change. But shit man, that list of films is sacred, can't just put anything on it!

Sara: We are off to our last weekend at the Michigan Renaissance Festival, sadness, however, there is still one more weekend left after this if you haven't been able to make it out and you live in the area. We will be sharing some more of our shenanigans to our stories on our Instagram account, so be sure to follow @FoxyCatCoven so you don't miss any of our drunken debauchery.  Until next time, keep it creepy, kids!
Spooky Eats