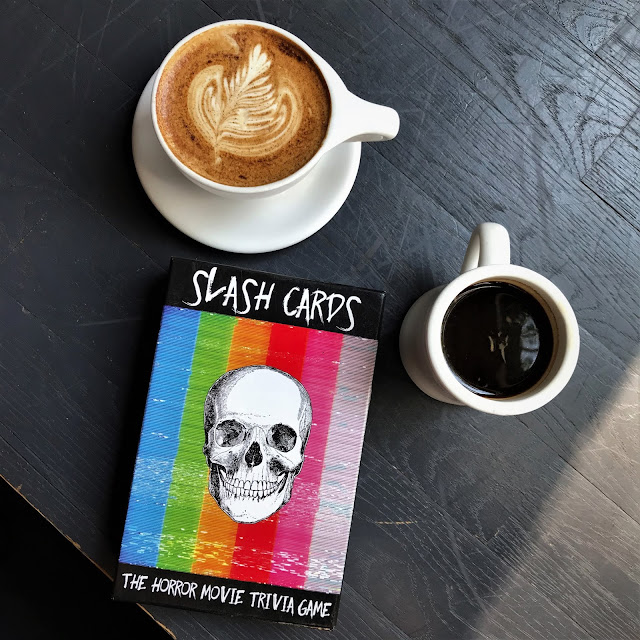 Jeremy: I grew up with trivia games of all sorts. From the early days of Trivial Pursuit, to the jump to digital with the Scene-It series, i've been big into testing my horrible memory against friends and family. But until I was gifted the trivia card game, Slash Cards, i'd never played any game of memory in the horror genre. There may have been a whole lot of horror trivia games that existed before Slash Cards, but this was my introduction. Over the past several years, i've taken to countless online quizzes to test myself (I swear I have a life). And what I would often find is that they all consisted of the same ten to twenty questions, based off the same ten to twenty films. Slash Cards mixes things up in a big way, using a Trivial Pursuit format of categories for each question, it presents trivia that ranges from novice level to fucking "you're probably a serial killer if you somehow know the answer to this" territory. I've on and off played Slash Cards for nearly the entirety of 2018 and i've finished a game only a handful of times. That's where the "Slash Card" comes into play. One that, when drawn, causes you to discard your entire collection of cards gained from answering a question correctly. This keeps what could have been a short game going for hours on end.

What you see is what you get here. Two sets of cards, and two game modes to play them with. One mode in which you collect cards, another in which you attempt to not lose cards. Admittedly, the $35 price tag is a bit much considering you can now purchase Trivial Pursuits own "Horror Movie Edition" for ten dollars less, where you're basically getting the same thing but in a more attractive package. On the flip side, Slash Cards was released by an indie company through Kickstarter. And so, being made by fellow horror fans, you're getting content (in the form of what trivia is asked) that comes from people who understand the community, as opposed to a mass market option that consists of the same 100 questions, such as, "Who plays the killer in the original Friday the 13th?". This is why I recommend you buy Slash Cards, or even some other card game of its kind! Not just for the quality of questions, but with so many excellent creators out there who are getting the shaft from companies who are out of touch with what genre fans want, it's essential indie developers are shown support by us horror fans. Even if Slash Cards isn't exactly what you're looking for, maybe you want something deeper and with more frills, go out there and keep an eye out for Kickstarters who can make that a reality. Because I guarantee someone out there wants the same thing as you. 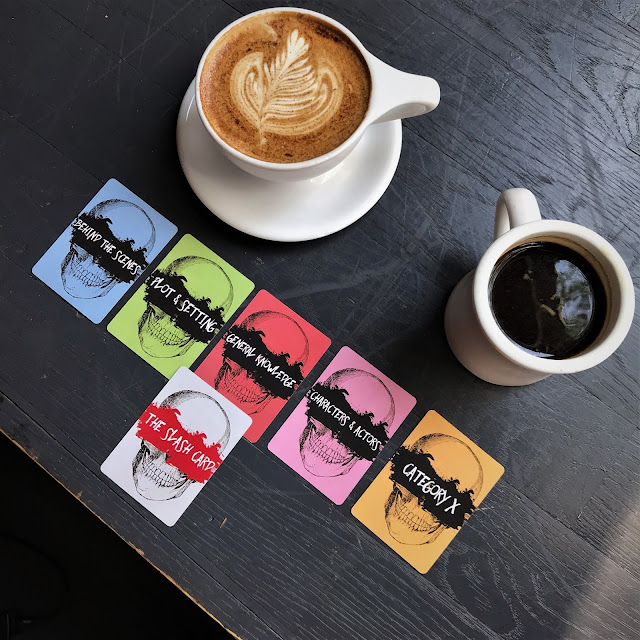 Sara: I too have always been a fan of games, however, most card games I am familiar with are Cards Against Humanity, Uno, and my yearly re-learning of Magic: The Gathering. Being a horror enthusiast (i.e. I get excited, but I sure as hell am no expert on the subject), I love learning little tid-bits about both new films, and the classics, so this game is perfect for that. I am the absolute worst at retaining this knowledge, so it's like a new game for me every time! I also have never been one to keep actors and actresses straight, but luckily this game goes beyond the typical names and dates questions. Some of my favorite cards are the ones you pull that ask you to simply name a certain amount of horror movies filed under a genre or a theme. For instance, you might get a question like: Name 4 horror movies that take place in the winter. Which usually leads to the person being asked to brain-fart, and everyone else to get excited because they all know the answers. I also tend to come across movies I have never seen or heard of, so it just adds more to my never-ending watch list. No complaints here. At the end of the day, this game is perfect for horror fans of all types.

We are still having adventures in Tempe, AZ and the surrounding area, but we are also keeping your social media spooky!  Follow our adventures on our Instagram story @FoxyCatCoven and don't forget to join our Coven Creeps group, located right on our Facebook page. Until next time, keep it creepy, kids. 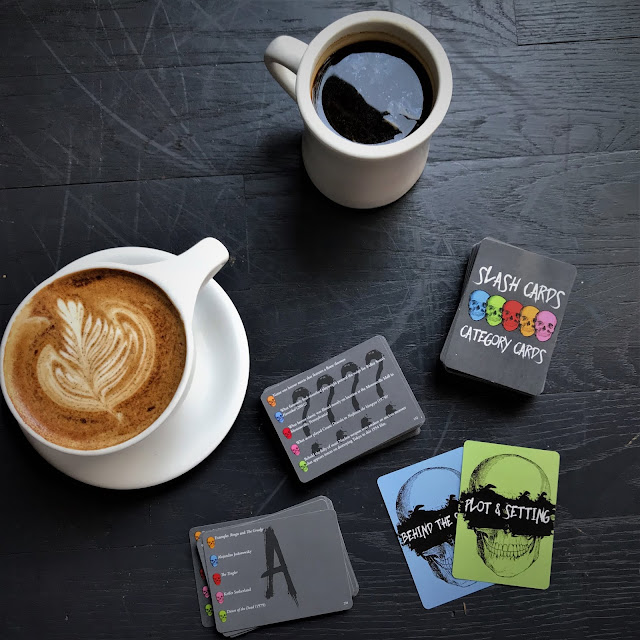