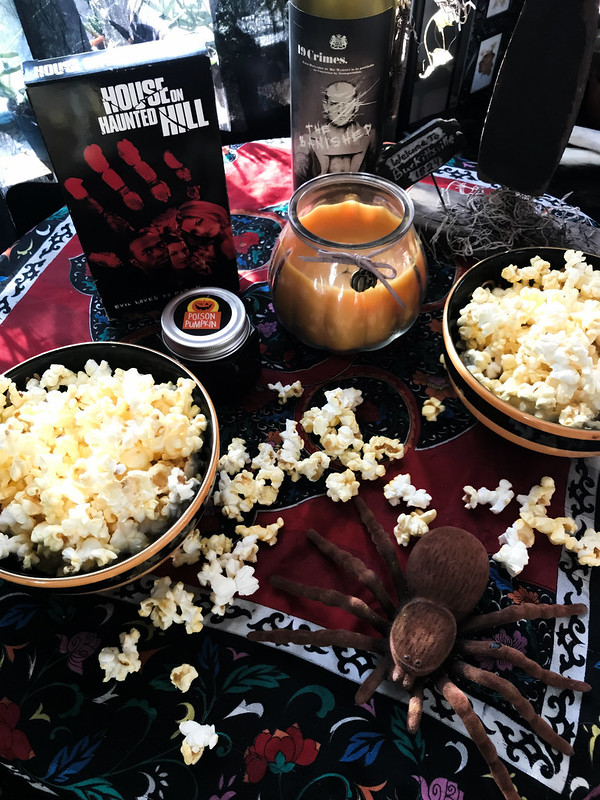 Sara: We had several ideas kicking around for our Haunted House pick for our #BHorrorMovieNight live-tweet for this month, and we had to go with the remake of House on Haunted Hill (1999). If anyone knows me, they know that my favorite time period for horror is the 90's to early 2,000's (arguably the absolute worst time period), so of course I was stoked for this one. We had actually just watched this film a few week's prior, but couldn't resist a re-visit. I had forgotten the majority of the cast for the movie, forgotten how awesome the house actually is, and all of the terrible late-nineties clothing. I absolutely adore all of it.

House on Haunted Hill follows a group of strangers who are invited to a party at an abandoned asylum, where they are each offered $1 million by an amusement park mogul if they are able to survive the night. This is a remake of the original 1959 film starting Vincent Price, with an updated twist: instead of a spooky house rented out by an eccentric millionaire, the guests in the remake are invited to abandoned haunted asylum, and not only have to survive the night, they have to make it out alive. The kills in this movie are pretty decent, however they kind of take forever to get to. There are plenty of spooky scenes before then though, and my favorite has to be the saturation chamber sequence, which added a bit of trippiness to the film. It worked perfectly for creating a distorted reality for the viewer, which is something the characters are constantly struggling with throughout the film. Blessed with Marilyn Manson's cover of Sweet Dreams, this movie is solid 90's gold.

Jeremy: While being subjected to the 1999 remake of The Haunting on countless occasions, and having seen (and loved) the original 1959 House on Haunted Hill, I somehow managed to completely skip over seeing House on Haunted Hill (1999) until only recently. To be fair though, it was part in reputation, a general public distaste that sought to let 1999's House on Haunted Hill die with time just as it's contemporaries (The Haunting, Thirteen Ghosts, Ghost Ship). But with a renewed interest in checking out several of the films I steered clear of during my early teenage years, I can appreciate that although our b horror movie night choice this month is a haphazard mess, I still find it to be one of the most entertaining horror films to come out of the late 90's.

Geoffrey Rush does a considerable job in pulling off his best Vincent Price, up against Famke Janssen's Evelyn Price, in a dual performance that captures the spirit of the original film. Their snarky back and forths, along with the harrowing opening scene at the amusement park, are some of my favorite bits when I wasn't being bogged down by so much CGI. Like Sara, I also loved the saturation scene that hardcore dated this movie with it's seizure inducing ghosts and excellent doses of surgical mutilation. I'd recommend coming into this film, and even the original as well, with a mindset that you're not here for deep, quality cinema. This is cheesy, it's spooky, it's played for laughs, and in the case of this remake, it's a haunted house amusement park ride on speed. 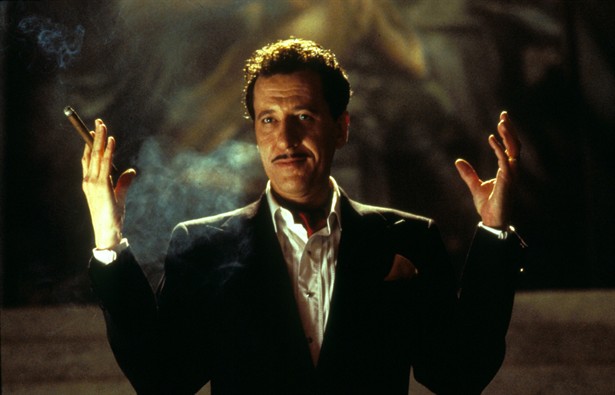 Sara: Today we hit up Hearsefest in Hell, MI and will have a post covering our awesome time there, but you can catch a peak of what's to come on our Instagram story in the meantime. We also have a post coming up about a haunted house here in Detroit,  so stay tuned! As always, keep it creepy, kids!
B. Horror Movie Night