Ranking The Jaws Franchise From Worst To Best 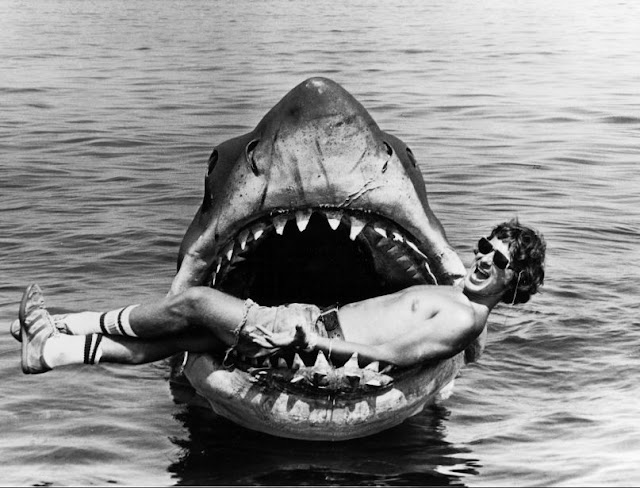 "Warning: Spoilers for the entire Jaws franchise lie ahead"


Jeremy: Here we are! At long last at the end of August's shark-filled debauchery with the king of all shark franchises: Jaws! Compared to series like Friday the 13th or Halloween, Jaws has lived a short existence for a horror movie franchise with only four films to it's name, spanning from the 70's to late 80's. And yet, despite having such little coverage, it is the series of shark films that all other shark films would be judged by to this day. While we intentionally didn't mention any of these entry's in our previous posts, every film we've covered or recommended owes something to Jaws. From that signature theme, to the ridiculous ideas presented in the latter half of the series, it's fin print can be found everywhere. And so, without further ado, let's jump in to how we here at the Coven rank the misadventures of cinemas most famous aquatic beast. 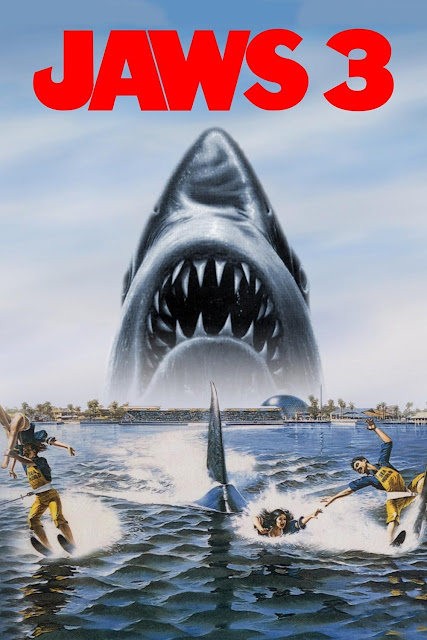 Sara: It's Jaws! In 3D! I will be blunt up front: This movie was terrible. I hadn't seen it until this month, and we even had the pleasure of renting all of these films from the video store one city over. I think my enthusiasm ended before we left the parking lot with this one, I knew, I KNEW that the 3D graphics were going to be terrible. I am not overly fond of 3D movies to begin with, but this. This monstrosity. Shitty graphics aside, I figured having a young Dennis Quaid, and the woman from Back to the Future, and the setting being in Sea World, it would be okay otherwise. Hard nope. This plot was so lackluster, we actually fell asleep and had to finish it in a second sitting. Unlike the characters in the first two films, I felt like the ones in Jaws 3 had no depth. The kills were uneventful, and I felt there was no real build-up like there had bee in the first two. There were some really adorable dolphins though, so there was that.

Jeremy: This film ends with a freeze frame, "Yeah!" complete with our heroes throwing their arms in the air, flipping dolphins among them, in the joyful hope that this fucking movie can finally be over now. With awful 3D effects, an entire cast that's forgettable (yeah, aside from the lead brothers, I can't recall enough details to describe any other characters), and the weakest kills/suspense of the series by far, Jaws 3D is a gimmicky film that does not live up to its gimmick. While the sea world theme is an interesting take on the formula, albeit TV movie worthy, it really only sets up what feels like hours of pointless exposition. If there's a highlight to be had in this film, it would be the sequence within the underwater tunnels, in which a whole mess of tourists face our worst fear with those damn things. Anyway, the film ain't fucking good mate, skip it. 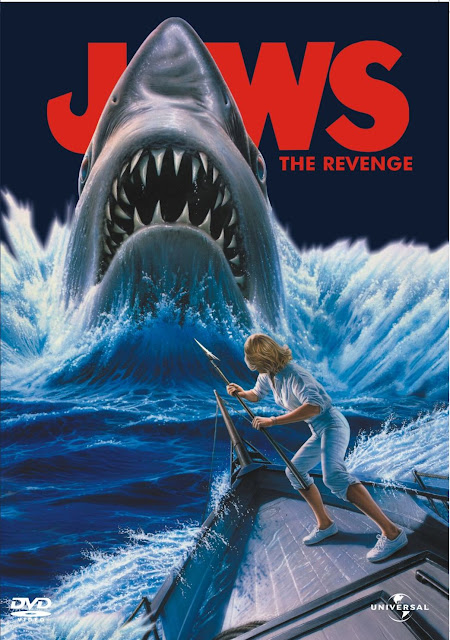 Sara: IT'S CHRISTMAS JAWS.  Again, I hadn't seen this film until this month, and after watching the atrocity of Jaws 3, I didn't expect much of this one at all. The opening scene was a bit cheesy, but with the inclusion of some old cast members from the first two films, and mother-fucking Micheal Cane, I was hooked. This one has probably the least amount of kills, and the least amount of screen time for the shark, but it was better orchestrated as far as the plot went (far-fetched as it was), resulting in a less intense, but still a fun horror film. Featuring the return of the mother from the original film, this one also gets points for attempting to create some kind of continuity with the rest of the series.

Jeremy: Didn't think this would be here, did you? With a 0% score on Rotten Tomatoes, I guess the world just wasn't ready for a shark that travels from Massachusetts to the Bahamas in less than three days. Because this movie is harmless, just a decent shark movie that makes no fucking sense, and to this writer, it still doesn't suffer for it. No, it's no where near the quality of the other two films we have yet to touch on. But it's miles ahead of Jaws 3D, a film I would never revisit again. But The Revenge? I gotta agree with Sara, Michael Cane is awesome as always, it has the second best opening sequence of the series after the original, and at the end of the day, at least it kept me awake. Give this one another shot next Christmas, you might regret it, or maybe, just maybe, you'll find a new appreciation for a movie that was degraded to oblivion far too soon. 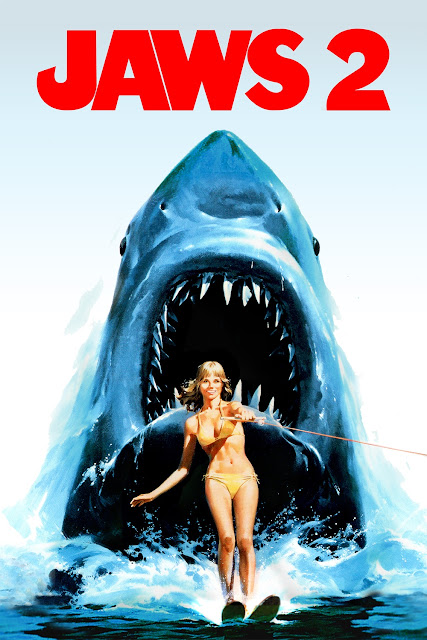 
Jeremy: In a huge jump in quality from The Revenge, we have Jaws 2. I wanted to rank this as the best of the Jaws films, and maybe it was due to the originality card the first can play that I didn't. Roy Schneider may have not wanted to return for this sequel, and yet he still turns in an excellent performance. In fact, nearly the entire cast does. With so much care into replicating the suspense of the original, with a greater focus on children in peril as opposed to the primarily adult-themed original, Jaws 2 orchestrates scenes that are just as memorable and very tense. Check the extended scenes featuring the films lead teens attempting to reach safety among the wreckage of their sail boats, all the while facing several harrowing vignettes of well-executed shark terror, for some fantastic scares. It's a shame that it has been so eclipsed over time, this is truly the most underappreciated shark movie of all time.

Sara: At first I was a little hesitant on this one, because initially I thought the set up was going to be exactly the same as the original one. Jaws 2 surprised me with a plot that began as a "Where as they now?" and quickly ventured into new and super suspenseful territory, making it worth watching the exact same type of shark, in the exact same setting, with the exact same people. I think the fact that there were more teenagers as victims set the film up to pair well with the slasher films of the same time period, making this work more as a slasher film than the original. All in all, an awesomely decent summer horror flick that's essential for any shark horror fan. 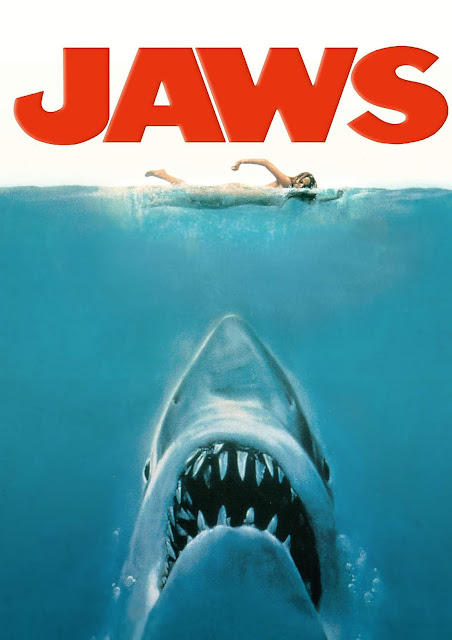 Jeremy: There could be no other choice for the reigning champion of the Jaws franchise, the greatest shark movie of all time, Steven Spielberg's Jaws. With one of the greatest trio of heroes in horror film history in Richard Dreyfuss, Roy Schneider, and Robert Shaw to go up against the most menacing portrayal of the titular shark of all, Jaws is the perfect summer film, one that (unfortunately) has yet to be topped over forty years later. We've all seen this one, we all know the iconic music that literally anyone can pick up on, that iconic opening scene, the problem of the wrong shark being captured, and what I believe is the best scene in all of shark history: The late night speech by Robert Shaw's character before his demise the very next day. This is the essential summer horror movie with a motherfucking shark, and will remain so until it one day faces a worthy character.

Sara: Jaws is a slow burn, so if you are not in the mood to wait until the third act for the bulk of the action and gore, this might not be the movie for you. However, to me, its worth it. Also, I feel like Jaws 2 might be slightly more intense, but the original takes the cake because of one reason alone: Matt Hooper. Comic relief, smarmy, and complete and utter scene stealer. The banter and emotion in the final act alone makes the film, however, this movie will forever be one of the first ones to grab every summer. Might not be my favorite my shark movie of all time, but definitely my go-to every single time when someone says, "Let's watch a shark movie!".

This is our final shark post for shark month, but we have one more very special post for you creeps before the end of the month, so stay tuned! We are also in the final stages of our revamp, but you can always keep up with us on all forms of social media, under @FoxyCatCoven. In the meantime, keep it creepy, kids!
Media Massacres