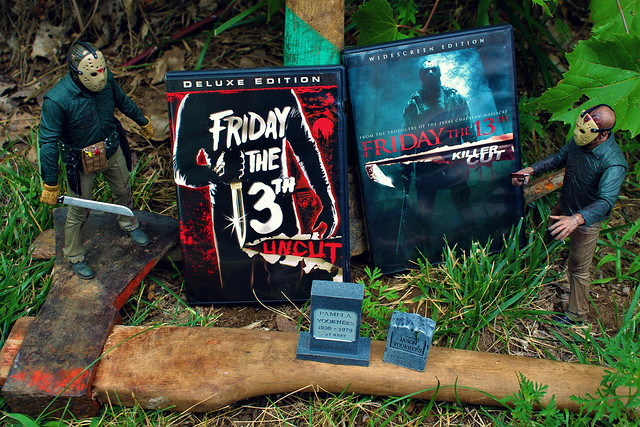 Jeremy: Despite the title of this post, i'm going to also be including material from not only the 1980 original, but its two sequels, as their content is loosely covered in the remake. Good? Fantastic. So let's get down to it. The original Friday the 13th, as everyone and their mother will know, does not feature iconic slasher Jason Voorhees as the killer, but rather his mother. In revenge for the drowning of her son Jason, which may or may not have been caused by some counselors in the 1950's spending more time gettin' busy, and less time watching the inexperienced swimmer, Pamela Voorhees goes on a murder spree in 1979 in order to prevent Camp Crystal Lake from re-opening. This film lies on the more positive side of my opinion of the series, and for a possibly unconventional reason. This might be the most atmospheric film in the entire series, and if you've read any of my past posts you'll know I love that shit. While not featuring the best kills of the series, the best characters, or the best killer, this is the best, most convincing version of the camp setting ever put to a Friday the 13th film. That is, in my opinion.

Anyway, Pamela gets her head cut off by the admittedly boring final girl, Alice, who also finds her end at the hand of Jason at the beginning of: the next film, Friday the 13th Part 2. This sequel is pretty much more of the same as the original, except with bag headed Jason! Counselors get slain in revenge for the killing of his mom, a final girl fucks Jason up, and we move on to Part 3, in 3D! Jason gets his hockey mask in this one and..... the end! And thus, you have a trilogy of films to go up against a remake that tries to pack all this shit into one film. To mixed results. I remember actually loving the remake when I first saw it not too long after its release. For me it ticked all the boxes you expected for a F13 film by that point. It did what it was supposed to do. But is that enough to make it worthy contender to the original films?

Friday the remake glosses over the Pamela story for about three to five minutes, cause we'll probably never get a remake just featuring that plot. People want Jason, and while I don't blame them, it would be even more interesting to me to see a modern take on the slaying that started it all. As is, I believe the remake would've worked better as a sequel. Cut out the Pamela stuff, cut out the first group of teens, and just begin the film with that dude from Supernatural attempting to find his sister. There's simply too much packed into this one film, and it suffers for it. Not just with plot, but the kills, especially for an entry this late in the franchise, are very sub par. Maybe not the worst of the films, but damn near close. There's no creativity here. And while the film looks good in the sense that it looks like a newer movie, washed out in dull colors and often far too dark to see during some of the most pivotal scenes in the film, the remake is a boring thing to look at. But where it shines is the cast, specifically the ill-fated second group of teens? Adults? I don't know. But damn, does their energy and dedication to their characters shine through here to create one of the best groups Jason has had the honor of slaying.

So maybe it comes down to atmosphere vs. casting for me? Who am I kidding, while the remake might have been originally cool to see as something that returned things back to the original Camp Crystal Lake, it's a mess and only exciting for about a third of the film. Where as the original was packed full of that sweet, sweet mood, absolutely drenched in dread. No, there's no Jason to be found (except for, of course, ghost Jason doing a frighten at the end), but he's not the only element needed to make these films work. And for what the original is attempting to accomplish, I think it succeeds in a way the 2009 remake can't touch. 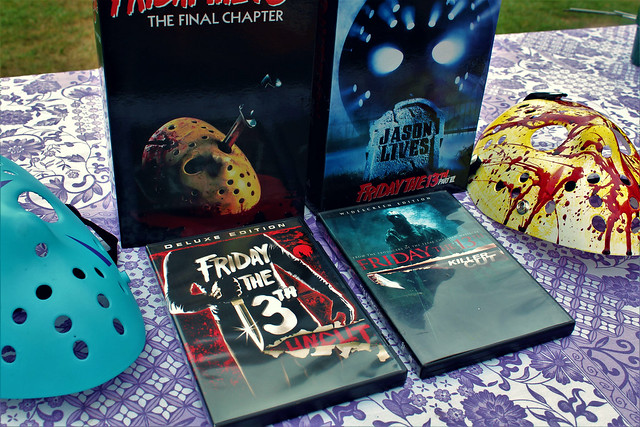 Sara: Friday the 13th was the first horror franchise that I had seen most of the films from, and Jeremy made it his mission in life that I see all of them. Sleepaway Camp, Jaws, and Jeepers Creepers are all arguably great picks for summer horror movies, but Friday the 13th is always a must for me. However, I almost always have to watch the first and second films together, as I feel watching the first one alone, with zero Jason Voorhees, just leaves the viewer feeling a bit unsatisfied. Because, lets be real, the fun doesn't start until good ol' bag-head shows up. I *think* this is what the remake was trying to make up for, by combining elements of the first two, and arguably three (because that's when the iconic hockey mask shows up), which was a great idea in theory, but terrible in execution.

Don't get me wrong, as self-proclaimed biggest Gilmore Girls fan in The Mitten, I have a giant lady-boner for Jared Padalecki. With House of Wax, and Supernatural under his belt, the boy can handle heaping plate full of horror. However, with three separate intros to the movie, resulting in the audience losing interest in the first act alone, mediocre acting, and major plot holes, this was a film that had a great leading actor and expected him to carry the entire movie on his back. Poor Jared. Slasher movies are kind of known for having second-rate actors, that's half the fun, but if you're going to remake an iconic summer slasher film, you might want to invest a little bit more in your cast. Just sayin'.

Lets talk plot holes: The original 1980 film had a bit of a plot hole for me. The opening scene shows two teenagers attempting to fool around in what looks to be a shed, during the night while the rest of the campground is singing around a campfire. Cool beans. The two horny teens quickly meet their demise when Mama Voorhees surprise attacks them for fooling around and not paying attention to the kids, which is how Jason dies. What always confused me is that if they were supposed to be the teens who were fooling around  while Jason dies drowning, wouldn't it have been during the daytime? The argument to that is Jason died during the day, and this was after the fact, entirely plausible, but wouldn't the camp be closed by then? Or at least a more solem atmosphere? Or at the very least, wouldn't the teens who were gettin' it be elsewhere, feeling guilty for not watching little Jason? I just always felt that that the opening scene just didn't add up quite right, and left a lot up to assumption. Well the 2009 remake completely ignores the idea of plot holes. One of the main characters, Trent, his family owns a large cabin on the opposite side of the lake as Camp Blood, insinuating that his family has come up there during the summer for years, and yet THIS exact weekend is the only weekend he has ever run into Jason. The harbinger even pops in to heed her warning that the people of that town like to be left alone, that He, aka: Jason, likes to be left alone, insinuating that as long as those pesky kids stayed out of the remains of Camp Crystal Lake, all is well. WELL. Jason decides to leave his home base in favor of some decent slashing so there goes that theory of only those who trespass get slashed. Lastly, the entire plot of the final girl is just completely weak sauce. She appears in the second part of the opening sequence, only to not reappear until the end of the third act. Also, why the hell did Jason keep her alive for over six weeks?! The idea is that she resembled his mother, but that's honestly a hell of a fucking stretch.

This marks a first for me when it comes to our Original VS Remake posts, I tend to be one who is a sucker for finding lots of elements in remakes that make me really like remakes, but other than Jared's puppy eyes, the remake doesn't give me much to go on. It might work well as a drinking game, so it may fall victim to one of our #BHorrorMovieNight live-tweets, but other than that, the OG Friday the 13th just takes the cake.

Jeremy: I'm going to be taking over operation of the Coven over the coming weekend, so expect plenty of memes I find funny but no one else does! We are just passing the halfway mark for our Friday the 13th month, but fear not, we still have plenty of Jason left before months end, including a first for us: A second B Horror Movie Night in the form of Freddy vs. Jason! Till then, keep it creepy and we'll see you soon!
Media Massacres