Voorhees Cheesecake and The Rise and Fall of Friday the 13th: The Game 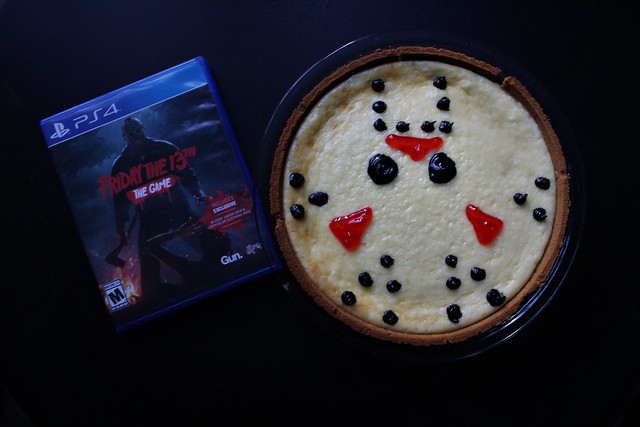 Sara: July is the middle of summer: the perfect time for summer horror movies, hiding in the AC with video games, and day-drinking with friends at cookouts. We did a little bit of all of those over the Fourth of July holiday this past week, and we decided to bring along a cheesecake for the festivities. We then put a Jason Voorhees hockey mask on it, because of course we did. So to kick off Friday the 13th month, I am going to start you spooky kids off with the recipe I used for this month's Spooky Eats choice, and Jeremy is going to talk about his thoughts on Friday the 13th: The Game.

Crust: For this one, we cheated and used a pre-made crust (I know, I know, lame). However, I will provide you creeps with a recipe for a crust that I normally use:

Make the crust by stirring together all of the ingredients. Press the crumbs to the bottom and up the sides of the pan, making a thicker layer on the bottom on the sides. Tip: add cinnamon if you like that sort of thing (you should, it's amazing and tastes like Christmas).

Preheat oven 350 F. Mix together room temperature cream cheese and sugar until smooth. Mix in the eggs and vanilla, again until smooth. To avoid lumps, make sure the cream cheese is room temperature. Place pie pan on a baking sheet, then pour filling into crust. Bake for 30 minutes. It will look a bit poofy when it is done, it will fall when it cools. Set it aside until it is completely cool. Next, get some black icing, and red gel icing and draw on the hockey mask. Set in fridge/cool place until ready to consume. 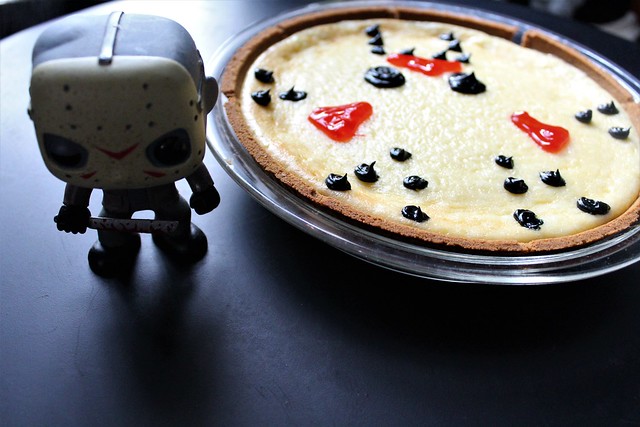 Jeremy: I was late into finding out about the announcement that a Friday the 13th video game was going into production for the next generation. Many fans have become familiar with the last attempt at a Friday the 13th game, namely the 1989 NES version, where players were tasked as a camp counselor to ultimately defeat Jason several times as they side scrolled through cabin after cabin, coming across other enemies such as crows, wolves, and even fucking zombies. The game is generally considered a disaster, bogged down by repetitive gameplay, confusing objectives, and all together lacking in the gritty charm that made the films so beloved at the time. Great fucking soundtrack though? It would take over twenty years, but in 2017, aided by an extensive Kickstarter campaign, the world was treated to the quality Friday the 13th game we've all wished for.

F13: The Game was not a complete game upon release date. For starters, it began its life as an online only game, with three maps: Packanack Lodge (From Friday the 13th Part 2), Higgins Haven (Friday the 13th Part 3), and Camp Crystal Lake (Friday the 13th), a group of counselors made for the game, and the following Jasons: Part 2, 3, 6, 7, 8, and 9. In the year since it's release, though a plethora of free downloadable content, the game would go onto the add: The Jarvis House (The Final Chapter) and Pinehurst (A New Beginning) maps, four new counselors from the films, offline single player, Jason from Part IV and V, basically a huge amount of awesome content. Despite its initial problems with finicky online servers, something that, while improved upon, still needs plenty of work, the experience of being able to load into a perfectly captured map of a Friday the 13th location and run around as either a camp counselor of your choice, or slaughter up to seven of them as Jason fucking Voorhees is a complete fever dream. As far as i'm concerned, it's as close to a perfect digital recreation of the F13 experience as I could possibly ask for.

Things were seemingly getting better and better over the past couple months with the unveiling of future content such as Uber Jason and the Grendel ship map from Jason X, plus even more possibility of adding more characters from the movies and other locations like Camp Forest Green from Jason Lives or even a Manhatten map from Jason Takes Manhattan. But it all came to a halt only several week ago with a lawsuit concerning the rights of the Jason character, putting both the franchise and the game in jeopardy. Eventually, it would all come to a head with the announcement from Gun Media that they would no longer be able to provide new content for their game. Sadness. While the future of Friday the 13th is up in the air right now, fans young and old can still rejoice that what we have right here and now is a truly fantastic recreation of the films in video game form. One I can only hope will someday be expanded upon, be it either a sequel or some other release.

Sara: If this wasn't enough to get you guys started on all things Camp Crystal Lake, you can check out Jeremy's post on the table-top game, Last Friday, based off of Friday the 13th. Also! Tonight is our first of two #BHorrorMovieNight live-tweets that we have on deck for July, and we are going to be watching Friday the 13th Part VIII: Jason Takes Manhattan (1989). Follow along on Twitter @FoxyCatCoven and be sure to use the hashtag, as we will retweet our favorites throughout the evening. The film is available to rent on both YouTube and Amazon, so we will see ya at 9:30 pm, EST. Keep it creepy, kids!
Spooky Eats