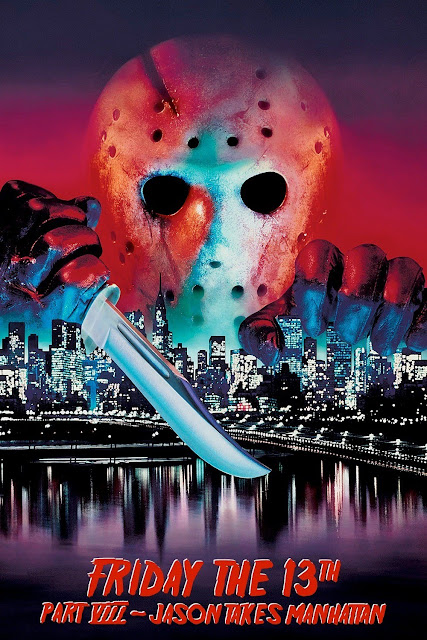 Jeremy: Jason Takes Manhattan was one of the later Friday the 13th sequels I saw. While the title was definitely fodder to get me hyped over a brilliant concept, the word all over the web painted an all together different picture. Jason doesn't take shit in this film. Is it a bad film? Objectively, yes. Do I still have a guilty pleasure for it? When the mood takes me, you bet your ass I do. Bogged down by lackluster performances and confused direction, the saving grace for Manhattan comes in the form of so bad it's good haphazardness. With such bullshit thrown in as Freddy Krueger-like dream sequences, a teleporting Jason, and over half the film not spent in New York, you wonder what specifically I could see in this particular Friday entry? How about a kick ass opening theme song, setting the perfect tone for a late 80's romp through the shit hole New York once was? Or maybe one of my favorite Jason costumes of all time? Not to mention a Jason that doesn't even follow the logic of reality, with the aforementioned teleporting to places he couldn't possibly have gotten to so quickly. The whole film feels like a dream, as though it's simply a what if scenario.

I think I can appreciate it more so with that concept in mind. And really, for the eighth entry in a long running franchise, the choice to try something new to mix up the formula is commendable enough on its own. While the film doesn't stick the landing, I still have a soft spot for its oddball nature. Which is something I can't say for movies like Friday the 13th Part V: A New Beginning, another "out there" sequel with less favorable results. This would be the final film released by Paramount Pictures until the remake in 2009. Thankfully it wouldn't be the intended end of the series because, despite the praise I will continue to send its way, Jason Takes Manhattan easily has the worst ending of any Friday the 13th film. Opting to transform Jason back into a child after he gets a shower of toxic waste is too out there for even this creep. Nevertheless, it was a great movie for a live-tweet and definitely was one the funniest drunk riffing we've done thus far. 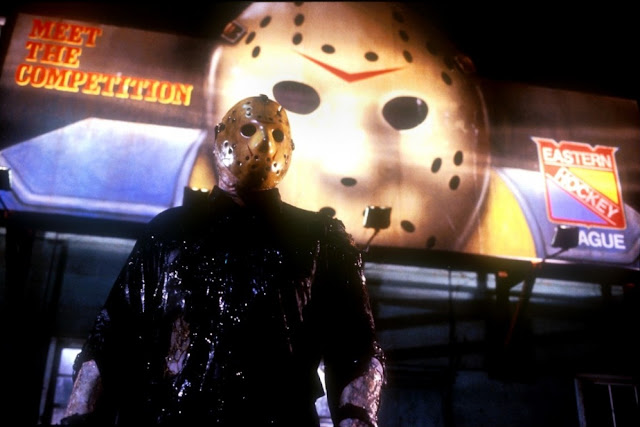 "James Cameron literally made Titanic by removing Jason Voorhees from this movie." - OurDarkLordPan

Sara: For awhile there it was difficult for me to remember what happened in what Friday the 13th movie, however I always remembered Boat Jason (part VIII) and Space Jason (Part X). Boat Jason was a favorite because despite the lack of blood and gore, this movie had some of my favorite kills. From the rocker girl getting axed by her own...axe, to the guy in the sauna getting more than just a detox, to the girl getting murdered on a dance floor, this film has some of the most hilarious deaths. Not to say that Part VIII didn't come without its faults, there were plenty. For one, I have seen this movie numerous times and yet I still can't exactly figure out the relationship between our main protagonist, Rennie and Teacher Charles. Is he her step-dad? An old family-friend, as well as her teacher? They have a bit of an awkward and strenuous relationship, which is a bit confusing, but I guess works because what horror movie isn't complete without layers of drama? I would have to argue that despite the fact that Jason is barely in Manhattan, the few scenes that he is in are completely solid. He oh so gracefully smashes over a group of punks boom box, and wins the confrontation with the tip of his mask, resulting in some spot-on comic relief. The stare-down with the bulletin board advertising a hockey mask is pretty iconic as well, but despite expecting the Teenage Mutant Ninja Turtles to pop up around every corner, the real saving grace of this masterpiece is a move very rarely made in horror film history: the dog lives.

We still have more Friday the 13th coming for you this month, and this weekend is our camping trip up to Camp Krystal Lake in Vassar, MI! We plan on having a special post for you creeps when we get back, and as long as we have internet access we will be sure to post to our Instagram stories, so be sure to follow along @FoxyCatCoven. In the meantime, tell us your thoughts on Friday the 13th Part VIII: Jason Takes Manhattan! Is Boat Jason your favorite Jason? Hate this film in its entirety? Drop us a comment and, keep it creepy, kids.
B. Horror Movie Night