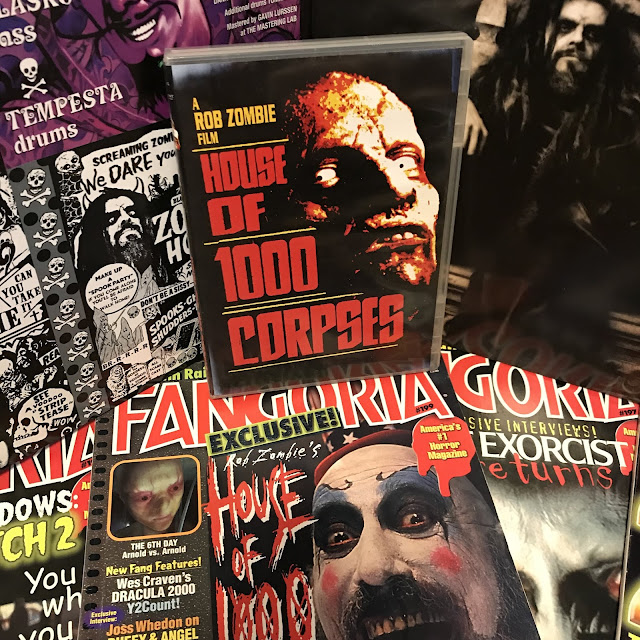 Jeremy: The Rob Zombie/Marilyn Manson concert tour Twins of Evil: The Second Coming 2018, a tour Sara and I recently had the honor of attending the first show of, is still going strong, while my mind is whirling over what will come of Zombie's next film, a surprise sequel to The Devil's Rejects. While the "teaser" for that film, dubbed "3 From Hell", that was unveiled during Twins of Evil was less a teaser, and more just a collection of scenes taken from the ending of Devils Rejects, it got me thinking back, not only to Rejects, but to the film that started it all: House of 1000 Corpses. Something you should know right off, i've flipped on whether I hate Corpses or not for years. But like nearly every other Zombie fan, I thought Rejects was gritty, 70's grindhouse perfection. His best film, and a sentiment I held for the longest time. That is, until this last year.


I was a little over three years late to House of 1000 Corpses, at a time where I was just getting out of high school, Devils Rejects already out, and the Halloween remake on the horizon. Whether to do with where I was in my life or not, it took me several attempts over a years time for me to actually finish watching Corpses all the way through. Not for any aversion to the violence depicted, I just thought the fucking film was annoying as hell. A feeling primarily directed at the films antagonists, the Firefly family, from Grandpa Hugo's nonsensical on-stage monologue, to practically anything Sherri Moon Zombie's character, Baby, says or does, it just wasn't something I could get into. And that was a huge letdown, and why I continued to give it chance after chance. I went in fully expecting to love this movie. But with the best character in the film, Captain Spaulding, feeling completely under utilized, the choppy editing reminiscent of the type of music video i'd already seen countless times before, and the intentionally uninteresting cast of hapless teenagers, I ultimately felt what the world was given was far worse than the potential it could have had.

That was me then, now over ten years ago. I went on to see Devils Rejects and found it to redeem what was missing from the first film. Suddenly I understood these characters, they were no longer cliched or grating, but a badass group of motherfuckers in a world  based on one of my favorite eras of horror. Now don't get me wrong, I loved the type of horror movie that I thought Corpses was trying to be, with its more off the wall, satanically goofy depiction of terror. But my instant love for Rejects left the memory of it's predecessor in the dust, as I directed my attention to what would come from Rob Zombie's filmography for years to come. For all the disappointments (Halloween, Halloween II, 31) to a film I actually really loved (The Lords of Salem), I still refused to revisit Corpses in its entirety. In all honestly, eventually it became less out of hostility, and more like simply a general feeling of disinterest. That was, at least, until the announcement dropped that there was going to be yet another film set in this universe, and coming soon.

Long story short, I figured what the hell, i'll give these two films a re-watch in preparation for the eventual (end?) to the Firefly family saga. And you know what? Here we are barely over halfway through 2018, and i've watched House of 1000 Corpses three times already! For what distaste I once had for it is all but gone, and I can now say that i've grown to actually love the style, plot, and depiction of the characters in this film even more than I do Rejects. But what caused me to have such a dramatic turn around you might not be asking? While I still am very much in love with the sequels grindhouse style, I can't shake the fact that Corpses is just a far more entertaining film to me. I may still feel that Spaulding doesn't get enough screen time, or the heroes still suck. But in the case of the latter, that's very clearly the point and I finally can appreciate that. Not only that, the "house of horrors" setting is so well executed and welcome to my sensibilities these days, creating scenes I find even more unsettling than what Rejects has to offer. Corpses is a colorful feature in both personality and hue, and in the end, that's what counts for me when being driven to revisit these two films.

Both Corpses and Rejects are popcorn films for me, they work best when viewed together with friends who can react along with you. They aren't grabbing you by the brain stem and trying to get you to ponder anything. That should not be the goal. They are visual showcases, and I just happen to think House of 1000 Corpses, for all the shit i've given it over the years, is better at accomplishing that spectacle. Both great films, and something I hope can be expanded upon with 3 From Hell. Disembodied fingers crossed. 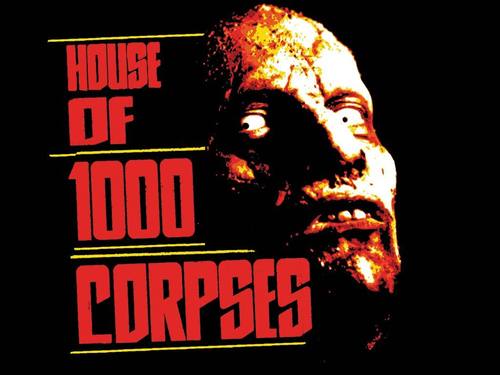