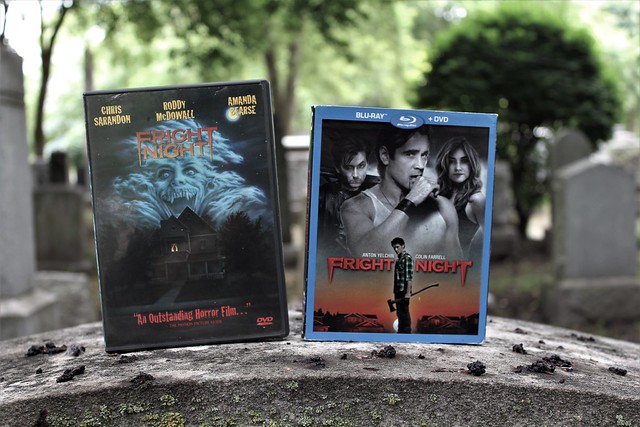 A horror-obsessed teenager discovers that his next door neighbor is a murderous vampire. He tries to convince the police, his family, and his friends but to no avail. He decides to take matters in his own hands.

Jeremy: For our month of horror comedy fried gold, we decided to tackle the vampire classic Fright Night, paired with its 2011 remake. Something I can immediately comment on is that, despite us both being generally skeptical of horror remakes, this match up proved to be a very close call. I think this primarily came down to the remakes dedication in straying far, but not too far, from the original source material. It dared to be different enough without sacrificing the quality of the original film. That's not to say I didn't have some complaints with the remake. In fact, both films (especially the remake) are guilty of dating themselves, from the originals synth heavy 80's soundtrack, to the remakes insistence on dropping as many Twilight references as possible. While these can be distracting (who I am kidding, I fucking love the originals soundtrack), they in no way affect my view that these are some of the most entertaining vampire films i've ever seen.

Sara: I tend to view remakes as their own film before I start comparing, just to give it a chance. However, I had the benefit of viewing both of these movies with Fright Night virgin eyes, so I got the opportunity to have a fresh view of both films, and to me they are two completely different movies. That being said, I didn't grow up watching the 1985 version, so I therefore had no nostalgia attached to it, like most people do. I am however a giant Whovian, so I was worried that David Tennant's (aka the Tenth Doctor Who) presence was going to immediately trump everything that the original had to offer. I was pleasantly surprised with both versions, and I will admit up front that I was unable to choose a favorite. Though Tennant's Peter Vincent totally won over Roddy Mc Dowall's (sorry, bro). 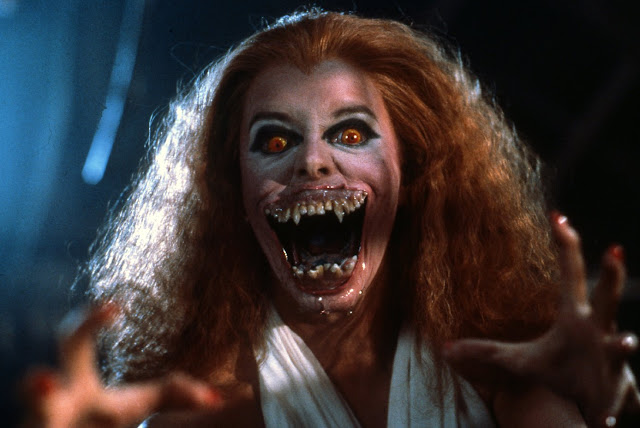 Jeremy: While the names are unchanged, along with the general plot, the remake takes some liberty's in updating the story for modern times. Where Peter Vincent and his show, Fright Night, was a throwback to the Universal and Hammer horror films of times long past, the Peter Vincent of 2011 presents himself as a Criss Angel caricature, battling vampires in highly stylized Las Vegas shows. The role of lead hero Charley, a believer in the plausibility of vampires in the original, is reversed in the remake with his friend ,"Evil" Ed, providing Charley with warning on the vampire Jerry's coming reign of terror. Jerry is portrayed as charming and seductive in the 1985 film, with a henchman to do his daytime bidding. Portrayed by Chris Sarandon (of Child's Play fame), the original's Jerry is a polar opposite to Colin Farrell's remake portrayal who, while having somewhat of a suave edge, acts primarily on his aggressive animal nature, as he attempts to build his vampire army. I'm split down the middle on my preference of either film's performances. Where I preferred the remakes versions of Peter Vincent and Charley Brewster, I found much greater appreciation in the characterization of Evil Ed and the vampire Jerry in the original. But as for the supporting characters, which really only consists of Amy and whatever the hell Charley's moms name is, they are pretty interchangeable between both movies. No comment, although definitely thought Amy's vampire was far sinister in the remake.

Sara: Personally, I preferred the suave Vampire Jerry as opposed to the more aggressive-natured one in the remake. The likeable disposition made it more difficult for anyone to believe Charley in the original story versus the remake. I also preferred the Evil Ed in the original, I felt he added more humor to the overall story, even if he was pretty annoying at times. The remake added a lot of melodrama to the character's backstory, between Ed and Charlie, the mom, as well as Peter Vincent. I thought that it aided in making characters have a bit more depth to them, which I liked. The remake didn't include any shape-shifting for the vampires either, which I thought kept things a little more simple and focused which I liked. The remake also amped up Peter Vincent's douchery which, in my opinion, resulted in a majority of the humor in the remake, that and Ed's vampire attack sequence. The rest of the remake I found a little lacking in the humor department. There is something to be said about the original's special effects as well: I am not completely opposed to CGI, and I do agree with Jeremy that the remake does a great job of making the vampires look pretty terrifying, but I still have a soft spot for eighties practical effects. I loved how creepy Amy looked, despite that random longer red wig that didn't match her hair for the rest of the film. Still, it was aesthetically pleasing nonetheless.

Jeremy: 1985's Fright Night was directed by Tom Holland, known for his work on the Twilight Zone, and directing both The Langoliers and Child's Play. Where as the 2011 remake was directed by Craig Gillespie, known for directing I, Tonya and that one movie about a sex doll. How then that these movies end up being equal in quality to me is a bit of a mystery. I didn't grow up with the original, and for those who did, my choice to declare this a stalemate might come as a surprise to you. Either way, I believe both films play up their strengths very well. while still presenting widely different, exciting experiences. And yet, neither surpasses the other in my view. That is, at least for now. 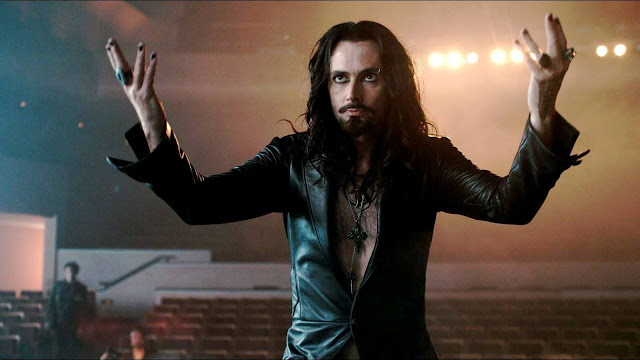 Sara: Even though we both failed to pick a favorite between these films, we took a vote to Twitter earlier in the week and let you creeps decide! And the winner was: The 1985 original! I can't say that i'm surprised, it is, after all, a complete classic.

Have any further thoughts on these films? A preference between the original vs. remake? Drop us a line! We will be back next week with a post recapping our top five horror comedies to cap off our horror comedy month of June. So stay tuned for that and in the meantime, keep it creepy, kids!
Media Massacres