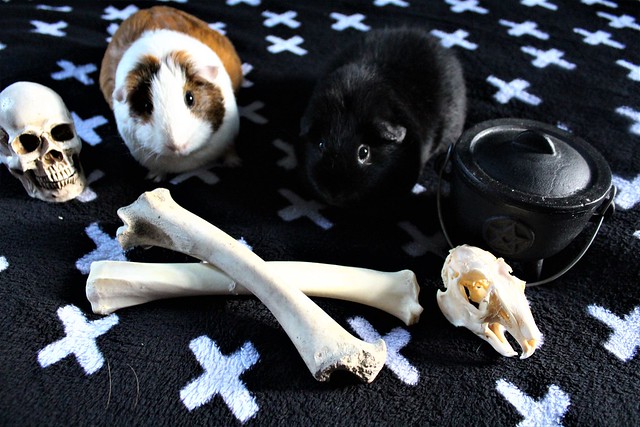 Sara: Originally we had another cemetery photo shoot scheduled over the weekend, but the combination of heat and rain made the weather here in Michigan nice and disgusting, so we decided to do something a little simpler and personal for today's post. Introducing: Pennywise and Gizmo, The Princesses Of Doom.

As mentioned in our very first post, Jeremy and I actually started our relationship long-distance. During many of our text-messages and phone conversations, Jeremy had mentioned several times how he always wanted a black cat named Binx. Although I already had a 95 pound lab-mix named Louie, I always loved cats. So it was decided that as soon as we got our first place together, we would get Binx. In April of 2017, we got our first apartment together. After a few weeks of moving in, we wanted to get a cat, but we put the brakes on getting a pet due to a slight issue we had: cockroaches. Seriously, we have watched so many horror movies, and creepy TV shows, but nothing is more disturbing than evil bastard bugs that will not die. After four months of bleaching everything in our apartment, having it professionally sprayed five times, as well as fogged, we decided that it was a useless battle. We broke our lease, and rage-moved back to Ferndale where we currently reside until we find a decent (cockroach free) place of our own. 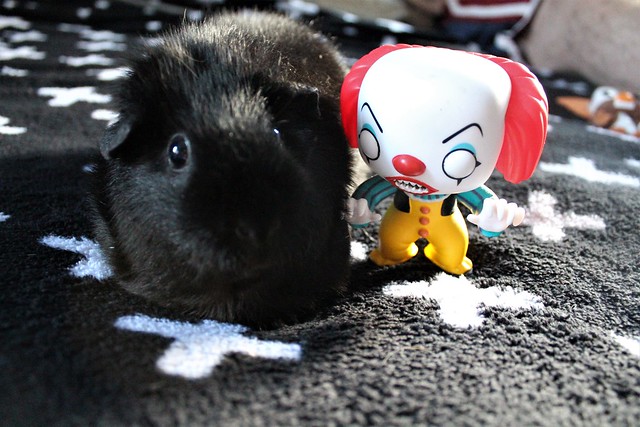 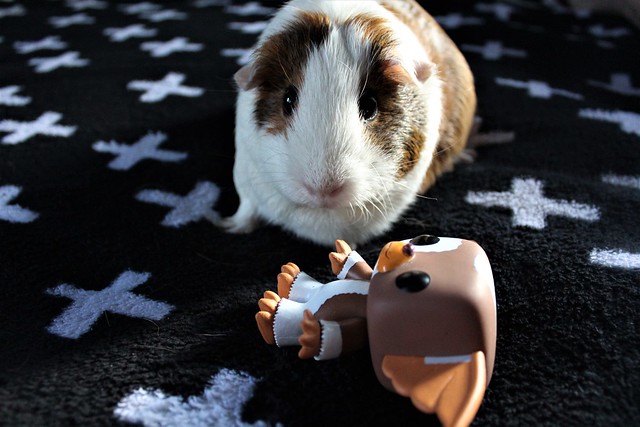 Jeremy: This situation led us to re-considering the whole pet situation for a bit, that is until Sara started leading me on the path to accepting some motherfucking cute as hell guinea pigs into my life. Although I was initially hesitant, especially considering I had never lived with or owned any kind of rodent, it literally took showing me a couple videos of the signature wheeking sound they make in order to get me to fall in love with these little bastards. A week or two later, we met Pennywise and Gizmo, although they weren't called that at the time. In fact, I still can't remember their given names, as we were very quick to christen them with more horror-centric monikers. Pennywise for her penny shaped shade of copper on her fur, and Gizmo for looking like a chubby version of the star of Gremlins.

Parenting for two guinea pigs has involved far more cleaning and personal care than I think any animal i've yet to come across. And yet, for all the work that goes into making sure they are happy, I wouldn't trade the experience for anything else. We've taken many photos with them already, as can be seen in some of our past blog posts, but we thought we'd share a couple new ones here. We hope to continue to be parents to other future guinea pigs, but Pennywise and Gizmo will always be the most special pigs to me. And they totally didn't force me to write all that. 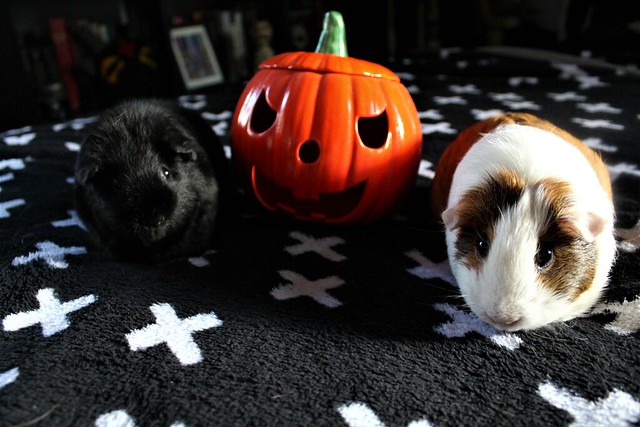 Sara: Even though we are already halfway though June, we still have a couple horror-comedy themed posts coming up for you guys: an original vs remake, as well as our top five horror-comedies, so stay tuned for those. In the meantime, you can join our Coven Creeps group, located right on our Facebook page, so just send us a request and we will add you in! As usual, keep it creepy, kids!