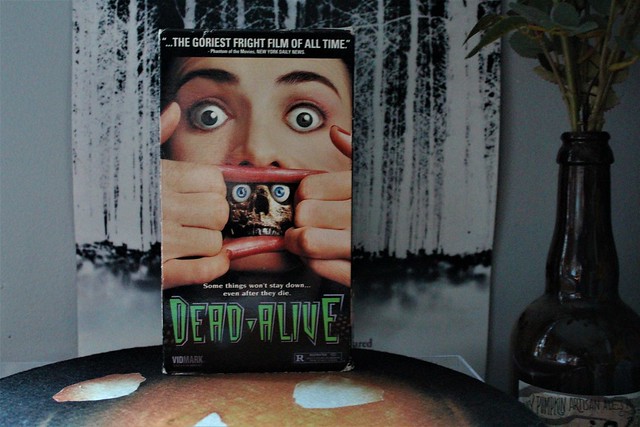 *This post contains spoilers from the 1992 film, Dead Alive

Synopsis: A young man's mother is bitten by a Sumatran rat-monkey. She gets sick and dies, at which time she comes back to life, killing and eating dogs, nurses, friends, and neighbors.

@OurDarkLordPan: You're never too late for buckets of gelatin #BHorrorMovieNight

Jeremy: Kicking off our horror comedy theme for the month of June, we chose the zombie horror classic Dead Alive for #BHorrorMovieNight. Going in, I already knew this film was fucking amazing, but I definitely gained an even greater appreciation for its humor this time around. Something that's becoming a trend with these b horror nights. Where as, in the past, i've soaked up the films claim to fame as the goriest movie of all time, I never gave it credit as not only a hilarious movie, but one with a cute as fuck love story. That shit gets to me every time.

Peter Jackson is primarily known for Lord of the Rings, King Kong, the Hobbit trilogy, etc. and it's still a damn shame that Dead Alive remains enough of  a cult film that it's never been given the proper recognition it deserves. While significantly cheesier than anything that would follow years later, it's still a film that is refreshingly self aware, boating fantastic practical effects and more bloody mayhem than was thought possible at the time of its release. I distinctly remember from my childhood seeing the VHS box at the local videostore. Without taking it seriously enough to seek it out well into my 20's, it always caught my attention for its nonsensical cover and the back of the box promise of "rock n' roll dismemberments".

This might have been the easiest film to discuss that we've done so far. With such iconic scenes like the zombie baby, kung fu fighting priest, the lawnmower decimation, the list goes on. With this being Sara's first time seeing Dead Alive, I loved being able to anticipate all these classic moments, waiting for her reaction to them. We did run into a bit of trouble though early into the film after realizing that my VHS copy was the R-rated version (One which removes nearly all the gory bits, basically castrating the film). We ended up switching over to the unrated Blu-ray version, and honestly, I can't see how you could watch it any other way. You just can't appreciate Dead Alive if you're not getting the director's complete vision of it. 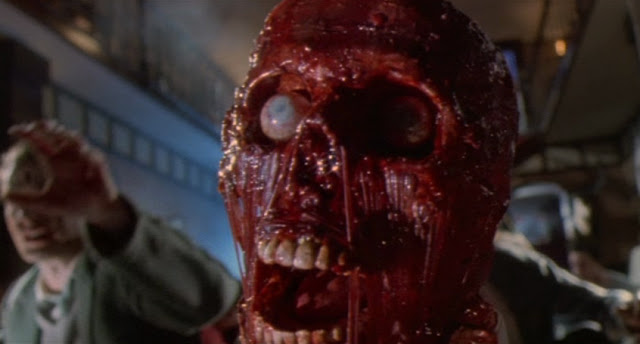 @LannieLanners: I'd actually attend church to see someone kick ass for the lord

Sara: I had only seen bits of this movie in the past, so I was more than stoked to FINALLY watch this movie! I completely agree that the two main characters were adorable as all hell. but holy shit Lionel made completely terrible decisions 90 percent of the film. Not wanting to immediately destroy his zombie-mom was understandable, however, shit gets out of control fast when he starts hoarding all of the zombie's in the basement. One of my favorite scenes is when the mutant-zombie baby appears and Lionel gets the brilliant idea to take the baby out of the house, to a park, and pretend like he has a real baby with him. There is no legit reason for this, other than to create a hilarious scene of Lionel getting his ass kicked by this toddler from hell, but at this point he kinda deserves it because stupidity. The creepy, asshole uncle surprised me by lasting a lot longer than I anticipated, he actually put up a good fight during the massive fight scene, and kinda redeemed himself. I fully admire Paquita's determination in this movie, however, if my boyfriend's mom ate my dog that would be an instant deal-breaker. Shit was brutal.

This movie was so completely disgusting, and I loved it. It instantly became a favorite of mine for the horror-comedy genre, and I am slightly mad at myself for waiting so long to watch it. I feel like Dead Alive is probably going to be one of my go-to's for when we want to just throw on a movie in the background. I probably loved the special effects most of all, because they went above and beyond with not only the ridiculousness of the gore (fists punching through the back of skulls, completely clean through the face), but also the details. I am pretty sure the image of Lionel's beast-mom's monstrous tits will be forever embedded in my brain.

What are your thoughts on Dead Alive? Love it/hate it, drop us a comment here or on our Facebook page or Twitter! While you are at it, join our Coven Creeps group, located right on our Facebook page, send us a request and we will get you approved! We have another awesome post lined up for you this week, Jeremy's review of Last Friday, a really awesome horror board game, so be sure to look for that! In the meantime, keep it creepy!
B. Horror Movie Night