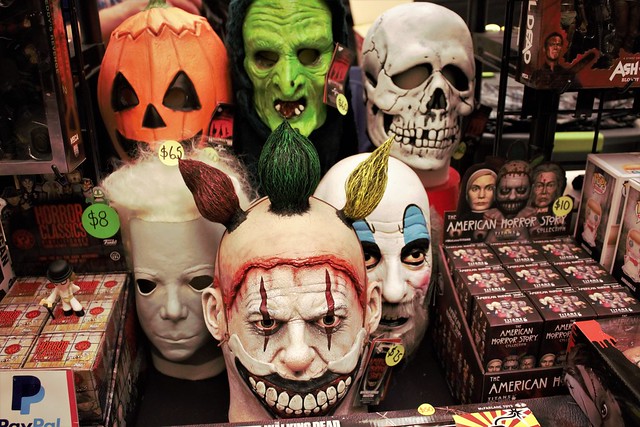 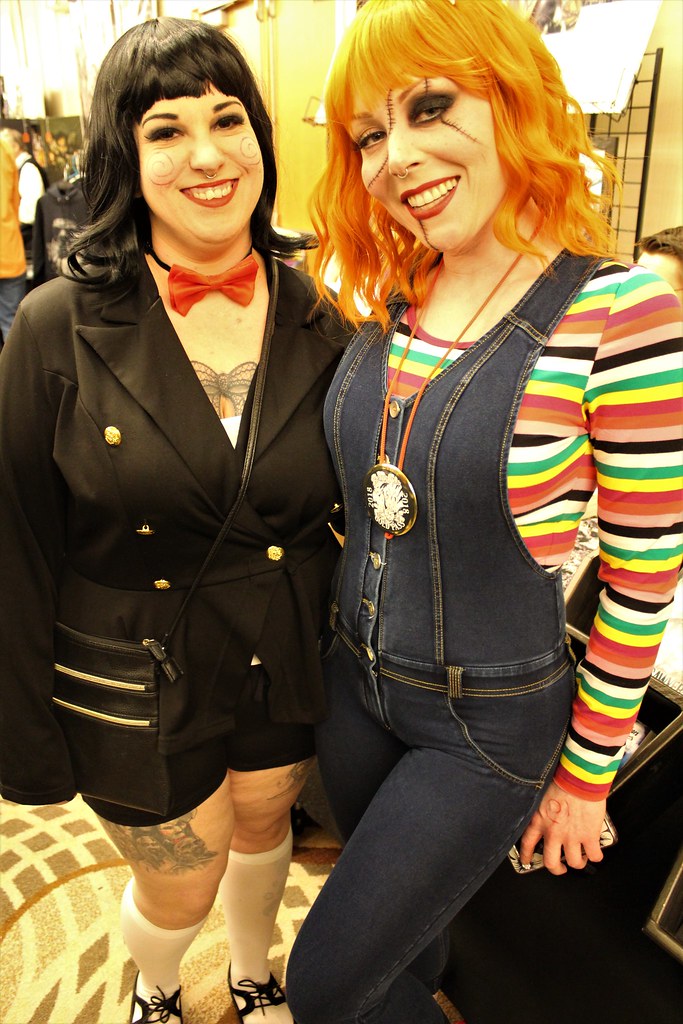 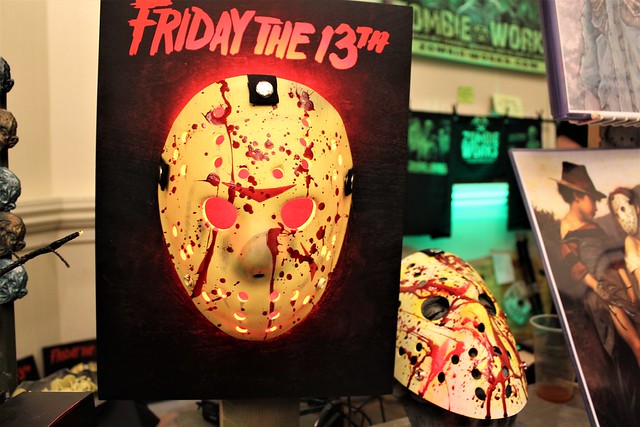 Jeremy: I had never been to a horror convention, let alone any sort of convention, before our recent outing to Motor City Nightmares, last month. In fact, I strongly believe that if not for the perfect storm of meeting Sara and being exposed on social media to other horror fanatics experiences at cons, I may never have gone. I'd always been somewhat of a private person when it came to my horror obsession. Instead, choosing to share it strictly with friends who came out of the mold to proclaim that they too loved the genre. It wasn't until about three years ago, after joining Instagram, that I was finally exposed to the awesome horror community, one that I immediately felt a sense of belonging in. Meeting Sara some time later helped crack what was left of my shell. At the time, even though I was already interacting with several members of the community, it was still not quite on a scale that I could see myself going to any sort of event, save for movie premieres and that sort of thing. But as of writing, that's all changed. Motor City Nightmares was an amazing experience that has opened the door for me to want to get more involved with the community, especially on behalf of this little blog we have.

Sara: Although this was my first time attending Motor City Nightmares, I have had previous con experience before at Motor City Comic Con, which is held very close to the same area as Nightmares. I still honestly had no idea what to expect, as this was also a film festival. Lucky for me, some of our friends were walking up at the same time that we were, so they gave us a rundown on where to go. There was a Walking Dead panel starting right as we were walking in, but as soon as we saw the sea of vendor booths we were immediately distracted. Seemingly everyone in attendance was doing a bad-ass cosplay, or they were rocking their best horror garb. Saturday (the day we attended) was the costume contest, and you bet your creepy asses that at least one member of this coven will be participating next year. 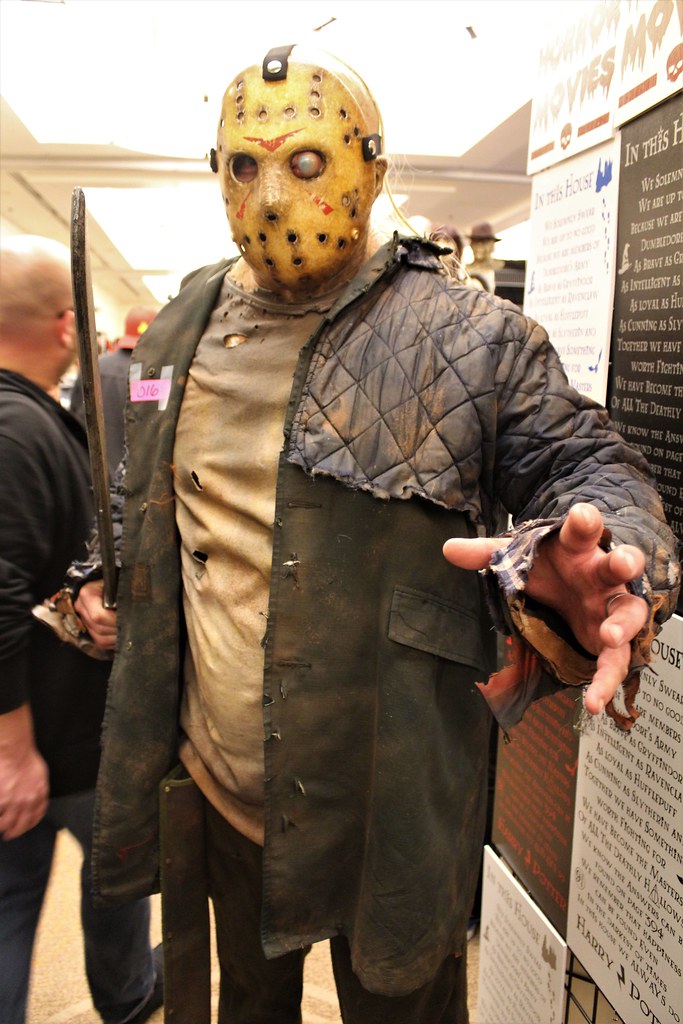 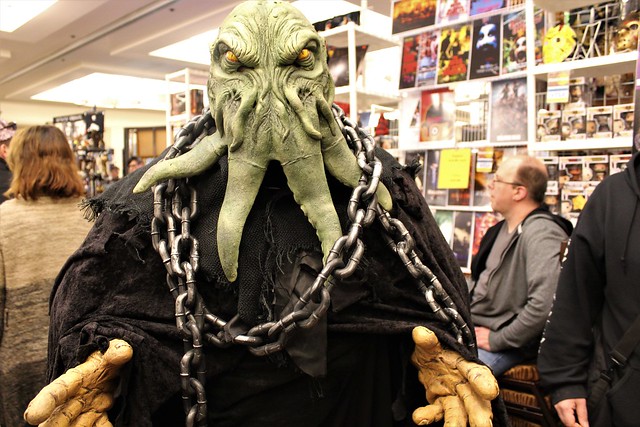 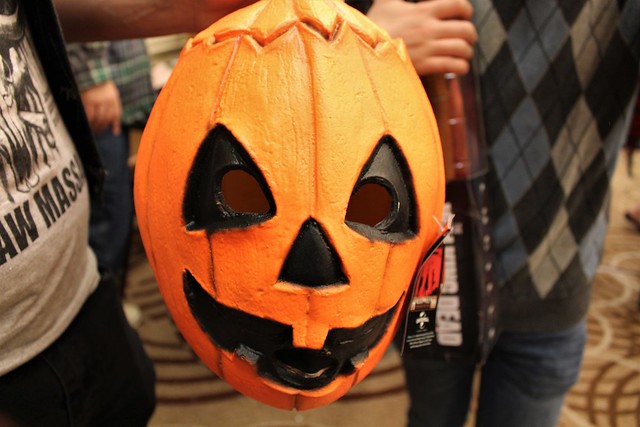 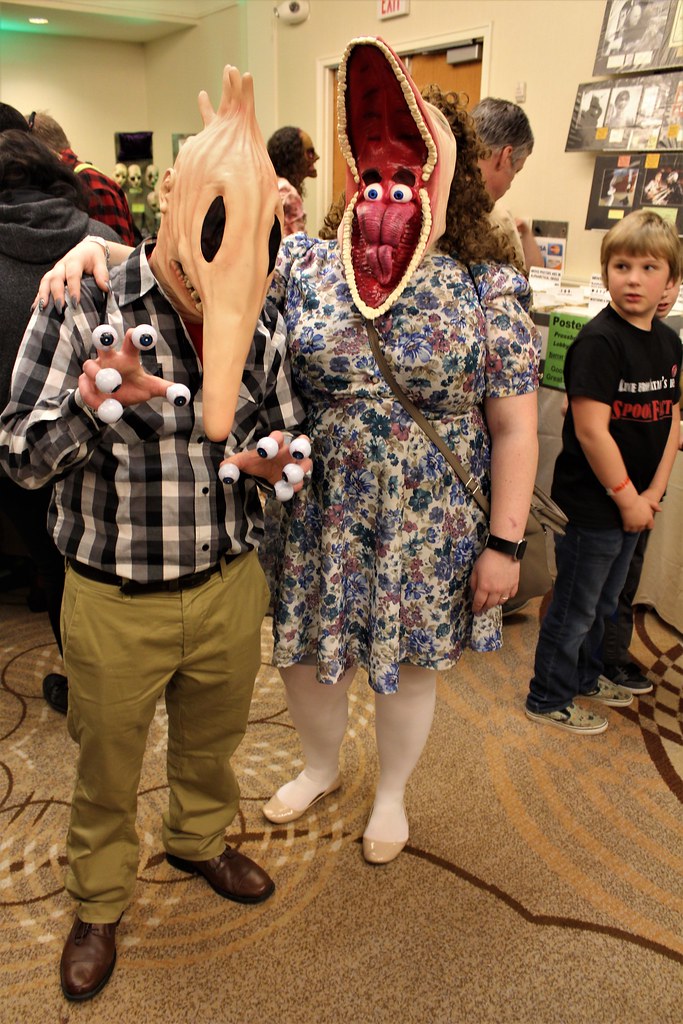 Jeremy: While several well-known horror names were in attendance, we had settled on that we were going to at least have to meet Halloween star, Danielle Harris. While it would have been more than awesome to meet such people there as Linda Blair, Sid Haig, or Malcolm McDowell, i'm so glad it went the way it did this time, coming away with a signed copy of Halloween 4 from Harris. I know for a lot of people who have been to cons, or been in some capacity to be in the presence of their favorite celebrity's, it's not a big deal to even be able to be in the same room as so many beloved actors and actresses. But for me? You bet your fucking ass it was, I was stoked! Not to mention I have to hand it to all the vendors that came out, offering tons of fantastic horror merch that I could hardly resist buying all of (Probably my favorite being the Halloween III pumpkin mask, which I literally spent hours trying to justify, ultimately giving in). So much credit as well goes to every one of the truly badass cosplays, some of which you can see pictured here. Their dedication and creativity really add a hell of a lot to the overall experience.

Sara: One of my favorite aspects of this con, is all of the unique art vendors. Of course there were loads of booths selling all sorts of merch (I just HAD to have a Trick-or-Treat pumpkin sucker replica, because Sam), however, there were patches, purses, pins, sculptures, paintings, jewelry, you name it. I scored an awesome hand-made Black Phillip pillow from Bearcat Creations, as well as some cool spooky ornaments that I fully plan on making into a necklace. I chatted with a bunch of the artists, and it was really amazing to find that they were not just from Michigan, but all over the country. RIP my poor wallet. 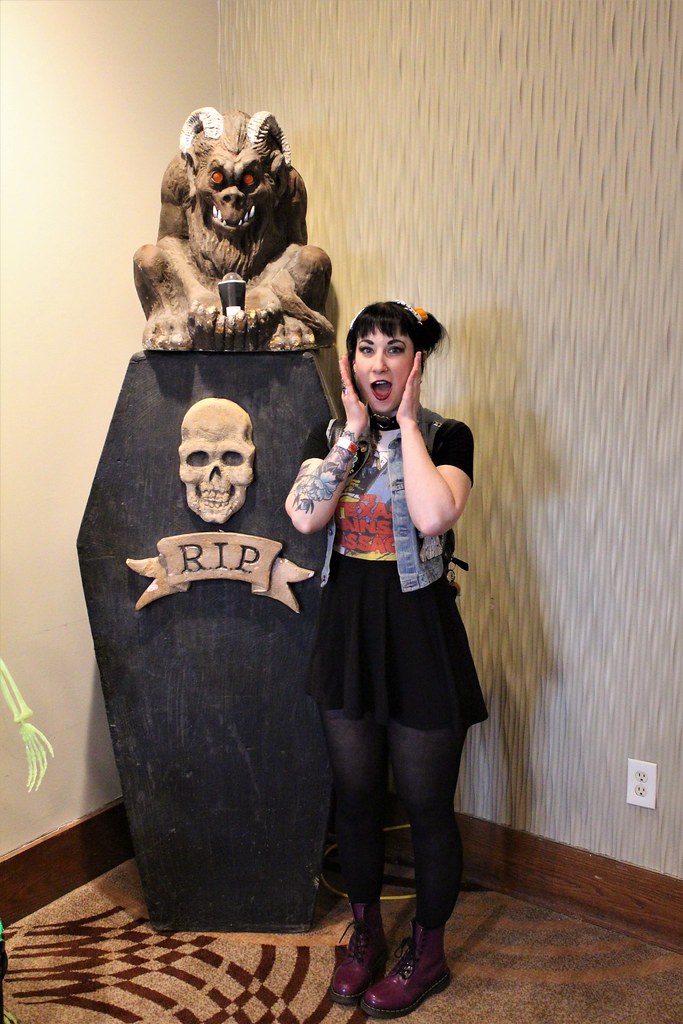 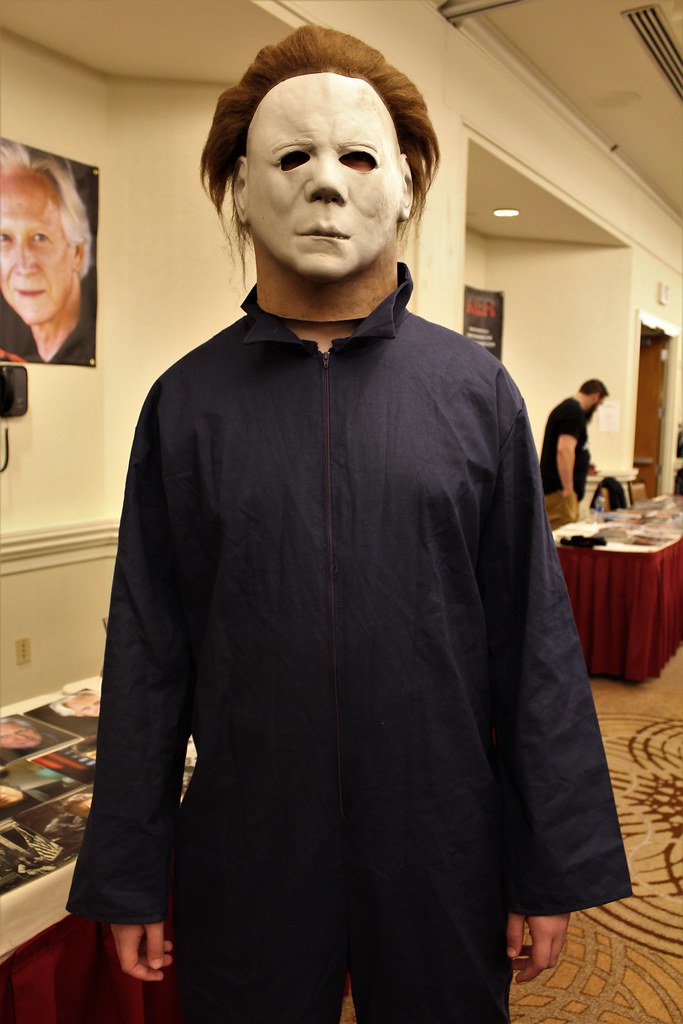 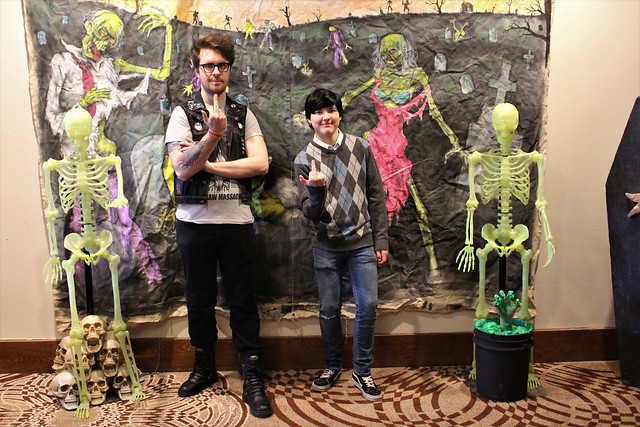 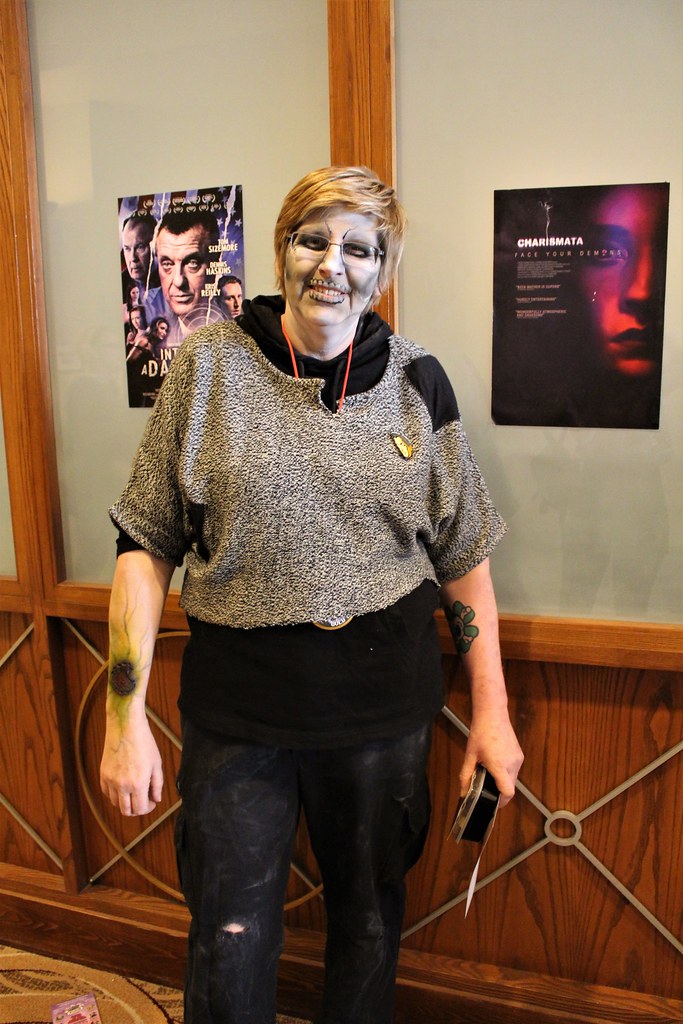 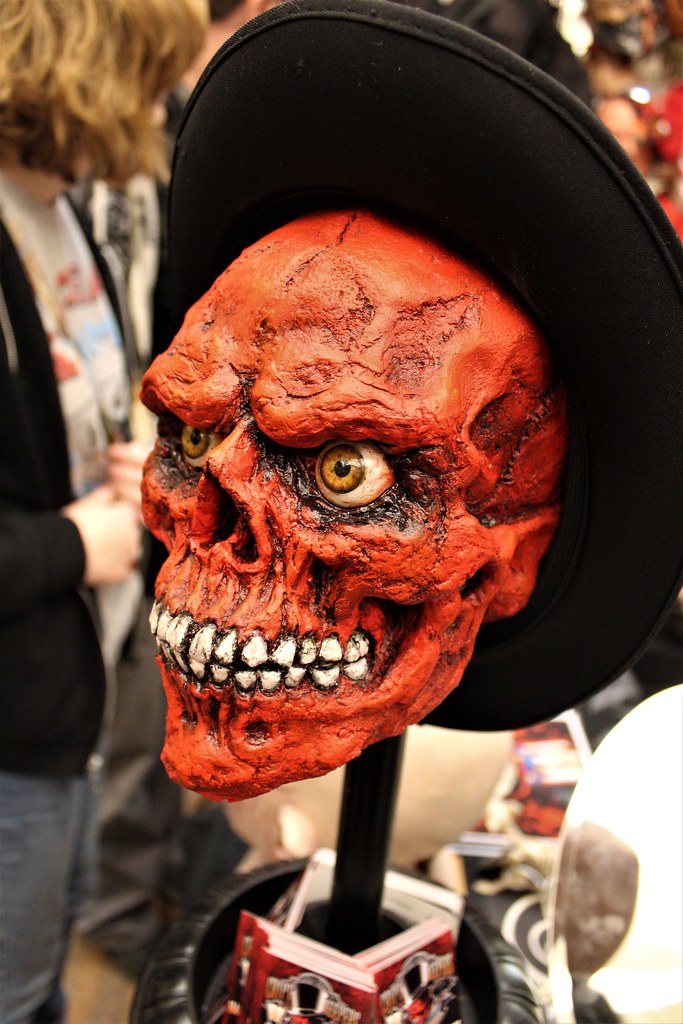 Jeremy: There was a ton to do here, including discussion panels, rooms all around the hotel playing indie horror films, photo shoots with horror icons, and of course the main floor, where the meet and greets, vendors, and more costumes than you could shake a machete at, were. It was initially a bit overwhelming, mostly due to the fact I was like a kid jacked up on steroids, but we eventually found our way around, having to continuously loop the main floor multiple times to make sure we saw everything. This year we spent getting to know how this convention works, so we ended up missing out on several things including the panels, the movies (except for one we stumbled in on, leaving halfway through because it left us with the sudden urge to be decapitated on the spot than sit through another minute), and the after party. A little disappointing, as who knows who we could have interacted with without the price tag that comes along with that sort of thing. Still, I wouldn't trade the entire experience for the world, it was a great first horror con and I will absolutely be going again next year.

Sara: I think one of the best highlights of this experience for me was finding a bunch of friends from different social groups in attendance. We tend to run with the oddballs, the weirdos, and the nerds, and finding places like this convention is a lot like when I first discovered the Renaissance festival. Places where us creeps can hangout, gush over our favorite movies and genres without judgement, and dress up our spooky icons is always aces in my book.

Tomorrow night is our next #BHorrorMovie live-tweet, and we are going to be watching Queen of the Damned (2002), which is available right now on Netflix! We will be starting at our usual time of 9:30 EST, and of course we will be adding our favorite tweets from the evening to our review post so be sure to use the hashtag and follow along at @FoxyCatCoven. In the meantime, keep it creepy!