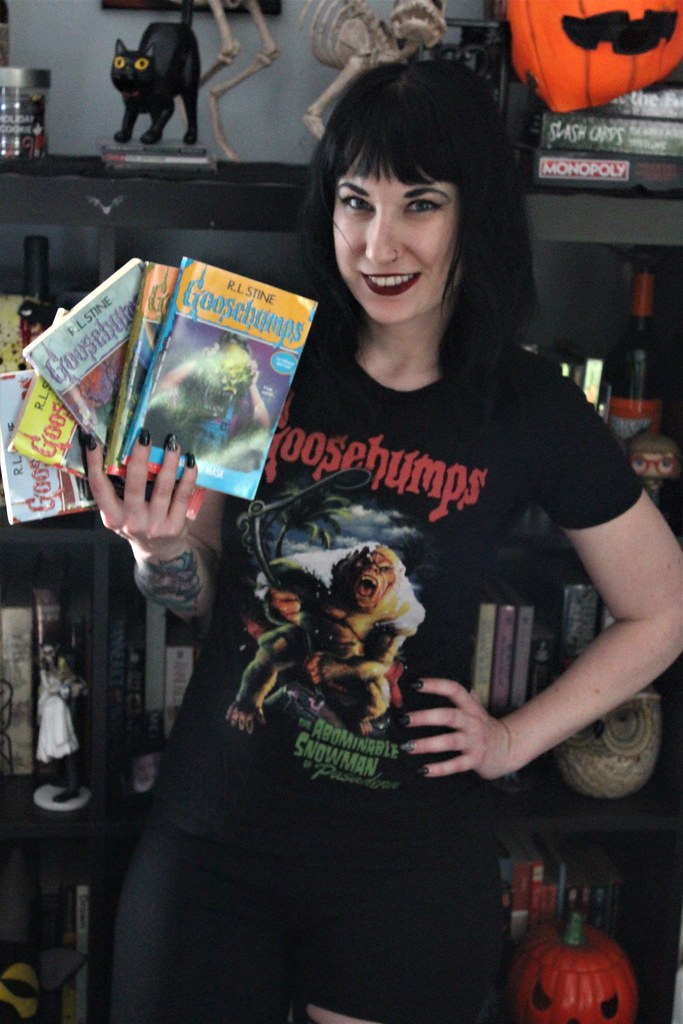 Jeremy: Revisiting Goosebumps after over ten years of complete indifference, save for some choice moments of nostalgia, has left me with both a renewed appreciation, and reconsideration, over this classic book/TV series. As mentioned in our previous 90's Goosebumps post (go check it out! It's cool n' shit), I could tell even as a child that what I was reading wasn't going to go down in history as any kind of masterful work of literature. But as with the far superior Stephen King, R.L. Stine created a franchise akin to the fast food industry, churning out novel after novel, with huge variations in quality. I can appreciate that. And, after revisiting some of my favorite novels from the original 62 book series, while not as terrifying as my younger mind would think, I still found some of them to be relatively entertaining, fast paced, and effective at creating a huge cast of horror icons from Slappy to the Monster Blood. As an adult, I've also found myself making connections that revealed deeper emotional stories present behind all the silliness. Perhaps most exemplified in The Ghost Next Door, featuring a girl who doesn't know she has been dead for the past five years, not yet moved on from this world. Good, chilling stuff.

The TV series, on the other hand, holds up considerably worse, being far more an obvious product of its time than the books it's based off of. Such episodes like The Haunted Mask or Stay Out of the Basement (two that are considered some of the best the show had to offer), while still tense, are campy to the point of parody. Now I love me some camp, but only in the case where it can still keep your attention. But upon further inspection, I can't say I didn't struggle a bit getting through plots that stretched out over two episodes each. For the nostalgia factor, I still enjoyed being able to quote line after line after all these years. It more or less seems like pretty decent TV, until you start getting into the rest of what the show has to offer. I may just be far too emotionally removed from Goosebumps: The Series after all this time, but the appeal has been mostly lost on me. Whether intentional or not, I did at least find a majority of the episodes I got through to be pretty hilarious, with particular mention going to Welcome to Dead House and its ending sequence.

To cap off this Goosebumps month, we also ended up checking out the 2015 live action Goosebumps film. I had next to no expectation going into this, but you know what? I actually kind of enjoyed it. It feels absolutely nothing like Goosebumps, despite featuring tons of characters from the books. But it's a mostly visually awesome film with competent performances and some memorable moments. (like the supermarket werewolf scene) Also, I don't know what the fuck Jack Black is trying to do with his accent, but it's so inconsistent that it ends up being kind of charming in the end. A decent movie that's supposed to be getting a sequel later this year. Granted, something i'll probably take another three years to see, but eh. 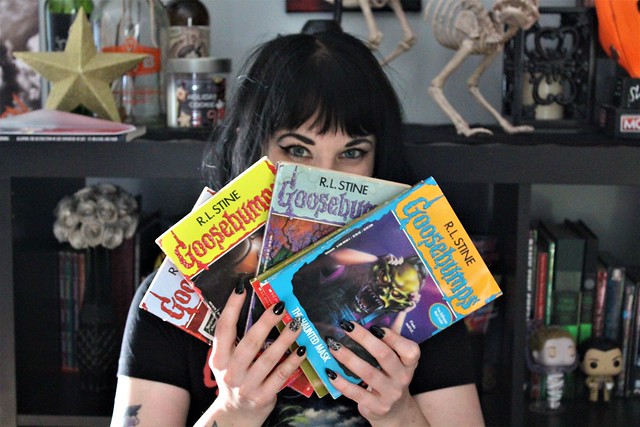 Sara: Um, not sure what Jeremy's plans are for October 12th of this year, but I know my ass will be sitting in a movie theater watching Goosebumps Haunted Halloween. I am honestly pretty mad at myself for waiting so long to see the first Goosebumps movie, it is incredibly cheesy, but it is surprisingly pretty cute, and I'll dare say creative with including as many of the horrors from both the 90's and 2000's book series.

Revisiting the books as an adult is just nostalgia, pure and simple.These used to take me 3-4 hours to read, now I knock them out on my lunch breaks. Quick little stories that take you back to childhood, almost horror versions of comic books. I haven't made my way through all of them just yet, but a surprising number of them actually hold up. The Werewolf of Fever Swamp, The Haunted Mask, and Night of the Living Dummy are all still solid. Why I am Afraid of Bees can still go fuck itself.

The TV series on the other hand... well, lets put it this way: I am a HUGE fan of Buffy the Vampire Slayer, and the special effects of that show are a cheese fest, Goosebumps doesn't stand a chance. However, if you want something to throw on Netflix in lieu of Saturday morning cartoons, Goosebumps is a great filler. Also, did we mention nostalgia?

May didn't go quite as planned for this Coven, however, we are totally prepared for you creeps for June! We will fill you in on June's theme in the next post, but in the meantime we will give you a sneak peak of what to look forward to with our next #BHorrorMovieNight live-tweet scheduled for this Friday, June 1st. We will be watching the classic Dead Alive (1992)! Follow along on twitter, use the hashtag, and be ready at 9:30 EST. Dead Alive is available free to watch on YouTube, so see you then, creeps!