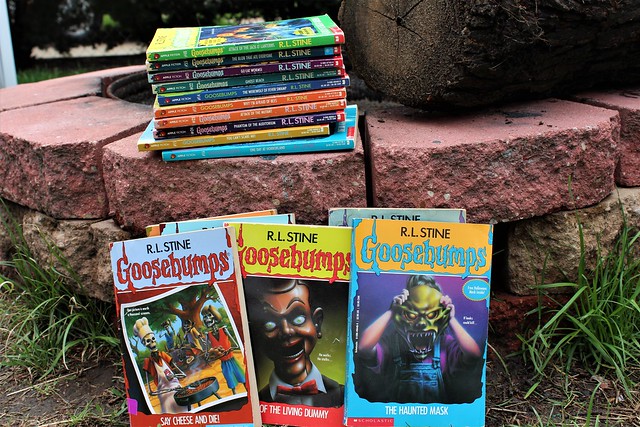 Jeremy: Goosebumps were the first series of books I ever read. During the five year run of the original 62 books, I was granted my first exposure to the horror genre. Before any horror movie, before Stephen King or Mary Shelly or even Scary Stories to Tell in the Dark, there was R.L. Stine and Goosebumps. I loved them, even at a time when I could already tell they weren't exactly top notch literature (nearly all of them ending on some half baked idea for a cliffhanger). No, what I loved was the entertainment value, they could be hilarious, they could be surprisingly sad, and for my adolescent mind, even frightening at times. And those iconic covers? I didn't know a single kid who, once they collected a couple, didn't want the entire series for their own. In addition, there was another series known as Give Yourself Goosebumps, which were a collection of choose your own adventure books.

Generally, I didn't really get into these, I just thought the holographic covers were cool. I was also completely trash at them and wound up dying or being turned into liquid shit five minutes into reading, so maybe i'm just a salty bitch? I was far more interested anyway in the TV adaptions that were airing at the time. With just as much cheese as the books they were adapted from, Goosebumps the TV series was a stable of Saturday mornings at my house for several years. We even went on to own two of the episodes on VHS, Stay Out of the Basement and my favorite, The Haunted Mask. Speaking on the latter, if there ever was an episode of Goosebumps that could be considered scary for a kid, The Haunted Mask was it. I remember being un-phased by the rest of the show, but the thought of a mask permanently merging with your own skin? Get that shit away from my younger self. Even then, I still loved it and continued to watch that tape into the ground. Some other favorites included Night of the Living Dummy II, Werewolf of Fever Swamp, and, featuring a young Ryan Gosling: Say Cheese and Die. It's not coincidence either that these also happened to be some of my favorite of the books, in addition to Welcome to Dead House and Attack of the Jack-O-Lanterns.

It took many years, but before the end of the 90's, many bookstores and Scholastic fairs later, my brother and I completed the original collection just as the next series, Goosebumps: Series 2000 was coming out. This was where I started to fall off, just as I would start to make the jump into more frightening content. But in a moment reminiscent of how I am today, my final stint with these books, before the turn of the millennium, would be to re-read all 62 one summer and by the end, rank every single one of them bitches. I couldn't tell you now where any of them ranked up, but I can at least recall that My Hairiest Adventure, Chicken Chicken, and How I Learned to Fly can all go fuck themselves. And I stand by that sentiment till the end. 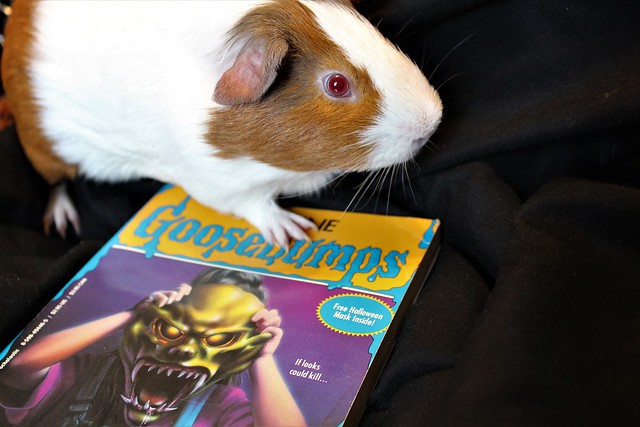 Sara: I want to say that my first Goosebumps book was Stay Out of the Basement, but that might have just been the first one that my great-grandmother bought for me. I started reading at the age of four, and actually started school a year early because of it. My parents had hopes of a genius gene, when instead they ended up with an anti-social little shit who preferred reading in her room instead of playing with friends on hot summer days. The Goosebumps books only encouraged this, however, I became an easy kid to shop for in the 90's. I wore my Curly -the Goosebumps version of the Crypt Keeper from Tales From the Crypt- glow-in-the dark t-shirt until it was practically a rag. I even had the coveted Goosebumps: Shrieks and Spiders Game, I really, really loved Goosebumps.

When the TV show started up in the mid-nineties, I was in heaven. I had always thought of the books as almost comic books, I guess a kid's version of Creep Show, if you will. I will be honest, the only two I remember disliking were Why I Am Afraid Of Bees, and the Monster Blood ones. By the time the newer series came along, puberty came along and I moved onto X-Files, and Buffy the Vampire Slayer. When I sold my collection in a garage sale at the age of 14, my father told me that I would regret it. He was right. However, it has been fun hunting them all down in thrift shops and resale book stores around the Detroit area.

We apologize for our absence recently as we were supposed to have this post up for you on Monday, as we were also supposed to be in Arizona right now. Unfortunately, Jeremy had to have emergency surgery to have his appendix removed, so our trip has been postponed until later on this year. Womp, womp. In the meantime, what are your thoughts on Goosebumps? Favorite books or episodes? Drop us a comment here or on Facebook, or send us a tweet @FoxyCatCoven