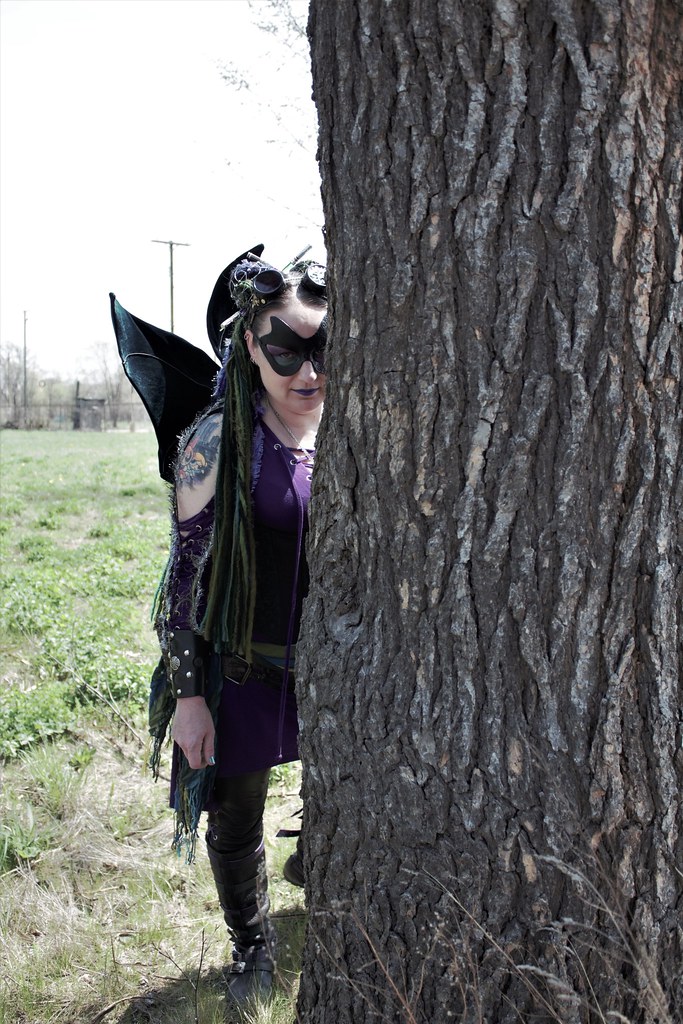 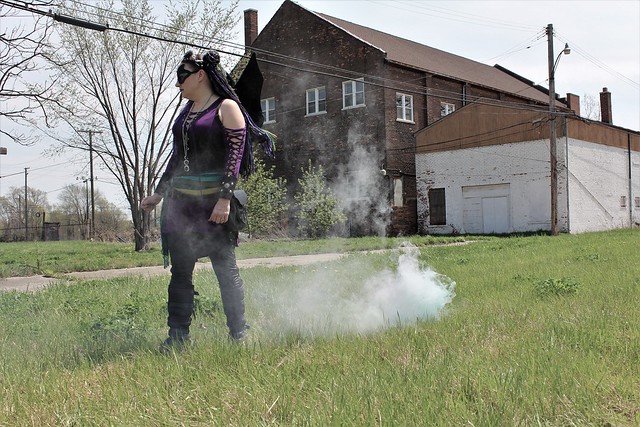 On the corner of St. Aubin and Mack in Detroit, MI lies an empty field among a mix of eclectic occupied homes, abandoned buildings, a recycling center, and on occasion, a headless man. A field where the overgrowth of nature in an urban setting creates the perfect background for a dark fairy photo-shoot, also housed a place used for the practice of a very cult-like religion, as well as brutal murder.

St. Aubin Street Massacre: 1929 Detroit family murders still unsolved
July 3, 1929: Family of 6 murdered with axe in Detroit home
There is no doubt that underneath the community gardens, the few condominiums, and the small industrial area, St. Aubin is a bit haunting. We first explored this area of Detroit on this blog by introducing The Abandoned Halls of St. Albertus School, which I thought of as creepy enough on its own, however, I thought the history of the area would be a perfect combination in capturing the essence of my dark faerie friend, Dani. My original plan was to add a touch of whimsicalness to this blog dedicated to all things spooky, little did I know that with a bit of internet browsing I would uncover an 89 year old unsolved mystery, as well as reports of a haunting. 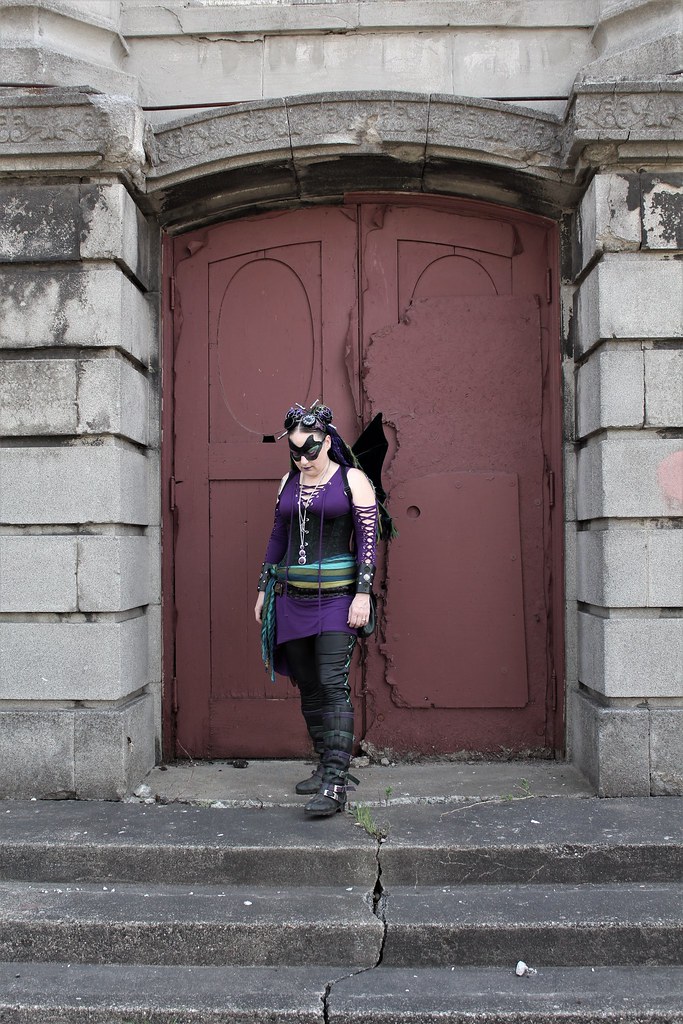 In 1904, nineteen-year old Benjamino Evangelista immigrated to the United States in search of a better life. He changed his name to Benny Evangelist and began to make a name for himself in real estate and contracting. Two years later, he began to claim that he was receiving visions from god. In his home on the corner of St. Aubin and Mack, he deemed himself a mystic healer and leader of his own cult, charging $10 per “reading” using unorthodox methods to
heal both the mentally and physically challenged.

Evaneglista's methods ranged from religion, to black magic, to prescribing herbal medicine. He published a four-volume "bible" he called "The Oldest History of the World: Discovered by Occult Science," self-describing himself as a prophet. In his basement, he constructed a spiritual sanctuary consisting of wax dolls and odd figures hung by wires from the ceiling depicting "celestial planets." The basement served as the "church" for Evangelists's sermons.
On July 3rd. 1929, in the middle of the night, Benjamin Evangelist and his entire family, were murdered. His wife and children were killed with an axe in their sleep, while Evangelist was found decapitated, sitting at his desk, with his severed head at his feet.
Though there were suspects, they were never charged with the murders and to this day, the case remains cold. Although there have been reports of a headless man, as well as disembodied voices and screams on the land where the family once lived. 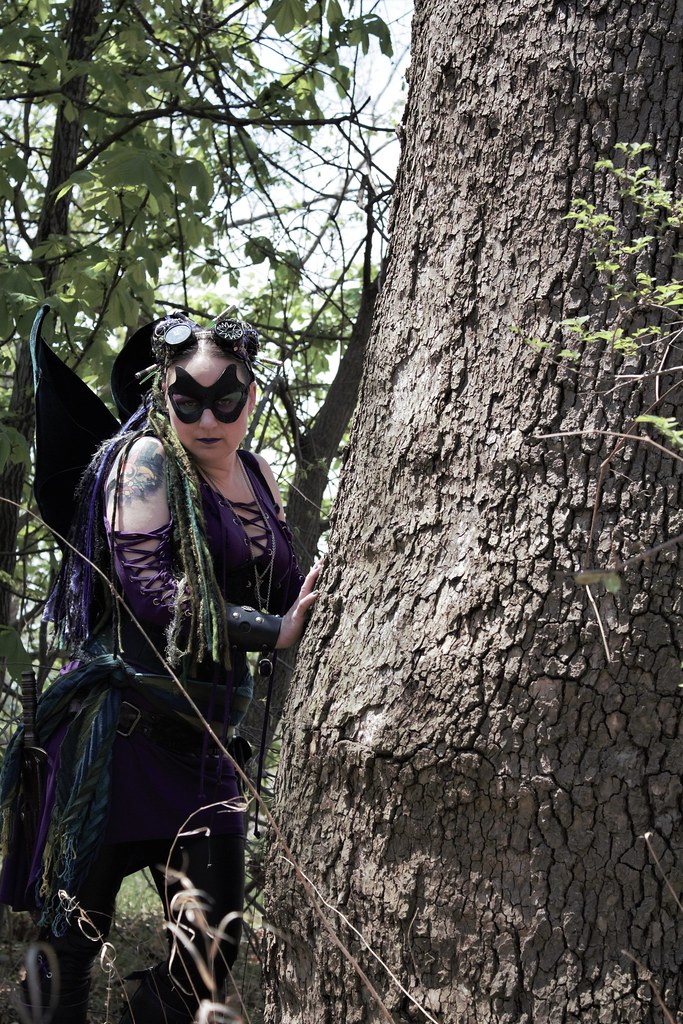 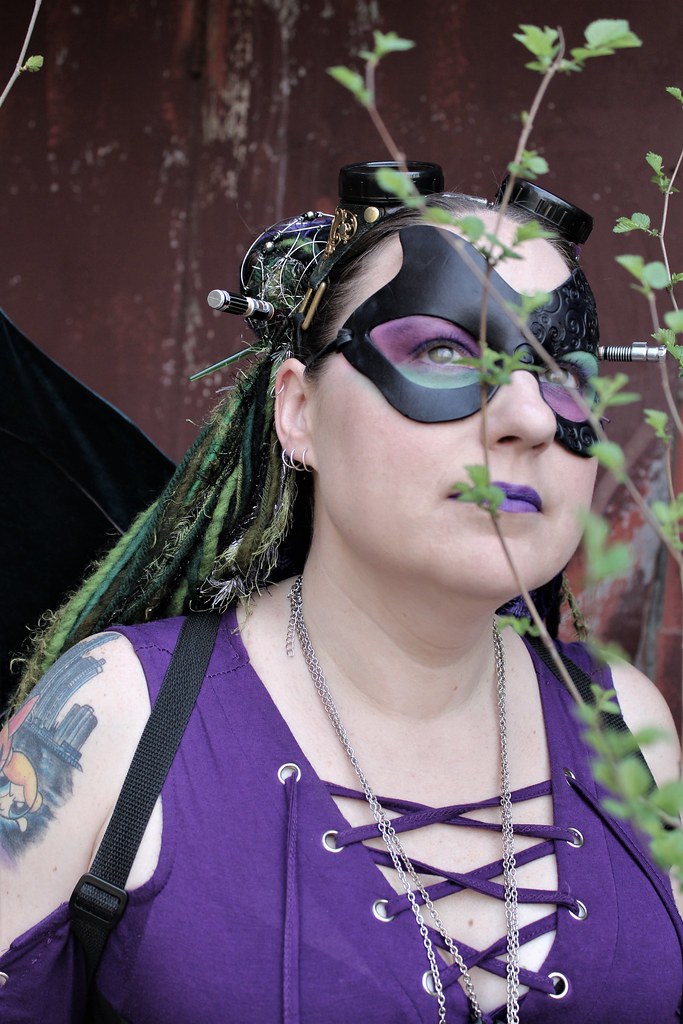 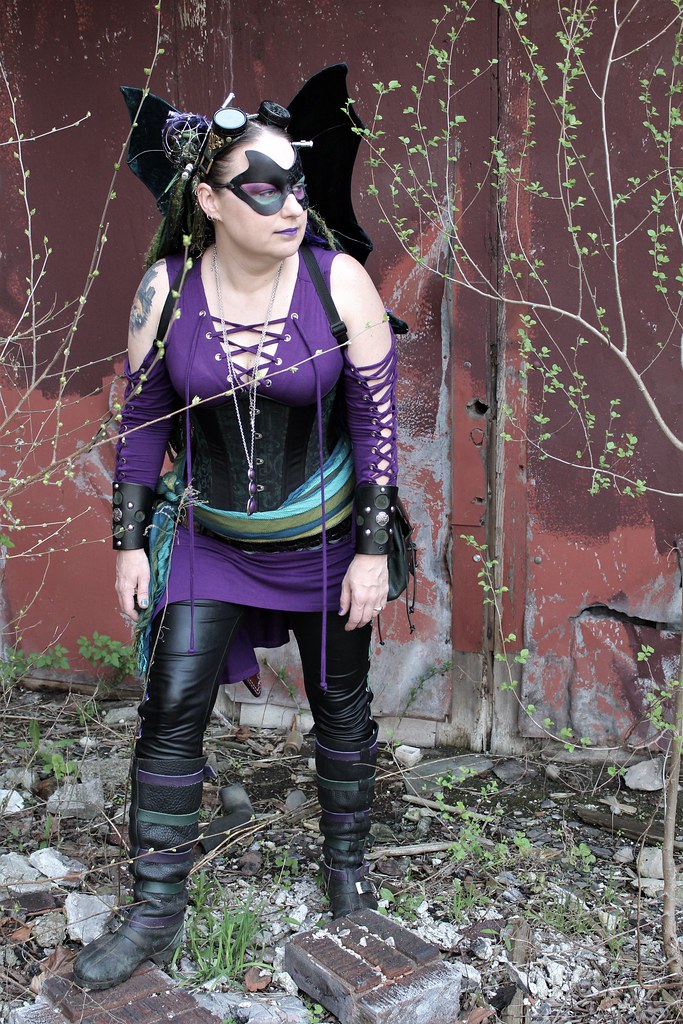 During my research, I stumbled upon an independent film; The Ghost of Saint Aubin, which is based on the events of not only the St. Aubin Massacre of 1929, but an additional one that took place in 1990. What started out as a robbery, ended with six people murdered, and the film ties both accounts together in a pretty creative way, adding a bit of supernatural elements in. The entire movie was shot in Detroit, and although the acting was a bit forced at times, the concept was pretty good. It's available on Amazon Prime at the moment and I would recommend going that route because the last eight minutes are missing from the YouTube version (I may or may not have watched this film today at work. Hey, at least I can say I was invested enough to track it down to watch the ending). 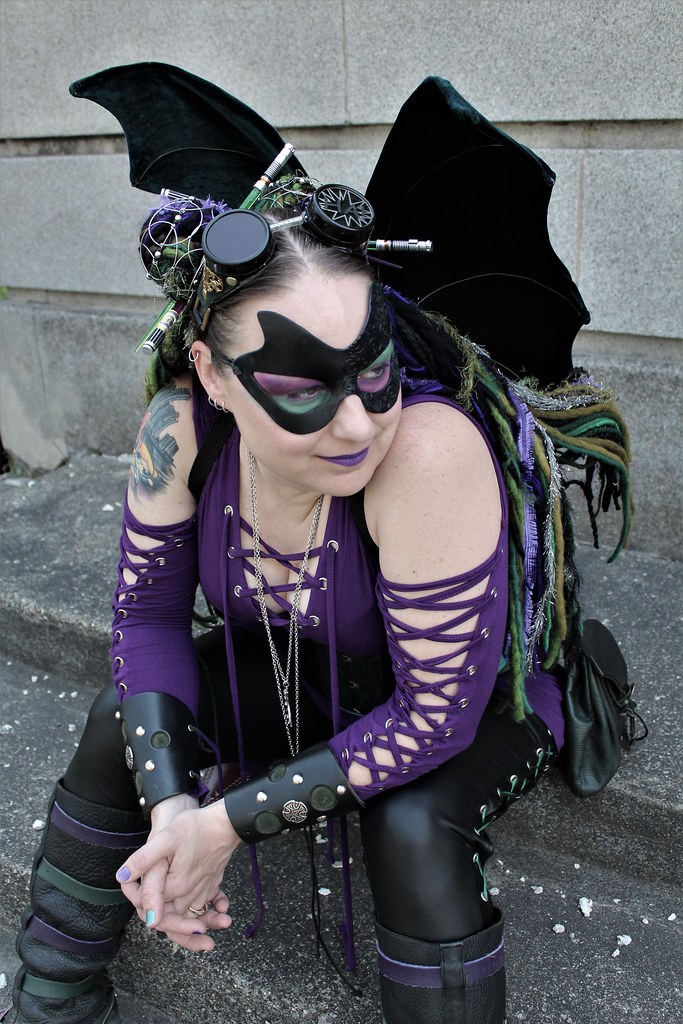 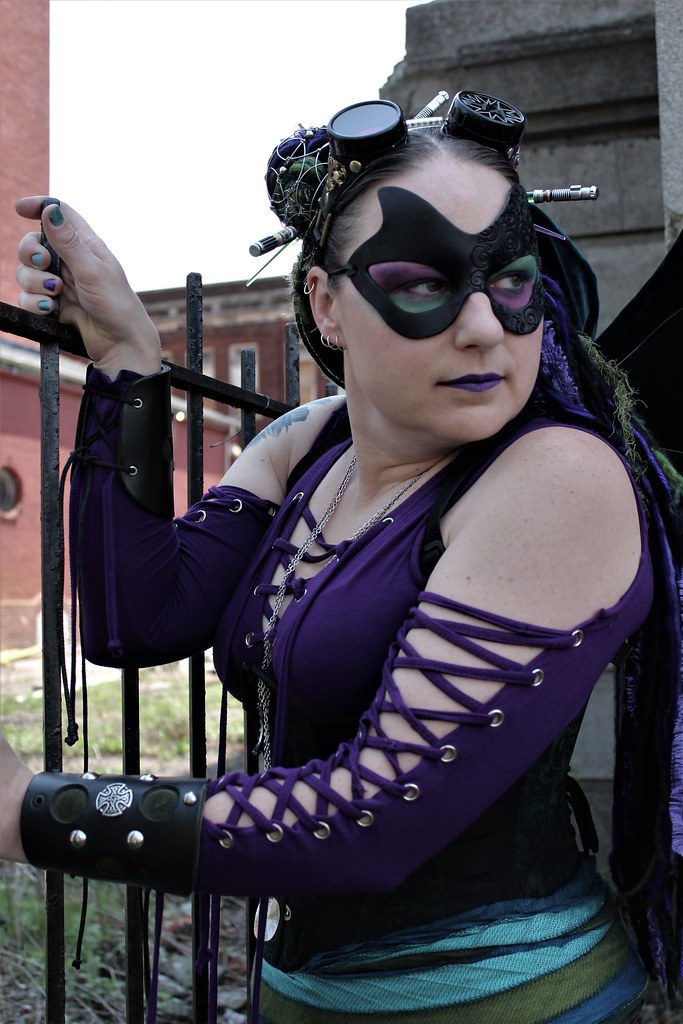 I have worked a mile away from where the 1929 St. Aubin Massacre occurred for several years, I have walked across the grassy plot on my lunch breaks where Benjamin Evangelist's house once stood, never knowing what had happened there almost 90 years ago. Will I ever see this headless man who haunts the corner where the beginning of this photo-shoot took place? I don't know. I do know however, that there are several other places in the Detroit area that are rumored to be haunted, and we fully expect to explore and document them for this blog. 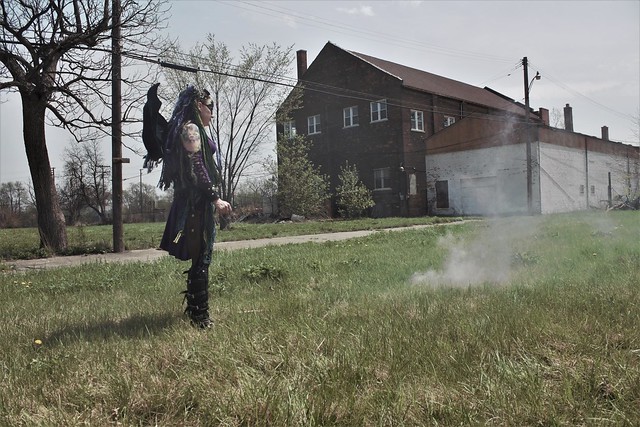 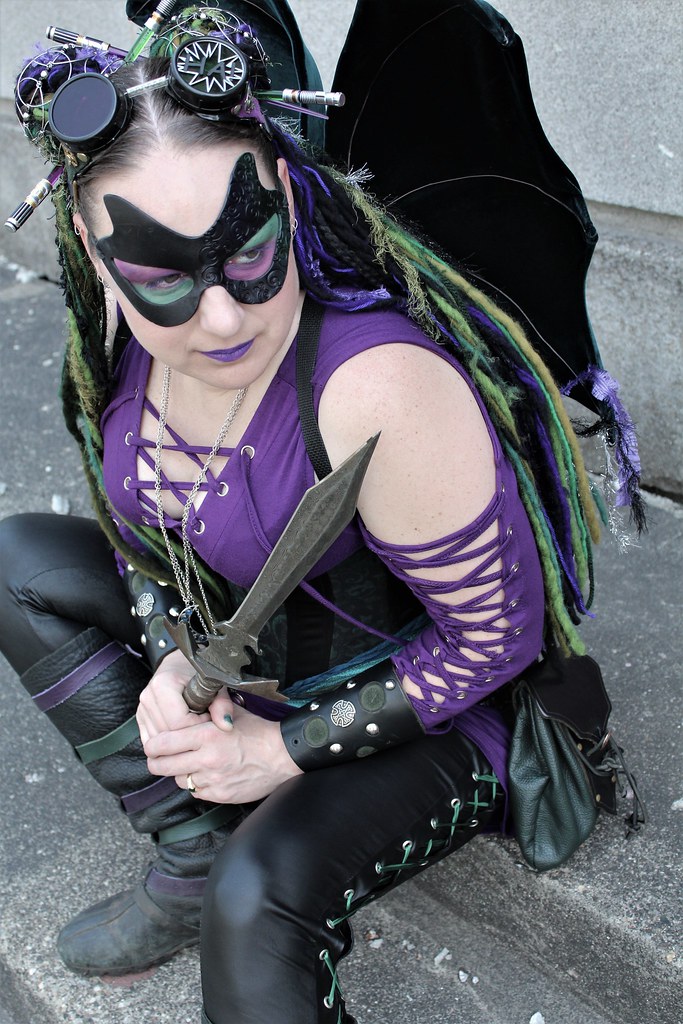 As you guys know from our post earlier this month, it is Goosebumps month here at the coven! We are going to have our first Goosebumps segment as our next post before we head out to Arizona, so look for that over the weekend. We will also have a few posts going up while we are out of town, so be sure to stay posted. In the meantime, you can follow us on all forms of social media: Facebook, Twitter, and Instagram, as well as join our Coven Creeps group, located right on our Facebook page-just send us a request to join, and we will add you in! As always, keep it creepy, kids.