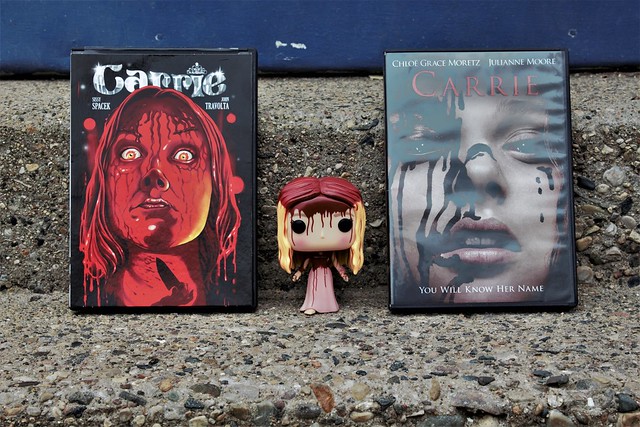 Jeremy: And here we are with yet another vs. series blog post that is most definitely not a fair fight. While i'd seen the original Carrie film many times before, i'd purposefully avoided the 2013 remake up until now for the sake of fairness in writing this post. For what felt like all of 2013, I remember the trailer for Carrie 2013 being shoved down my throat at nearly every commercial, theater preview, and YouTube ad that came my way. That alone was enough to convince me to avoid the film. Maybe I was beginning to feel detached from relating with modern high school drama? Maybe I thoroughly disliked the choices in casting? Whatever it may have been, I designated it as something I just didn't need to see. A little unfair, but this post sought to remedy that. A look at how an early 1970's Stephen King novel translates for a generation nearly 40 years later.

Long story short, it was far too easy to dislike the 2013 version. Really, i'm not even a huge fan of Carrie in any of its incarnations. I can certainly recognize though that the 1976 film, if rather dated, is still a fantastic piece of cinema. It's dream-like approach to story telling always left me feeling as though something was constantly off with this world, perhaps as though it could all be happening in someones head. And though they weren't what I imagined after reading the novel, the roles of Carrie (Sissy Spacek) and her mother, Margaret (Piper Laurie) perfectly capture what any future remake/sequel/etc. should be judged upon. Fantastic at turning batshit nuts on a dime. Carrie 2013 attempts to match up to these performances in a similar way, and falls flat in comparison. Although Julianne Moore succeeds much greater in her portrayal, her playing it straight approach doesn't really add anything new to the character. It really just made her less imposing and frightening. Chloe Grace Moretz on the other hand.... 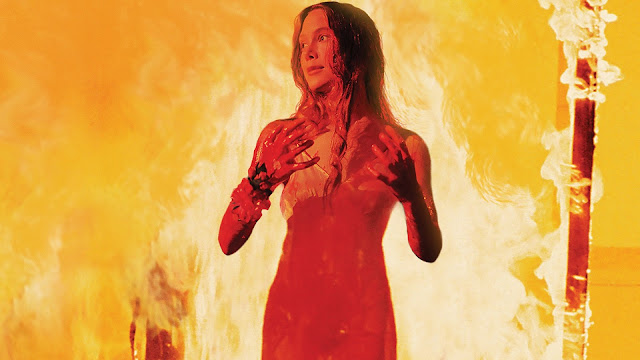 Well, the less can be said the better. The accent is bad, the script attempting to make her more assertive to her mom and hip with the times is jarring, and by the time she's all bloodied up and ready to fuck shit up? She goes into cringy full super villain mode, complete with dramatic hand gestures and awkward faces great for pausing your DVD/Blu Ray on. A far cry from Spacek's subdued but deadly rampage at the end of Carrie 1976. In the case of the rest of the cast of characters - Where as Carrie 1976 even had minor characters with some memorable trait (such as the guy who wore the tuxedo shirt to prom), Carrie 2013 is packed full of people i'm struggling to remember what made them stand out from anyone else. To 2013's credit, I did enjoy Judy Greer's performance as the girls coach, maybe even just as much as the original portrayal. So I guess the film has that going for it.

While not quite as bad in comparison to something like the A Nightmare on Elm Street remake, Carrie 2013 is by far the inferior film to its original counterpart. It's attempt to modernize this story, while valiant, completely misses the mark and seems to only be interested in ripping off its inspiration. As a film it's serviceable, the story itself is a good one, there's a few decent moments here, some good cast choices, but as a remake of a classic King film, it was worth seeing only to appreciate what came before, and what could maybe be improved upon in the future.

Sara: I feel fully confident in stating that I am the only person in existence who actually liked the 2013 version of Carrie. There, I said it. I saw the original 1976 when I was probably ten years old at a friend's house and if worrying about getting your first period wasn't enough on it's own, I was traumatized after seeing this movie. Don't get me started on the obsessive religious mother, if I disliked going to church before, I completely loathed the idea after (still do, but that's for another post). Until the Blair Witch Project, Scream, I Know What You Did Last Summer, and Urban Legends dominated our VCRs, Carrie was a staple during sleepover nights.

I will admit there were some obvious flaws with the 2013 remake: the biggest being the big, pig-blood dumping scene. It needed to just happen, not for us to see it three times, from three different angles. Yes, I fully support the idea of tweaking the most iconic scene of the movie to make it different, but it was too much. I will agree with Jeremy on Carrie's demeanor during the attack of the prom scene, Sissy Spacek's stiff stance makes for a jarring juxtaposition to the choas surrounding her, creating an unnaturalness that really hones in on the terror of telekinesis as a weapon. Chloe Grace Moretz hunched spine combined with crazy-eyes, and squared off hands comes off as far more aggressive than need be. We as an audience know its Carrie causing all of the havoc, we don't need it completely spelled out for us.

There were some aspects that I did really like from the remake as opposed to the original: We find out in the 1976 version that Carrie's mother admits that she should have killed Carrie when she was born, but actually seeing Julianne Moore holding a giant pair of scissors over her newborn baby daughter's body is completely shocking. We know she doesn't do it, or else, there would be no movie, doesn't make the scene any less disturbing. The 2013 remake gives us a little more back story on Carrie's classmate Sue, which kind of helps the audience build more of an understanding on why she would give up her prom date for Carrie. I feel like in the original, it kind of just happens, and most of the side characters are just simply one-dimensional. Because of this, a decent chunk of the remake feels like you are watching any high school teen movie, you almost forget that everything is going to end in fire and bloodshed. Have to still give mad props to John Travolta though, he at least looks a bit closer to being a teenager as opposed to when he was in Grease.

In the end, the biggest flaw of Carrie 2013 is that despite a bit of character development, and a few added scenes, it is essentially the same fucking movie. If you are going to remake a movie, there needs to be something, some new angle, some backstory, anything, to make it worthwhile for the audience to see, especially for horror fans who have seen the original a million times over. I honestly wish that I had read the book at this point, so that I could compare these both to the novel, but that too will have to wait for another post. The 2013 does succeed in modernizing the story enough to perhaps get viewers who are not necessarily die-hard horror fans to watch, I would argue that. Do I think it deserves to get trashed on just because it isn't the original? No, I think it wasn't a completely terrible movie, you guys (*cough* Jeremy*cough*) are just mean. If anything, Judy Greer alone is a bit of s scene-stealer. Either way, May is prom season, and every year at around this time I love watching this film, and I think I will always really like both versions.

Anyways, we are finally all back to work and on the mend. Many thanks to all of you well-wishers on Jeremy's surgery, we appreciate it! We will back back later this week with another new post and a new #BHorrorMovieNight live-tweet scheduled for you guys. In the meantime, keep it creepy, kids!
Media Massacres