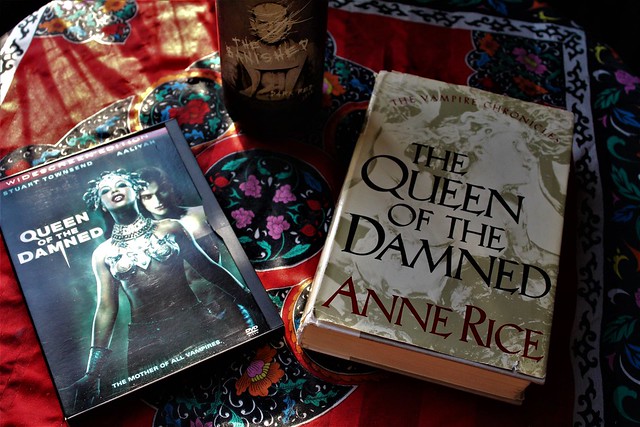 *This post contains spoilers for the 2002 film, Queen of the Damned

Jeremy: After the tragedy that was the original Prom Night, a generally agreed upon "bad film", the past few entries in our B Horror series, despite heavy critical panning, I can't say have earned the hate they've acquired over the years. Gothika may have been cliched as all hell, and Halloween III was certainly not without its campy, incomprehensible plot, but generally speaking, I could appreciate something about these films that make them worth revisiting. Does this trend continue then with the film adaption of Anne Rice's Queen of the Damned? In some ways, and yet it easily is the most flawed of the past three B Horror Nights.

Sara can vouch for the fact that i'm not an expert on Anne Rice, hell i'm not even a rookie. I've not read a single page of anything she has ever written, and i've only seen Interview with the Vampire once. As for that film, it was alright I guess, Tom Cruise freaked me out a bit. And so, despite doing a bit of research into the troubled production of Queen of the Damned (and it's numerous disparities in the transition from book to film), I still am not the most qualified to give what an Anne Rice fan would expect from a commentary on this film. Think of my perspective as one of an outsider.

Even more so than Gothika, Queen of the Damned looks like it could only have been released in 2002. For it's style and choice in music (a dominant feature of the film) alone, it represents a single moment in time when Creed, Disturbed, and Lincoln Park dominated the charts and low rise jeans were the shit. In fact, the film often feels like a made for MTV music video, and is in complete contrast to it's predecessor, the more subdued Interview. If not for the fact that nearly every performance here can be likened to off-brand spaghetti-o's, QOTD might have been a little more enveloping. This movie simply moves far too quickly through each plot point for me to give a shit. It was entertaining, however, hearing each actor accept to pull of accents that were clearly not their own.

I can only imagine that there were a huge number of vital details cut from the film in order to create the tone the filmakers were going for, but it's all really just a disservice in the end. I have no idea how this is supposed to be a sequel, and feel as though going back to the original won't answer that question. Someday I will tackle this film's novel, despite my confidence that my disappointment will only continue to grow exponentially.  As it stands, and I know i've been trashing it this whole article, but I didn't hate the film and it was decent enough to warrant at least another viewing. Maybe there's something i'll find in it I can appreciate more. Anyway, it was definitely better than Prom Night for what that's worth. 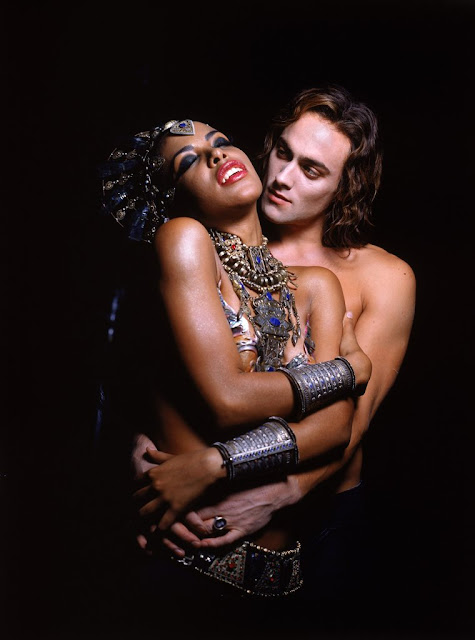 Sara: I have no idea what Jeremy is talking about, this movie is GOLD. Okay, okay, it has a fuckload of flaws. As a HUGE Anne Rice fan, this movie does not only alter the novel, but cuts out chunks of the story, even all of the internal dialogue wasn't enough to really give the viewer the full effect that Anne Rice is able to do, but when has any film adaptation ever been up to par? I think the low ratings (5.3/10 on IMDb, 17 % on Rotten Tomatoes), are mostly due to the fact that this movie is still technically a sequel to Interview With A Vampire, though it is easily a stand-alone film. Maybe fans were expecting the gritty, yet romanticism that was there in 1994. If Peter Jackson had gotten his greedy hands on this film, it would have been dragged out into three movies, perhaps actually sticking closer to the story and covering more, but then we wouldn't have what this 2002 gem gave us, a sexy vampire goth movie.

The cast, mostly fresh-faced at the time, was a perfect choice. Only now, a lazy Whovian, did I recognize the 8th Doctor from Doctor Who, Paul McGann as David Talbot. At the time this movie was released however, the only person's face I knew was Aaliyah, and she was a PERFECT Akasha, because QUEEN. Seriously, just looking at her, she is the epitome of gorgeous, she has great fluidity to her walk as she graced the screen. Her acting was phenomenal, however tainted because some idiot decided to do some weird dubbing thing with her voice in most of the scenes, which just ended up being distracting. That and she didn't have enough screen time, in my opinion, there needed to be more build-up with the romance and conflict of Lestat. Stuart Townsend had a cute/creepy enough look to him to pass as a vampire, but I was indifferent to his Lestat. I honestly wasn't impressed by Tom Cruise's either, I think I just have a hard time picturing any actor as Lestat. Maybe the new series will bring forth a Lestat worthy of my pickiness? My only legitimate complaint was having Jonathan Davis be the primary singing voice for Lestat, only to have it randomly switched to Marilyn Manson for one song, like no one would notice. That little mishap aside, they created a deliciously sexy band. The band, The Vampire Lestat, looked and sounded like all of the bands my parents would never let me listen to in high school, and the soundtrack featuring Static X, Disturbed, and Kidney Thieves only proved it.

I think the fact that this movie is pure early 2000's (you know, the era almost every one of my #BHorrorMovieNight choices seem to be from) is why I love it so much. It looks like 2002 Hot Topic threw up all over it, and I wanted all of the casts's wardrobe. The Vampire club Jesse bravely enters alone in search of Lestat, I wanted to hangout in. I read the Vampire Chronicles (the ones that were already written at that point) in the early 2000's, so seeing Pandora, Maharet, and Khayman on screen was completely exciting for me, because to me they looked exactly as how I wanted them to look.

In the end, do I wish that there was a more closer to the actual novel version of this movie out there? Sure. With the new series still being discussed, I have high hopes. It better be gay as all hell (another thing lacking from Queen if the Damned), but I will always love this faster, sexier, slightly trashy-in a delectable way- film adaptation of this novel. If you haven't seen it yet, well, we just spoiled the living shit out of it, but it's on Netflix right now so go watch it and drop us a comment, send us a tweet and tell us what you think! In the meantime, keep it creepy, kids.