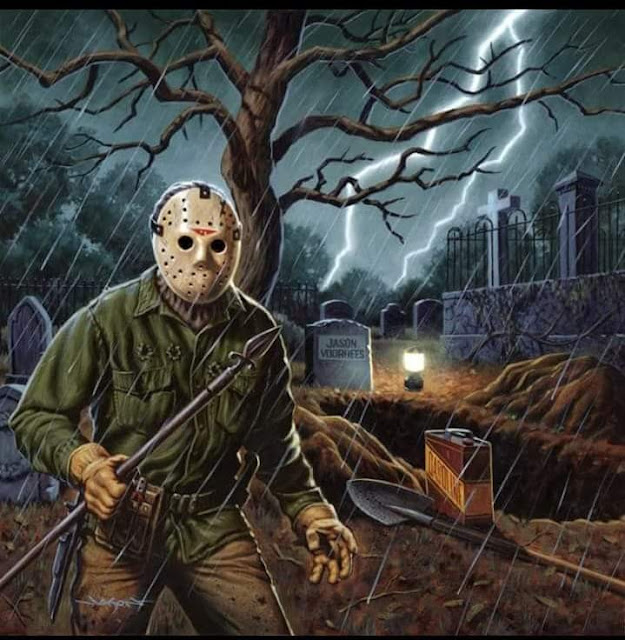 Jeremy: Generally speaking, when someone asks me, "so what's your favorite Friday the 13th movie?" I've found no difficulty in directing them to Jason Voorhee's sixth chapter, Jason Lives. While not  an entirely original choice, a majority of the horror community would agree, my choice stems from the simple belief that this is the most entertaining and re-watchable Friday the 13th yet to be released. What i'd like to focus on for today's Friday the 13th special is why this film is so loved, and it's impact on the future of the series.

Part VI features the Jason that we now know, the undead slasher. It was the first film in the series to establish that Jason could no longer die (at least not by conventional means). While he may have been extremely tolerant to pain in Parts 2-4, he still reacted to it, and couldn't brush off an axe to the hockey mask with ease as he would in his later days. This was still at a time where the filmmakers, Steve Miner (2 and 3) and Joseph Zito (4), were trying to establish Jason as a frightening character, not yet set on just going through the killin' motions. With the conclusion of the fourth film, Friday the 13th: The Final Chapter, Jason was legitimately killed off by a young Corey Feldman (aka Tommy Jarvis) after suffering significant abuse throughout his bloody killing spree. These three films, in addition to the original with Jason's mother as the killer, are often considered some of the best entry's in the series. It's not uncommon for most people to say their favorite film shuffles between these four. That used to go for me even, the Final Chapter was my ultimate Friday the 13th film for the longest time. Before I could appreciate the rest of the franchise, I really believed The Final Chapter should have stayed the final chapter.

But as money would have it, Friday the 13th would return again only one year after being proclaimed dead. In 1985 Friday the 13th Part V: A New Beginning, perhaps one of the worst films in the whole damn series, was released. It had a hockey mask killer, it had some people getting slaughtered in creative ways, but the real Jason Voorhees was no where to be found. Instead, we are treated to an impostor going about continuing the killings of the hockey-masked slasher, over some half baked motive. For all the hate directed at the fact that Jason isn't in this one, I don't actually mind that fact all that much. It could still have been an interesting take on the whole psychological horror approach it goes for, especially with the mental deterioration of Tommy Jarvis. But the entire affair ends up falling flat under its own plot, weak kills, sleazy characters, and an awful killer reveal. Thankfully only one year later, Jason would live again.

After the negative backlash of A New Beginning, Jason Lives was released as a return to the franchise roots but with a twist, Part VI is actually a very funny film. And not Freddy's Dead "funny" in which no one was laughing and Freddy was no longer what he once was. This is a undead Jason, returned and better than ever. With this being his first film as an undead killer, there are plenty of scenes where his potential to get fucked up is brushed off as he easily dispatches every character he comes across, up until the final showdown with an adult Tommy Jarvis. Part VI has elements of comedy, an action movie, and a Friday the 13th film all rolled in to one to create a perfect combination, where one aspect doesn't eclipse another. Add to that a kickass Jason design, my favorite of any. That's no disrespect, of course, to fan favorite Kane Hodder, who would portray Jason from Part VII to Jason X, while contributing motion capture to Friday the 13th: The Game. In my mind his is the true Jason, even then i'll still always prefer the utility belt and glove wearing Jason of Part VI.

Jason Lives features a "better than normal for a Friday the 13th" script with a ton of in-joke references to not just other horror movies, but even James Bond of all things. It was Wes Craven's New Nightmare and Scream years before they were conceived. Something that stands out for this entry as well, after the nudity heavy New Beginning, is that there is no nudity to be found in this film. Perhaps disappointing to those who come for both the violence and the sex, but takes nothing from the overall package. The actors performances here are dedicated and spot on, far surpassing any of the previous films of the series. And while it may not feature the most gory kills, Part VI has some of my favorite including the paintball scene, the american express scene, and the death of the town sheriff.

The Friday the 13th series has produced six additional films after Part VI as of writing. Jason would remain undead, and the series formula, however tweaked it got, would essentially follow the same pattern from here until 2009's remake. Jason Lives dedication to quality film making with characters you care about and a Jason you root for, was more than audiences could have expected at the time. But history has left it at the top of the bunch for me, and for those who share this sentiment, and can resonate with the care that was put into a film that may have saved Friday the 13th from fading away entirely, I think you can understand why. For nearly every film in the series I can see and feel for the argument that maybe your particular choice is the best one out there. They all have something that set them apart, makes them unique. As for me, i'll take Friday the 13th Part VI: Jason Lives every time.
Media Massacres