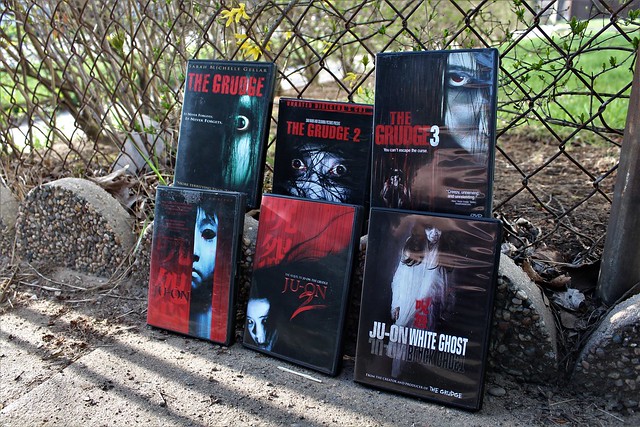 "It is said in Japan that when a person dies in extreme sorrow or rage, the emotion remains, becoming a stain upon that place. Death becomes a part of that place, killing everything it touches. Once you have become apart of it, it will never let you go."

At the beginning of this month, we touched upon the interesting, if a little confusing at times, timeline of the Ju-On and Grudge films (Japanese and American versions, respectively). After spending the past several weeks re-watching the first five Ju-On films, as well as The Grudge trilogy, i'd like to touch upon both my feelings before and after I revisited one of my favorite horror franchises. But first, I have to go back to my early experience with J-Horror. That story begins with my first viewing of the American remake of The Ring.

Back in 2002 (it already makes me ancient referring to that year as such a distant memory), the American market was introduced to one of the first widely successful remakes of a Japanese horror film with The Ring. I was 14 at the time, just starting to face down my fear of even the most mainstream horror films (I was a late bloomer, even if I was subjected to many horror films already, to my dismay), and for, I swear, that entire year I was constantly treated to all kinds of variations of that iconic "7 days...." quote. At least in my circle of friends, that film was a big deal, being treated as one the scariest movies they'd seen in years, maybe ever. It was for that reason, and my own drive at the time to face my fears by going right for the scariest that could be offered to me, that I chose to venture out to see The Ring.

I had no idea this was a remake, really I was completely oblivious to any Japanese horror film. But I gave it a go, and you know what? It wasn't so bad. That damn video tape may have given me some vivid nightmare material, but otherwise I just thought it was a great piece of spookshow magic. Of course, by telling this to the people who were initially frightened by it, they went on to proclaim that if I had seen the Japanese version (Ringu), I REALLY would have had the shit scared right out of me. I believed them, maybe because it was a horror market I wasn't ready to already try and understand, but it worked well enough that I steered clear for years as others would continue to resonate with Ringu (and Japanese horror films by extension) being some mystical force of horror. Two years past, and another successful J-Horror remake arrived in the form of The Grudge (2004). Now I really was ready to get scared.

Two years would be kind to my horror tastes, and I was hardly the same by the time I saw The Grudge. And yet, it still affected me more so than The Ring. More than anything, the premise just seemed far more substantial and creepy than a cursed video tape killing people, especially as VHS was already making it's way out. I didn't immediately fall in love with the film though, that would come with time, and so I never gave it's two sequels a chance when they were released. As with The Ring, word was again going around about the inspiration for The Grudge, the Ju-On series. These films were being talked about as even more frightening than its Ring counterpart, and I would again fall victim to avoiding them like the plague. In the end, it took me nearly ten years before I finally braved the Japanese horror scene, and it would start with Ringu.

I can't comment much on the Ringu/Rasen/The Ring series (especially not in a Ju-On post), but I can say that watching Ringu for the first time made me feel as though I would have been ready all those years before. I just don't find it to be as scary as everyone was making it out to be, even in comparison to its remake. In fact, I even found the remake to be a more interesting film on all fronts, especially visually speaking. After the fact, I made the decision to skip over any other Ring films, and give Ju-On a go, but not with any of the original films. The first Ju-On film I ever watched was Ju-On: White Ghost/Black Ghost, and it scared the fuck out of me.

Maybe it was that I went in completely unprepared at 3am on a Netflix binge, but WG/BG completely took me surprise for its brutality and ghostly images. This was a film that felt like it didn't give a fuck and was trying to go full fucking force on the horror. This kicked things off for me, I wanted more and continued with Ju-On: The Grudge and it's sequel. For those who followed along this month, you'll know that the two Ju-On: The Grudge films are actually the third and fourth films in the series, followed by the lesser known Ju-On: The Curse and its sequel. I didn't initially realize this, mostly because it's not really important to the overall admittedly simple idea of the series, but when I did some time later, I was curious to see how everything fit together.

Before creating my timeline post, I needed to watch The Curse and Grudge films several times over in order to understand their stories, which were presented out of order, but at least mostly in a coherent fashion. It was then that I discovered that two addition short stories were created before The Curse films, stories that directly tied in to the events of Curse. Part of my love for this series came from putting these pieces together in a series that seemed to go no where and never relate to the films before it. I loved this, along with the turned-villain Kayako, who I think of as one of the greatest horror icons, if for her sheer indestructibility alone. And so with a relative understanding, and growing love for, the two short films, the two Curse films, and the two Ju-On Grudge films, I was ready to return to the American trilogy to see how things related.

Every film i've mentioned so far, aside from The Grudge 3, was either directed by or had some involvement with from Takashi Shimizu, the creator of the series. Finding out that he was even involved with the American versions of these films was fantastic to me, and so I expected at least great things from The Grudge 2. With the first Grudge, elements from The Curse films (the teacher affair subplot) and the first Ju-On: The Grudge (nearly all of the film) were used in constructing its story. While differing slightly, with some added content, it mostly works off of what had already been released. While I love The Grudge, I wouldn't place it above any of the Ju-On films (except any of the films released after WG/BG, which I won't be covering here). However, it's still a great representation of its source material, something that can't be said as confidently with The Grudge 2.

Borrowing elements of the school girl subplot from Ju-On: The Grudge, The Grudge 2 otherwise attempts to create it's own new story. But its this new material that falls the most flat for me, essentially any plot that takes place outside of Japan. Now, this isn't necessarily a bad thing, I was actually pretty excited after reading the plot involving an apartment complex being terrorized by Kayako's curse, but where it fails are its characters. The central family, despite being mostly more complex than a lot of families in either series, feel far too hollow and lifeless for me to elicit any kind of emotional attachment to them. And their family drama goes on for far more of the run time than nessesary, at least it felt like it did. This also was the film where they attempted to give some back story to Kayako, making her out to have been evil all along, which completely contradicts any previous film. Good stuff. Anyway, I don't hate The Grudge 2, at least half of the film is actually pretty decent follow up material for a sequel. It borrows nothing from Ju-On: The Grudge 2, which is fine, although that is my favorite film of the entire franchise, so maybe it could have benefited from it.

Speaking on Ju-On: The Grudge 2 for a moment. As I said, favorite film of the series, and that comes down to fucking atmosphere man, another thing i'm a sucker for. This film has excellent suspense, my favorite version of Kayako, a bleak ending, great performances, an insane birthing scene, basically everyone really gets fucked up in this one in a grand fashion. There's not a whole lot else to say on it outside of personal preference. But, imagine if you will taking away all the things that make a movie great. You'd probably get a result that looks a lot like The Grudge 3.

I don't think it's a surprise to anyone that knows this franchise that I would choose The Grudge 3 as the worst of the series. Having little involvement from series creator Takashi Shimizu, I was hesitant to include this in the first place. But hey, why the hell not. Continuing off with a character I didn't give a shit about in the last movie dying about five minutes in, we're given a direct to video sequel that follows none of the elements of the Ju-On films, is told using a linear plotline, and features Halloween costume Kayako in her least threatening performance of all time, stumbling through each scene hoping she can kill off these forgettable characters fast enough that the movie will end sooner. There's an idea about drinking Kayako's blood to get rid of her, doesn't make sense. Nearly the whole film takes place in the same apartment building as The Grudge 2, but all of what little suspense was present in that film is gone here. It's not ominous anymore, it's just a plot device to relate the two movies and, I assume, save money. Yeah so, it fucking sucks.

My opinion remains unchanged after watching these films again, and I suppose if I were to rank them it would go a little something like this: 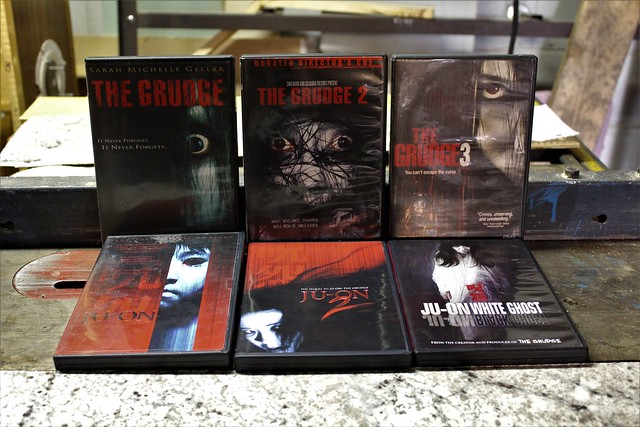 That being said, outside of The Grudge 3, I would absolutely recommend any of these films. They are masterpieces of the genre to me, and far preferable in the debate between The Grudge vs. The Ring. I know this posts runs a little long, so if you've made it here to the end, thanks for listening to me ramble! I'm passionate about your Friday the 13ths and Halloweens, of course, but I do feel that this series could use far more love than it's properly given.

Until next time, later creeps!