B Horror Movie Night: Halloween III: Season of the Witch (1982) 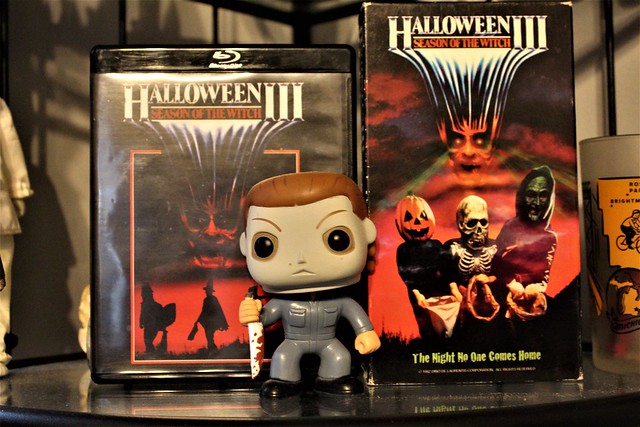 *This post contains spoilers for the film Halloween III: Season of the Witch

Jeremy: For this weeks B Horror Movie Night, we chose yet another film that I, despite the horror community's severe apprehension at this Michael Myers-less Hallloween, actually really enjoy. Yeah that's right, i'd even go so far as to say it's one of my favorite of the series. While not an entirely unorthodox choice (it still has a significant cult following), I can see where the hate comes from. This film easily falls under what The Coven has determined to be a b-horror movie thus far. It's cheesy, it's often poorly acted, the effects are mostly outdated, and the plot is just a bit too far fetched. But it  does all this in such a charming way, that I can't help but love the thing. If I had seen this as a kid, despite Season of the Witch's story basically saying all kids can go fuck themselves, I would have been clamoring for one of those Silver Shamrock masks. In my own way, I think they are just as iconic as Michael Myer's own mask. And they are the front and center image when I think of  when I think Halloween III.

"Did you know...that the infectious Silver Shamrock theme is London Bridges" -@AStallwitz

After the death of Michael Myers in Halloween II, Season of the Witch was created to kick off continuing the Halloween series as an anthology. However, after fan backlash over how they dared to create a film without the signature slasher, this concept would take it's last breath in H3 and quickly die. Look, I dig Halloween 4 a fair bit, but the idea of continuing on to create more films in the style of Season of the Witch (Halloween 4 was originally planned to be a ghost story) would have at least offered the opportunity to get a little more creative. They weren't exactly lacking in slasher franchises in the 1980's. And so, that's what makes Halloween III a unique entry to the franchise, for all its defects. It's what sets it apart that warrants giving it a look without prejudice, not going in expecting just another Halloween. I know i'm supposed to be ripping on the damn thing and how the hell Tom Adkins scored with a girl who hardly looks of age within less than a day of meeting her, but outside of what I could muster during our B Horror Movie Night, I just can't bring this underdog down. Take it out of the confines of the Halloween series, and it's a fun, weird little film about the Halloween season, and its dark origins creeping into modern society. I really couldn't ask for much more.

Sara: The very first time I saw this film I was in college, it was Halloween, and my friend Susie and I were doing homework while having a Halloween marathon that day. Neither of us had seen it, and when it came on TV, we actually stopped to Google it, because we were confused as to why there was no Micheal Myers to be seen. I thought the acting was pretty terrible right off the bat, however, I liked the plot enough to keep getting distracted by it and not do my homework.

It's set in the early eighties, so if course it had its cheese factor; I already mentioned the acting, or should I say, over-acting. Nearly all the characters were one-dimensional, not to mention the story; a bunch of cultists planning on murdering every kid who wears a Silver Shamrock mask while watching a flashing pumpkin on Halloween night-with snakes and bugs. It's completely over the top, however, there is something that is gruesome about watching one of the kids actually die, his parents having no clue on what's going on, trapped in a room together. It's creepy to think that a group of cultists would target a bunch of kids from all over the United States to kill off in a completely disgusting way. But what really makes this movie strangely addicting and terrible, is that there never really is a coherent reason why. It is repeated by different characters throughout the film that this is the "last Halloween" for the Silver Shamrock company, so, obviously once everyone's kids who bought the mask had their brains melted by snakes and cockroaches, their is only one common denominator: Silver Shamrock. So, what exactly was their great plan in all of this? After watching this movie four times, all I can come up with this that these bastards are tired of these kids's shit. All this aside, do I still want one of those masks? Fuck yeah I do. 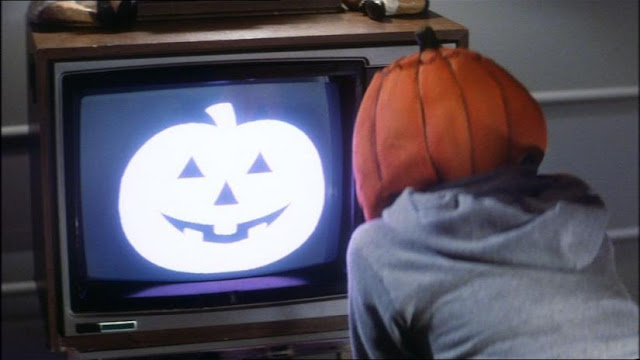 Our next B Horror Movie Night is set for Thursday, May 3rd, and we will be watching Queen of the Damned (2002)-because apparently I have a lady-boner for terrible early 2000's movies. As always, we will be starting at 9:30 EST, so use the hashtag and follow along!

We are also headed out to Motor City Nightmares for the first time this weekend, and are seriously stoked! So far we want to meet everyone, and I am sure we will want to buy everything, so RIP our wallets, but we will bring the camera and do a follow-up post, or two, as well as add to our Instagram story (@FoxyCatCoven) so be sure to follow along there. Also, if you are from MI and plan on attending, hit us up on Facebook, IG, or Twitter! We'd love to meet up with our fellow creeps!
B. Horror Movie Night Media Massacres