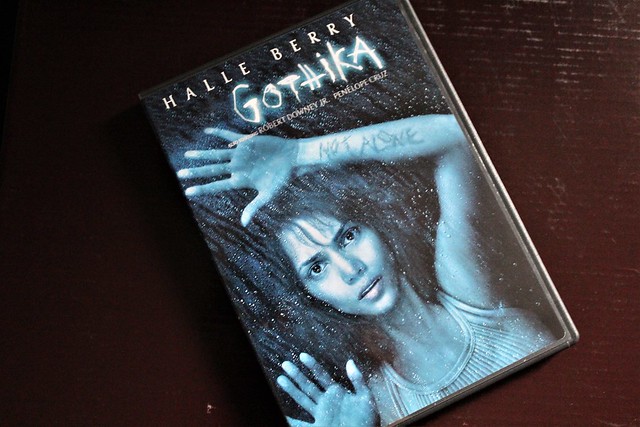 "Gothika. Where being a patient in the mental hospital you worked at is clearly no conflict of interest." @LannieLanners

Sara: Gothika (2003) was my pick on our lastest #BHorrorMovieNight and I will be honest: I couldn't actually remember anything about this movie, other than I really liked it. Our friends Anne and Chris hosted us for the viewing while we all live-tweeted, and after I realized that we were all really engrossed in the film it dawned on me that I might have not picked an actual terrible movie. Whoops. The plot is pretty decent: a psychiatrist wakes up in her own mental hospital under the care of her peer, completely disoriented, and accused of killing her own husband. She has no memory of anything other than almost hitting a girl with her car on the way home from work that same evening, however, she slowly begins to uncover what happened. She has to escape the asylum to figure out the truth.

Starring Halle Berry as the lead actress, with both Robert Downey Jr. and Penelope Cruz as supporting actors, as well as smaller roles by John Carrol Lynch and Bernard Hill, this movie has a pretty solid cast. However, the ratings are all over the place: 5.8/10 on IMDb, 14% on Rotten Tomatoes, 3/4 Roger Eberts. It actually won a Teen Choice Award in 2004 for Choice Movie Actress for Drama/Action.

So what exactly what was it about this movie that made it bad? I think most would blame the plot, because the acting is pretty decent-for the most part-Halle Berry wasn't a bad Catwoman,the movie was just terrible, but that isn't entirely the case here. Anyways, there is a plot-twist that is delivered by John Carrol Lynch's character revealing sinister acts performed in the asylum by himself and his best-friend, the murdered husband of Halle Berry's character that really could have been executed better. His blatant hostility towards her after she is found being the sole suspect of her husband's murder is a little over the top. The entire "selective possession" of Halle Berry's character is a bit on the inconsistent side, but I wouldn't argue bad.

Instead, I found issues in smaller aspects of the movie: the main one being Robert Downey Jr's character. I want to argue that his role in this film was to be the comic relief, because our first scene with him is mostly him being a bit off an awkward goofball in a serious environment.  However, he is supposed to also be the strongest support to the protagonist, but he never seems to be able to shake his goofy grin, even in grim scenes and it just doesn't seem to work at all. Or the fact that a psychiatrist being locked up in the hospital alongside the very patients she used to treat, nope, not a conflict of interest, none whatsoever. There are other scenes that also make this film a bit grimacing like Halle Berry's on-screen husband trying to give her a kiss, but instead looking like he is about to swallow her face whole. Also, a classic scene of all the female patients in the hospital in one, giant, dark shower together, in a rated R movie-only to be carefully shot so that absolutely nothing is shown-just adding a bunch of awkward nonsense to what was a pretty awesome supernatural horror movie. I guess I just wanted this to be the horror version of Girl Interrupted, okay.

Jeremy: I had never seen Gothika before, aside from maybe catching it for a moment on TV. Even after all this, it was a film I never particularly felt like it was going to be essential for me to see. But here we are, one psychological Halle Berry breakdown later. The biggest thing I took from this B Horror Movie Night was that really, despite what the reviewers will tell you, Gothika really isn't all that bad of a film. That's not to say it isn't flawed, or that it doesn't have an abundance of material to riff on, but compared to what we've covered so far, this film actually caught my attention more than a few times.

Like with most any early 2000's psychological horror movie, this film is washed in heavy tints of blue and green, looking like pretty much any music video that was on rotation at the time. It moves along at a relatively fast place, with quick cuts in between each set piece and random freak outs by a majority of the cast. As Sara mentioned, the twist of the whole affair left a shit ton to be desired, despite being at least somewhat unpredictable. Gothika at least does a serviceable job at keeping you guessing as to where things will go next, the problem, however, really lies in the charecters and the mostly horrid script they have to work with. In particular, the sheriff-turned-bad guy delivers some truly awful one liners, while both Penelope Cruz and Robert Downey Jr. feel completely miscast here. But the real star in this flick is truly Halle Berry, who brings a solid and committed performance, making it easier to forgive her "Logic is overrated!" line before delivering the smack down.

We have a surprise for you creeps this week: we are doing a Friday the 13th special post! We are going to watch, then review Friday the 13th part V1, Jason Lives so be sure to check that out Friday night! It's also Ju-on/Grudge month here at the Coven, and we will have a review of all of the movies in both the Ju-on and Grudge film series for you guys at the end of the month. In the meantime, check out Jeremy's time line post to follow along. Lastly, we greatly appreciate all of the love and support from you truly awesome readers. Please give us a like on Facebook, follow along on Twitter, and drop us a comment! Anything horror-related, whatever weird music you are currently into, or even a spooky place you'd like us to know about-we love hearing from you! As always, keep it creepy.