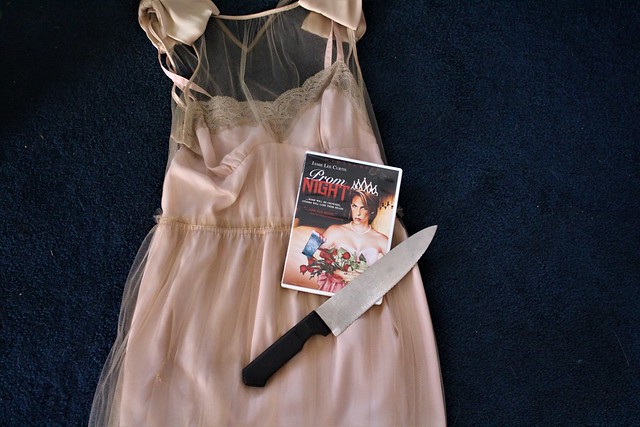 *This post contains spoilers for the film: Prom Night (1980)

"Should have made this into a drinking game; shot every time somebody calls what's going to happen next" -@Mharris_715

Jeremy: This is another "classic" that took me far longer to see than I originally intended. Ever on the back burner as one of those slasher movies I would eventually get to, our most recent B Horror Movie Night would mark my third time of suffering through this travesty. Released smack dab in the middle of Jamie Lee Curtis' original Scream Queen era, Prom Night seems to have been given far more attention over the years than some of her more deserving outings from that era (such as The Fog, Terror Train, and of course, Halloween and its sequel). It's for this reason I chose it as our B Horror Movie watch, the only film from Curtis' horror heyday that I could classify as un-essential

Sara: This movie has soooo many gloriously terrible aspects to it: The weakest plot I have probably ever come by, cliche teenage characters, a kind of epic dance scene, and the most terrific unibrow known to man. The soundtrack was complete, cheesy-eighties glory, and the actors/actresses could have rivaled the cast of Grease with trying to fool the audience that they were all young enough to pass for high school kids. Smoking by the lockers in the hallways was lovely addition, but hey, it was 1980, times were different back then, right?

Jeremy: We joined our friends Michelle and Hassaun at their place this time to share in the novelty of watching Leslie Nielsen (yeah, he's in this one) regret every second of being in this film, and Jamie Lee Curtis giving it her absolute fucking all on the dance floor. The whole film is actually pretty funny. You can tell they were trying to play it straight here, but even with the generational gap, I still couldn't see 1980's me taking this seriously. Anyway, as far as slasher films go, the kills are incredibly uninspired, not gory or creative, and the killer ends up clumsily executing nearly all of them; tripping more times than any of his victims. A seasoned vet, he was not. Prom Night would go on to produce three sequels from here and a remake. None of them i've seen and, from the sounds of it, I can probably die happy never knowing why they thought there was anything else left to say.

Sara: Piggy-backing on Jeremy's comment on the killer: he had zero experience, and was acting on impulse, which explains the deliberate trips, falls, and sloppy kills. One kill in particular manages to chase a girl through several areas of the school, for seemingly twenty minutes, all the while she is screaming her head off and yet no one hears her because of the same song that has been blasting for an hour straight in the auditorium. Every kill scene is predictable, and cringe-worthy-not the way that you would expect out of a horror film. However, the last kill of the movie kinda redeems it with the school's asshole bully's head being chopped off and landing front and center of the prom, causing chaos and panic as expected.

Also, we need to take a moment to appreciate one character in particular: Seymour, or as we so fondly nick-named him, Slick. Slick is a chubby, stoner, kind of hobbit-looking dude who manages to snag a date with a cute girl to the prom early in the movie. He charms her with his lack-of-wit, sexy stoner van, and even manages to get laid! Well, you know what happens if you bone in a horror movie, and lets just say that his kill scene was if anything, comical. He was loved, he will be missed. RIP Slick.

"If this van's a rockin', don't come a stalkin'" -@LannieLanners 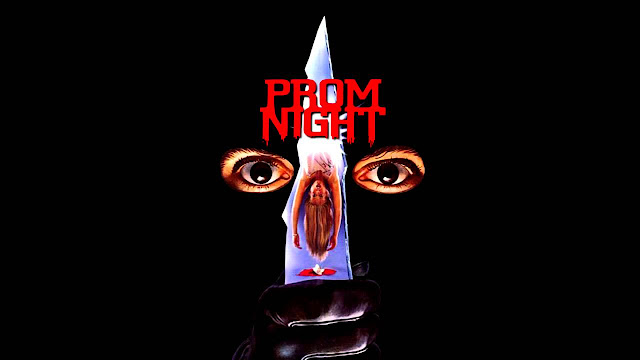 Our next B Horror Movie Night live-tweet is scheduled for April 6th at 9:30 EST, and we chose the terribly delicious Gothika (2003), featuring Halle Barry! It is available to rent on Amazon, and YouTube, there is also a very not-so-quality free version up on YouTube as well, but you didn't hear it from us.

We just got back from this year's Marche Du Nain Rouge today, and it was such a blast! For those of you not in Detroit, we will be doing a post later this week with a bit of explanation on this event and  lot of photos-I have over 500 to sort through, I have a problem. In the meantime, the Metro Times wrote up a pretty cool little article if you want to read up, and we also have a new highlight reel on our Instagram under #NainRouge if you want to check it out over at @FoxyCatCoven.

Thanks to everyone who has been reading these posts, participating in our B Horror Night live-tweets, and showing us love on Instagram. Please do us a favor and like us on Facebook, and don't forget to join our Coven Creeps group right there on our Facebook page to discuss all things, horror, weird, nerdy, and creepy!