Death Metal: Ranking Every Death Record from Worst To Best 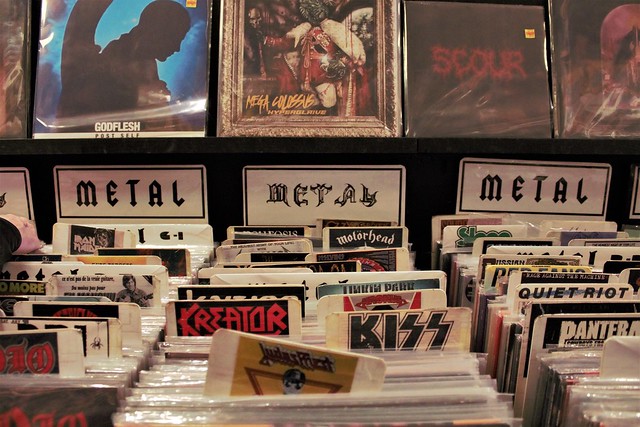 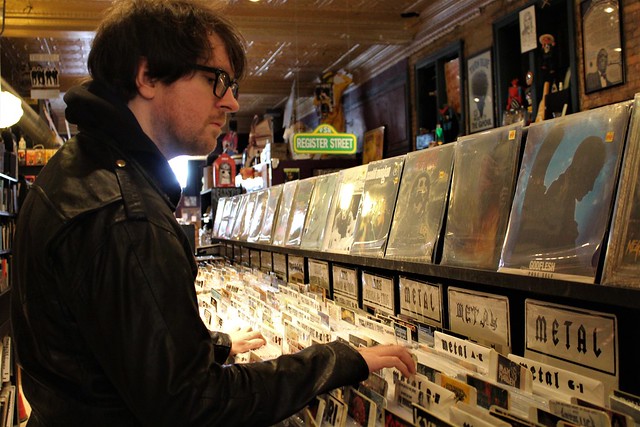 Death's decade of brutal experimentation into the limits of metal glory comprises my personal pinnacle of what music has to offer. Most unfortunately enough, Chuck Schuldiner, the primary force and sole consistent member of Death, had already come and gone from this world by the time I was introduced to his music. There I was, barely out of high school, well-versed in Metallica, Marilyn Manson, and Slayer, but with not an inkling of insight into the death metal genre, save for the stray Cannibal Corpse or Morbid Angel track. For me, my move into the further extremes of the genre began when a friend recommended The Sound of Perseverance as a compromise of both progressive (something I was particularly fond of at the time) and death metal. And it was there my obsession with the band was immediately born, so much so that I must have subsequently listened to nearly their entire discography that same day. Needless to say, almost ten years later they remain my favorite band of all time, and with my love of ranking all kinds of shit, I thought it perfect to give a somewhat informative ranking of their studio albums from worst to best. Save for what I chose in the #7 spot, I don't personally think there's ever been a "bad" album released under the Death moniker. That could be my own bias showing through, but you be the judge as I invite you see how these records stack up.

Included here, as well, I have my best/worst tracks from each album, respectively titled Brutal Honor/Death to False Metal.

Also: I might not know what the fuck i'm talking about, but this is my own opinion, as i'm sure, if you love this band, yours will probably be completely different:

#7: Spiritual Healing (1990):
A truly transitional album in the Death catalog. Gone were the clear horror influences of their first two albums, instead favoring more socially conscious themes; a trait further expanded upon and bettered in every release following. I tend to skip this one frequently, finding many of the tracks to either blend too much into each other or not come off as particularly memorable, despite some excellent lyrics all around (especially on Living Monstrosity and Altering the Future). Other than the title track highlight though, this is where it all starts to fall apart, with Low Life and Defensive Personalities being particular low points. That being said, I don't hate the album. I may not reach for it before any other Death release, but this is still some prime shit, for the most part. At least worth a listen or two for a glimpse into Schuldiner's impressive technical evolution.

#6: Leprosy (1988):
Apart of, along with Scream Bloody Gore and Spiritual Healing, a trilogy of albums I call "The Bloody Genesis of Death", Leprosy represents a huge leap in quality over Spiritual Healing. That's not to say the album is more technically advanced (it isn't), rather this is a clear matter of personal preference: I think the band was more obviously comfortable at the time jamming out heavier, dense chords with Chuck's deeper death growl, all but improving upon their first album, without doing anything particularly new. But that's what ultimately holds Leprosy back for me. While clearly better produced than the previous Scream Bloody Gore, it's really more of the same without the great impact that first record has, especially true for some of the individual songs. When it's good, it's fucking great, Pull the Plug is very often listed as the greatest Death song to exist! But still, of the eight tracks here, four I love, one is pretty decent, and the rest I can do without.

#5: Human (1991):
Okay, i'm probably going to get next to no one agreeing with me here (I almost considered ranking this in the #6 spot) but I have since grown to dislike Human far more than my initial love for it. Perhaps it was being blinded by the excellent Lack of Comprehension, a track that felt so different and awesome, but still retained that signature Death noise, or maybe it could be that this is the first authentic evolution of the band, a leap forward I feel Spiritual Healing tried and failed at. So musically speaking, while its leaps ahead of anything before it, once I got past this I realized, I didn't really care for almost any of the songs on this album. It was though I was listening to something that I knew was great and influential, but it neither spoke to me or made me want to thrash all night to. Flattening of Emotions is my least favorite opening of any Death album, Cosmic Sea is the inferior of the two instrumentals in Death's discography, and I tend to space the fuck out during most of Together as One. Like with Leprosy, this doesn't make Human a bad album, it's a fantastic collection of songs that I just don't personally find the content as appealing to my tastes, or other Death releases.

Brutal Honor: Lack of Comprehension
Death to False Metal: Together as One

#4: Individual Thought Patterns (1993):
Here I have the polar opposite to Human, an album that I initially would've ranked lower, that has grown on me quite a bit with time. Individual Thought Patterns was the final album I listened to by the group. Somehow, I had missed seeing it listed in their discography and wouldn't actually get to hearing it for almost a year later. A true fan. And you know what? I honestly found it pretty forgettable in between Human and Symbolic, like the black sheep during the second coming of Death. This album jumps between the styles of both of those records so much that it makes for a real frantic record that demands you give it listen after listen to really absorb those creative eccentricities. Now, I can say this is where my favorite of Death's albums begin, and where it becomes the most difficult to rank them. But ultimately, I put ITP here because it's still the least focused of what's to come next in my list. It's still a damn close race though, The Philosopher is constantly swapped between my three favorite Death songs, Overactive Imagination is my favorite Death album opener, and at least half the songs here are serious metal masterpieces (save for a few mid-album slogs).

Brutal Honor: The Philosopher
Death to False Metal: Nothing is Everything

#3: The Sound of Perseverance (1998):
The final album, the first I ever heard, and the most un-Death sounding album of them all. In a final move that would lead to the creation of their most progressive record, featuring longer songs and more experimentation, this would also signal a complete change in vocal style. Gone were the deep death metal growls of the early records, now replaced by high pitched screams, climaxing with Chuck's amazing cover of Judas Priest's Painkiller. This is the album I often use to introduce anyone to the band, partially because it's the most easily accessible, the least extreme of the Death records. Of course, that's not to say this isn't some brutal fucking shit, with songs like Flesh And The Power It Holds and the bass-driven Spirit Crusher propelling it to the heights of metal mania. Why then does it not take the top spot? Some of the songs, particularly A Moment of Clarity and Story to Tell end up being TOO long, losing steam often. This is the record you spend a lot of time listening to and taking in, and less time getting that quick metal fix. But listen to this beast, start here and by the time that final note comes crashing down, maybe you'll end up a believer.

Brutal Honor: Flesh And The Power It Holds
Death to False Metal: A Moment of Clarity

#2: Scream Bloody Gore (1987):
It'll become apparent with time here on our blog, but if you know me, you know about my lifelong love and obsession for the horror genre. It's what has led me back to this record on countless occasions. Where Leprosy dealt with horrific themes, it wasn't based off any specific horror films. Scream Bloody Gore literally has a song called Evil Dead and several based off popular Italian zombie films. I know it's novelty, but I live for that shit. This is the album I rock the fuck out to. It's easily the most simple record they've released. In fact, Chuck literally plays every instrument on the album, aside from the drums. And that's okay with me, because Scream Bloody Gore is full of catchy, destructive melodies; it sounds like the end of the world is happening all around you. This is the quick metal fix I mentioned, and it never lets up. I can't say much more than, even if you never listen to another Death record, do yourself a favor and give Scream Bloody Gore a listen. It may not take my top spot (there's still a song or two that keep it from being perfect), but it's damn near close.

#1: Symbolic (1995):
The pinnacle of death metal, a completely perfect record that combines the greatest aspects of every Death record into nine metal masterworks. Lying between Individual Thought Patterns and The Sound of Perseverance, Symbolic focused the frantic nature of the former, without falling into the excesses of the latter to create their only album that doesn't have a single mediocre or even average song. From start to finish, it's completely centered in on its message and the deliverance of thinking mans music. I only wish Chuck could've utilized the same band members for all of his records (Death would have a constant line-up change over the years), as they've never sounded better before or after than here. There's little I can say to convey that this probably the only record where the lyrics aren't novelty, or just badass sounding, they speak messages that are timeless and always relatable. And I wouldn't even recommend Symbolic to a lot of people. Because it takes a good deal of patience to really appreciate and understand. But if you find you can, maybe you'll see why this is not only my favorite Death record, but my favorite metal album of all.

Brutal Honor: Crystal Mountain (But honestly, all of them)
Death to False Metal: None 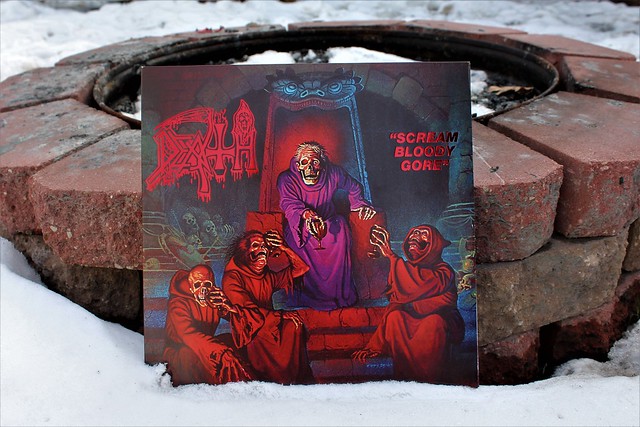 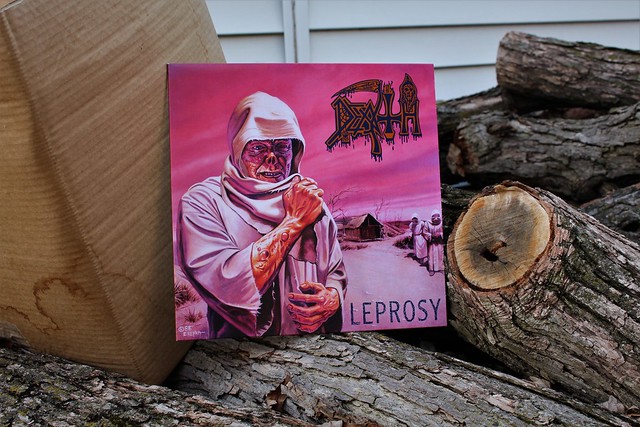 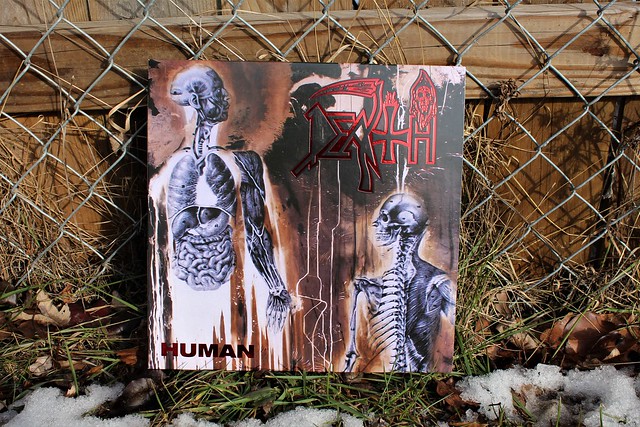 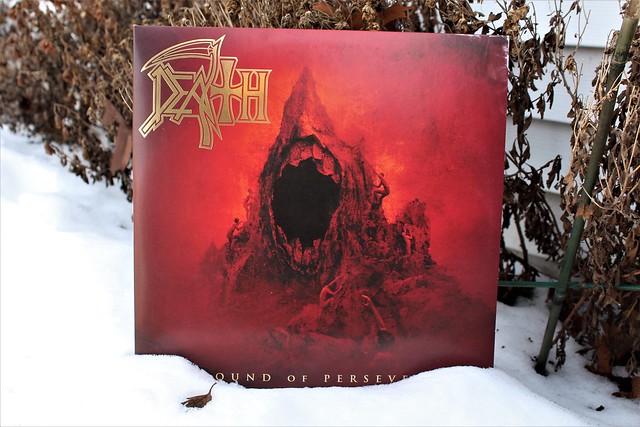 As you can see from above, i've only included pics of the current Death vinyl I own. I started this collection last year when Sara was awesome enough to gift to me The Sound of Perseverance, and it's been a bit slow going. Over time, and when funds permit, cause these bitches ain't cheap, i'll be sure to post an image of our complete collection of the remastered vinyl works on our Instagram. These photos were taken around Ferndale, MI, with the interior shots being taken at Found Sound in downtown Ferndale. What are your favorites? Think i'm full of shit? Leave a like or comment! 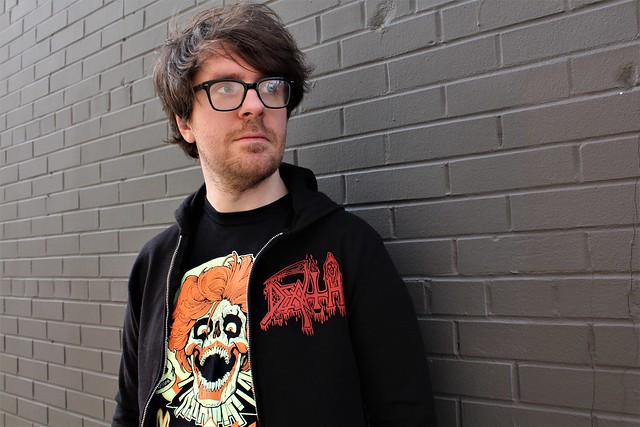