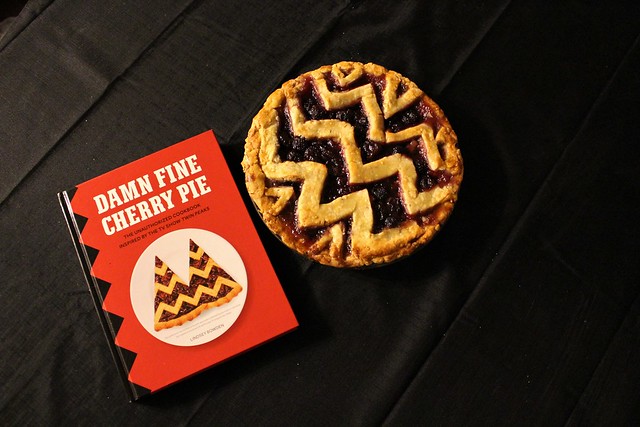 "Dale Cooper: “This must be where pies go when they die."

I wasn't an original Twin Peaks fan. Any mention of it in the years following the original series cancellation, and subsequent prequel film, Fire Walk with Me, managed to fly right by my interest well into my adult life. Despite its massive influence, one that has deeply embedded itself in pop culture television from X-files to Stranger Things, it wouldn't be until Twin Peak's introduction to Netflix in 2014 that I would stumble upon this story of a small town, the mystery of a dead girl, and a near endless supply of coffee and pie.

I've become completely immersed in this phenomenon. It didn't take long for me to begin accumulating an ever growing collection of Twin Peaks merchandise, including what you see pictured above, "Damn Fine Cherry Pie: The Unauthorized Cookbook Inspired By The Show Twin Peaks". I came across this book early last year, and it only took me what, a subsequent year later to finally attempt something out of it? Look, I'm no where near a competent cook, often preferring the company of frozen pizzas and microwavable anything. But I figured, either way, it would at least make a great "nailed it" story if I managed to screw it up completely.

The original show, and its recent 2017 revival, featured a diner (known as the Double R), which showcased a huge variety of amazing looking food. Everything that was featured from the show can be found here in this cookbook. Including, as well, a ton of various recipes based off of the shows many characters tastes and quirks, with several pages even dedicated to diner jukebox selections or how to tie a cherry stem. With so many amazing looking choices, I settled on perhaps the most well known desert in all of Twin Peaks, the damn fine cherry pie. 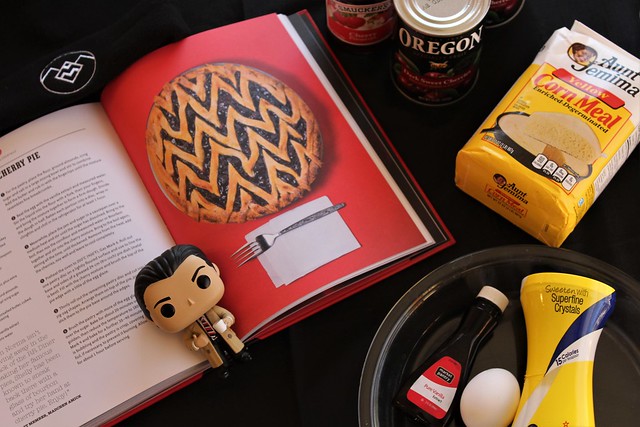 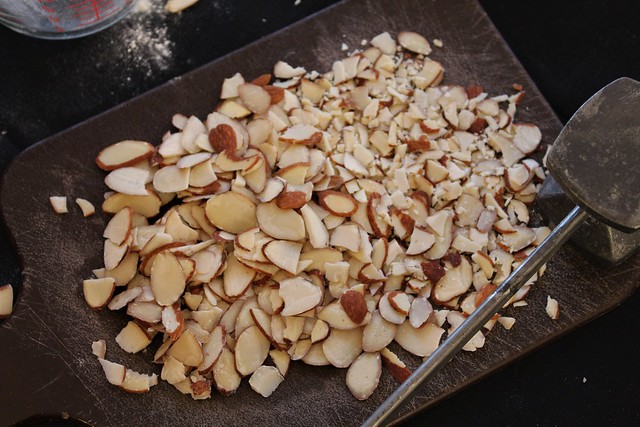 There were several different pie recipes to choose from, but with its distinctive zig-zag lines, I was immediately drawn to this more obviously Twin Peaks-style pie, labeled as Shelly Johnson's Cherry Pie. Pictured above, I also featured the Dale Cooper Funko Pop, perhaps the character most vocal about his love for the delicacy's of the Double R. So, while I almost completely stuck to the recipe it, like many others here that include some eccentric extra flavor additive, called for bourbon to be included, with water as an alternative. I went without the bourbon this time, but I can imagine it would have added an intense boost in sweetness to an, admittedly, already very sweet result. In fact, sugar is the most common ingredient here, requiring three different types in its creation. Now keep in mind, I've never made a pie before, or baked anything not overly simple. So basically, to me, I was creating the ultimate ode to diabetes.

Something I almost immediately noticed is that the measurements, while also listing American counterparts, are primarily listed in the European metric style. This book was, after all, written by a UK fan, a fact that honestly excited me to know that this little show could have such an impact outside of its country of origin. The instructions themselves were easy enough to follow, despite not going into too much detail for any rookie baker.  Needless to say, I had several moments of having to read over something several times in order to get it right (its very much assumed you know what you're doing). Despite these initial difficulties, I loved this approach to learning and felt more confident in my abilities after the fact for figuring it all out. Even if yes, this was primarily helped by Sara's guidance through the process, who was kind enough to assist in just another scheme in my crazy obsession. 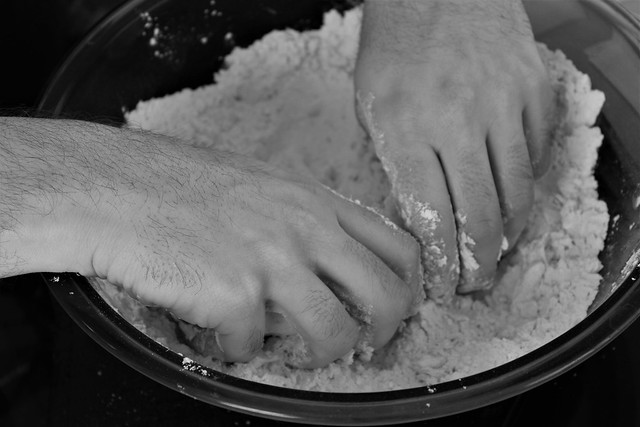 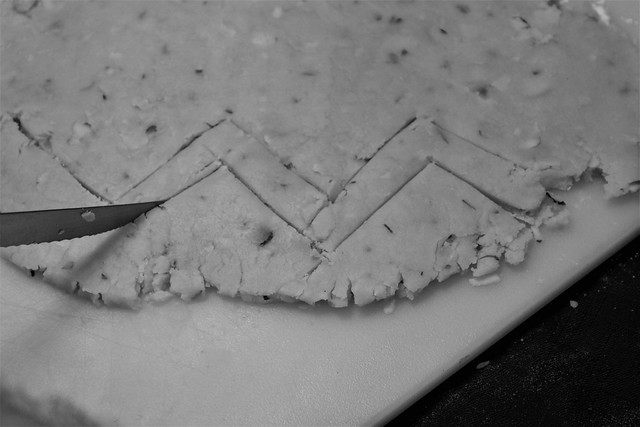 Easily the most difficult step in making this pie (for the both of us, really) was the creation of the zig-zag lines, which were to be placed on top before baking. This may have been due to an error in the creation of the crust, which seemed to easily fall apart whenever lifted, or even cut into shape; as can be seen directly above. This resulted in a "not quite as perfect as the original" shape. But I was ultimately proud that it all managed to not break into a haphazard mess in the end. I would recommend adding a bit more flour (or possibly less butter) than the recipe calls for but, other than that, the flavor was completely perfect and I don't believe was effected either way. I chose to use black cherries, and while the recipe could go anywhere with what type is used, I can't imagine it tasting any better than how it turned out. It really was that good. Maybe I don't know baking, but this was a damn fine pie if I've ever had one.

The whole process takes a little over two hours, which I assume is standard for any cooling and heating of pastries. Aside from the aforementioned difficulty in creating the lines, everything was easy enough to follow through with. Although, if you're new to this whole baking thing, there's a lot of physically moving from once place to another, which was hugely aided by having an assistant not let anything burn. Other than that, a majority of my time spent was mostly waiting. But I recommend making sure to keep an eye on the heating process, as it can be very easy for sticking and burning to occur. In fact, we ended up wrapping the pie in aluminum foil halfway through cooking, which is suggested but not necessarily needed. 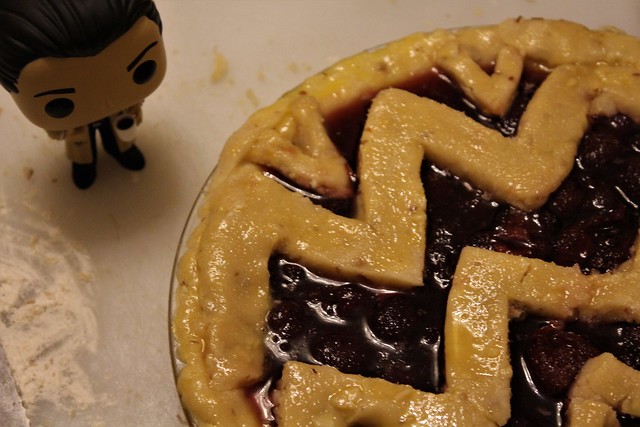 Pictured below is the final result, with a Twin Peaks coffee mug I was lucky enough to find on Etsy. This is the only the beginning for me and the recipes here. While i'd love to make this one again, there's many more I hope to create and bring to our blog. As I've said far too many times already, I'm shit for cooking, but this seems like an amble opportunity to improve upon that. The fact that it relates to an important interest of mine is just an added bonus.

I was originally hesitant to include the actual recipe in this post. This cookbook is an essential item to own, fan or otherwise, and I would completely recommend buying it and giving some of these unique ideas a shot. But, just this once, and as it is the quintessential Twin Peaks recipe, I'll make an exception:

1. For the pastry, place the flour, ground almonds, icing sugar and salt in a large mixing bowl and stir to combine. Add the butter and rub in with the fingertips until the mixture resembles fine breadcrumbs.

2. Beat the egg with the vanilla extract and measured water. Stir the liquid into the flour with a fork, then your fingers, and bring the mixture together to form a firm dough. Divide the dough in half, flatten each portion into a disc, wrap in clingfilm and chill in the refrigerator for at least 1 hour.

3. Meanwhile, place the jam and sugar into a saucepan over a medium heat and stir until the sugar has dissolved. Bring to the boil, then mix the cornflour and measured water or bourbon together and stir into the cherry mixture. Bring to the boil again, stirring all the time, until thickened. Remove from the heat, add the cherries, mix well and leave to cool completely.

4. Preheat the oven to 200 C (400 F). Roll out one pastry disc on a lightly floured surface and use to line base and sides of a greased 24 cm (9 1/2 inch) pie dish. Fill with the cherry mixture and brush the top of the pie edge with a little of the egg glaze.

5. Thinly roll out the remaining pastry disc and cut into long zig-zag shapes. Arrange them on top of the pie, pressing to stick them to the pie base around the edges.

"Cooper: “Harry, I’m going to let you in on a little secret: every day, once a day, give yourself a present. Don’t plan it; don’t wait for it; just let it happen.” 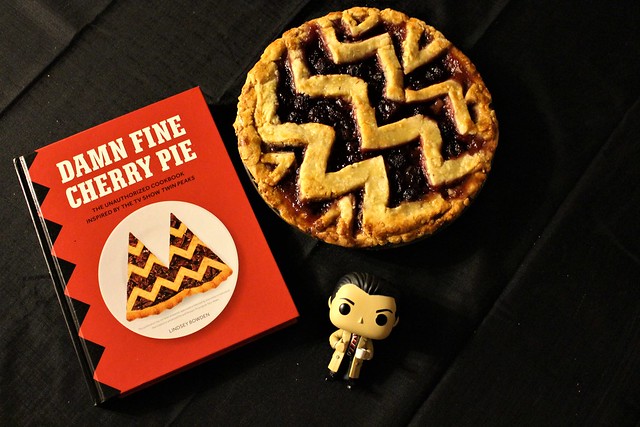 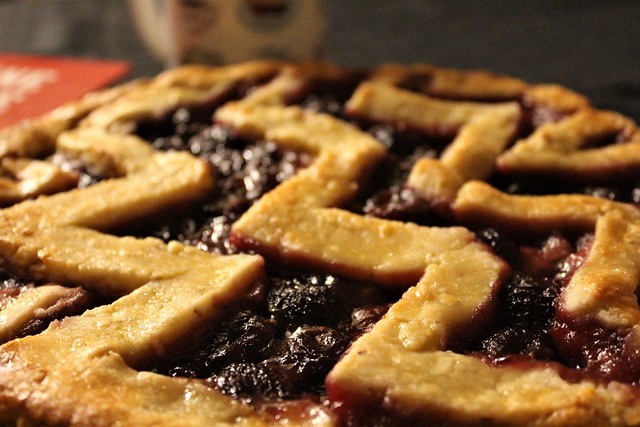 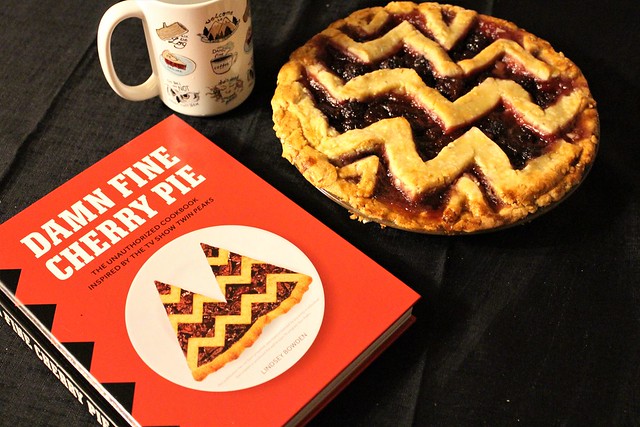