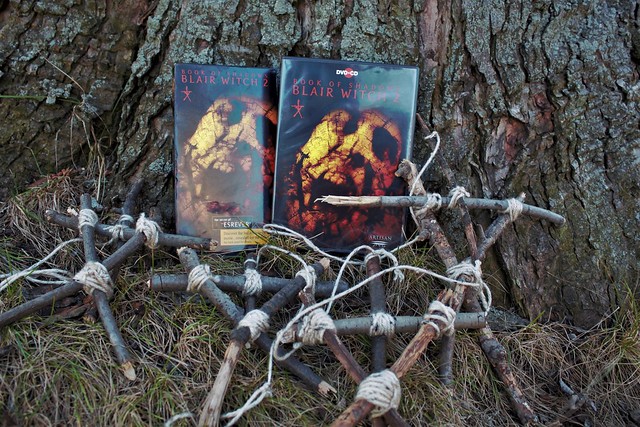 Jeremy: This was my first opportunity to try out doing a live-tweet. It would also be a first for what Sara and I are calling "B Horror Movie Nights", a collaborative watch between us and our readers on one of the many "so bad they may or may not be good" horror movies out there. I suggested Book of Shadows: Blair Witch 2 as the first of many (what we are shooting for, at least) bi-weekly live-tweets to come. Now here's the thing, I love the Blair Witch series, and yes, that even includes this beautiful abomination and the much disregarded 2016 sequel. Even from the start, with the release of the first film The Blair Witch Project in 1999, there has been a significant amount of hate directed towards this trilogy. Accusations that it was no where near scary as critics were making it out to be, you never *SPOILER* saw the witch, and that ultimately viewers felt cheated that the significant marketing campaign to make the events in the film seem real was quickly found to be fabricated. And you know what? I totally get not liking it. These are some flawed little bastards, most apparent with what we're going to be talking about tonight with Blair Witch 2.

Sara: I remember going to Block Buster with my parents in my youth, and the quickest way to tell if a movie was going to be bad was how many copies there were of it on the "New Release" wall. We would always refer to the ones with only one copy as "B movies", but it never stopped us from renting them.

Book of Shadows: Blair Witch 2 was on my radar ever since I saw the very first trailer. I begged my mom to take my friends and I to see it for my 14th birthday, and she sat through this glorious, garbage heap of a film with us. Now, almost eighteen years later, we decided to live-tweet while watching it to share our thoughts on this quality piece of cinema with a post to follow with our favorite tweets from our followers. We have some gems to share with you:

"@LannieLanners: My friend in high school barfed on my shoe right after we watched the first one in the theater. #LiveTweet #bhorrormovienight"

Jeremy: Live-tweeting Blair Witch ended up being an effortless task, as nearly every scene had something to relentlessly riff on. That's the charm for me though, I loved tearing this film apart but at the end of the day, it's my quintessential so bad it's good film. Blair Witch 2 is known as a meta sequel to The Blair Witch Project, that is, it's a film that treats it's predecessor as a movie, while Blair Witch 2 is happening in the "real world". If that's confusing, get used to it, because we're just getting started.

Book of Shadows takes the subdued, building tension of the original film, and chucks it in favor of  blasting some fucking Marilyn Manson and pumping up the gore and nudity factor in what amounted to if Scooby Doo and a death metal band met and decided to make a movie. That's no random pairing, the events that take place are pretty much an R-rated Scooby Doo episode: centered around a whodunit mystery, with a "meddling kids" Colonel Sanders-looking sheriff, and even the casts own Mystery INC van to get around in (AKA The Blair Witch Hunt van). And you know, it's a damn entertaining one because, despite a script that is truly bad, this cast, for the most part, gives their absolute all in their respective performances.

I was one of those people who found Project to be pretty damn frightening. Maybe it was the overactive imagination, I mean I always would swore I saw or heard all kind of things in the film that no one else could, shadows and faces on the walls. It affected me enough as a kid that it still remains as one of my personal scariest films of all time. Book of Shadows, on the other hand, couldn't scare a toddler for all i'm concerned. 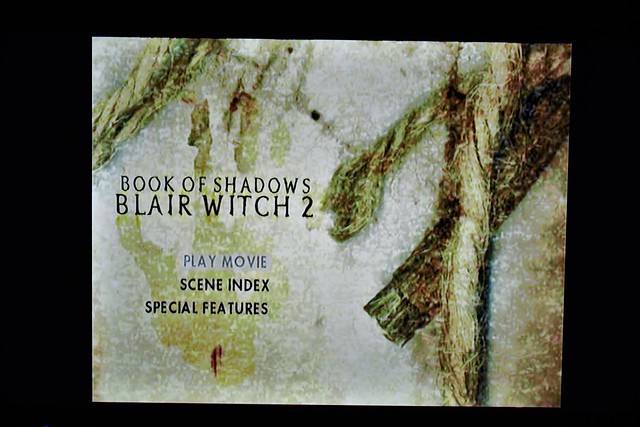 "@LannieLanners: We should have played a drinking game based on the word "man"

However, this movie is one that you can't help but love-to-hate. I don't know if its the fact that situations like the Burkitsville townsfolk's ridiculous one-liner bouts with the community-college drop out versions of the Scooby gang or the terrible overacting, but it is almost as if this movie was on the cusp of being in the horror-comedy genre, but didn't quite make it. Which in turn is why it is so fucking good to watch, because ripping it to shit is your reward for making it through the movie in the first place. I personally have zero qualms with that soundtrack though, it is early 2000's perfection.

Jeremy: I'll have to agree on that point, that soundtrack, while being pretty out of place in what you would have expected from a Blair Witch film, fucking rocks. But as for the film itself, it's a great laugh, it adds to the expansive mythology of Burkitsville, and it makes me want to come back again and again just to hear how many times lead actor Jeffrey Donovan can fit the word "man" into a movie. It comes down to entertainment, and if you're looking for an insane, fast paced look into the cult of the Blair Witch phenomenon, you're getting some decent quality b movie entertainment right here. For everyone else, this is some real fucking garbage, man.